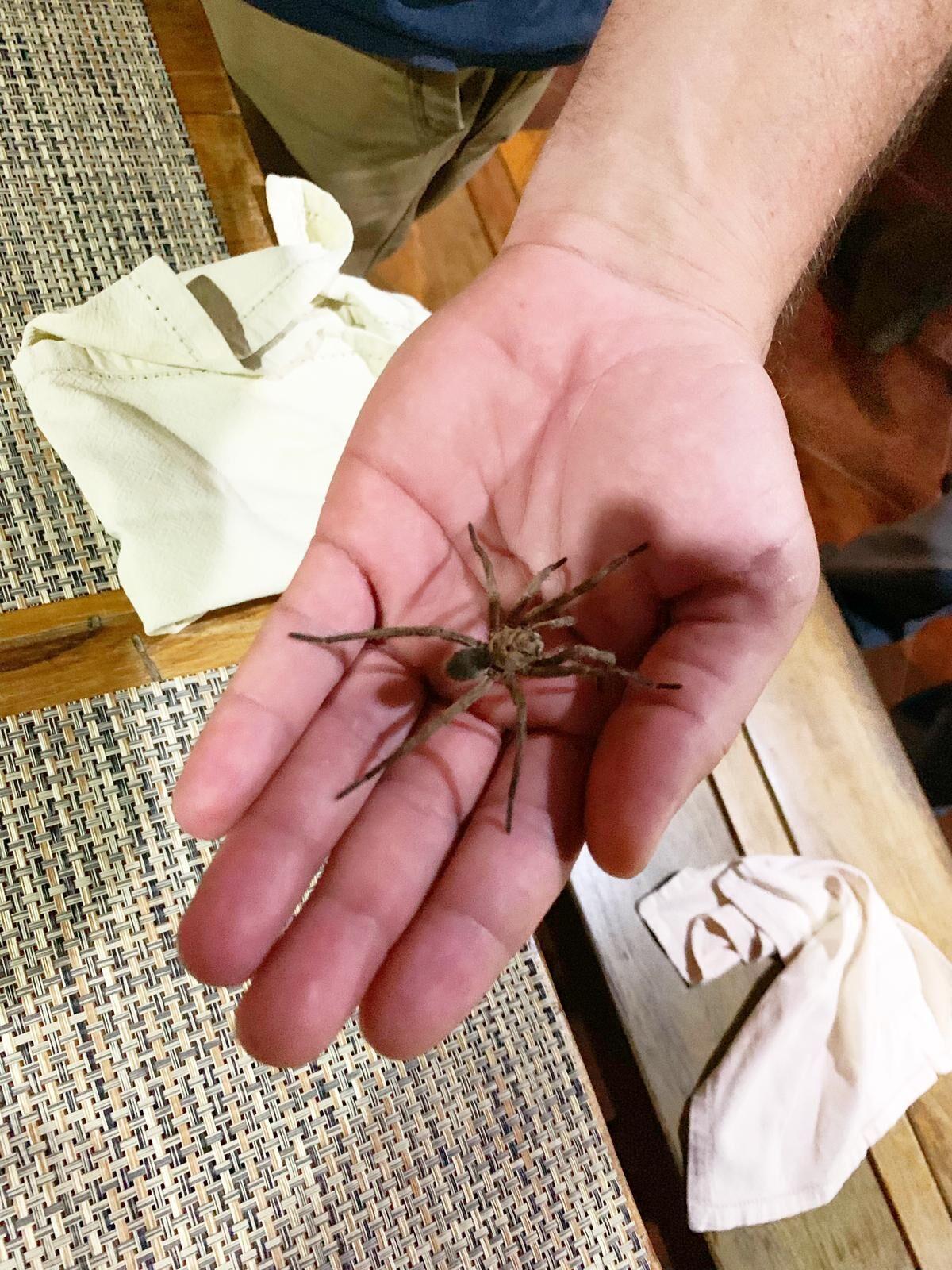 This is the tarantula I made friends with on a hunting trip in South America. 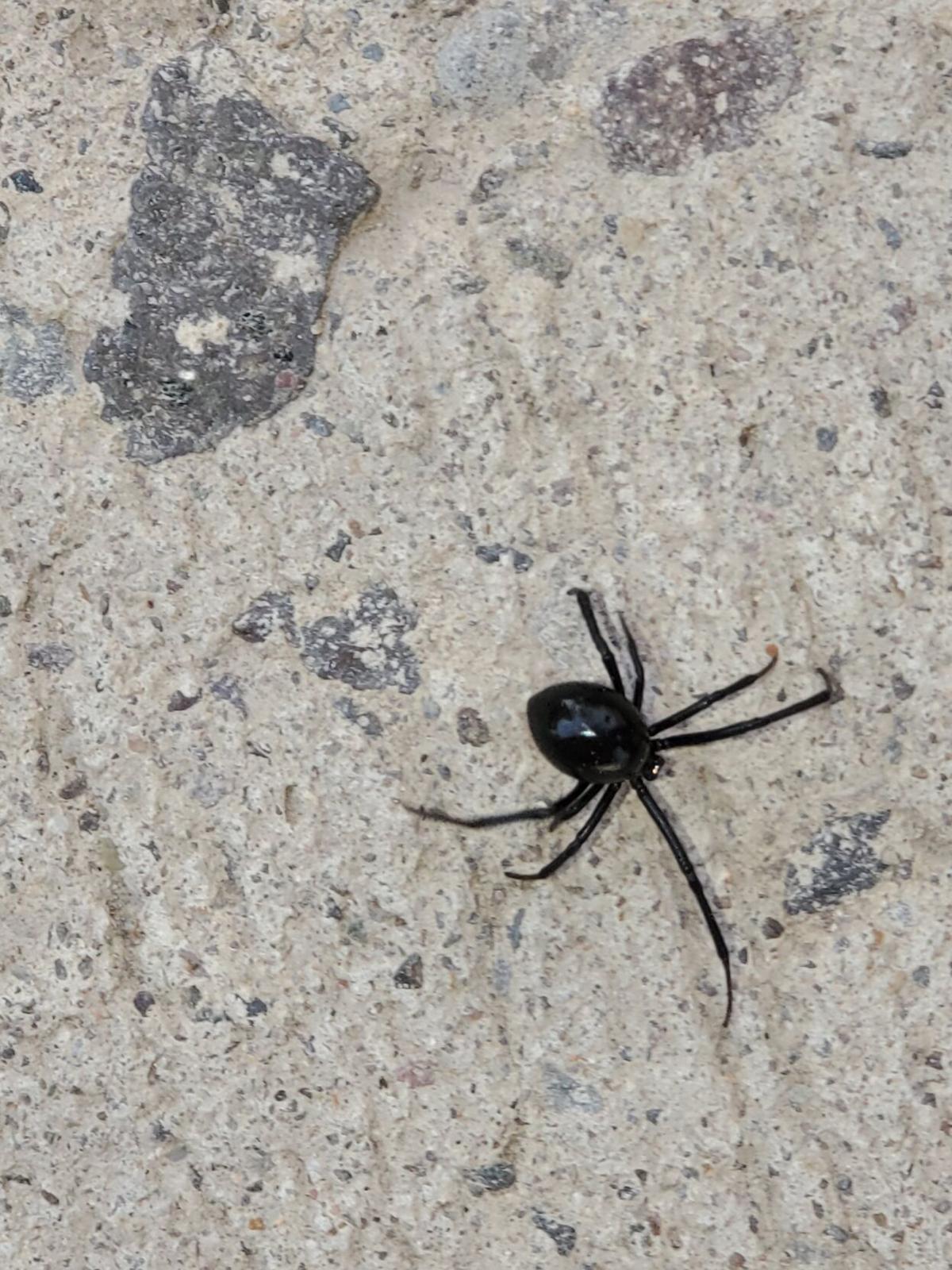 This is the terrorist black widow that had to take the last train west, by order of my wife.

This is the tarantula I made friends with on a hunting trip in South America.

This is the terrorist black widow that had to take the last train west, by order of my wife.

The blood curdling, raises the hair on your neck scream came from the patio area where we have an outdoor kitchen. By the sound, I knew my wife was face-to-face with several masked marauders, an axe murderer, and at least one Tupperware salesperson.

I immediately put on my Level IIIa body armor, armed myself with multiple semi-autos, tear gas, and a pair of flash-bangs, ready to go mano y mano with the potential assassins. “What took you so long?” my wife greeted me.

“I had to get my gear on, where are the perpetrators?” I wearily asked, seeing not a single visible threat.

She pointed to one of the cabinets at ground level and described the domestic terrorist as about the size of a quarter, with eight legs and full of venom. I quickly dispatched the offender and retreated to a quieter place.

I have always had a relationship with spiders, but never afraid of them. I was once bitten in the face by a banana spider in the Florida Everglades, and my face swelled twice its normal size for a week. Nobody seemed to notice.

In South America, I made friends with a young tarantula spider that lived in our camp. He would seek me out and let me hold him in my hand. He was quite friendly, and I even considered bringing him home with me to keep as a pet. I am sure the house management would have vetoed the idea, but it would have been fun to try.

There are approximately 37,000 species of spiders on earth. Nearly every spider you see is poisonous because they all have fangs and venom. The good news is that only a handful of them have venom that is harmful to humans.

The most common species of spider in Colorado, with venom that is harmful to humans, is the western black widow spider or Latrodectus Hesperus.

Another spider we hear a great deal about is the brown recluse or Loxosceles reclusa. Single specimens do occasionally turn up but natural populations are not found here in Colorado.

The female of the western black widow spider is generally round in form with a bulbous abdomen, reaching a length of 1/3 of an inch. They are a very distinctive shiny black or very dark brown in color. The female has venom that is 15 times more toxic than that of a prairie rattlesnake. Only the female is toxic to humans, the male is harmless.

The most distinctive feature of all widows is the reddish-orange hourglass on the underside of the abdomen. The pattern may appear as two unconnected spots and may fade in color, depending on the age of the spider.

The male of the western black widow spider is usually half the size of the female. They are a light brown or gray in color with bands across their body. The male usually has the hourglass underneath, but the color is a more orange or yellow.

There is an old myth that a female widow will always eat the male after mating. This is not true. A female, who is not particularly hungry, will usually let the male leave. Occasionally, a female will eat the male since he is so much smaller, but this is true with most species of spiders.

If a western black widow spider ever bites you, it is very unlikely that you are going to die. The venom is a neurotoxin that can cause excruciating pain in the limbs, tightening of the stomach muscles, facial contortions and sweating. You may also experience nausea, dizziness, chest pains and respiratory distress.

In the event a western black widow spider bites you, the first aid measures you should take are as follows:Wash the bite site with soap and water.

Apply an ice pack over the bite location to help control the swelling.

If the bite is on a limb, elevate to help prevent swelling.

Try to collect the spider in a jar or plastic bag for proper identification by an expert, even if you have crushed it.

If the symptoms become severe, such as difficulty breathing or convulsions, contact 911 immediately and prepare patient for evacuation.

Early treatment is especially important for young children and elderly people. A physician will determine the severity of the bite and may prescribe anti-venom. Persons with a heart condition or other health problems may require a hospital stay.

There are a few things you can do while outdoors that will help prevent spiders from biting you.

Check your equipment to make sure you don’t carry spiders with you. If you store packs, tents, sleeping bags and other equipment in the garage or basement, you may have spiders living in them. Shake out all your gear before you go.

Spray a bug repellent around the perimeter of your tent, as well as the seating area of your campsite.

Shake out your clothes and boots before you put them on to rid them of anything that may have entered during the night.

Be cautious of where you place your hands when reaching for things, especially in dark crevices or other places spiders may live. Always look before you reach.

Fortunately, black widow spiders are not aggressive and will usually leave you alone unless you are near their nest. Being aware while outdoors is the best prevention. I may bring back that tarantula next time I hunt in South America. It would be fun to see how much ruckus the little guy can cause.

Mark Rackay is a columnist for several newspapers and has been a feature writer for numerous sporting magazines. A world-class saltwater angler and an avid hunter promoting ethical and fair chase hunting and fishing, he travels the world in search of adventure. Feel free to contact him on his personal email for questions, comments or story ideas. elkhunter77@icloud.com