The Town of Cedaredge board of trustees and Cedaredge Golf Club Superintendent Adam Conway began planning for the golf course’s irrigation system at a Jan. 12 work session 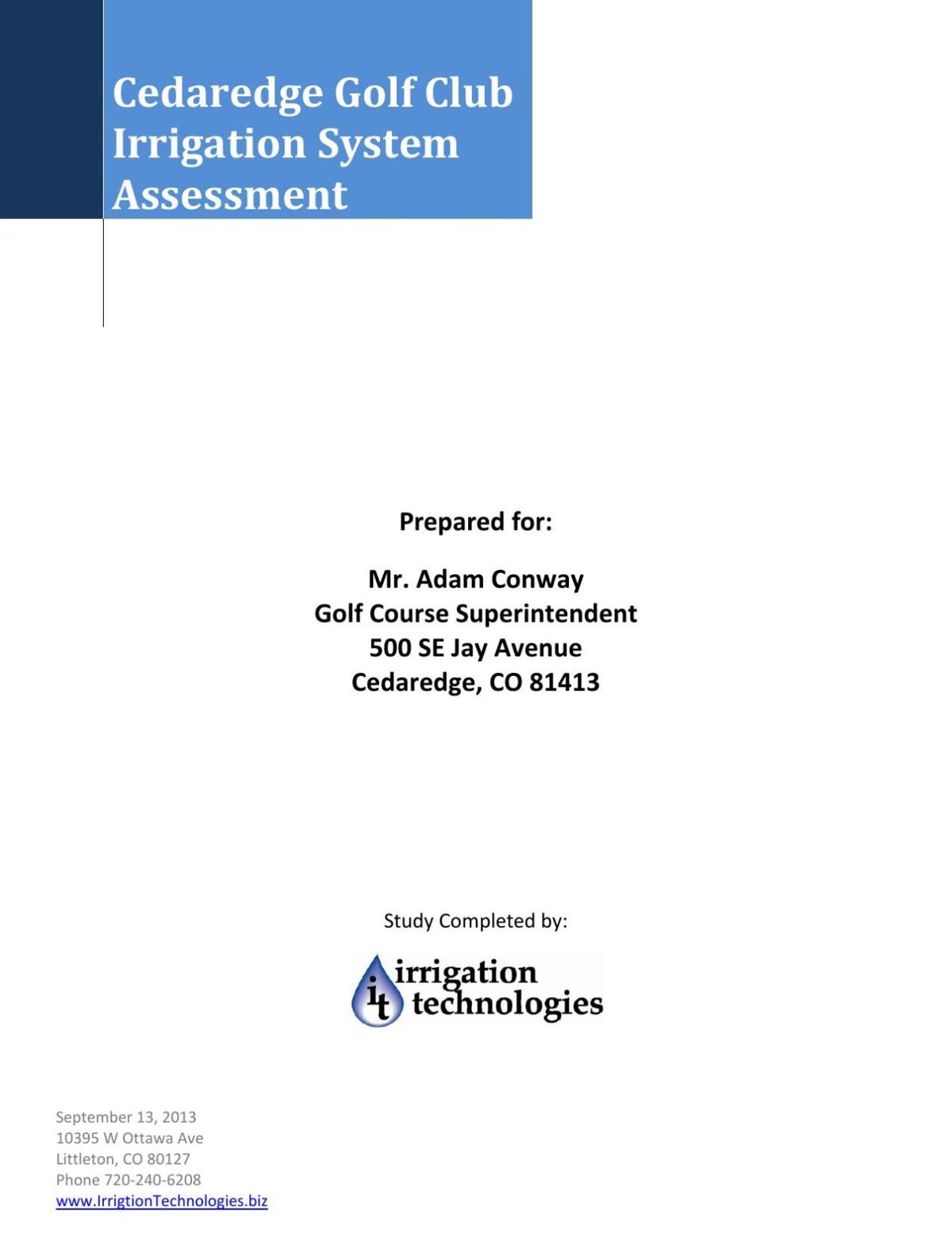 The needs of the course were presented to the board by Conway with information pertaining to a system assessment which was done by Irrigation Technologies in 2013 and the town’s 2018 irrigation masterplan.

In its current state, Conway said that the top priorities for tuning up the course’s irrigation system — with the goal of eliminating the system’s known weaknesses — includes the replacement of the filter, followed by the replacement of the pump. Conway said the two go hand in hand. Following that, he said the course is in need of a new wye strainer.

The current board of trustees, which changed drastically in the municipal election in April 2019, acknowledged that the town has been aware of the golf course’s weaknesses for “a while,” but the 2013 assessment provided specific issues and numbers, narrowing the irrigation system’s needs.

“That’s kind of a good distinguishing point, that the 2013 study was an assessment just to kind of get an idea of where our system was, some of the weaknesses that were showing their age,” Town Administrator Greg Brinck said. “Some notes from staff is that we were fairly well aware with some of the weaknesses of the irrigation system and just really needed a comprehensive study of the system and some access to some specialized technology that the town doesn’t have.”

As indicated by Conway, some of the weaknesses include, but are not limited to, a number of the course’s more than 1,200 sprinkler heads being home made or repaired in-house and not being particularly compatible for adjustment through the computer system. Heads on the front nine are not a good design for the type of terrain at the golf course and are constantly getting plugged with rocks from below.

To previous community suggestions that rocks and debris could be caught by any sort of quick filter, such as chicken wire, Conway asserted, “Anything you have to constantly check is not a good idea,” again referencing the high number of sprinkler points across the course.

“The system is old,” Conway said. “I guarantee you, there’s small micro-leaks and things like that that never surface aside from ones we see, and it’s not going to run as tight as it did when it was brand new.”

The current irrigation pump is reportedly original with the course, Conway’s report said, and has been struck by lightning along the way, sustaining damage that insurance would not cover.

According to Conway, the pump at the Cedaredge Golf Club varies from those of other courses, as its irrigation runs downhill. The pump, instead of being a detrimental supplier of water, is there to boost the pressure and provide a “kick in the pants” to the system.

Conway did say that the overall source point of the water, which is Surface Creek, is less than ideal as well, as they run into issues in getting the water up to the point of diversion when the creek’s level gets lower.

We’ve had issues with people taking our water, building rock dams at the point of diversion to send it a completely different direction — it’s just a mess,” Conway said. “We’re good for a long time, but there’s just so much room for improvement.”

Improvement of the course has become a finicky subject, however, as Conway indicated that the town has gone back and forth on its desires for improvement in the past, potentially burning some bridges with outside contractors who could help.

“Quite frankly, I have cried wolf so many times with these contractors that there’s a lot of them that won’t even come up here anymore,” Conway said. “They won’t kick the tires, they’re done because we have offended them. We have wasted so much of their own personal time putting plans together, designs, only to have nothing happen at all.”

Therefore, he emphasized that any decision to move forward at all with any system improvements should be done with follow-through, to which the board overall agreed.

Trustee Heidi Weissner, for one, brought up the hope that marijuana revenue could boost their budget for the course in the future, though no extra revenue from such a source is budgeted for this year. At this time, the application process for marijuana retailers has not been approved.

According to Conway, there isn’t a severe need to move forward immediately, as the aforementioned outdated and unideal components to the system are still at least functional to the point that the golf course can be managed.

“We can definitely compile a whole list of options, no doubt, but it all comes down to money,” Conway said, but on the flip side, he stated, “We’ve been doing fine for 30 years. We can keep going.”

The 2013 assessment of the Cedaredge Golf Club is available in the meeting packet at cedaredgecolorado.com and is attached to the online version of this article.