The Town of Cedaredge board of trustees approved the town’s 2021 budget as it was presented at the Nov. 19 meeting. The budget is detailed in the DCI article “Cedaredge town budget set for approval Dec. 10.”

With the approval of the budget, the board of trustees approved the attached budget appropriations, which declare the following:

As a formality, the board approved emergency reserves required by the TABOR amendment.

Also as a TABOR amendment formality, the board approved the yearly setting of the mill levy, which ultimately brings no discernible change.

After deciding to table the ordinance at its November meeting, the board voted it into approval at its most recent meeting. All were indicatively satisfied with the clarifications that had been previously requested.

The new municipal code will still bring on an annual $25 fee for businesses and nonprofits that do business for money, such as the Grand Mesa Arts and Events Center and the two nonprofit thrift stores. Nonprofits that do not conduct this type of business will be exempt from the fee, including the Rotary Club, the Lions Club, etc.

With Ordinance 2020-07, the board of trustees also passed a resolution for new licenses and renewals to remain $25 a year, with a fine of $10 for late payments.

Town Administrator Greg Brinck presented to the board a new promotional video for the Town of Cedaredge and the Cedaredge Golf Club. The project was funded by the golf course fund and done by David Jacobson.

Kramer declared the Holiday Open House event a “tremendous success.” They have sold 38 memberships for 2021, 12 of which are new members.

Course Superintendent Adam Conway reported that the turf is decent going into the winter, but he will continue to struggle with irrigation issues overall. Overall, he indicated that he’s optimistic about 2021.

The Cedaredge Golf Club closed at the end of November and is scheduled to reopen on Feb. 1 of next year, weather permitting.

Cedaredge Police Chief Joe Roberts reported a straightforward month of November, but the effort to hire a new officer is still underway. A officer should be hired on Jan. 4 at this point.

The police department is changing its hours due to lack of people who come in on Fridays. New hours, starting after the New Year holiday, will be 7 a.m.-5 p.m. Monday-Thursday.

Public Works Director Jerry Young’s report reflected on 2020, stating that two major projects were completed this year. Those were the rebuild of the Last Chance Reservoir and the upgrade to the backwash valve control.

Young declared the year to be successful from the standpoint of the sewer plant.

Town Clerk and Economic Development Coordinator Kami Collins reported that, as of writing the report, $60,000 had been reimbursed to local businesses and nonprofits through COVID business grants. The grant deadline has been extended and Collins said she is working with an additional three to five entities to assist with grant funds.

The treasurer’s report, like last month, looked better than had originally been planned. As of this point, the Town of Cedaredge has collected 108.3% of budgeted revenues and spent 75.8% of budgeted expenditures.

The golf course’s revenue is 121% of budget year to date compared to last year, and it’s expected that the course will end the year with “substantial reserves.”

It’s expected that total revenues will exceed the budgeted amount by 30% and expenditures will remain “well within budget.” 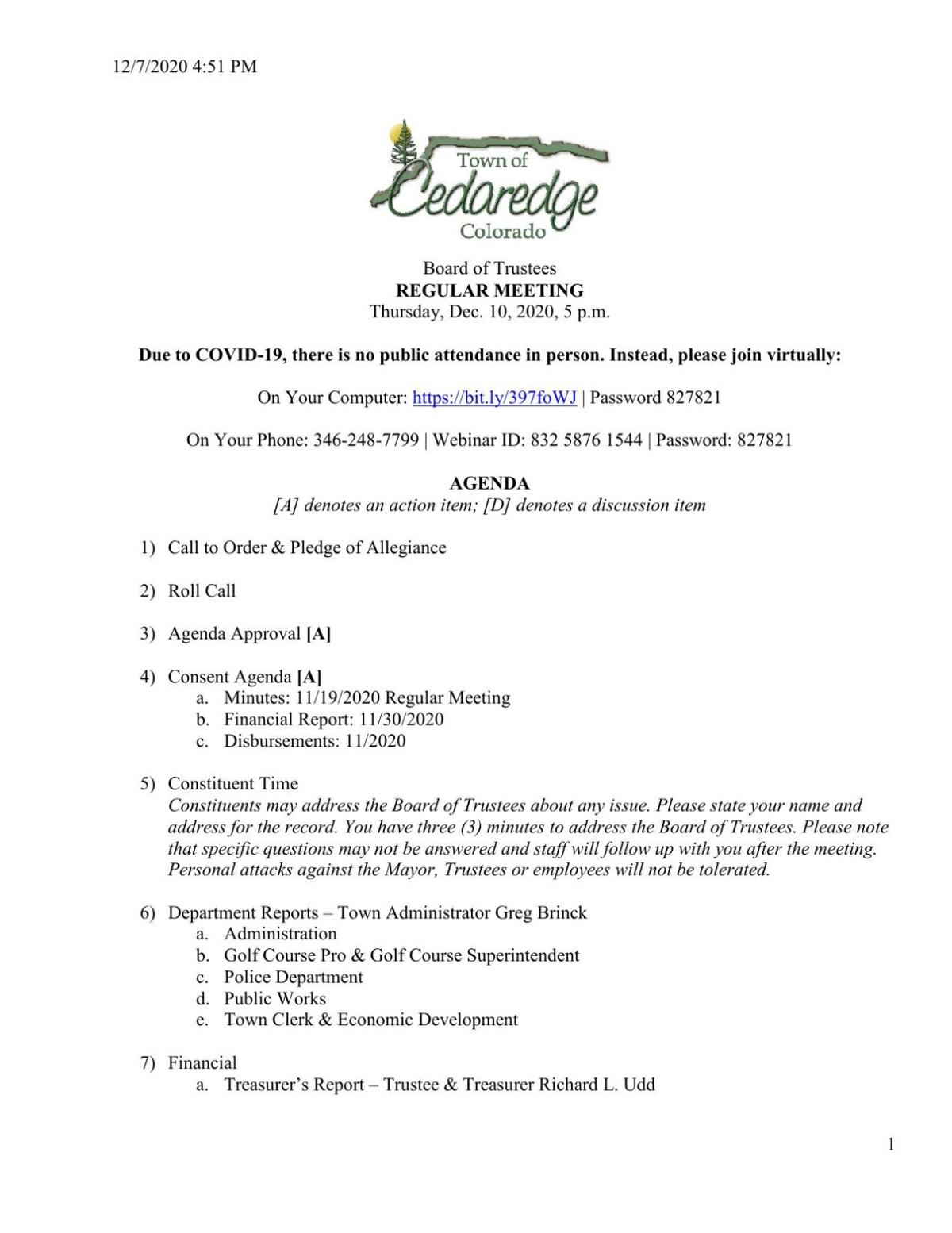