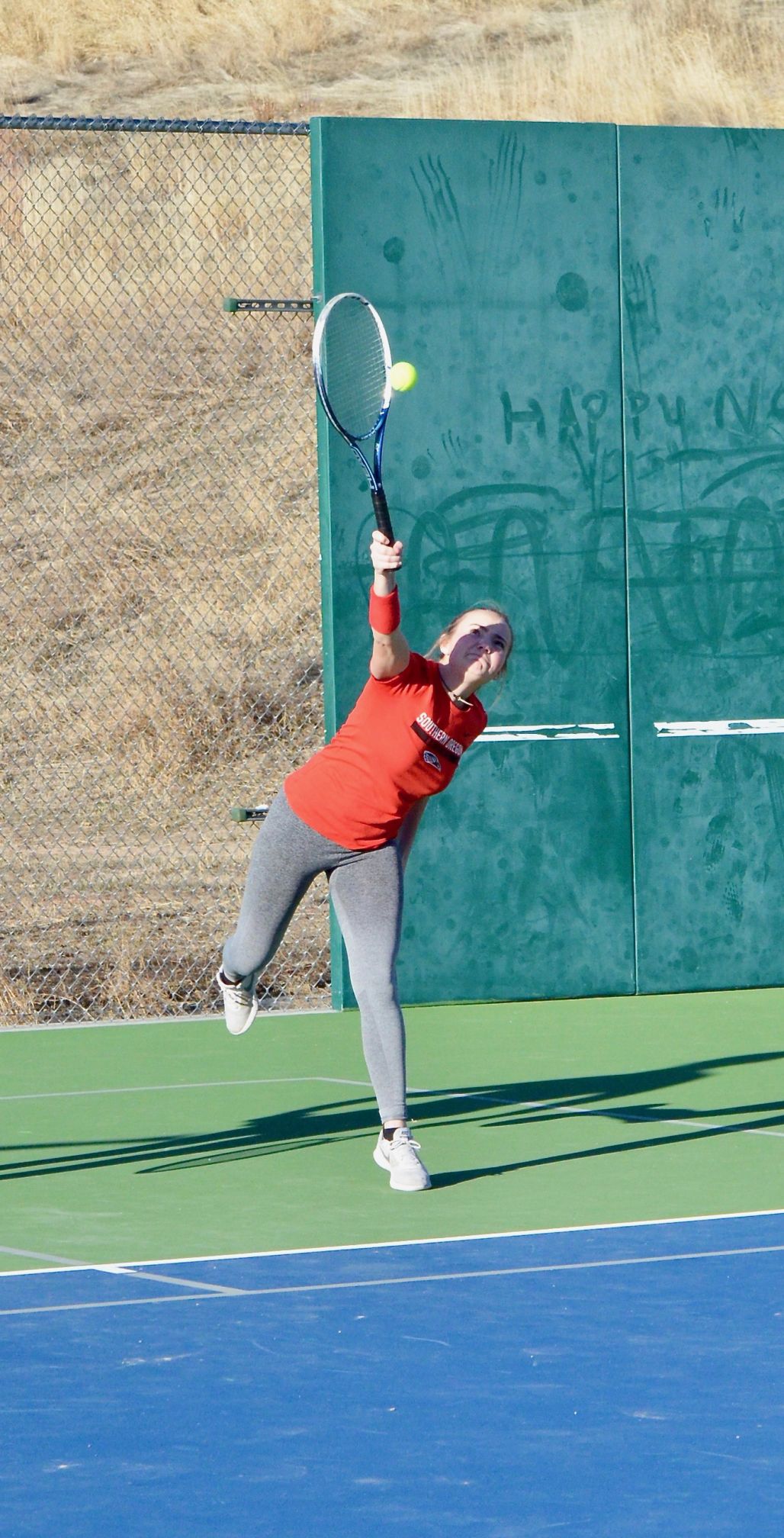 A portion of Paonia High School’s tennis practice is focused on serving nearly every day. The team is hoping to still have a season despite COVID-19 delays. 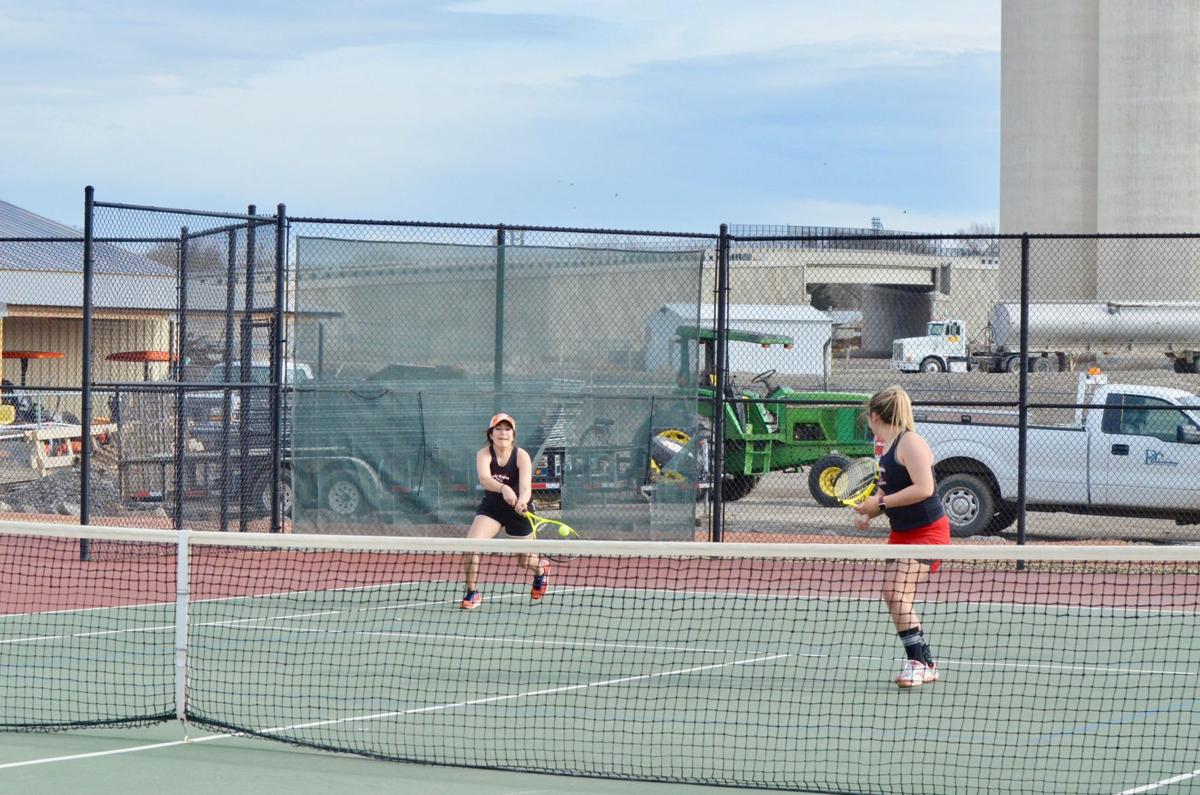 These Paonia High School tennis doubles partners are pictured playing against Delta High School in a match played on March 27, 2019. The 2020 prep tennis season has been suspended until at least April 30, with a deeper suspension possible.

A portion of Paonia High School’s tennis practice is focused on serving nearly every day. The team is hoping to still have a season despite COVID-19 delays.

These Paonia High School tennis doubles partners are pictured playing against Delta High School in a match played on March 27, 2019. The 2020 prep tennis season has been suspended until at least April 30, with a deeper suspension possible.

With the recent closure of schools and the suspension of all spring sports until April 30, the prep sports scene is about to come to a close for a period of time. Before that happens, there are a few spring sports previews to review in case there is some hope of finishing the school year with abbreviated schedules.

Up in Paonia, head high school tennis coach Demara Holt was anticipating a stellar season on the courts with some returning players from the 2019 season to mold a solid team.

With nine returning varsity letter winners from last year’s squad, finding who will fill the four singles positions and three doubles roster is a work in progress as Hotchkiss High School played into March in 2A basketball with several girls from that team beginning tennis practice later than the rest of the team. Most of Holt’s choices for singles and doubles were based on practices prior to the announcement of the spring sports suspensions across the state.

“We have not had any challenge matches to determine any player’s placement on the team yet. We do have several talented athletes who I’m confident will do well in whatever placement they end up,” stated Holt.

Holt touted the play of senior Shay Glaser (Hotchkiss High School) who has played for three years as a doubles player and sees her more than able to make the jump to singles in 2020. Glaser is fast and aggressive. Sophomore Princess Mora (also a returning doubles player, has a serve players might find hard to get to and is another player who will be exciting to watch if, and when, tennis action returns in early April. Also on the radar for an excellent season is senior Sophia Cox who returns as a singles player who has worked hard on her slices and groundstrokes according to Holt.

“We are excited to have a player with singles experience,” stated Holt.

“Part of our success and strategy has always been to play-up their athleticism, speed and scrappiness on the tennis court,” said Holt.

The Eagles have a lot of new girls trying tennis for the first time who have already made huge improvements with last year’s returning players looking very promising as well.

All together, Paonia had 25 girls playing tennis this year. The Eagles also have two new coaches — Annavah Hotchkiss and Jessie Milner — who were powerful tennis players for the Eagles in high school. Holt noted she is in her fourth season as Paonia’s coach, “But these two coaches have already helped improve our team more than I ever could have hoped. We look forward to getting back on the courts on April 6, getting our lineup completed and playing some tennis!”

The suspensions in spring sports had an impact on Holt and her athletes at PHS. “What else can I say except we are very disappointed. The girls were on their way to an amazing season! Since we are not the king of team where girls play year-round tennis (as in the metro areas) at club levels with pro tennis coaches, the high school season is when they grow and improve immensely. We had 25 girls ready to play and it was cut short before we could even get going.”

Smaller schools, such as many 1A-3A teams, rely on summer programs and activities scheduled for their players. “We will try to have some small tournaments and playing time this summer so they (players) can continue playing such a fun, life-long sport. I feel sorry for the seniors. Most of them have been with me for three or four years and they’ve come so far. We were gearing up for some amazing leadership from them. My heart breaks for them,” stated Holt.

This page contains all of The DCI's coverage of the novel coronavirus outbreak, and the illness it causes, called COVID-19.

Because this outbreak impacts public health, our coverage of the coronavirus is available to all readers. Our journalists are working hard to bring you the verified information below. Please consider supporting important local journalism with a subscription. (Click Here)

Are you a Delta County resident who’s been affected by the illness? Send us an email: monicag@deltacountyindependent.com.

Colorado Department of Public Health and Environment official website. CO-HELP is Colorado’s call line for the novel coronavirus (COVID-19). People who have general questions about COVID-19 can call CO HELP at 303-389-1687 or 1-877-462-2911, for answers in many languages, or email them at COHELP@RMPDC.org for answers in English.