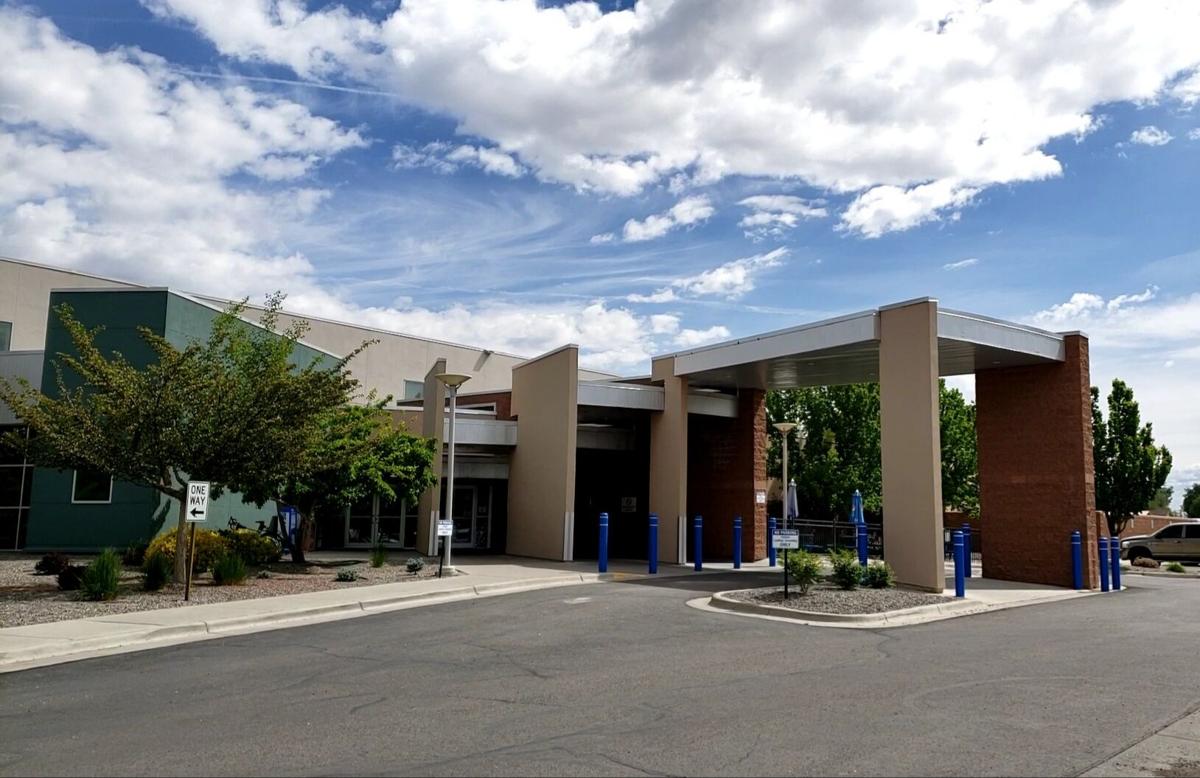 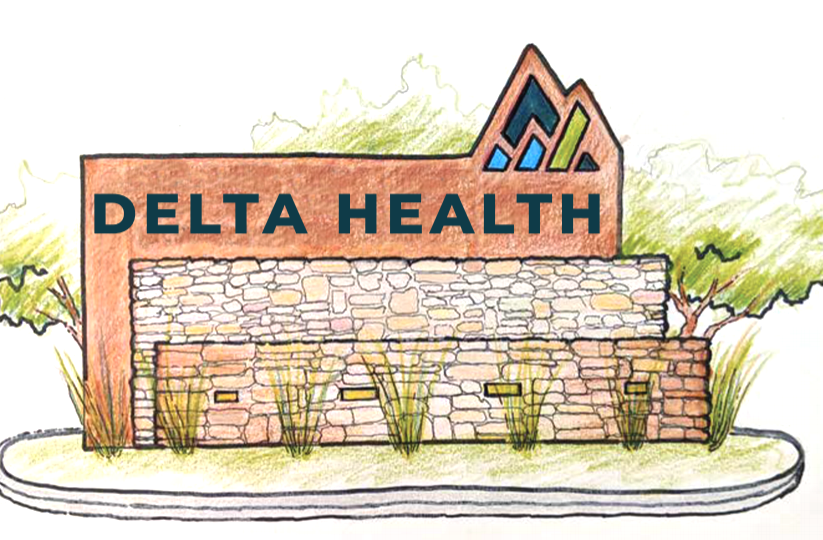 Delta County Memorial Hospital and 13 county-wide clinics will become Delta Health in a few short weeks. The rebranding will bring noticeable changes over the next 12 to 18 months to the historic hospital and its network of clinics. Visual elements including the logo will first appear March 1 on the hospital’s website.

Although a lengthy process with a price tag of roughly half-million dollars, CEO Matt Heyn said the rebranding will be “well worth it.” The scope of the project is both external and internal including new signage and logos for the hospital, clinics, vehicles, uniforms and so much more.

“The purpose of rebranding from my perspective is to set a new tone for the community, a positive tone that our organization is changing in a positive direction,” he said.”I think the real big significant change people will see besides the electronic platform is once we put the monument signs up on the property.”

The new stone/rock signs, still being constructed, will eventually replace the faded signs at the hospital’s entrances. The natural stone will highlight the raw beauty of Delta County known for its abundant wildlife, outdoor recreation and breathtaking scenery.

The rebranding will bring together the entirety of the healthcare system scattered throughout the county, which as been under the auspices of DCMH for several years.

“Historically the community has perceived healthcare here as the hospital and we have so much more than a hospital at this point. We provide health care through the main hospital, 13 different clinics and a home health agency that are spread across the county so, we’re bigger thus the tag line, ‘A County-Wide Healthcare System,’” said Heyn.

The new brand will place the words “Delta Health” before the clinic or speciality name excluding the hospital. Patients can look forward to a streamlined naming system with Delta Health-Family Medicine; Delta Health-Pediatrics or Delta Health-Oncology.

Marketing Director Jacqueline Davis said it’s important in the rebranding “to indicate that services are more than the hospital.” She said they include all of the community clinics under the hospital’s umbrella including Delta, Surface Creek and the North Fork Valley.

“Right now we’re a system that’s full of brands instead of being a branded system,” Heyn said, adding that it’s important for folks to see the wide variety of healthcare that DCMH has historically offered and to get “credit for it.”

The crown jewel of the healthcare system will always be the hospital, no longer to be Delta County Memorial Hospital but rebranded simply as Delta Health.

No matter the name, many will recall the humble history of healthcare in the valley with the first hospital in Delta built on Leon Street in 1913 with a total of six beds. Next came the first community, non-profit hospital in 1920 as part of the Western Slope Hospital Association. Years later, Delta County Memorial Hospital was established in 1949 with a new facility at 1102 Grand Avenue with 1,200 square feet and 28 beds.

In 1975, the Delta County Memorial Hospital District was formed and a new $1.7 million hospital was constructed at its current location at 100 Stafford Lane. Named Delta County Memorial Hospital it occupied 30,000 square feet and 32 beds. In 1982, the hospital grew another 30,000 square feet and had 49 beds, a chapel, medical records, admitting, business and administration offices.

Now the hospital is taking a bold new step with a reimagined logo that is shaped both like a DELTA (fourth letter of the Greek alphabet) and a majestic blue mountain peak.

The logo colors are both significant and symbolic with dark blue in the apex of the DELTA sign representing the county’s numerous mountains; two light blue dashes below the mountain on the left highlight the two rivers that have their confluence in Delta; the longer light green dash rising through the blue mountain is the Grand Mesa signifying “to go” with hopes of propelling Delta Health into a new era of health care.

Overall, the new logo is that of a delta, and all of the individual pieces come together representing Delta County as a whole.

Beneath the eye-catching logo element the capitalized words “Delta Health” stand proudly above a fitting tagline, “A County-Wide Healthcare System.”

Hyen said the new design means little without what he called the “meat and potatoes” of the design which include the organization’s updated mission, vision and values.

Delta Health’s new mission — To inspire hope by providing remarkable care in a healing environment. Its vision — To provide compassionate quality healthcare that our community will trust. And its values are expressed in the acronym INSPIRE: I- Integrity, N- Nurture, S — Stewardship, P -Professionalism, I -Innovative, R — Respect, E — Empathy.

“There’s a lot rolled into a rebranding not just from a work stand point but from thought stand point, and if we were going to do that; which we ultimately did, then we needed to have mission, vision and values that followed,” Heyn said.

“Those are a part of our strategic plan as well. We feel like if we are going to be the best then we need to have those things in place as well so we are working on all aspects for change.”

Heyn noted that all of the rebranding, logo, tagline mission, vision, values and goals have been a part of the hospital’s carefully thought out three-year strategic plan.

Heading toward a bright future, Heyn said Delta Health has set two lofty goals in the areas of patient safety and satisfaction. The goal first is to become a Center Medicaid and Medicare Services (CMS) Five Star Hospital. The second goal is to obtain Leapfrog grade A status.

The hospital currently boasts a four star CMS rating but has struggled over the years with its Leapfrog rating. The hospital posted a consistent string of “C” grades but then hit a disappointing “D” grade last fall. The last time the hospital reached an “A” grade was the fall 2017, something Heyn is determined to bring back to the hospital.

“Part of the problem is that if we have a poor Leapfrog score, that’s based on data that’s a year old,” he said, adding that going forward Delta Health will focus on making vast improvements in the area of safety and satisfaction.

“When they post the Leapfrog score for 2022, it’s going to show improvement,” Heyn said with absolute confidence.

When addressing the hospital’s past, Heyn said the organization is learning from it, but it won’t let it define the future. He said the goal is to improve on the past with quantifiable measurements that will serve to strengthen Delta Health.

As for the unveiling of the new Delta Health brand in just a few weeks, Heyn said everybody’s excited. The marketing department led by Davis reached out to staff on the logo design and 90% agreed on the logo with the delta symbol, mountains, rivers and mesa.

“I am really excited. I feel like it modernizes the organization and pulls us into 21st century health care. The community will see a change in the overall way that healthcare is provided as they witness the change in our brand,” Heyn said.