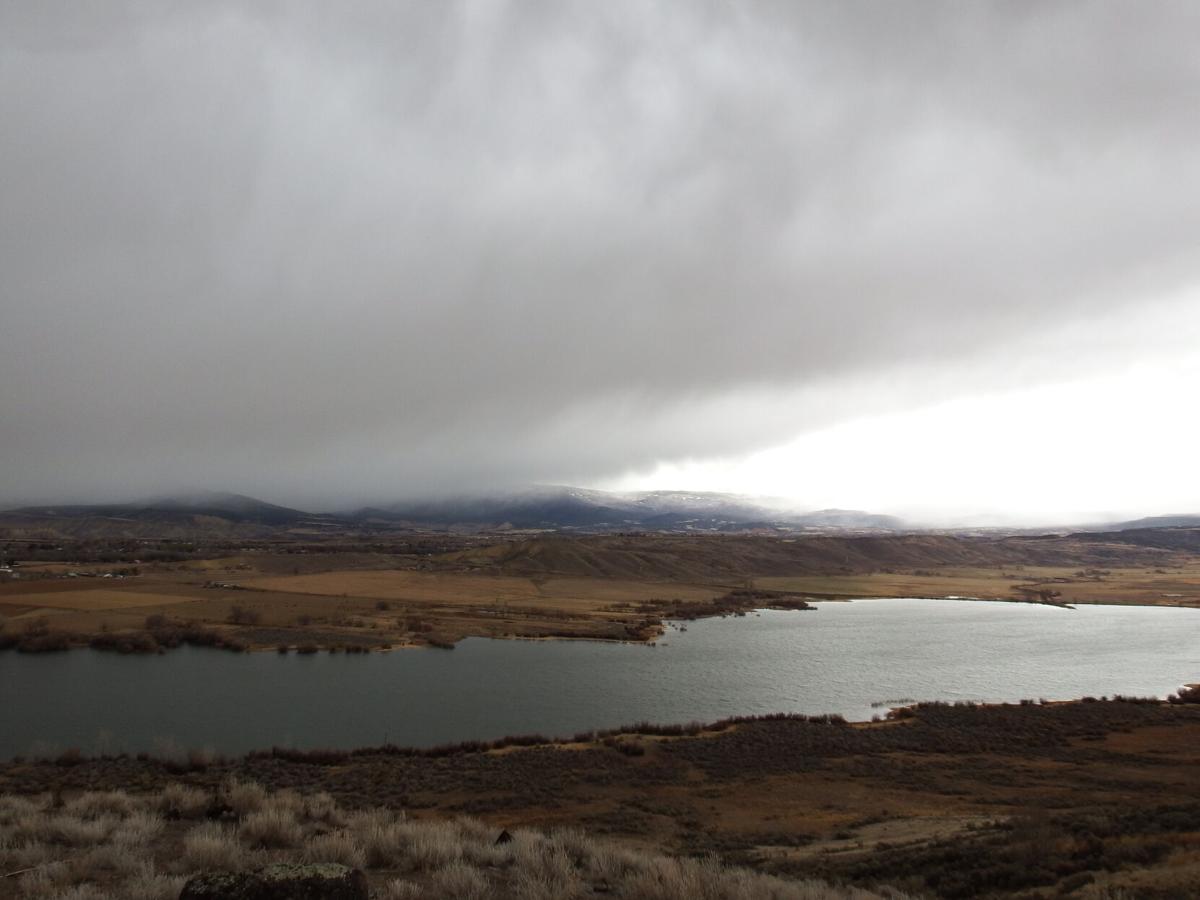 The water levels at Fruitgrowers Reservoir fluctuate dramatically. The water was high in this March 2018 photo, but the reservoir drained completely in Sept. 2020, killing fish and leaving a foul smell. 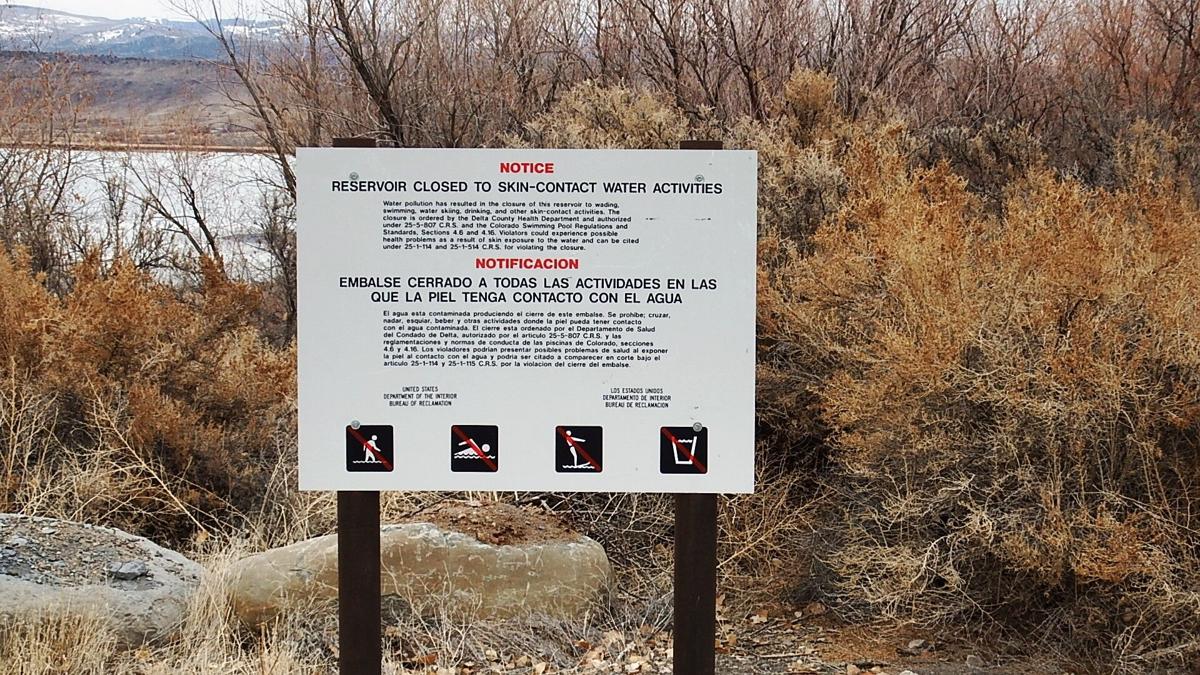 Notices at Fruitgrowers Reservoir, east of Eckert, warn that “Water pollution has resulted in the closure of this reservoir to wading, swimming, water skiing, drinking, and other skin-contact activities.” The Delta County Health Department and the U.S. Bureau of Reclamation posted the signs in 1989.

The water levels at Fruitgrowers Reservoir fluctuate dramatically. The water was high in this March 2018 photo, but the reservoir drained completely in Sept. 2020, killing fish and leaving a foul smell.

Notices at Fruitgrowers Reservoir, east of Eckert, warn that “Water pollution has resulted in the closure of this reservoir to wading, swimming, water skiing, drinking, and other skin-contact activities.” The Delta County Health Department and the U.S. Bureau of Reclamation posted the signs in 1989.

It’s been months since the smell of rotting fish permeated Crane Lane and other points adjacent to Fruit Growers Reservoir, but people living near the site east of Eckert, still remember the stink. In a Sept. 20, 2020, email addressed to the Bureau of Reclamation, a concerned resident reported “a horrendous odor coming out of (the area) for the past five-seven days.”

“Due to the current drought, Fruitgrowers reservoir was drained by Orchard City Irrigation District to meet their irrigation demands. This is not a normal occurrence but does happen every once and awhile during a drought or during a dam safety inspection. In recent history, it happened in 2011 and around 2002. Unfortunately, the smell is coming from dead carp in the reservoir. We expect the smell will begin dissipating in the next week or so depending on weather. Hoping for rain and cooler temperatures.”

Contacting the bureau was a logical step, especially since that federal agency was responsible for constructing the reservoir’s new dam in 1938 after a less-sturdy structure failed the year before. The flood of June 13, 1937, was big news in Colorado, landing on the front pages statewide.

The old dam cracked open on a Sunday afternoon, but there’d been ample warning of the imminent disaster. Men and machines began laboring on Saturday to reinforce the cracking structure, while residents in the path of the impending flood took to high ground, saving what belongings, vehicles and animals they could. When the dam broke, 3,500 acre-feet of roiling water cascaded down a ravine. The flood inundated the town of Austin as well as neighboring farms and orchards. The deluge also washed out 100 yards of Denver and Rio Grande Railroad track.

Residents of the flooded town as well as a host of onlookers from other parts of the county stood on high ground to watch the dam break. Downstream from Austin, several individuals lined roads, bridges along the Gunnison River to see if the passing current would rise as the Fruitgrowers flood poured into the larger water. No lives were lost, but the damage to structures and crops was economically devastating.

Austin and the county survived and a new dam and appended spillway soon restored the reservoir to its vital irrigation mission. Wet years followed and, in addition to supplying much-needed water for farms and orchards, the reservoir became a recreation destination. A 1981 report by the U.S. Department of Interior boasted that, “In addition to irrigation, the reservoir provides recreation for a significant number of visitors each year. Boating, fishing, and swimming are popular pastimes at the reservoir, and over 4,000 people visit the site each year.”

But the reservoir’s recreational potential came to a halt in 1989. That year, a May 14 article in The Daily Sentinel announced that the Bureau of Reclamation had closed Fruitgrowers to “wading, swimming, waterskiing, and other activities that involve skin contact with the water.” The reason for the closure given by the Bureau’s Grand Junction Projects Office was water quality samples taken from the reservoir indicating “high quantities of coliform bacteria. Coliform exists in the waste products of all mammals,” the article stated, “and is an indicator that other organisms may be present. The small amount of inflow to Fruitgrowers Reservoir allows potentially harmful bacteria to collect and, in turn, creates a health hazard for anyone who might come into contact with it.”

Warning signs went up that year and Fruitgrowers never returned to its heyday as a recreation site.

Bad for Swimming and Fatal for Fish

Responding to DCI inquiries, bureau public affairs specialist Liff explained that, in 1989, “The reservoir was closed to skin contact water activities by the Delta County Health Department. We support this closure for public health and safety reasons. The smell occurs occasionally when we have low water drought years due to dead carp. There is an issue with oxygen levels in the water, especially later in the season when water is low and temperatures are high, algae and other water plants also use the oxygen, and that may kill the fish maybe before the low/no water kills the fish.”

According to Liff, vandalism caused the bureau to post new warning signs in the spring of 2015. The reservoir remains off-limits for water recreation, but — over the years — fresh water carp have found a way to survive and multiply only to perish.

These days, because the region has experienced nearly two decades of drought, the unfortunate fish are doomed to either a slow death or a quick one. The fish die gradually if the reservoir drains slowly, or all at once if the last of the autumn water is released quickly, as was the case last September.

As if low irrigation flows, recreation restrictions and dying fish weren’t sufficient to mar the legacy of Fruitgrowers Reservoir, upstream mishaps caused a dustup between the Town of Cedaredge and Orchard City — a statutory town which encompasses the communities of Austin, Cory and Eckert.

The DCI was unable to locate a copy of the 2012 EPA report cited in Lohmeyer’s article and Delta County Health Department personnel were unable to shed light on their role in the reservoir closure. One newspaper account suggested, without attribution, that a past accidental spill in Cedaredge may have sent as many as 800,000 gallons of raw sewage into the reservoir.

The waste from various spills allegedly reached the reservoir via Surface Creek which feeds Alfalfa Ditch which, in turn, flows into Fruitgrowers. In the wake of the spill, Colorado regulators ordered Cedaredge to upgrade its sewage system. The town was using a lagoon system at the time of the spills, which was economical but subject to contamination and occasional leakage.

In the wake of a particularly sizeable spill, Cedaredge embarked on a study to upgrade its systems. The town cleaned up its treatment process, even winning an EPA award in 1999 as the “most improved” facility in the nation. And yet, downstream users remained nervous.

Cedaredge’s population was steadily increasing and its treatment facilities were operating at near capacity. According to an Aug. 17, 2000, article in The Daily Sentinel, the town admitted that it was contributing perhaps 11% of the pollution which made Fruitgrowers Reservoir unsuitable for water recreation. But the town also maintained that other sources, including bird and animal waste, were contributing the rest. Speaking for the town, Cedaredge administrator, Jerre Doss, declared that the town preferred to get its effluent completely out of the irrigation drainage.

While Cedaredge labored to upgrade its treatment facilities, another fish-kill incident in 2007 caused Orchard City residents to criticize, not their upstream neighbors, but their own water managers. As reported in an Oct 7, 2007, issue of the Sentinel, a faulty measuring gauge caused the reservoir to drain precipitously with the result that fish died suddenly. And not only in the reservoir proper, but also far afield, as rotting remains ended up in downstream ditches, spreading the smell far and wide. Another fish kill had taken place in 2006 when the reservoir ran dry and that situation was also attributed to local mismanagement.

Whatever Cedaredge’s past role in contributing to the woes of Fruitgrowers Reservoir, those concerns were laid to rest in May 2016, when the town unveiled its new multimillion dollar treatment plant. A June 2016 DCI article put the cost at over $4.9 million for a state-of-the-art plant which houses modern pumps designed to send up to 360,000 gallons of fully treated water 400 feet uphill, then a mile away to a discharge point along Surface Creek.

The 2016 DCI article concluded that “Completion of the new sewer treatment plant unburdens the town from problems imposed by the near-capacity lagoons. It also relieves the wider community of environmental problems that had been linked to the old lagoons almost since they were put into service in 1978.”