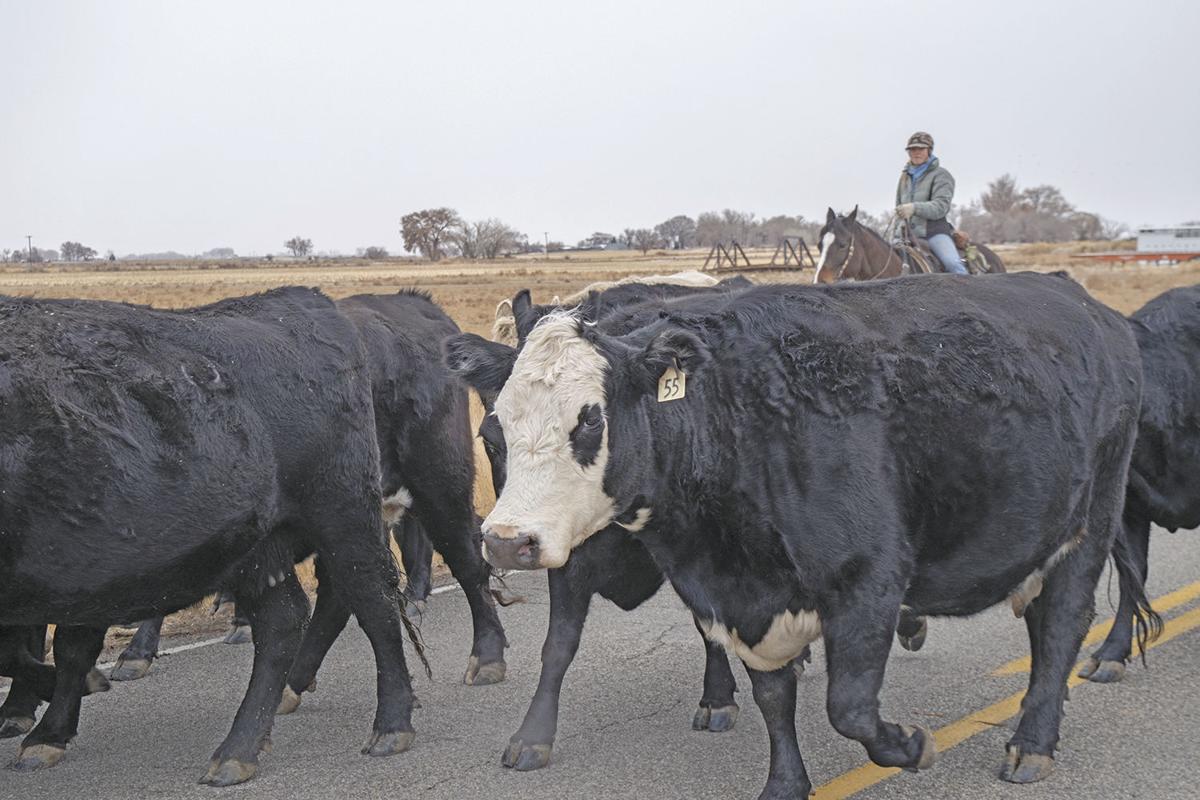 A ranch hand tries to keep the herd moving. The herd, on the other hand, is in no hurry. 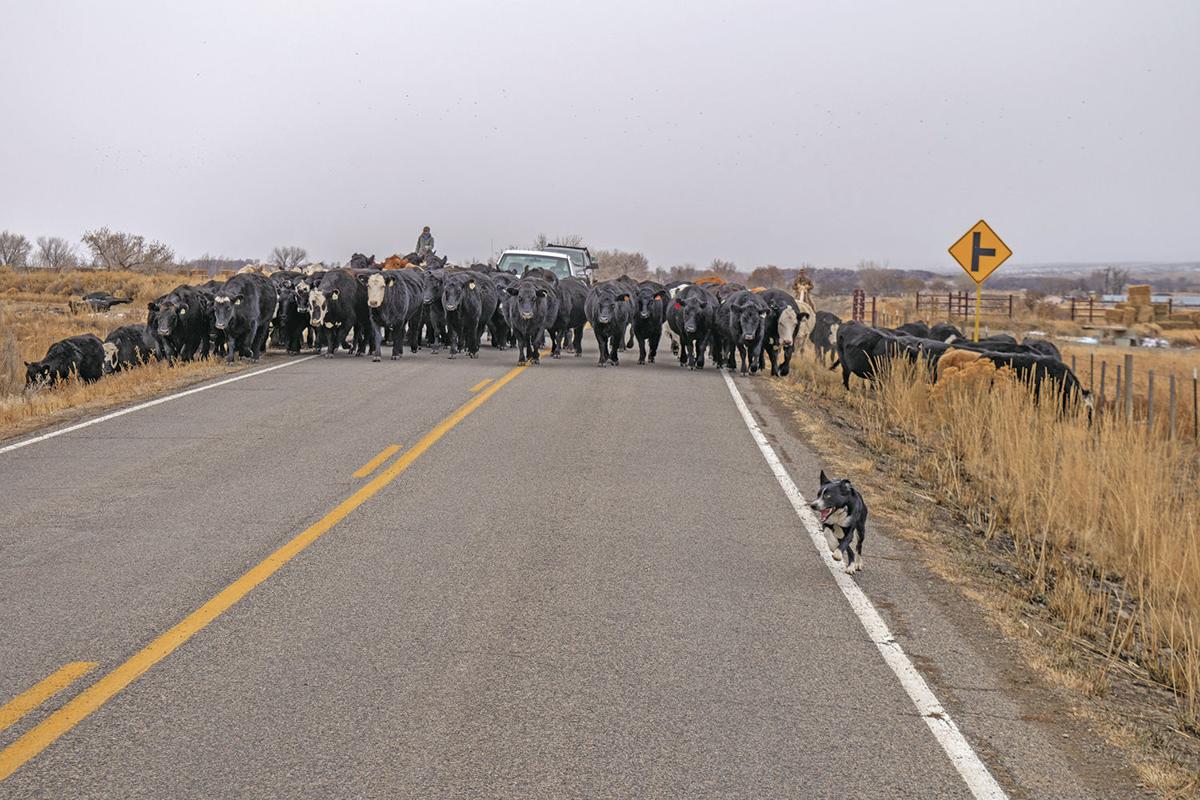 A ranch family moves some cows from one stubble field to another last Friday. Auto drivers need to exercise caution when encountering such a situation. In this case, three riders and five dogs, plus the cattle, are all in harm’s way. Patience is a virtue.

A ranch hand tries to keep the herd moving. The herd, on the other hand, is in no hurry.

A ranch family moves some cows from one stubble field to another last Friday. Auto drivers need to exercise caution when encountering such a situation. In this case, three riders and five dogs, plus the cattle, are all in harm’s way. Patience is a virtue.

The pretty lady in the big white pickup stuck her red flag out the window and into the light snow that was falling out on the California Mesa the other day. I stopped my truck and got out, waving her, the five cattle dogs, three mounted riders and about 60 head of cattle on by.

“Thank you for stopping for us,” she hollered.

“No worries,” I yelled back. “I was looking for a picture today anyway.”

With that, the lead dog, a young energetic heeler, dashed up to me for some recognition. After the pats, he ran off to make sure those cows didn’t stray.

I fired off a few rounds from my Nikon and greeted the smiling young rancher on his palomino as he urged his bovine charges by. I asked him how far they had to go. He motioned to the next field of corn stubble.

“Almost there,” he said.

Meanwhile, the back up on the south end of the herd was up to two pickup trucks and an SUV. The dogs and the trailing riders opened the ranks of the cows and the traffic began to ooze on through.

The whole happy scene lasted about four minutes for me and I was on my way. I did notice one of the passersby seemed a little impatient by his expression when he passed my station. I suppose gridlock on the 348 can do that, but it was hardly a stressful moment.

This time of year, when cattle are on winter feed in the corn stubble, these kinds of scenes repeat themselves randomly along our farm roads. When the cows come down from summer range, they usually feed one of two ways. One, they stay on one main pasture, eating hay and silage dished out by the rancher. Or, they will feed on one stubble field and then are moved to another. The California Mesa this time of year is covered with open corn stubble, which is fine feed. The move from one field to another is usually very short and driving the herds along the road from one field to the next is the best strategy.

When you come upon one of these “drives,” we have a couple of rules that folks need to follow.

Do not ever, under any circumstances, honk your horn. First of all, it won’t do you any good. Second it is impolite. Third it just might irritate an animal that weighs more than a thousand pounds. How do I know? Let me tell you all a story.

I was coming back from a late November quail hunt on the Muleshoe outfit in the New River country of Arizona. It was dark. As I crossed a flat mesa just east of the headquarters, my headlights picked up a dozen or so Hereford steers, hanging out along and in the narrow dirt road. I dropped the old Scout into a crawl and started through them. All but one wandered off. He stood his ground. Confrontation at night with a semi-wild range cow was not on my list of things to do. I tapped the horn lightly, thinking he would just take notice and move on. He did move. He circled quickly to the left as I waited. But, he kept moving, picking up speed. In three seconds he hurled himself head first into the side of my vehicle. The truck rocked, the kids yelled, my wife screamed. The steer stared. I let the clutch out and we left.

Back at the house I took a look at the side of the IH machine. My door panel was caved. But the window still rolled up and down, so it stayed that way until I sold the truck for a newer one later that year. A little concerned about the steer, I called the Muleshoe manager to alert him to what had happened. He said that he had no problems, but that I could have avoided the incident had I tossed out some feed.

If you are meeting a herd head on, you put yourself, your vehicle and the cattle in a safer position if you just stop and wait for them to go by. A small herd will pass in a very short time. Most cattlemen only move smaller groups on these kinds of drives. It is easier and safer. Oh, and trying to get a cow to pose for a selfie is not a good idea.

If you are coming up from behind, you need to be patient and alert. Yes, it will lengthen your trip by a few minutes, but it is part of life in cattle country. Crawl up to within a few feet of the trailing cows. Watch out for the dogs. They are all over the place, trying to keep the herd moving. The riders will usually help you get through their herd by riding into the group, cutting a path for you. Don’t get impatient. Don’t get too close. You are on the cow pie end of the animal and cows, like parade horses, just plop when they want to or get excited.

Another reason to stay back a few feet is when you are on pavement, as we were on the 348 the other day, the cattle are at a disadvantage. Their hooves don’t have very good traction when they walk on blacktop. It would not take much of a nudge from a car or truck to cause a cow to fall. The result could be fatal. An injured animal would probably have to be put down right there.

Plenty of stories coming up

As we kick off a new year, I have tons of stories and things to write about. Coming up in early January, I will visit with the Webb family at the Rocking W Cheese. I have a story about a Clear Fork kid who loves the ranch, but did eight years on Wall Street before coming back to the Western Slope. We’re going to visit a couple of local fish hatcheries. I will be spending some time with Kendall Butterfield, the ag instructor at Delta High School, who runs one of the best high school ag shops ever. And, I have about a half dozen old timers who will be sharing their stories with us.

It ought to be fun and informative. Hope to have you along!

Michael A. Cox is a Montrose-based content provider. He may be reached at michaelc@agwriter.us