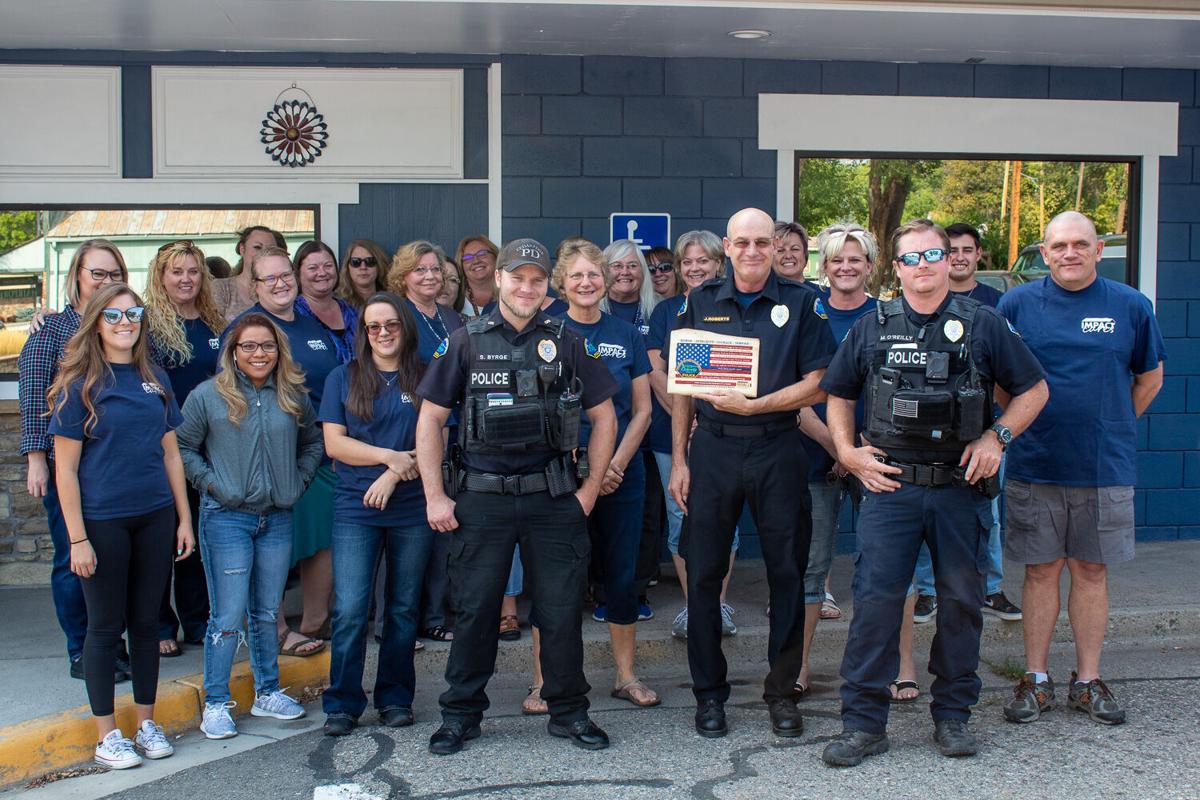 Cedaredge Police Chief Joe Roberts, along with officers Stewart Byrge (left) and Mike O'Reilly (right) are presented with a plaque by the Impact Cares team behind them, led by IC President Dave Reynolds (far right). 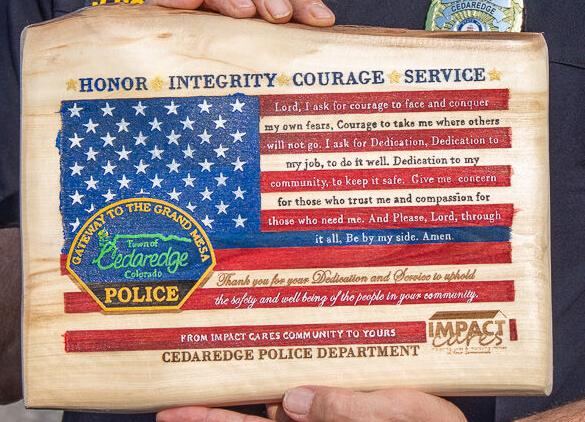 The gratuitous plaque includes a prayer and a message of thanks from Impact Cares and was created by David Murphy, owner of High Style NXS, with laser engraving.

Cedaredge Police Chief Joe Roberts, along with officers Stewart Byrge (left) and Mike O'Reilly (right) are presented with a plaque by the Impact Cares team behind them, led by IC President Dave Reynolds (far right).

The gratuitous plaque includes a prayer and a message of thanks from Impact Cares and was created by David Murphy, owner of High Style NXS, with laser engraving.

On Thursday afternoon, a crowd could be seen on Cedaredge Main Street as two organizations came together for a special presentation by the blue Impact Communities building on the corner of Second Street.

At that time, members of Impact Cares presented a handmade plaque of support to the Cedaredge Police Department (CPD). The plaque was an act of gratitude but also presents a prayer for courage, for officer dedication to community safety and for compassion.

The plaque was created by David Murphy, local resident and owner of High Style NXS. The Impact Cares group recruited Murphy for his skill with laser engraving, ensuring a detailed outcome which includes an American flag and a CPD badge.

CPD Chief Joe Roberts thanked Impact Cares for the plaque and gave a general shout out to the community and its support for law enforcement.

“I’ve been doing this about 38 years, and I’ve worked in 12 different locations, and I’ve never had the support anywhere that I’ve had here,” Roberts said.

Roberts said the police department is about assisting the community, and the residents of Cedaredge make their job easier.

Impact Cares, the presenters of the plaque, is a sister company of Impact Communities LLC, which is housed by the blue-sided building on Main Street. Impact Communities, which was started by Dave and Terri Reynolds in 1995, has the purpose of managing and maintaining mobile home communities, as explained in a 2019 DCI article, “Cedaredge corporation champions affordable housing by managing, maintaining mobile home communities.”

In 2018, Impact Cares, a Christian-faced, charity-based organization, became an official offspring of the original company. Its purpose is primarily to help mobile home residents by completing crucial repairs and maintenance on their homes and properties. This service through Impact Cares comes with no cost to the residents.

“We want to give thanks and honor to the Cedaredge Police Department from Impact Cares and Impact Communities,” Wilson said. According to Wilson, Impact Cares has reached out to law enforcement in multiple circumstances, inviting them to events and including them in many situations.

“We invite the police or the sheriff’s office to come out on the event dates and come out for the lunch,” Wilson said. “We usually have different things for the kids, big bounce houses and stuff like that. We invite the police department out and join in with us, you know, deputize some kids, play some games.” Wilson said some of the communities are low income communities with higher crime rates and more subsequent police activity, so the team at Impact Cares wants people to see “a different side of the police.”

“These kids see police coming in and arresting people, or doing the hard things that police have to do,” Wilson said. “That’s all these kids hear about and all they see.”

Impact Cares operates across the nation, bringing the team to a variety of low-income communities, so police activity is sometimes at the forefront of these communities’ concerns.

A map on Impact Cares’ website, impactmhcares.com, is available under the “Projects” tab and shows past, current and future projects. According to Wilson, they will soon be going to Kansas and Oklahoma.

Wilson explained that, as he’s heard from the community, “So many people don’t know what that big blue building on the corner is.”

Simply put, it’s the headquarters of a team that champions affordable housing in mobile home communities and a team that helps those in need of detrimental repairs.

On the police side of things, the November election will include the Back the Badge initiative for Delta County for the second year running, after it failed last year. The initiative comes with a lower sales tax increase of 0.8%, and it comes with a newly added sunset of 10 years. The initiative has the purpose of providing law enforcement with funds for equipment and staffing throughout Delta County. The DCI will report further on Back the Badge through the election.