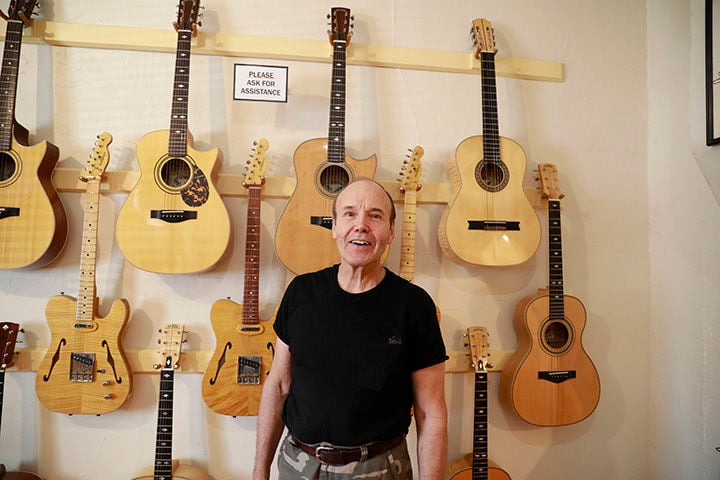 Jerry Brown proudly shows off his display of electric and acoustic guitars at his business, Olden Guitars, on Bridge Street in Hotchkiss. Brown is a luthier, a maker and repairer of stringed instruments. He hopes to share his craft with the community. 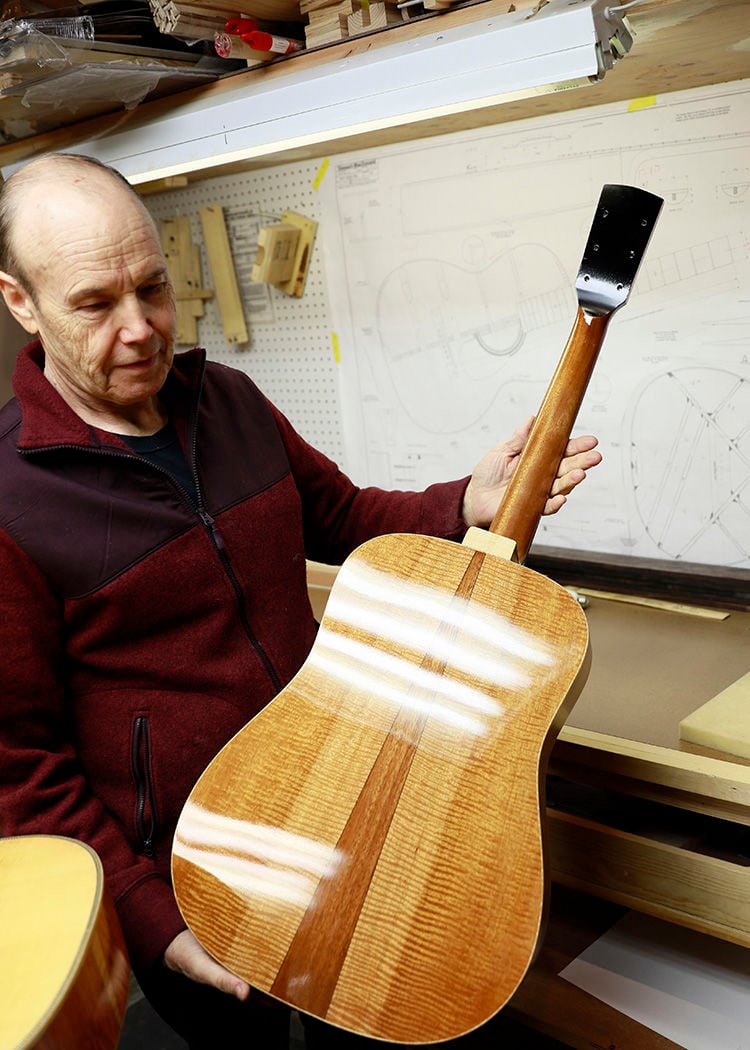 Light reflects off of the body of a tiger maple guitar held by luthier Jerry Brown. The instrument replicates a 1920 Jimmy Rodgers style 000 12-fret guitar.

Jerry Brown proudly shows off his display of electric and acoustic guitars at his business, Olden Guitars, on Bridge Street in Hotchkiss. Brown is a luthier, a maker and repairer of stringed instruments. He hopes to share his craft with the community.

Light reflects off of the body of a tiger maple guitar held by luthier Jerry Brown. The instrument replicates a 1920 Jimmy Rodgers style 000 12-fret guitar.

It’s been a gas station, a feed store and several other businesses over the years. But since last spring, the small, indistinct building at 297 W. Bridge St. in Hotchkiss has been home to Olden Guitars.

Behind Olden Guitars is Jerry Brown, a luthier — a maker of high-end electric and acoustic stringed instruments. Each of his guitars is lovingly and meticulously crafted to produce the finest quality and sound.

“I’m a flute player, but I like to play a little guitar, too.” said Brown, a self-taught luthier. His early education was in the industrial arts — mechanical drawing and design, metal and wood work. After beginning his career as a tool and die maker, he turned to building furniture, cabinetry and trim carpentry.

A little over a decade ago, Brown found his calling in making “light-weight, responsive guitars,” in the tradition and style of Ervin Somogyi. “I build my guitars as he does: from top deflection to triangular browsing,” says Brown.

To make the guitars, Brown has collected woods from around the world. There’s alder, and mahogany, a dark, rich wood with a warm tone, Brazilian rosewoods for a bright sound, and tiger maple, which lies somewhere in the middle of the two, but closer to the rosewood. He thumps each soundboard, listening closely to its voice.

While perfecting his craft, Brown patiently waited five years to take a 10-day course from Somogyi, who is respected the world over for his luthier skills. It was worth the wait, he said. After taking the course in 2015, his skills blossomed.

“A lot of lights came on,” he said. Somogyi didn’t teach how to make a guitar. Brown already had that skill. What he wanted from the master was to learn about voicing, the complex art and skills needed to build a guitar to achieve its best sound.

How a guitar sounds can vary depending on the species of wood, the thickness, the sanding, the finish, and other factors. Brown demonstrates the wood’s tone by tapping on it. He holds the woods close to his ear and listens to their ring.

While factories build guitars based on the thickness of the wood, the best luthiers build their guitar tops to deflection, he said. He carefully selects his woods, and maximizes the fit and function of every single piece. “This optimizes the performance of the top and allows the best response from that particular top.”

Factory-made guitars go from a pile of wood to a completely finished instrument in three to five hours. About 5% of factory guitars will produce that high-quality sound sought the world over, he said. But Brown’s guitars require on average 150 hours of work — measuring, cutting, sanding, fitting and finishing.

Rather than explain the sound, he says, “I let my guitars speak for themselves.”

He also does his own inlay work, shaping each piece and preparing the wood with skill and precision.

Brown also has a collection of vintage guitars, ukuleles and other stringed instruments he displays in his museum, as well as art work by Hotchkiss artist Tracy Sternburg.

Brown said he would like to share his craft with local schools, and his space with the community. He envisions a tea house setting where people can gather and share their love of music and art.

Olden Guitars doesn’t have set hours, but if the door is open, stop in and say hi. Brown can also be reached at 970-712-9528, or visit oldenguitars.com for more information.