Following a discussion a week prior regarding marijuana regulations within the Town of Cedaredge, the town board of trustees and the planning and zoning commission held a work session to discuss parameters for the location of such an establishment. As a work session, nothing was voted into effect, but the discussion guided Town Administrator Greg Brinck and Town Attorney Carol Viner in constructing a draft of a resolution regarding marijuana in town.

The meeting, which happened the evening of Dec. 17, resulted in a majority consensus that retail marijuana establishments should be limited to either Zoning District MU-C-D1 or B-1, with the exclusion of West Main Street.

As shown on the image alongside this article, MU-C-D1 essentially follows Highway 65 (shown as a bold red line) from the south side of town limits to a point just past the Pioneer Town Museum. From there, B-1 takes over along the highway until a point shortly before Cedaredge Elementary School. B-1 does also cover the “Historic Downtown” business portion of West Main Street, a portion of East Main Street and some surrounding area. The trustees and planning commission overall agreed to exclude West Main Street from consideration for the time being even though it falls within the B-1 district.

“I don’t think it really fits in with the historic part of downtown,” Trustee Jim Atkinson said on the matter of West Main Street. This was met with agreement by every member of the board and commission with the exception of Commissioner Larry Naslund, who said he had no problem with an establishment on West Main.

The problems with West Main Street that were brought up included limited parking and a lack of compatibility with the historic area. Trustee Charlie Howe also worried that it would be a “slap in the face” for the almost half of town residents who voted against marijuana.

Trustee Heidi Weissner said she felt that West Main wasn’t ready for retail marijuana as several town residents are still hesitant about the idea of pot, so she ultimately agreed that it wouldn’t be the place to start. Attorney Viner advised that parameters for location could easily be changed with resolutions down the road at any time.

An area of preference which was favored by Howe, Trustee Cathy Brown and Terry Jarbo of the planning commission was the south end of town, like in the area that recently held the Hong Palace Chinese restaurant. Secondarily, East Main Street was considered by these officials, as it is an entirely different situation that West Main.

A follow-up concern that arose with the discussion of East Main was that of sidewalks.

Trustee Patti Michael stated that she felt sidewalks from the retail marijuana business leading into the historic downtown would be crucial for sharing the business of outsiders, thereby benefiting more local business owners and town sales tax.

Weissner, Trustee Richard Udd and Mayor Ray Hanson all acknowledged or supported the establishment being closer to the downtown area for this reason and brought up probable locations that included the post office area of SW Second Street or the Short Branch Liquors area, closer to the police station.

The trustees and planning commission also discussed buffer zones around schools. Though the State of Colorado has a statute on medical marijuana being at least 1,000 feet from schools, the Cedaredge officials should much more popularity in setting a 500-foot buffer zone for both recreational and medical marijuana.

As Weissner observed, a 1,000-foot buffer would rule out a hefty chunk of West Main Street, which would lock out future decisions to allow establishments on West Main.

The exception to this rule was Brown, who favored the 1,000-foot buffer in order to keep marijuana establishments further from the schools.

Overall, however, the 500 buffer was strongly favored, meaning the draft ordinance for the town’s marijuana parameters will likely suggest 500-foot buffer zones from schools.

Beyond establishment location, the town officials talked about requirements for parking, and the popular consensus was that the retailers would need to provide adequate parking for their venues.

The draft of the resolution is planned for discussion in January, when it will either be fine-tuned or voted into effect, thereby setting official parameters for retail marijuana in the Town of Cedaredge. 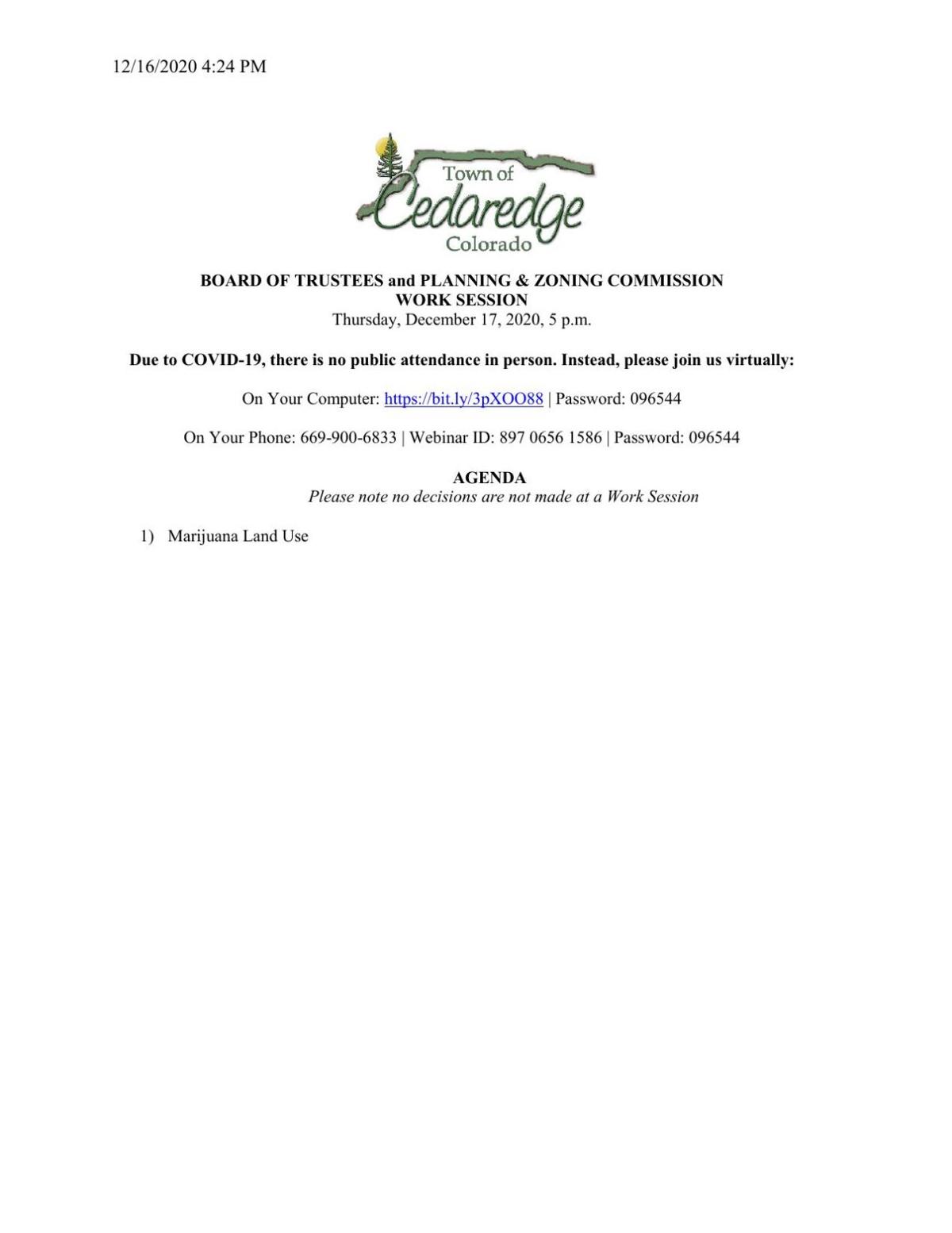 Like how the old timers say "The kids will get into their parents pot"!

The old timers had their kids drinking their moonshine, smoking their cigarettes and stealing their pills but thats no big deal right?

Its that demon weed plant thats the real problem :D

"People are still hesitant about the idea of pot"

Pot is no more dangerous than most prescription drugs the doctors are dolling out like pez candy.

But no one has any problem with a legal drug dealer on every corner.

You have the doctor and the pharmacist getting people addicted but hey no problemo!

People are so brainwashed