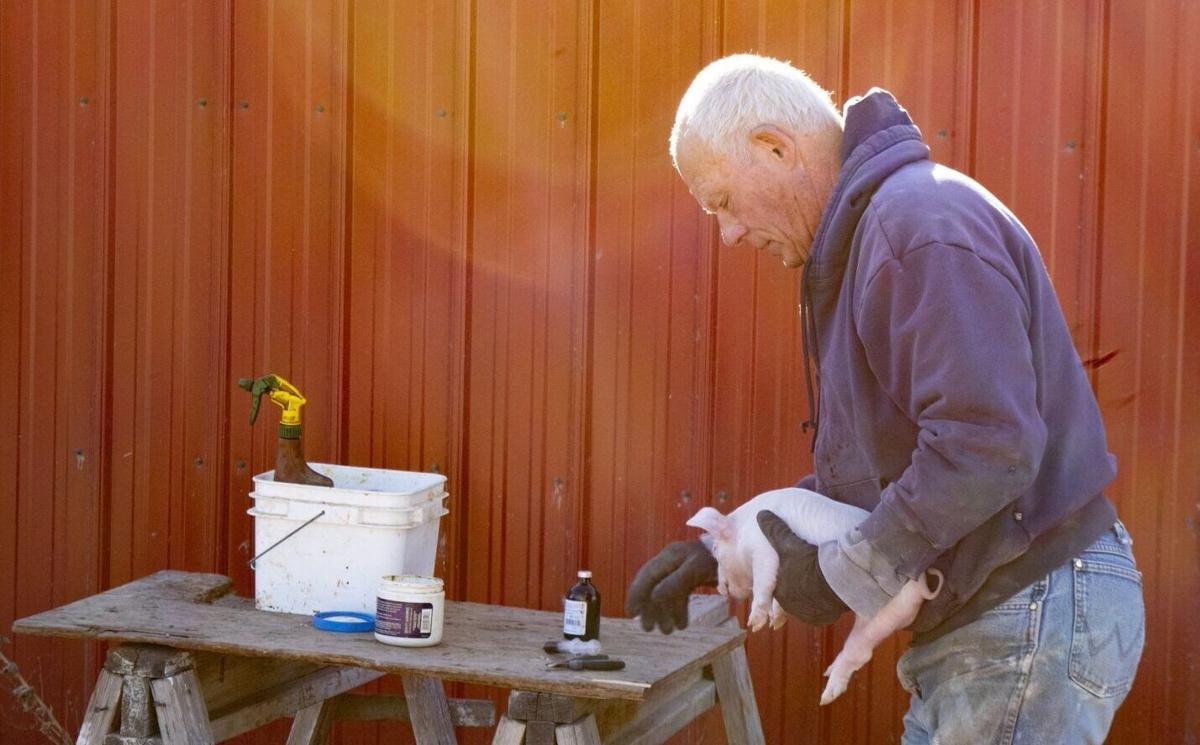 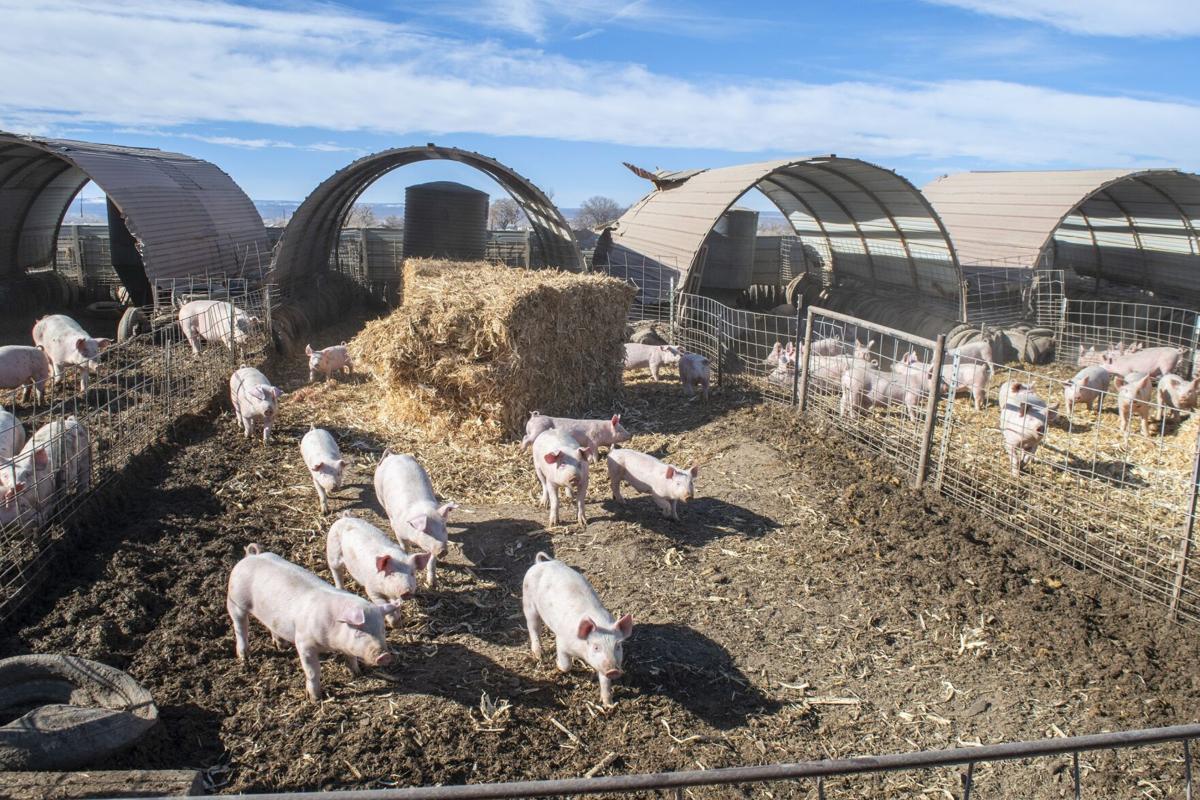 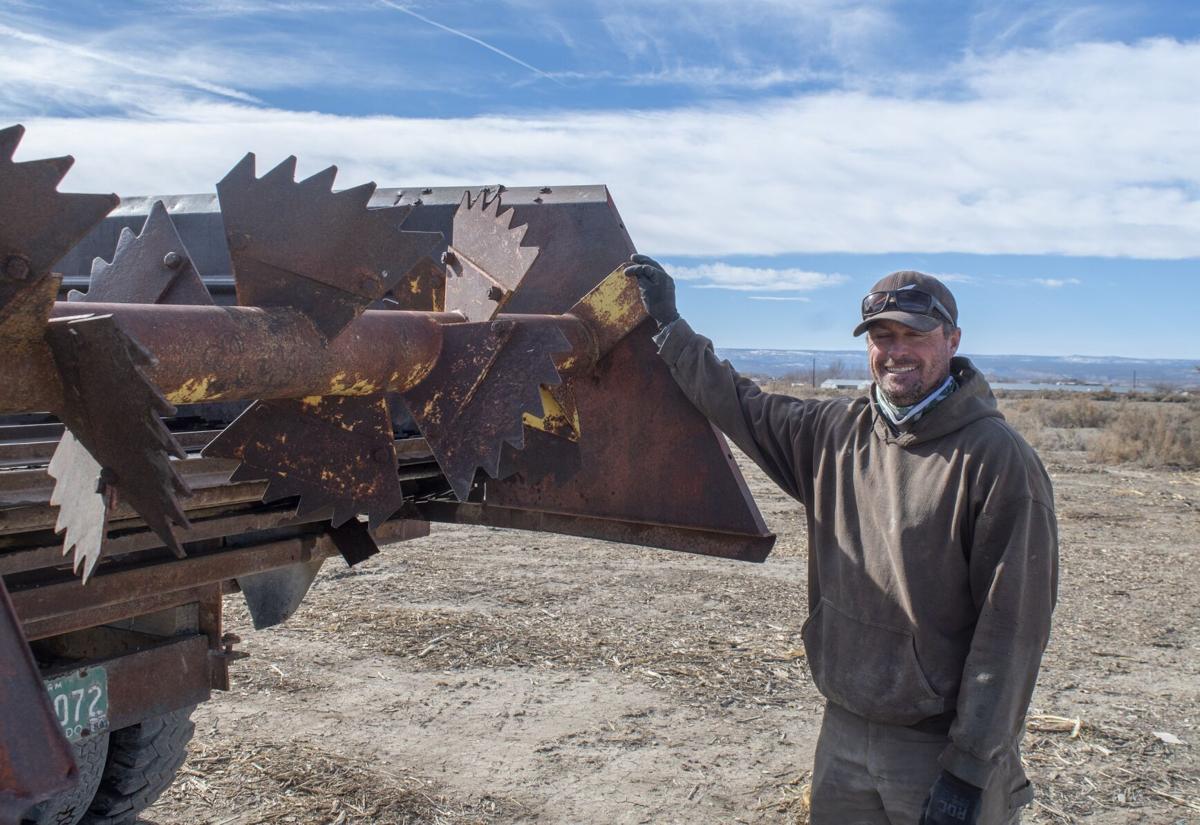 George Rosenbaum, 42, with his prize 50-year-old manure spreader, an integral part of the regenerative soil program that he operates. 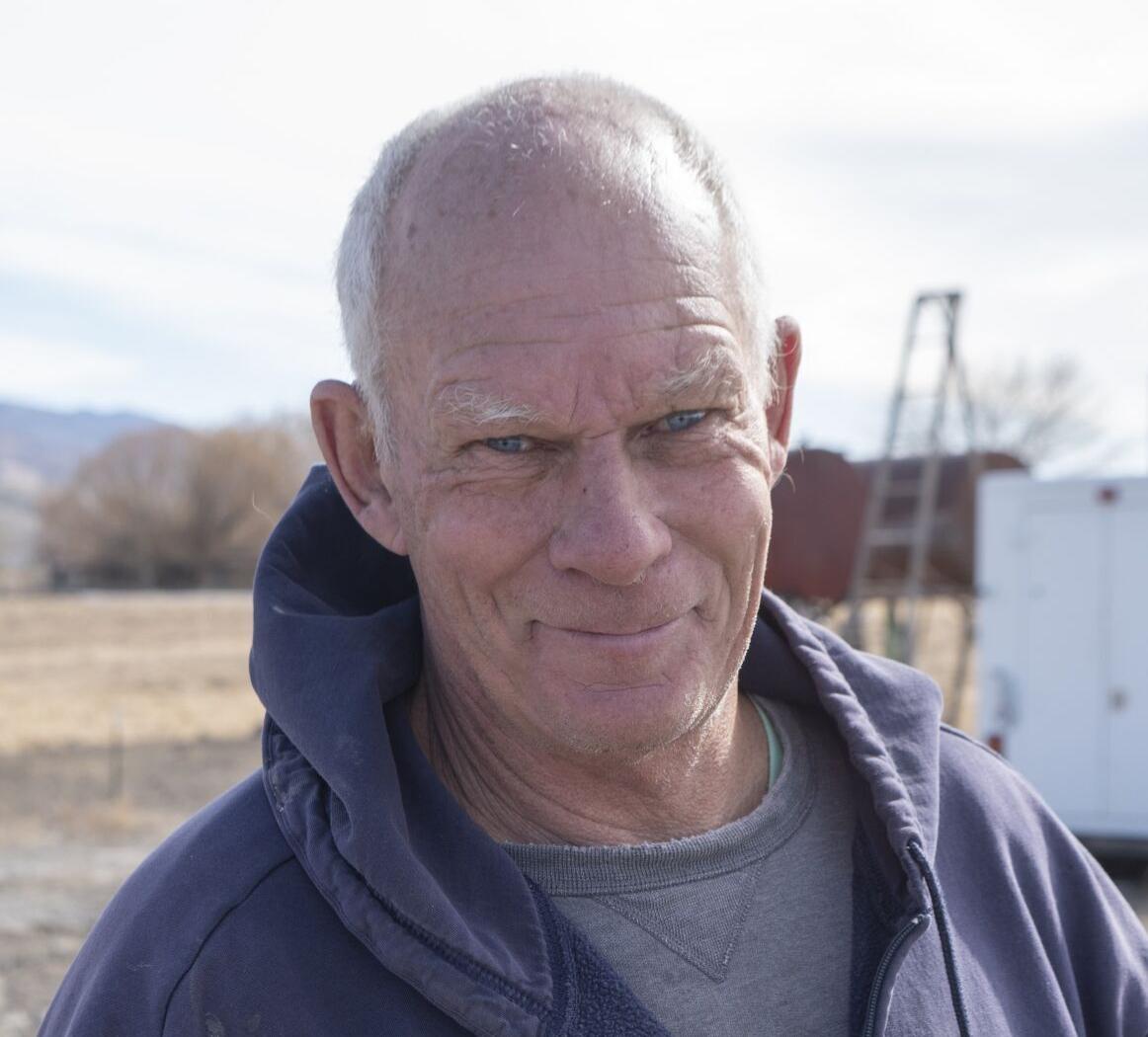 David Rosenbaum began farming in Olathe in the 1970s. 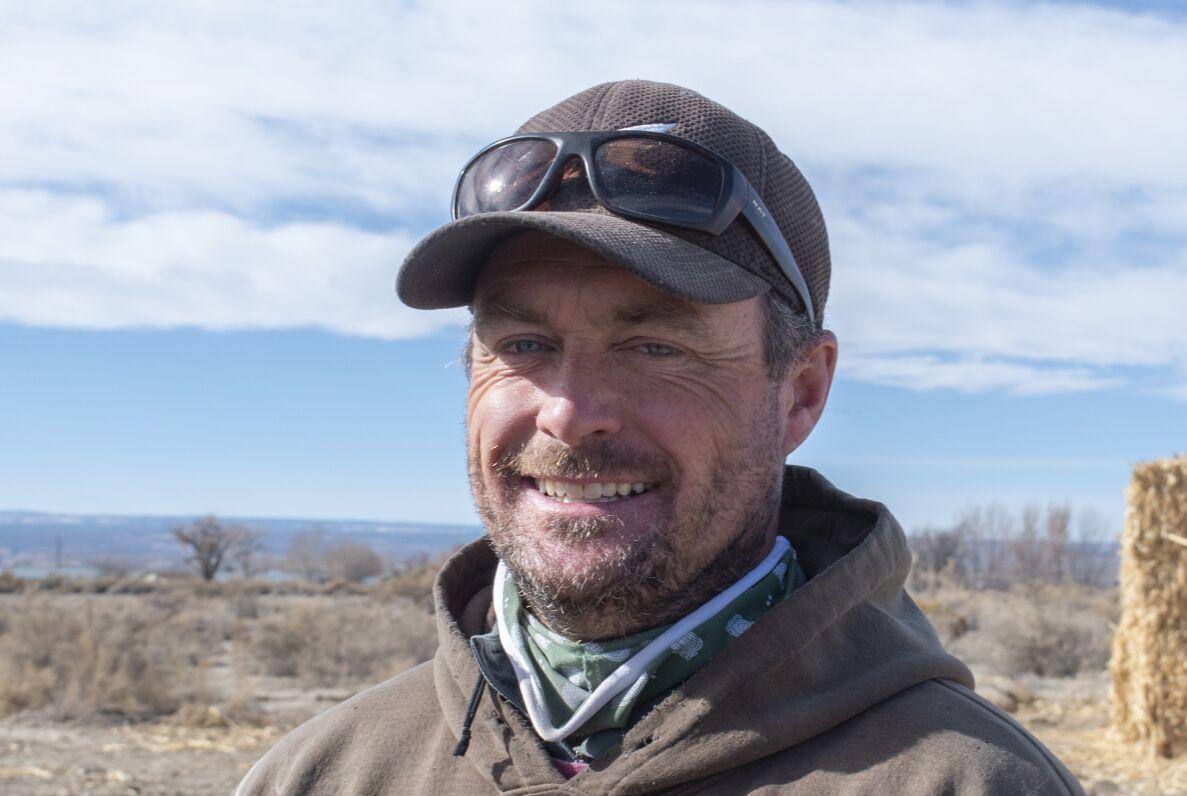 The ‘71 International Harvester Lodestar flatbed truck with a manure spreader on its back was already in a bone yard when George Rosenbaum saw gold in the battered red paint job. The farmer from Olathe says that he walked around the truck, which had springs popping through the driver’s seat and headlights without lenses. When he got behind the rusty relic, he casually grabbed the spreader rotator and tried to move it.

“It moved, the whole spreader power train moved, I didn’t really expect it to,” Rosenbaum recalls. Asking the owner about the truck, got George an, “If you can move it, you own it,” response. So, who wants an ancient mature spreader in this world of gas bottles, irrigation injectors and such?

Well, the Rosenbaums do. George, 42, and his father, David, 72, who have a sprawling swine-growing farm on David Road, 3 miles east of Olathe, needed the rig to help them spread their special manure-based compost soil nutrients. The manure is the key ingredient in their adopted regenerative soil system.

The primary operation is a swine production farm. They keep about 30 sows and enough boars to provide semen to put 600 pigs on the market each year. The strain is basically a cross between Yorkshire and Landrace breeds. The Yorkshires are a very hardy and muscular stock. Crossing them with the long-barreled Landrace line produces, “More pork chops per pig,” said David, who came to Olathe with his wife, Betty, in the early 1970s, looking for a better climate for her acute asthma.

Now, with close to 700 pigs on the place, they obviously need feed for them. They can buy or produce it themselves. The Rosenbaums choose to produce it, with the help of the pigs.

“We grow three crops on 130 acres,” said George. “It is about a third, a third and a third of corn, barley and soybeans.” They process the crops for feed and compost. And, they sell soybean oil and paste as one of their cash producers.

Feeding 700 hogs produces a couple of hundred thousand pounds of pig manure every year. That begins the cycle that the Rosenbaums follow for their nearly self-sufficient, organic farm. Swine excrement is very high in nitrogen. The Rosenbaums mix the manure with corn stalks, wood chips, and barley straw, but not in a machine, in each of the pens where the 600 or more annual crop animals live. A couple of dozen growing pigs in each pen eat and scatter the open bales. They trample the mixture into the manure base to create their environment and compost.

Several times a year, David and George move the pigs and remove what has become a rich compost fertilizer that is piled to cure in the sun until it is needed.

George says that they will begin the growing season as early as later this month. They are basically no-till on two thirds of their land, and it is their goal to become fully no-till in the near future. The system rotates the three crops through their various fields annually. First, they will spread the compost with that old Harvester truck and begin irrigating to take the nutrients into the soil. Then they will plant, by drilling the seeds into the soil. In the past they would have done a disc treatment to work the compost into the soil. Now the field with the corn gets tilled, which works out to any field getting tilled every three years.

Meanwhile, there is a happy and growing organic community happening underground. The Rosenbaums keep a record of their organic component. In the last five years the organic material they have introduced to their soil has risen from about 2% to as much 4% now.

If you take a look at the soil on the high, east, side of the valley, just below the adobes, you find that it is named Montrose silty clay. Most of the land is on a 2% slope, so it drains well, which is a perfect place for low or no-till farming. Soil scientists consider it excellent for farming if irrigated. And that is something the Rosenbaums do, but with a certain science that saves water — another goal of their growing style.

“The barley goes in first and by mid-July we take the water off of that,” George said. He explains that the fast growing barely uses much less water than the soybeans and corn. By not growing all three crops at the same time they save water. Generally, they have more water than they need to finish their crops. Even with a 60% call on water, which is a real possibility this year, George said that they should have no trouble getting through the season.

By growing, and processing their own feed, creating organic compost fertilizer, having a water plan, not spending a lot of cash on tractors and labor for tilling, the Rosenbaums have a financial dynamic that keeps them away from lenders and labor contractors.

“Dad and I are pretty much able to handle everything ourselves and that is pretty comfortable,” George said.

Meanwhile, back at the sty, the Rosenbaum pigs never see a long haul to some processor hundreds of miles away. Country of Origin Labeling (COOL) means little to them. Their end product pretty much stays on the Western Slope.

“We sell pork through Homestead Meats in Delta, Kinikin in Montrose and a few other places,” George said. They also sell halves, quarters, and on-the-hoof animals. He adds that while they never use antibiotics and have a natural growing system, they don’t have, but do provide an affidavit that swears to the fact that their crops and livestock are naturally grown. No matter, apparently the word is out about the quality of the pork from David Road. Business is good out there, above and below ground.

“We have never had to advertise,” said David Rosenbaum. That is a real point of pride for any businessman.