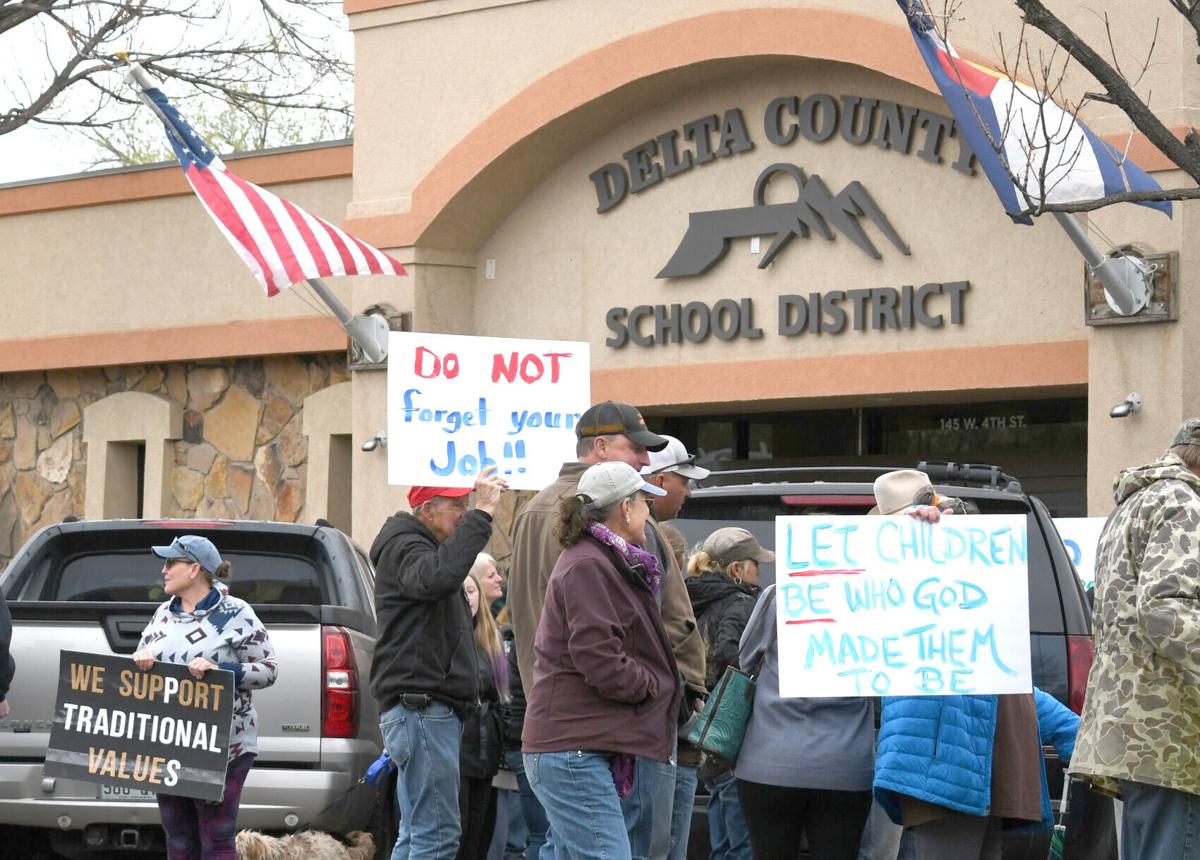 A large crowd met in front of the Delta County School District headquarters prior to the school board's regular meeting. 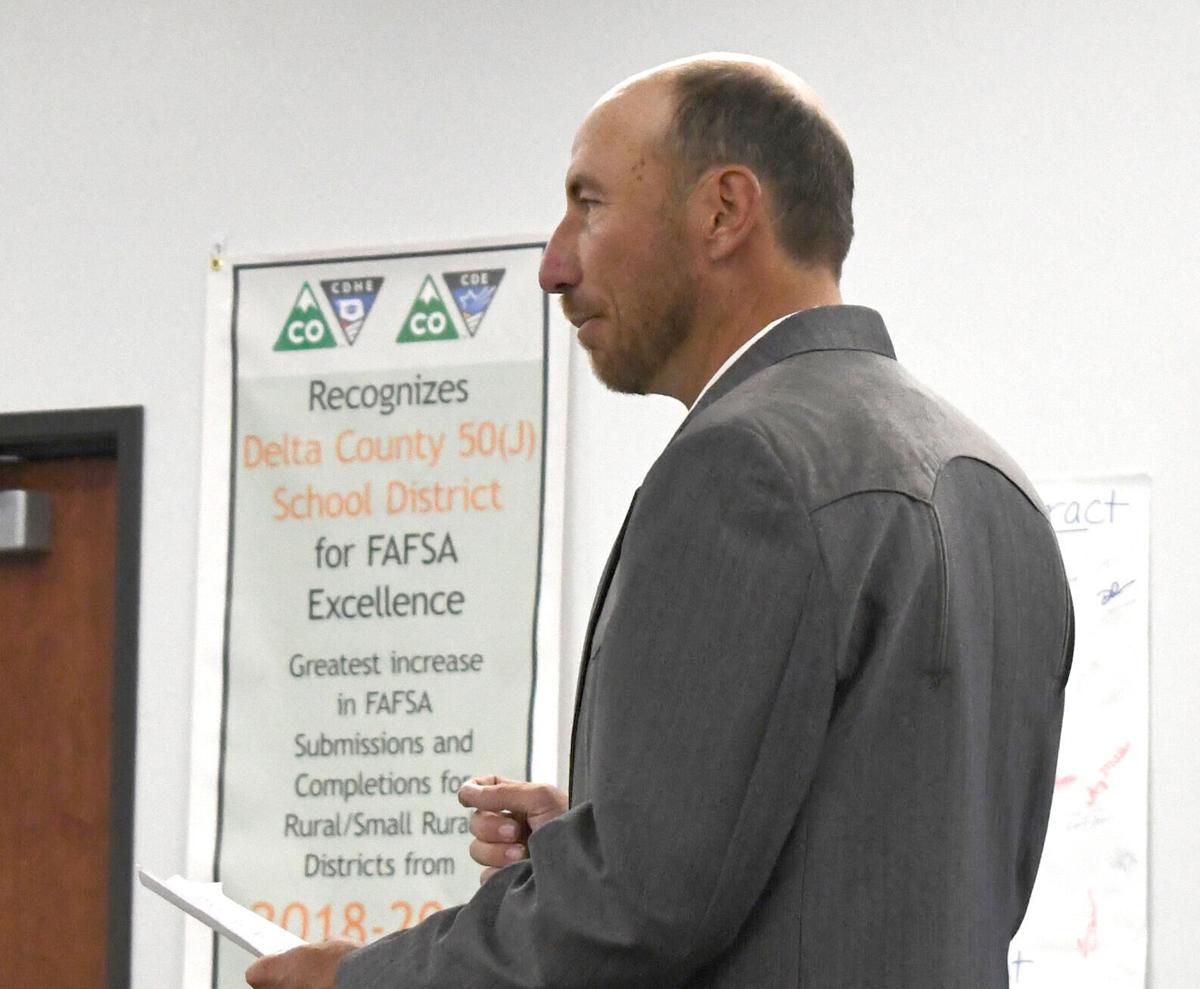 Shane Kier spoke in opposition to CHSE being taught in Delta County Schools.

A large crowd met in front of the Delta County School District headquarters prior to the school board's regular meeting.

Shane Kier spoke in opposition to CHSE being taught in Delta County Schools.

Delta County School District Superintendent Caryn Gibson told the Delta County Independent Thursday afternoon that, “due to the many questions that have come in recently” she made the addition to the agenda. A revised agenda was posted on the school’s website prior to the meeting.

“We were hearing that a lot of people were getting wrong communication about what the school district was doing. Because really, we’re in a research phase. I don’t know how that information got out there but, we really tried to be open and hear people. That’s why Jan (Tuin, board president,) gave the update,” she said.

Some of the mis-information came from within the district. A Hotchkiss High School newsletter released on April 12 contained information stating that the district had already approved CHSE materials and was implementing sex ed classes in the spring. The link to the newsletter has since been taken down.

“The previously published Hotchkiss High School (HHS) newsletter incorrectly referenced the district’s adoption of CHSE curriculum. The district has previously scheduled sex-ed seminars for ninth graders provided by local health professionals. These seminars are locally developed and do not include material from a published CHSE curriculum. The district did not direct HHS administration to take down the newsletter,” Gibson told the DCI.

Before the start of the school board meeting, a crowd of between 300 to 400 persons gathered to show its opposition to comprehensive, inclusive sex education.

Several protesters held signs stating, “We Support Traditional Values”; “Let Children Be Who God Made Them”; and “Do Not Forget Your Job.” Protestors listened to several religious messages, mingled and prayed while the board heard public comments.

The comment time, dominated by those opposing this curriculum, was limited to 30 minutes with each speaker limited to three minutes. Gibson said the time was controlled due to the number of agenda items including the naming of the new school.

Individuals wishing to speak in favor of the curriculum said they were surprised to find that the district implemented an ad hoc “reservation system” bypassing the first come first served policy. One person noted that a district official who was standing at the sign-up list called the procedure “very unusual.”

When asked about the policy, Gibson said, “The order of public comment is determined by the sign-up sheet. We had people starting to show for the meeting a little after 4 p.m. and the meeting did not start until 6 p.m.”

Groups in opposition to the sex ed curriculum had already planned to demonstrate at the school district even though the item was initially not on the agenda. An email circulated by the Delta County Republican Party over the weekend called for community members to attend the April 15 school board meeting. First Baptist Church in Delta helped to organize individuals wanting to speak at the meeting.

Kier, former sheriff turned pastor, spoke against the CHSE curriculum saying he wanted to make the school board’s job much easier by telling them that, “Delta County will not tolerate a comprehensive sex education program.”

After his allotted time, Kier added he wanted the board to make a decision by October saying a decision in support of the curriculum would force him to take his children out of school.

In a follow-up interview after the meeting, Gibson said if the school board decides to move forward with the topic, it would hold additional public input forums.

“Our thought, as a school board, is that we would have a forum or community meeting in each community and hear their thoughts, if we get to that point. And I do hear loud and clear that they would like that to be done sooner than later because they want to know what is in plan for next year,” she said.

Gibson could not guarantee that a decision would be made by the fall, however seeing the community’s reaction, she said the district’s timeline may be shortened.

“Knowing that people want to know, I think that we will try to do our research quicker, gather data, get a survey out, collect those and if it warrants community meetings ... or it might be done at that time, we’ll just have to wait and see,” she said.

The day after the school board meeting, the district released a statement:

“A little over a year ago, Delta County School District was approached by a few individuals asking to implement a Comprehensive Human Sexuality Education Curriculum (CHSE) that aligns with House Bill 19-1032. The school board did not feel they had enough information so they formed a task force to study the needs, and recommend a possible CHSE curriculum that was standard-based.

“The school board has decided NOT to adopt a CHSE curriculum at this time. The school board has decided to have the district’s attorney draft a ‘one-pager’ explaining the district’s options and then share that information with the communities of Delta County. The board would also like to survey the community in the next few months to determine if the school district should provide a standards-aligned CHSE curriculum.

“At this time, the CSHE survey will ask if the community supports providing a curriculum that aligns with House Bill 19-1032 and state standards. After the survey results are collected, school district leadership and the school board will determine the next steps.”

The next school board meeting is scheduled for May, 20 at 6 p.m at district headquarters.

Some years ago I was a member of a conservative Baptist Church in Evergreen, CO. I also worked for the county health department. Knowing the parents quite well, I was aware they were 100% against sex education in the school, that was for them to teach. I can tell you I would see the car load of little high school girls coming in once a month for birth control. Of course the parents had no idea these girls were sexually active, until there was a pregnancy, and then it was only that one girl. Don't kid yourselves, children do what children do and sex is a big thing.

But they fail at teaching basic subjects.

The schools job is not to teach kids about sex, thats a parents job.

The schools in Delta county use "The learning Council" to teach their sex ed.

Parents BEWARE, the same sick equity agendas they push on the front range are going to be forced on you too.

Your straight kid will have a dress code, but a cross dressing confused teen wont be required to dress appropriately for school creating distractions.

I have a school age child but wouldn't use any public school in this entire state, including Delta county because the schools here are horrible too.

I'm not even sure parents will win this fight because the state wants to warp your child's mind and the learning council is ready to oblige.

I home school mine, its the only way you can keep your kids from being either dumbed down or warped in the head seriously.