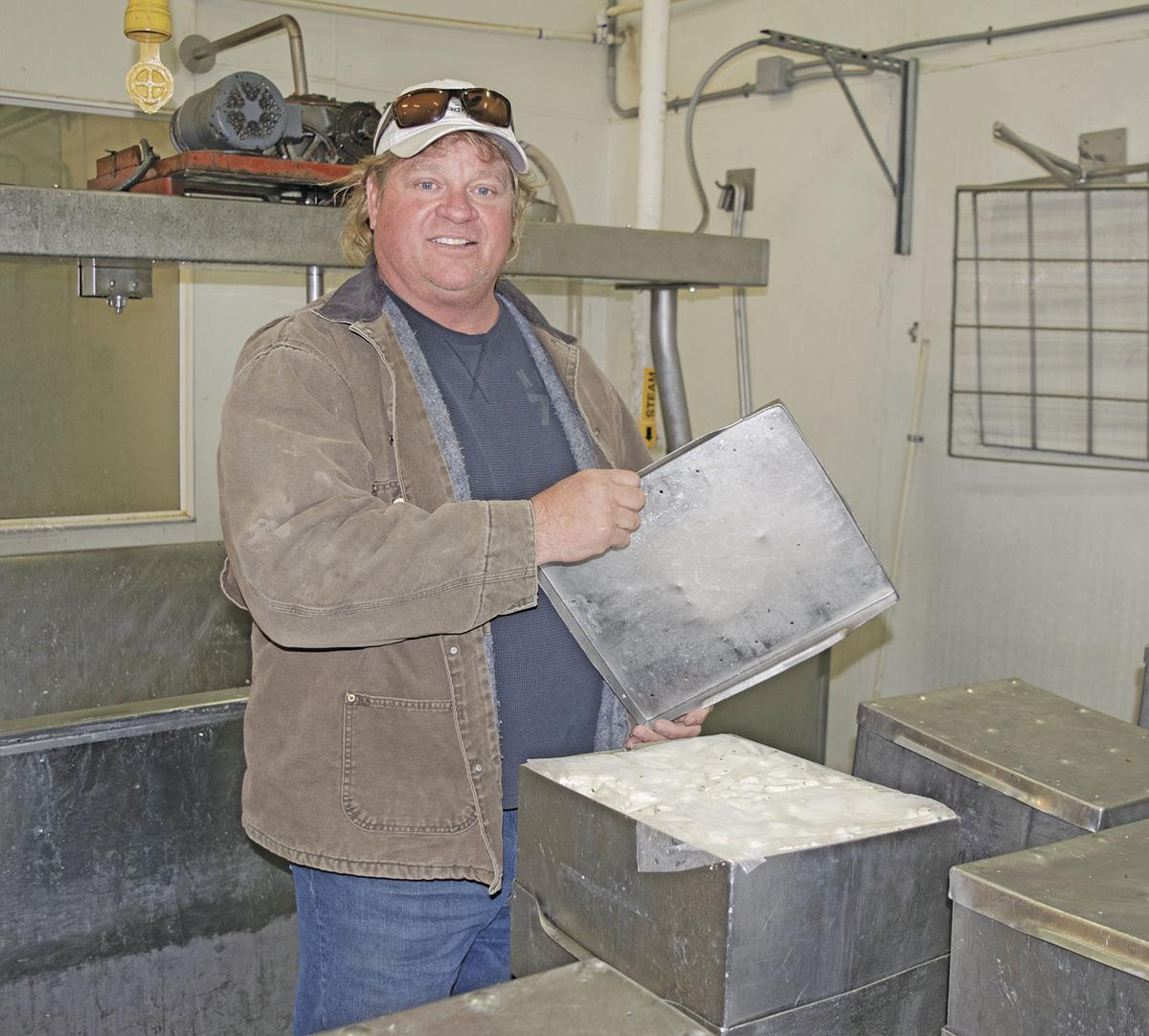 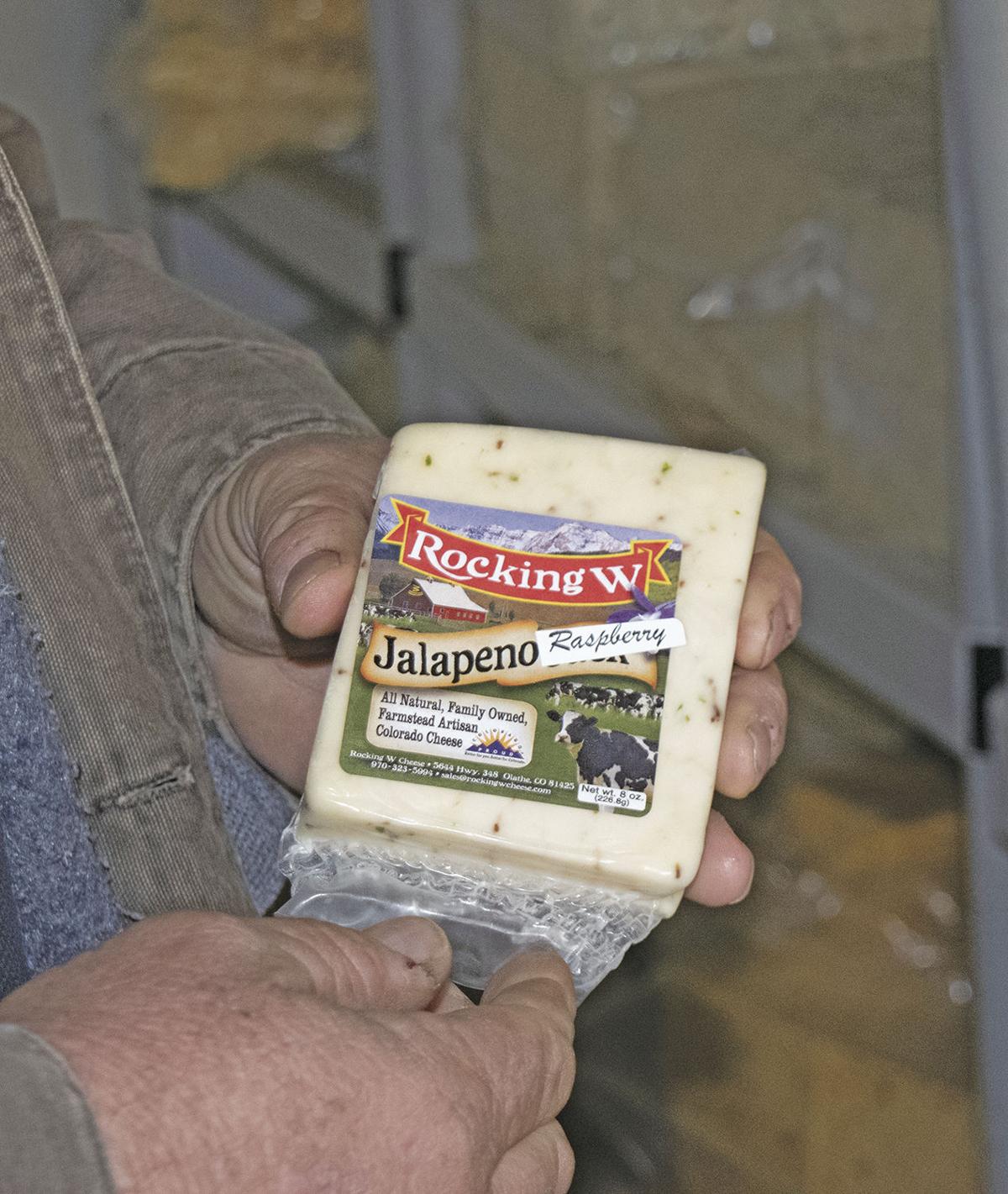 A sample of the cheese products made by Rocking W Cheese.

A sample of the cheese products made by Rocking W Cheese.

Jim Webb does not do almond milk or rice milk or soy milk. He does cow milk, about 32,000 pounds of it a day. Six days out of seven, he and the family-owned dairy ship its fluid milk product to the Dairy Farmers of America plant in Denver. But they don’t rest on the seventh day. The 32,000 pounds from that day goes into Rocking W Cheese, made right there at the corner of Colorado 348 and 5630 Lane, west of Olathe.

“Did you know that a quart of almond milk only has two almonds in it?” he asks. The rest is water and other chemicals. “There is no way any of the plant-based milk (replacements) are as nutritious (or tastes as good) as cow’s milk.”

Webb could be the last in a line of dairymen who have been on the California Mesa since the early 1940s. His grandfather, Don Webb, ran dairy cows and a few thousand turkeys early on out on the western edge of the mesa. That was before he enlisted and served in the Second World War, ending up a Japanese prisoner for almost four years — an experience most did not survive. But Don did and came back to the farm.

Around 1960 Jim’s father, Robert, and the rest of the family decided to move closer to town and they bought land along 348 around Dry Creek where they set up the Rocking W Ranch and the Webb Dairy. Jim was born in the late ’60s. He went through high school in Olathe.

“Then I went to Mesa University for two years. After that, I transferred my credits to Colorado State and got a degree in ag business and animal science,” he said. There was never a question about leaving the farm.

Over the years the Webbs and their extended family that includes John Gibson, Jim’s brother-in-law, have operated the dairy, while always looking to safely expand their herd and production capacity. Jim’s education and dedication to the family have served him well. The Webb Dairy and Rocking W Cheese are not seat-of-your-pants operations. Nothing is left to chance.

“We learned a long time ago that growing as much of your own feed as you can is critical to profitability,” Webb explained. “We grow, cut and store our own silage. We test our feed for nutritional values and keep records on our cow weights and milk production.”

A nutritionist visits the farm regularly, where she examines the records and then helps the family develop the diet required to sustain health and productivity in the herd. The Webbs bring in cotton seed from Texas and grains from elsewhere to supplement the formula.

The farm maintains a herd of about 400 producing cows, 100 dry cows and 250 heifers. The heifers will produce nothing until they are two years old. The dairy makes a big investment in the young cows.

“They cost us four to six dollars a day for two years,” said Webb. That means they will have just shy of a million dollars invested in the new members of the herd before they ever see the inside of the milking parlor.

The Webb herd is a Holstein/Jersey cross, “We call them Hojos,” he said. The combination gives the herd a high yield with solid 3.2 to 3.5% butter fat content. The dairy also produces 2% milk, which is nothing more than whole milk with some of the “cream” separated out. It is a simple mechanical process.

Meanwhile, the family kept an eye open for other opportunities.

Fluid milk consumption has been sliding for sometime, although it has recovered partially over the last couple of years. Competition from plant-based milks and other beverages has divided the market. What hasn’t slacked is the consumption of cheese and ice cream.

“I never thought of myself as wanting to make cheese, but I was curious about how it was made and what was involved,” said Webb. “So I went to cheese school.”

Webb says he took a cheese course at Utah State. What he came away with was that it might be worth pursuing opportunities in cheese making.

“We got a grant and did a feasibility study,” Webb said, “We thought it would work, so we put up the building, expanded our barns, and did some preliminary marketing work. That was in 2008.”

Jim’s short course did not turn him into a cheese maker. But he knew enough to hire somebody from Wisconsin. The licensed “cheesehead” got them started, but his heart was in the north woods and he headed back home too soon.

“So then we hired a Master Cheese Maker, also from Wisconsin,” Webb said. Meanwhile, brother-in-law John was watching and learning. He is now the official Rocking W cheesehead.

“He has learned to experiment and add things like ghost peppers and other ingredients,” Webb said as John wheels in a cart with four giant Rocky Mountain Sunset Cheddar bricks on board.

John has been able to develop a number of popular cheeses which started when he added jalapenos to the Monterey Jack. Recent additions are Smoked Ghost Pepper and Smoked Baby Swiss.

Talking to Jim Webb, you just know he has a handle on selling his products. He talks the lingo and he loves his products. Perhaps that is why he was asked to join the National Dairy Promotion and Research Board. The board is the dairy sector’s version of the Beef CheckOff program.

While the family sells milk and cheese and some homemade ice cream in the Olathe store, you also will find their cheese in the Kroger stores, which includes City Market in Colorado as well as Safeway and Albertsons (California). Webb set that chain up through the Gourmet Foods Company.

The Rocking W store is a regular stop for a lot of families in Delta and Montrose counties.

“We built a lot of good relationships, we’ve been here for over 43 years,” Webb said. “Our milk is fresh and organic.”

Speaking of how long the Webbs and their extended family, which includes the Sumners, Pattons and Gibsons, have been in business, there is a nagging question about the future. Webb is 53 and there is no one in the pipeline to follow him.

“The family has talked about it. Dad is 81 now. My daughters have careers elsewhere and there is really no one coming up after me. It is not a big issue yet, but it is one that we will have to deal with,” he said. Webb says he knows other families who have gone through generational changes. “It is something we all need to address.”

Meanwhile the Rocking W will keep on Rocking — and rolling — right along, out there on the California Mesa, just a little bit west of Olathe.

Michael A. Cox is a Montrose-based content provider. He may be reached at michaelc@agwriter.us

Preparing for a new year of gardening