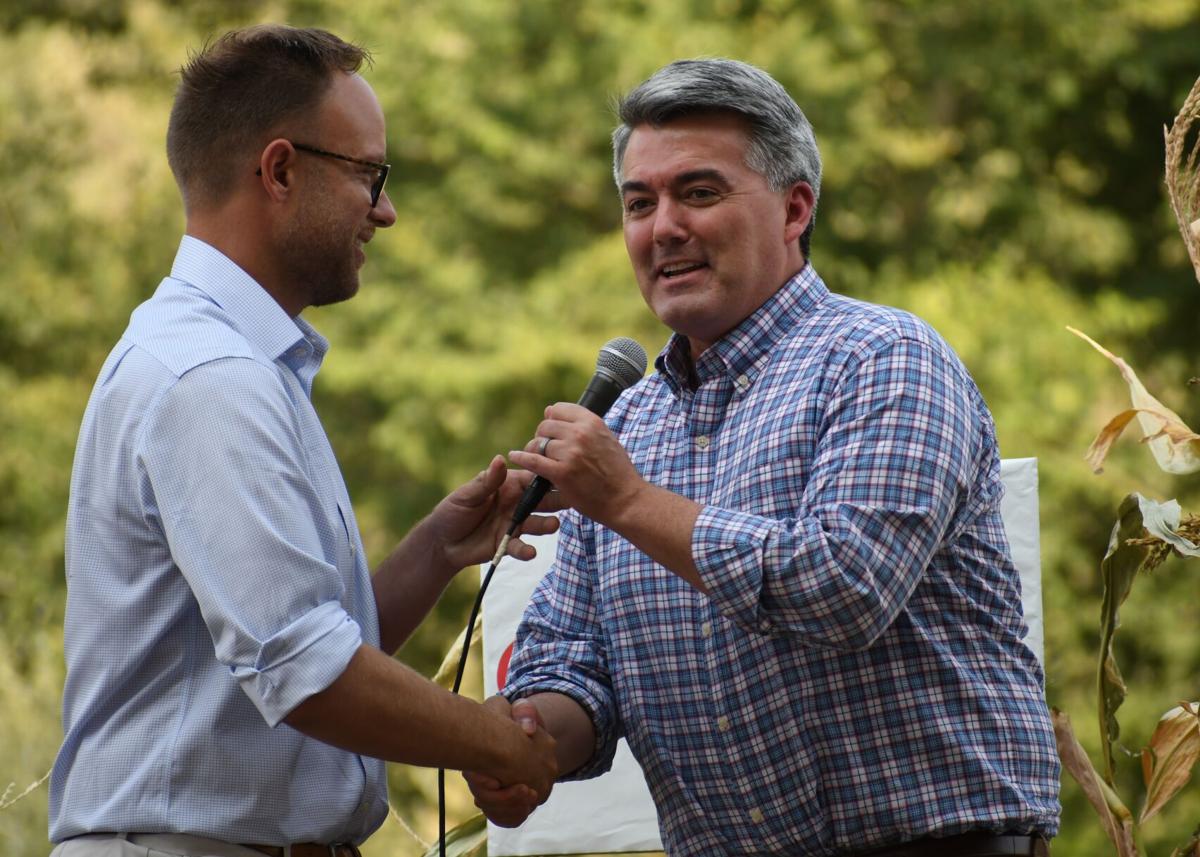 State Rep. Matt Soper (left) hands the microphone over to U.S. Senator Cory Gardner during a recent stop in Delta. 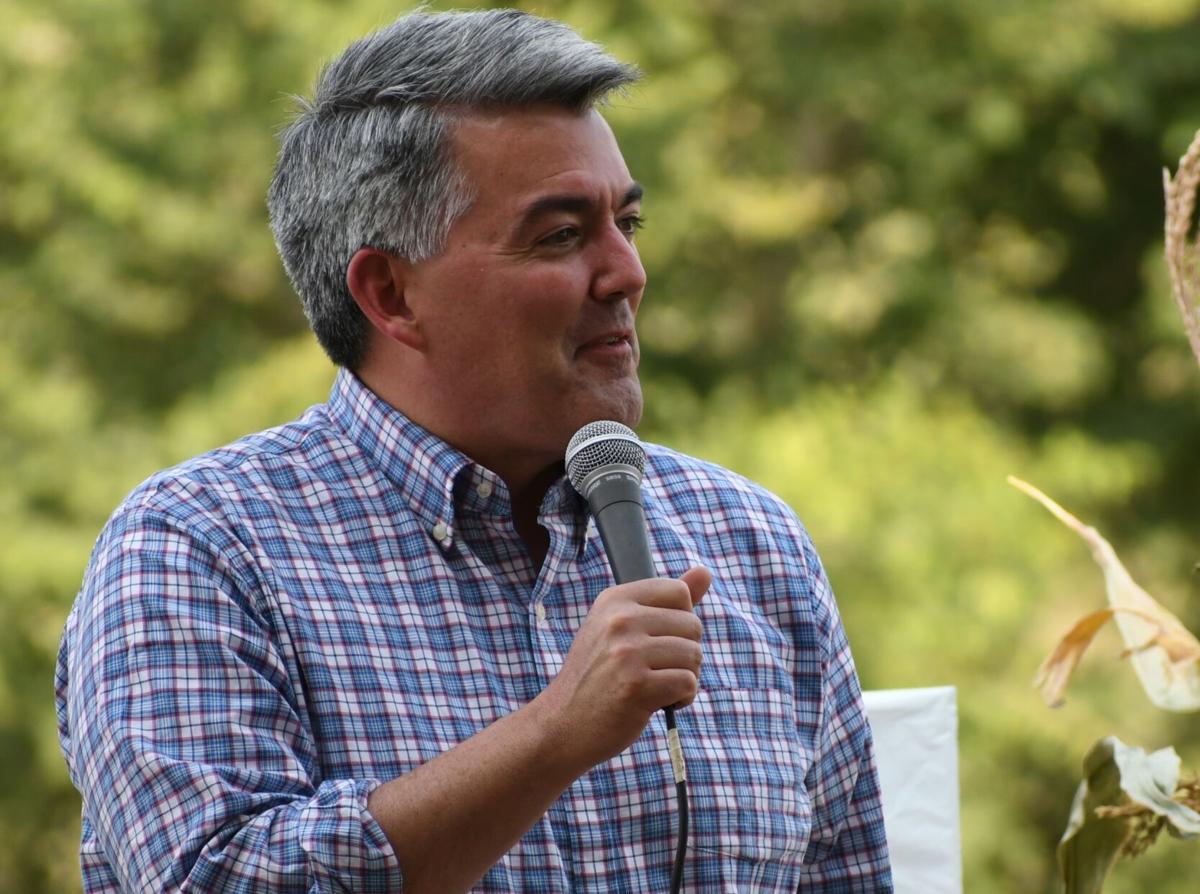 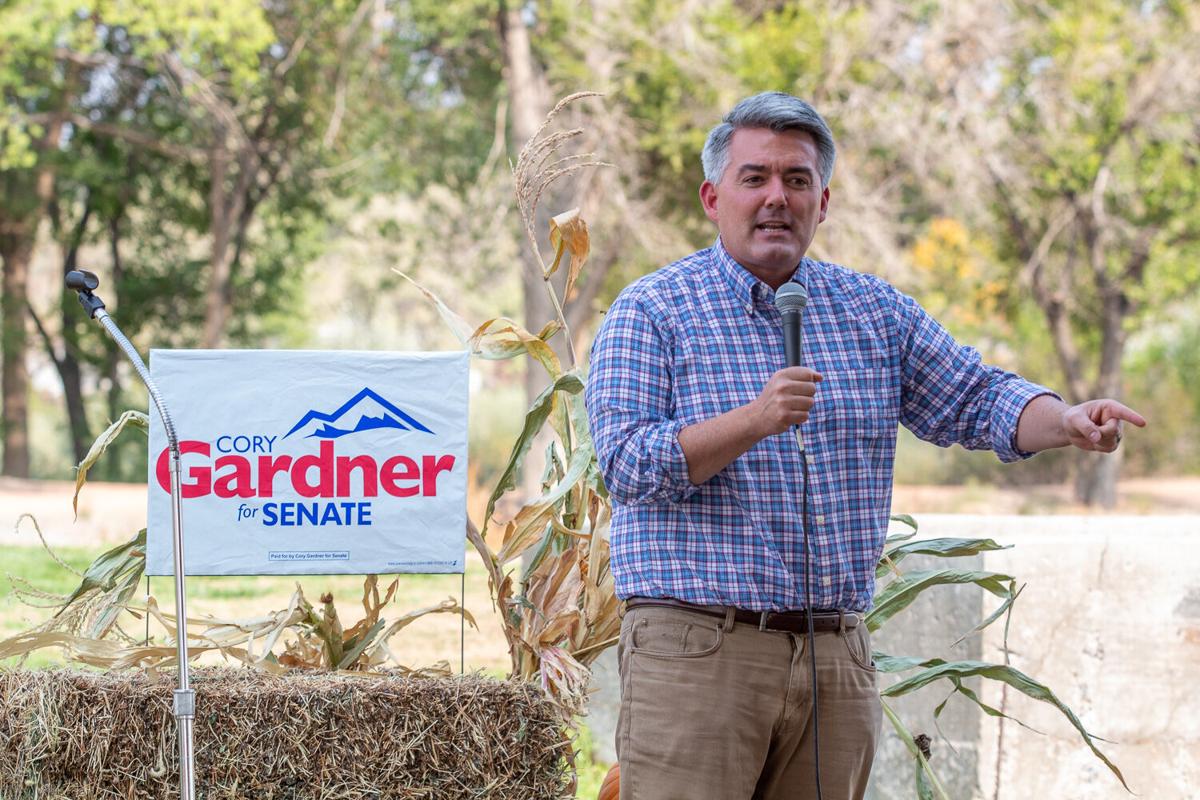 U.S. Senator Cory Gardner explains the importance of this year's election to his conservative crowd, going into preserving the electoral college and standing by the founding fathers' vision for the country. 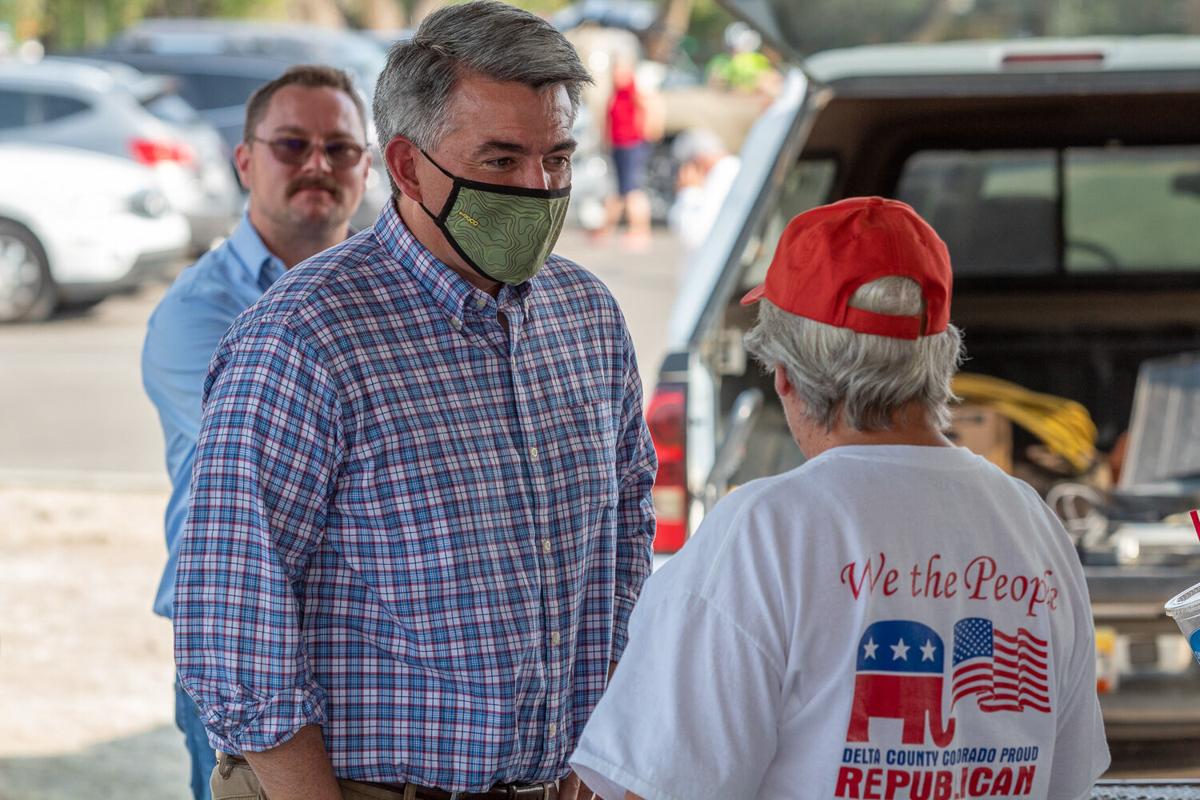 Sen. Cory Gardner visits with his audience following his speech. 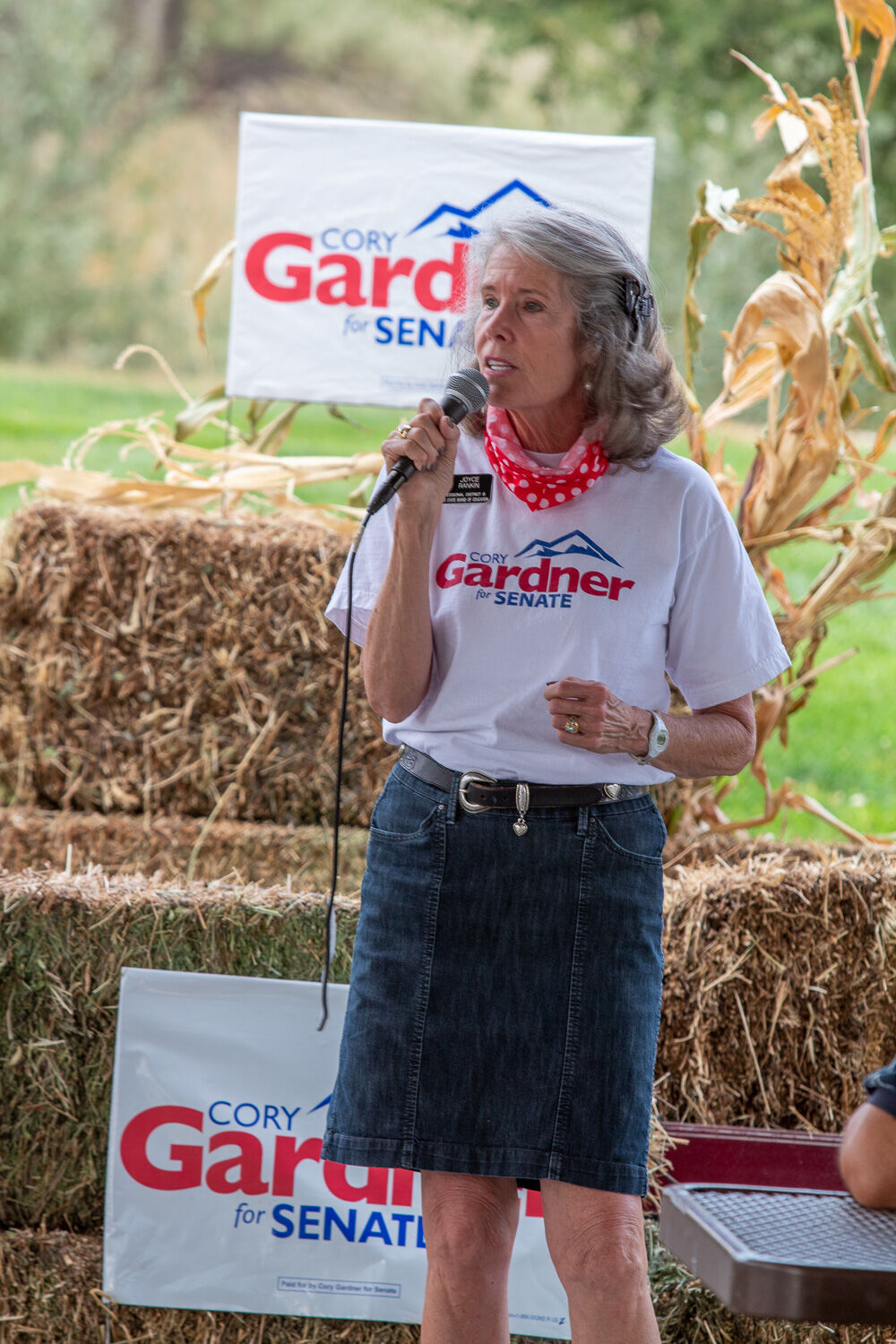 Joyce Rankin, candidate for the Colorado Board of Education, also made an appearance at the event, standing for parents and children in the education system, supporting critical thinking and an environment in which children take advantage of the technology available to learn.

State Rep. Matt Soper (left) hands the microphone over to U.S. Senator Cory Gardner during a recent stop in Delta.

U.S. Senator Cory Gardner explains the importance of this year's election to his conservative crowd, going into preserving the electoral college and standing by the founding fathers' vision for the country.

Sen. Cory Gardner visits with his audience following his speech.

Joyce Rankin, candidate for the Colorado Board of Education, also made an appearance at the event, standing for parents and children in the education system, supporting critical thinking and an environment in which children take advantage of the technology available to learn.

Senator Cory Gardner on the campaign trail with less than 50 days until the election was met by an enthusiastic crowd Friday afternoon under the Lions Pavilion at Confluence Park.

“If there’s one thing I know, a good ol’ fashion political rally solves a lot and to be able to have our United States Senator come to Delta, Colorado, and be able to talk to us, meet us one-on-one and shake our hands. I mean that’s just about the greatest that can happen,” Soper said to the large audience.

Gardner standing in front of a flatbed trailer decorated with red, white and blue campaign signs, hay bales and bright orange pumpkins ramped up the crowd.

“We are going to win in November. We are going to win because we believe in freedom in this country, the opportunities of this nation and the men and women who have fought for our county,” said Gardner over the applause of his Republican audience.

The first term senator from the Eastern Plains, boasted about bringing the Bureau of Land Management “out of Washington” to Colorado in order to have more “common sense decisions.”

When asked about a recent lawsuit against the BLM’s plans to open up oil and gas leasing in the North Fork Valley, Gardner walked a tightrope between supporting energy development and protecting the environment.

“I am a passionate advocate for agriculture and I believe in energy production, but I believe that that energy production has to be done following the rules and regulations and done where it is appropriate. And that needs to be decided by the people working with their land management agencies so whether it’s the Forest Service working on it or the BLM working on it, they need make sure their voices are heard ... and the processes of those decisions being carried out with local input being involved,” said Gardner again emphasizing his role in bringing BLM headquarters to Grand Junction.

“They can travel from Paonia to Grand Junction and see the leadership of the BLM. That was the most important thing for me to have those decisions be made by people local, because 99% of the acres of the Bureau of Land Management are west of the Mississippi River...it’s just when it gets to Washington D.C that things change ... that’s why I wanted it to be those local voices.”

Gardner said he would make sure the BLM knows about the feelings and sentiments of the citizens in the North Fork Valley over recent oil and gas leasing decisions.

On the issue of a festering national political divide, Gardner said it’s hard to judge how divided the country is when looking back at history.

“You know they used to tar and feather people and they used to do all kinds of things and there are a lot of passions right ... but I take great pride in being bi-partisan, I am the third most bi-partisan member of the senate,” he said.

“The most significant investment in public lands in this country’s history in terms of dollars that we put into it. It’s the biggest conservation bill in over fifty years and making sure that’s implemented is going to be an incredibly important issue and getting through this pandemic.”

With Congress hitting a stalemate on the CARES Act, Gardner said he hopes they can revisit the matter. He said the details are being worked out which includes funding for education, more money for the Paycheck Protection Program including a second round for loans, funds for the United States Post Office, a covid vaccine, child care, personal protection equipment and unemployment benefits.

“I am hoping we can get that done. I am not willing to tell somebody who hasn’t had a job in six months that because I didn’t get some provision in the bill that they can’t get their unemployment. That’s just not the way that should work.”

Why did they die?