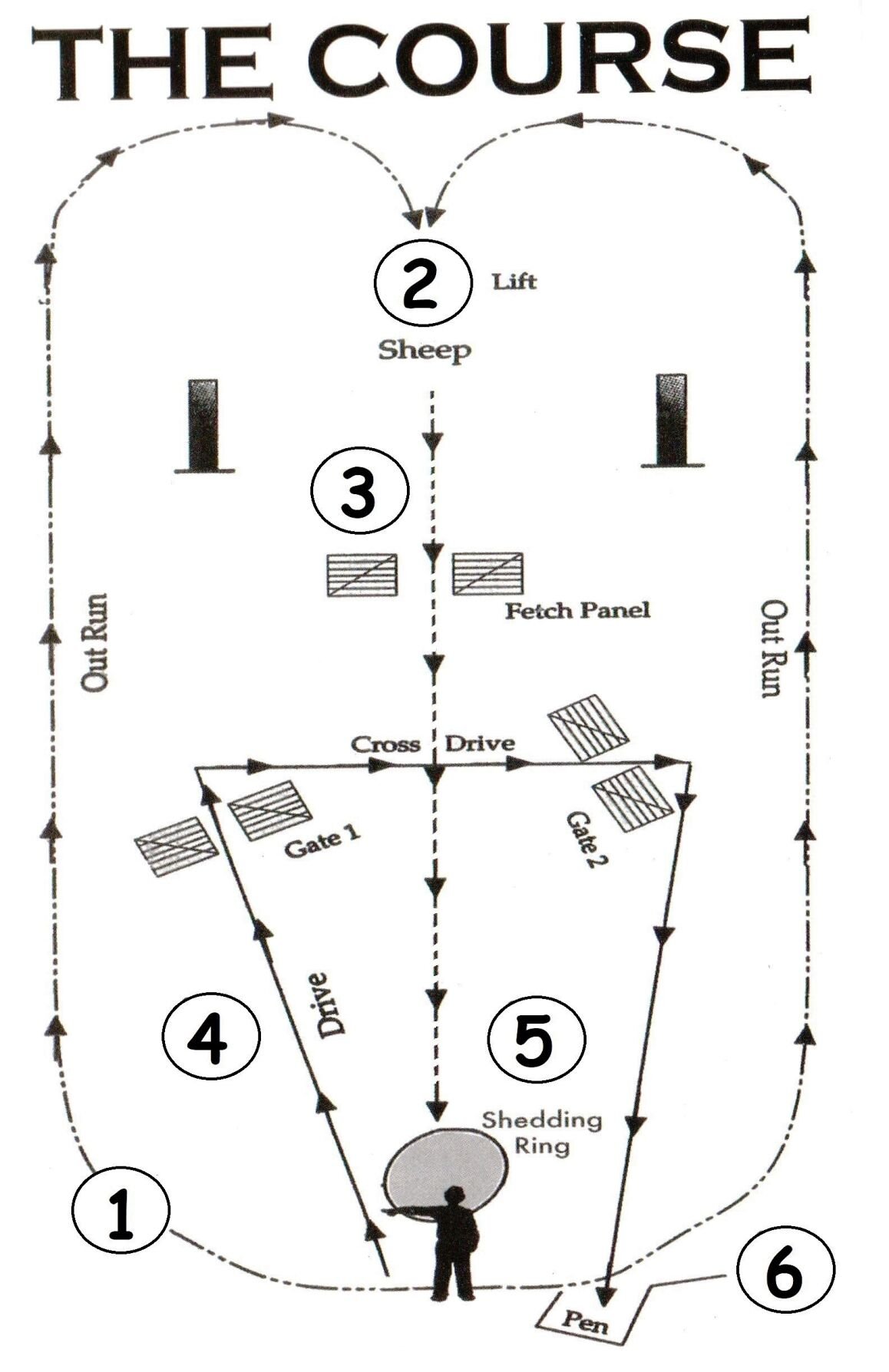 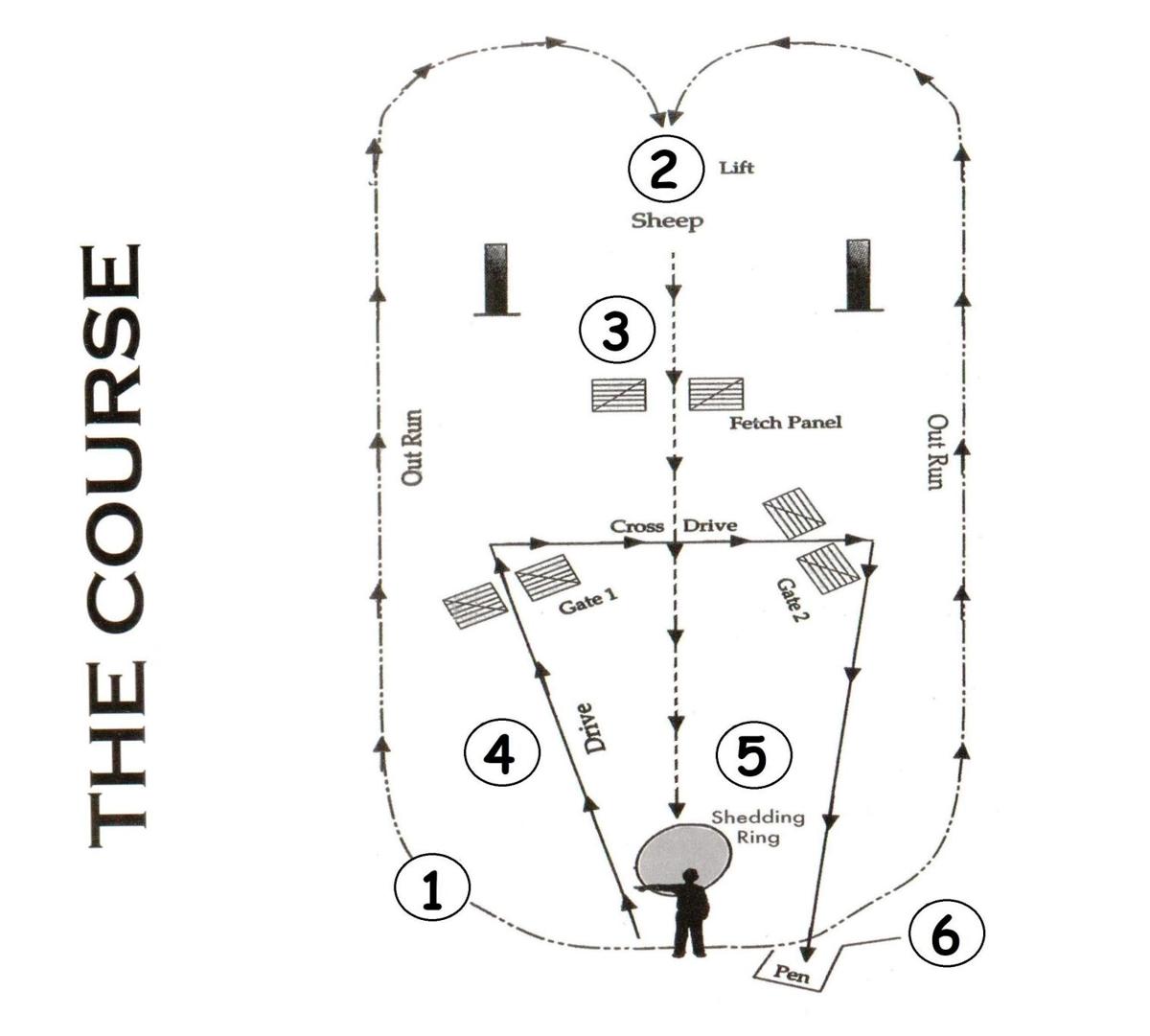 The Hotchkiss Sheep Camp Stock Dog Trials are set for this weekend. For times and a general order of events, see the front page of today’s DCI. The trial course is designed to test a dog’s ability to maneuver sheep in a calm, controlled manner. According to the 2019 Stock Dog Trials brochure, “There are six scored parts of a course run, each designated to test a skill that working dogs need to help a shepherd with the daily management of sheep.” The layout of the course may vary slightly from trial to trial and some levels of competition do not require completion of all elements of the course. The event announcer will clarify which elements of the course apply to a given level of competition. Competitors who take on the full course begin with 100 points, with points deducted for mistakes. The diagram shown is a typical layout for an open class course. The pro/novice and nursery competitors will run a shorter course. The novice course is even shorter since it’s a beginning event for young dogs in early training.

1. Outrun (20 points): The dog and handler start at the handler’s post where the dog must stay until the sheep are “set” at the far end of the field. The handler may send the dog either to the left or right, and the dog’s outrun should be pear-shaped, neither too straight nor too wide. And the outrun must be a sufficient distance from the sheep not to disturb them. Points are lost if the dog crosses the course, stops, or if commands are given during the outrun. This is the only element of the course during which commands are penalized as the outrun tests the dog’s natural ability to run out and find sheep.

3. Fetch (20 points): Once the sheep are lifted and, on the move, the flock should be brought, at a steady pace, through the gates to the handler. Points are deducted if the sheep miss a panel or fail to move in a straight line. The fetch ends when the sheep have passed around and behind the handler (moving in a direction determined by the judge). At this point, the drive begins. The judge can deduct points for rushing, slowness, too many commands or other faults.

Collectively, these first three elements are known as The Gather. Should any ties exist at the close of the trial, the dog with the best gather score generally prevails.

4. Drive (30 points): The drive usually takes place in a triangular pattern and can be run either from left to right, or right to left. The first leg of the triangle begins immediately as the stock pass behind the handler. The sheep are required to go in a straight line to the first set of gates. The straight line is considered to be roughly the width between the panels, which is 21 feet. Whether the first gates are made or missed, the sheep should be turned, on a direct line, across the course to the second set of gates. When these gates are either made or missed, the sheep should be turned, as neatly as possible, onto a straight line to reach the shedding ring or pen — whichever is required. Throughout these maneuvers, the dog should show obvious ability to drive the sheep steadily without excessive commands from the handler. Turns at the post and both gates should be reasonable. Difficult situations and the disposition of the stock will be taken into consideration, but any deviation from the line, missing gates or other faults will be penalized.

5. Shed (10 points): Shedding (or separating) is done inside a ring in front of the handler. The ring is 120-foot in diameter and clearly marked. As soon as the first sheep enters the ring, the handler goes into the ring to assist the dog. The team of dog and handler is generally asked to separate two sheep from a group of four or five. In an ideal shed, the dog comes through the sheep toward the handler, separating two sheep and holding them away from the rest. The shed is not complete unless the dog is in control of the two sheep. The judge “calls’ the shed when it is complete, at which time the handler may go to the pen.

6. Pen (10 points): With the shed completed, the handler proceeds to the pen, leaving the dog to reunite the sheep and bring them to the pen. The pen has a gate to which is attached a 6-foot rope. Once the handler takes hold of the gate rope, he or she cannot let go until the sheep are in the pen and the gate is closed. The handler may assist the dog, but over-assistance should be penalized. Penalties are also assessed if the sheep circle the pen or break away from the pen. A dog’s unsteadiness, rashness or other faults will also be penalized.