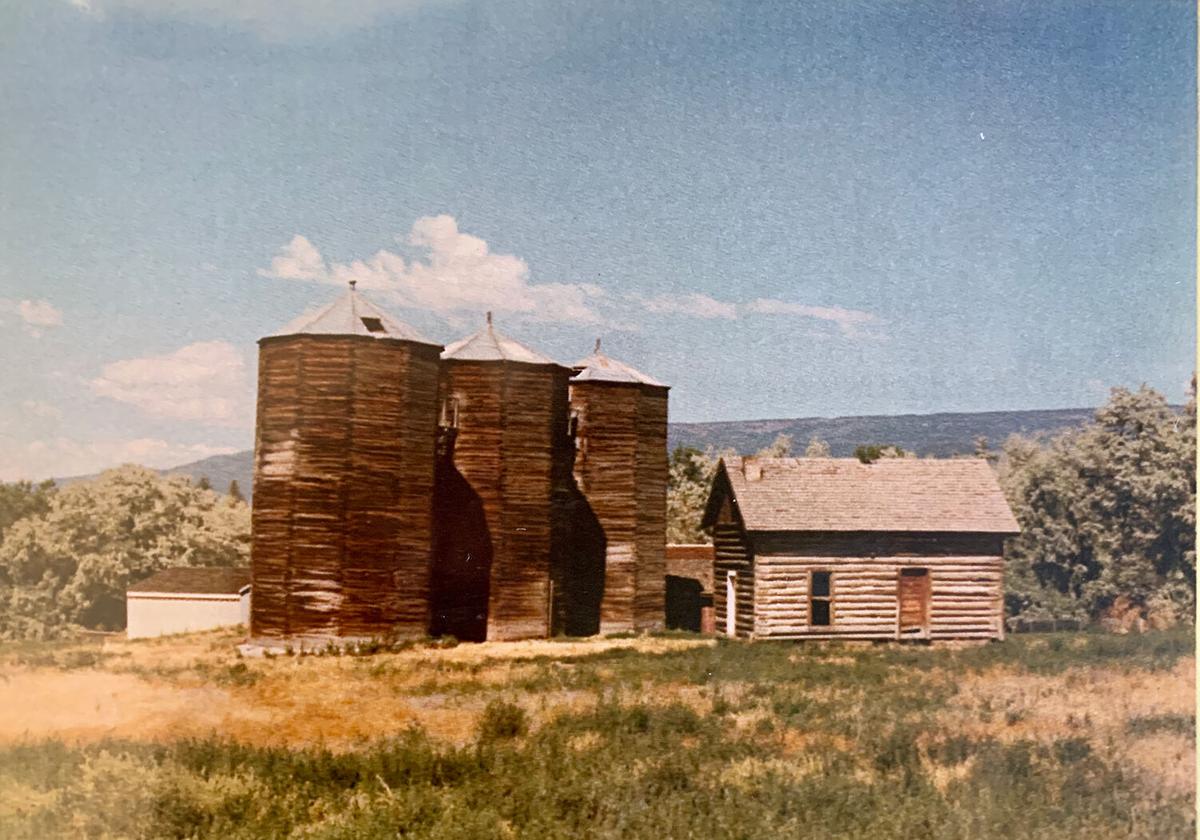 The Peterson cabin sits at the Pioneer Town Museum location as one of the first structures to arrive. 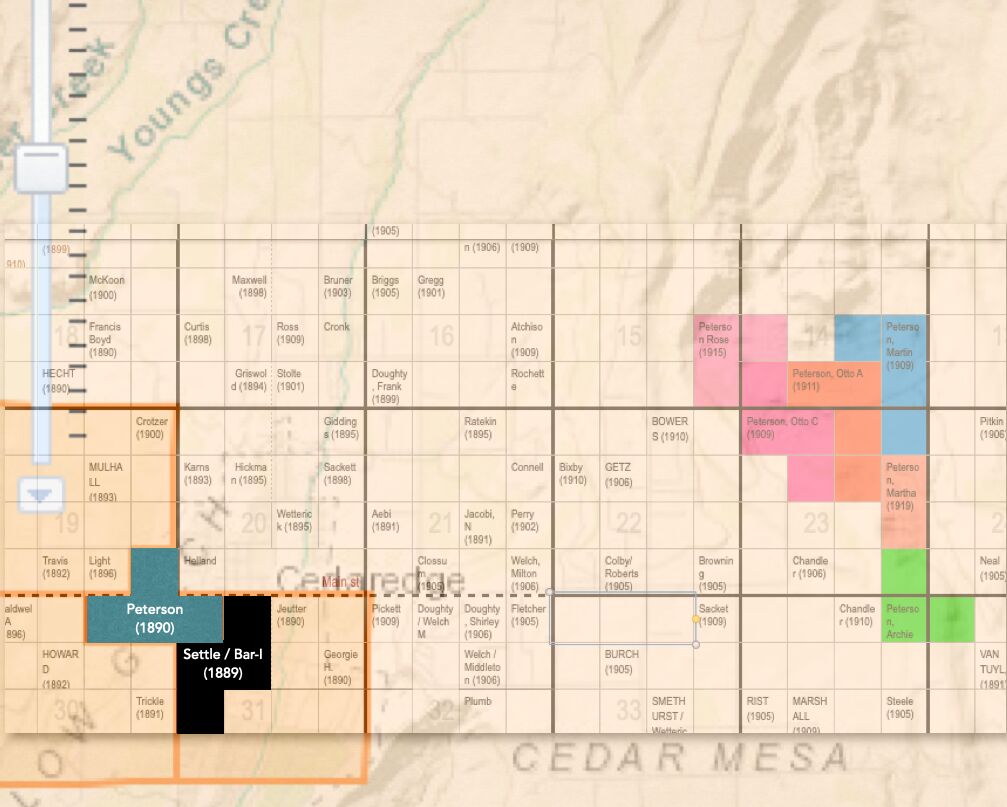 A map shows where the Peterson family homesteaded throughout the years, eventually ending up in the area of Cactus Park on Cedar Mesa. 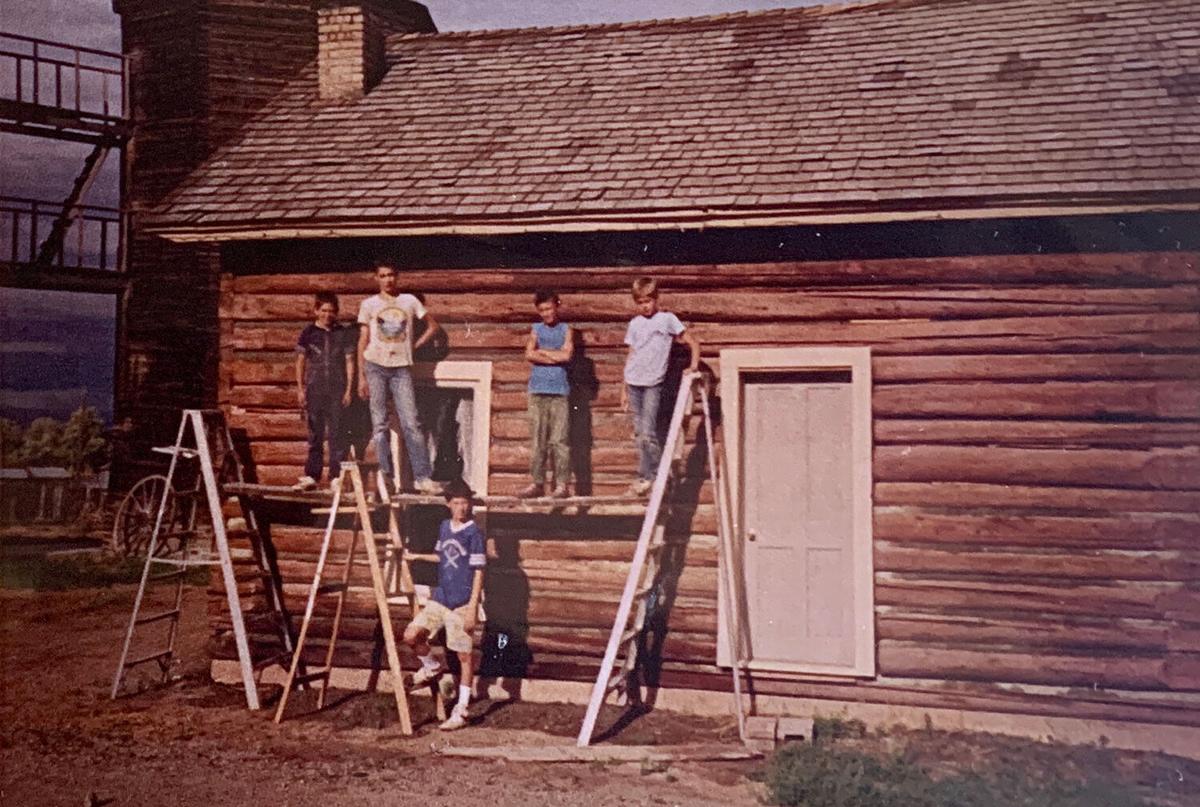 A local boy scout troop chinks the Peterson cabin in the 1980s as part of Nephi Thompson's Eagle Scout project. 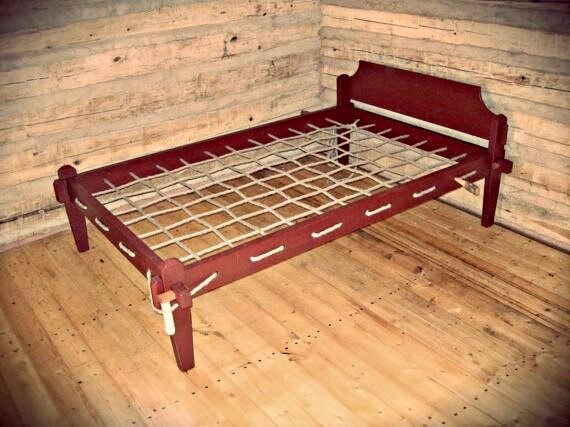 A turn-of-the century rope bed still sits on display in the cabin at the Pioneer Town Museum.

The Peterson cabin sits at the Pioneer Town Museum location as one of the first structures to arrive.

A map shows where the Peterson family homesteaded throughout the years, eventually ending up in the area of Cactus Park on Cedar Mesa.

A local boy scout troop chinks the Peterson cabin in the 1980s as part of Nephi Thompson's Eagle Scout project.

A turn-of-the century rope bed still sits on display in the cabin at the Pioneer Town Museum.

The cabin is now on the premises of the Pioneer Town Museum.

“The cabin arrived at Pioneer Town before many of the other buildings, including the Welcome Center, and originally served at the museum’s gift shop,” McHugh said.

The Petersons, the family behind the cabin that became a museum artifact, filed the homestead papers for their 160 acres of property on the west side of Cedaredge, where Otto A. Peterson built the now-historic cabin, McHugh said. They’d come from the Cory area, which is the first place they settled.

While the Peterson’s were originally in Cory where they made their breakthrough in the fruit industry, they never homesteaded there, McHugh said. At the Cedaredge cabin, Otto A., his wife Martha Jane and their nine children lived in close quarters.

“The story goes that all nine children bathed in a tub every week using the same water,” McHugh said. “The father always bathed last.” This was not particularly out of the ordinary at the time, especially in a family with nine children, all of whom slept upstairs in a cabin.

According to McHugh, Otto A. built the cabin exclusively from lumber he cut from the Grand Mesa, though this projected was preceded by somewhat of a setback.

McHugh referenced a smaller shed that may still on the property where the cabin used to be. Otto A. built that as well.

“He didn’t get enough lumber here to build the whole cabin, so he just built that shed the first year and lived in it the first winter, and the next year, Otto Sr. finished the cabin,” McHugh said. “Today, that same cabin shows visitors to Pioneer Town in Cedaredge what home life might have been like at the turn of the last century.”

Decades later, a grandson of Otto A. and Martha Jane, Archie Peterson along with his wife Dode, were part of the original core group that started the Pioneer Town Museum in the first place. When the old Peterson cabin came to the museum, Archie and Dode supervised the placing and fitting on location, with help from other people from the community.

To restore it from its neglected era as a cow shelter, the community took part in that as well. McHugh presented a photograph from the 1980s, soon after the cabin was moved, in which a local boy scout troop chinked the cabin as part of an Eagle Scout project of Nephi Thompson. This was a process in which the scouts filled in the spaces between the logs bringing the cabin an important step closer to full restoration.

Thanks to the size and prominence of the Peterson family as early settlers, the Petersons had a higher chance of creating a large family presence in the tiny town of Cedaredge in the late 19th and early 20th centuries, and they did. McHugh provided a homestead map that shows property owned by six different Petersons, all in the Cactus Park area of Cedar Mesa and all adjacent to each other.

One of those properties was owned by Otto A., who ultimately did homestead on Cedar Mesa in 1911, as the map shows.

A noteworthy offspring of Otto A. was his and Martha Jane’s son, Otto C., who was mentioned regularly in the Champion.

Otto C. was the game warden and the Surface Creek Champion had several documentations of him. In the July 30, 1925 article “OTTO PETERSON IS IN THE LIME LIGHT AGAIN,” Otto C. was accused of inflicting “painful bodily injuries,” and was arrested during the incident, which included a sportsman’s association using dynamite on fish. He was quickly released on a $100 bond after defending himself against those claims.

Another time, Otto C. was shot while searching the premises of a sawmill in search of H.W. Edwards, who had allegedly been suspected of killing deer and protected animals. It was Edwards who shot Otto C. in the shoulder, and he was tried for attempted murder. The Surface Creek Champion indicated that Otto C. recovered quickly in saying, “The wound is healing nicely and he will be on duty again in a few days.”

Otto C. also went on trial for shooting William Besgrove in 1907 in an incident with little documentation in the Champion. His bond was $250 while Besgrove’s was $200 to appear in court.

The Champion referred to Otto C. more than once as “fearless Game Warden Otto C. Peterson.” Otto C. died while still holding the job of game warden at 54 years old. His death was attributed to a blood clot in the heart following a ruptured gallbladder.

In regards to documentation of the other children, McHugh observed at one point that, during a time when the Champion gave occasional school reports on honors and attendance, the Petersons were often mentioned for the latter.

“There was a lot of absenteeism or tardies,” McHugh said. “I’m sure it was hard to get nine kids to school in the morning.”

The Petersons stuck around, to the point that descendants of Otto A. and Martha Jane Peterson are still in the area.

At the time of their deaths, Otto A. and Martha Jane were each recognized by the Surface Creek Champion as original settlers. In the Jan. 29, 1915 issue, the paper notified of Otto August Peterson’s death, saying “At eight o’clock last Friday morning occurred the death of Otto August Peterson, one of the oldest settlers of the valley.”

Martha Jane’s death was 14 years later, as the paper noted on March 28, 1929, “Death took away another of the country’s real pioneers last Friday evening when Mrs. Martha Jane Peterson passed to her reward.”

They were 60 and 72 years old respectively.

All the documentations of the Peterson family can be found in the digital archives of the Surface Creek Champion, which ran from 1904-1943 and can be found in its entirety at coloradohistoricnewspapers.org.

In the coming weeks, the SCVHS hopes to open the Pioneer Town Museum for the season — an opening that was delayed by COVID-19 restrictions. At that time, anyone who wishes can visit that very cabin which housed the Peterson family over a hundred years ago.