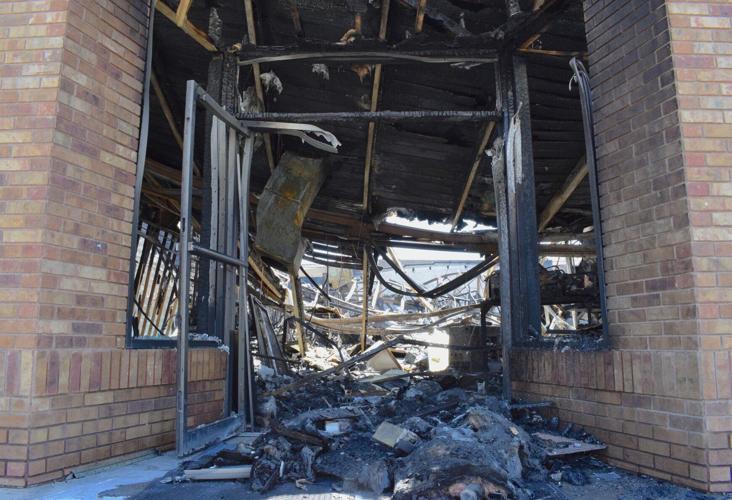 Charred insulation and other debris spills outside of the former front door of the Hartman Brothers welding store on April 21, 2022. 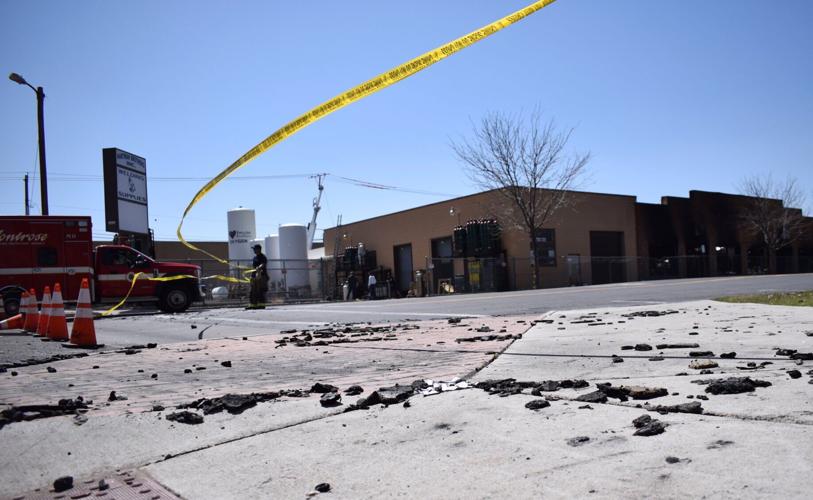 Debris from the fire the day before littered the streets and sidewalks in the surrounding area on April 21, 2022. 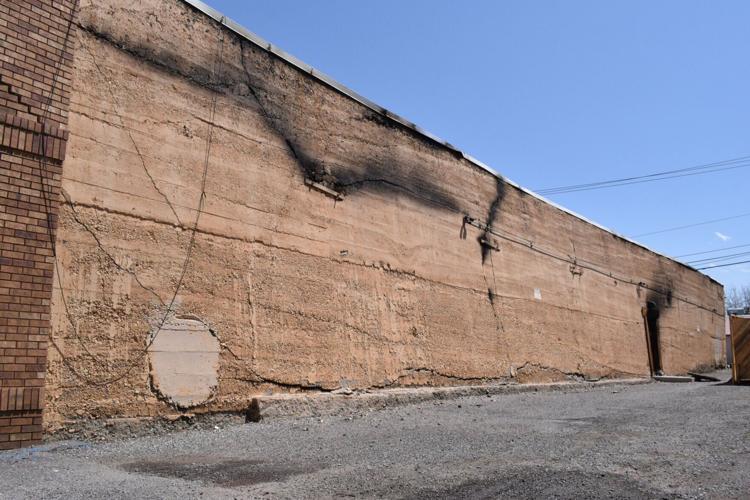 A fire on April 20, 2022 led to large cracks on the top and bottom of the western side of the Hartman Brothers building visible the next day. 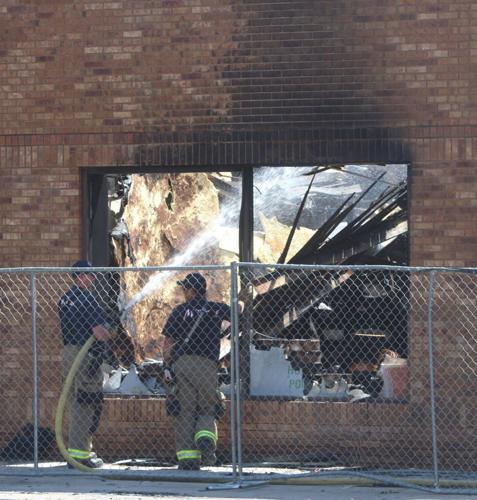 Firefighters spray water on the smoldering remains of the fire at the Hartman Brothers store on April 21, 2022.

Charred insulation and other debris spills outside of the former front door of the Hartman Brothers welding store on April 21, 2022.

Debris from the fire the day before littered the streets and sidewalks in the surrounding area on April 21, 2022.

A fire on April 20, 2022 led to large cracks on the top and bottom of the western side of the Hartman Brothers building visible the next day.

Firefighters spray water on the smoldering remains of the fire at the Hartman Brothers store on April 21, 2022.

Your purchase was successful, and you are now logged in.

A receipt was sent to your email.

When a loud boom sounded in downtown Montrose Wednesday afternoon, people who heard it thought perhaps something had fallen from the nearby police building construction site.

Very quickly, they realized it was something else: at about 3 p.m., a fire erupted at the Hartman Brothers lot on East Main/North First Street, where oxygen is stored and sold.

The sound was an explosion and the fire ultimately destroyed a 10,000 foot welding and industrial supply building located behind Hartman’s medical supply storefront. Five people including a firefighter were hurt and multiple businesses on surrounding city blocks evacuated.

“We felt the explosion and we didn’t know what it was. The whole building shook. It really felt like it rolled,” said Tim Frates of MegaPixel at 509 E. Main.

Frates and his customer went outside.

“We thought it might have been something over on the construction site, but quickly realized that wasn’t it. Then someone came driving down Uncompahgre and said something was going on in the alley,” he said.

Frates saw fire engines roaring toward Hartman Brothers. Minutes after they stepped back inside, a police officer told him and his customer to leave the area.

Firefighters made the scene within three minutes of being dispatched, finding fire at the rear building, at 524 N. First St. In the alley between First and Main, firefighters located police officers and store employees who were tending to an injured party, MFPD Chief Tad Rowan said.

Crews raced inside the burning building to search for others; all employees were outside and accounted for, although another three people had sustained minor injuries. All four were taken to Montrose Regional Health for treatment.

Rowan said one of the firefighters sustained minor burns and also went to the hospital, bringing the total injured to five.

Four of the patients were treated and released, hospital marketing chief Leann Tobin said. A fifth was flown to UC Health in Denver.

A patient there matching the name another person provided to the Montrose Daily Press was listed in fair condition on Thursday.

Firefighters were acutely aware of explosives risk at the property, which contains several large oxygen storage tanks and other flammable liquids. The main task after making sure everyone was out of the building was to prevent the flames from reaching the medical oxygen supply side of operations.

“Our primary focus was to cool the fire and cool all those tanks,” Rowan said. If their contents had leaked, the fire would have burned hotter, faster and created an even more dangerous situation, he said.

“There was definitely significant risk of the containers failing and releasing product that would intensify the main body of the fire,” Rowan said.

The welding and supply shop is in close proximity to multiple other downtown buildings.

“There was a significant risk to the nearby buildings. Our primary goal was to get that cool to protect exposures and that medical oxygen facility,” Rowan said.

‘All hands on deck’

The magnitude of the blaze necessitated a multi-agency response from other firefighting agencies, the Montrose Police Department, Montrose County Sheriff’s Office and posse, the state patrol, city public works, county road and bridge, the hospital and others.

“At first, everyone thought it was construction on the (police) building or something falling off the roof,” Montrose Police Cmdr. Tim Cox said, relaying what officers told him. “Then we got several reports of possible explosions in the area of North First and Park (Avenue). The initial response was to a possible explosion. We had all hands on deck right away and were on scene within minutes.”

The police assisted with evacuations and traffic control. With assistance from the MCSO and posse, they blocked off nearby streets.

“It was quite a chaotic scene to begin with,” Sheriff Gene Lillard said. “Our firefighters did a wonderful job and EMS (emergency medical services), they were Johnny on the spot. They saved the day.”

Montrose Regional Health activated its “code orange” response, which is a system that kicks in when there is a possibility for a sudden influx of patients or a disaster.

“When dispatch said they had an explosion at Hartman Brothers and they didn’t know what we were going to get, we activated code orange,” Tobin said.

The hospital set up an incident command and called in available employees to the resource pool.

The hospital wanted to have a nurse in every ER room, just in case, she said. Doctors who are not customarily in the emergency room came in, including a pulmonologist, along with additional radiologists, lab workers and respiratory therapists.

Even employees in food services pitched in, preparing comfort food such as cookies in case multiple family members arrived.

“We all kind of have a job to do. We did activate that yesterday. Fortunately, we were able to send people home,” Tobin said.

“It’s very sad that we had five patients, but we also felt we were prepared to deal with those five patients and more, if needed.”

Medical providers outside the hospital offered help too, including Cedar Point Urgent Care and Delta Health.

“We drill for his. It is a requirement that we do drill for it. We activated what we needed to do,” Tobin said.

The fire tied up all of the fire district’s resources, making mutual aid critical.

At least one local business also reached out: Buckaroo’s Pizza brought down water and pizza for the first responders, which was gratefully received.

The Montrose Daily Press could not confirm whether there are other efforts to assist Hartman Brothers or the injured parties.

Response, investigation ongoingThe fire spared the medical supply storefront facing Main, but destroyed the welding shop, Rowan said. It was still smoldering there Thursday afternoon — because the roof had collapsed, at least two walls were at risk of falling in and it was not safe for people to go inside.

“There are no explosion risks at this time, however, at the building that had the main body of fire in it, there are structural safety issues we are concerned about,” Rowan said.

The debris may continue to smolder for a few days; the scene is being monitored and safety fencing was going up Thursday afternoon.

Rowan did not have a preliminary dollar estimate on the damage to the building. He said the business’ insurance company, the fire district and police are investigating the cause.

“The preliminary investigation indicated there was nothing criminal in nature,” Cox said.

“If it had spread, it would have been a lot worse. Whenever you deal with acetylene and oxygen bottles and mix with fire, it is volatile and dangerous,” Lillard said.

“They put themselves in danger to save a lot of people,” Cox concurred. “If the fire had gotten to those tanks, it could have been really bad.”

Frates was allowed back into his building late Wednesday evening. All was well, barring a slight smell that can be aired out.

He was more concerned about those fighting the fire.

“I swear, when I saw those firefighters, I thought this is as dangerous as it can possibly get for a firefighter, it seemed to me, with potential explosions and having to potentially rescue people from inside the building,” Frates said.

“I didn’t think it got any more dangerous.”

This story originally appeared in the Montrose Daily Press.

Check your email for details.

Submitting this form below will send a message to your email with a link to change your password.

An email message containing instructions on how to reset your password has been sent to the e-mail address listed on your account.

Your purchase was successful, and you are now logged in.

A receipt was sent to your email.