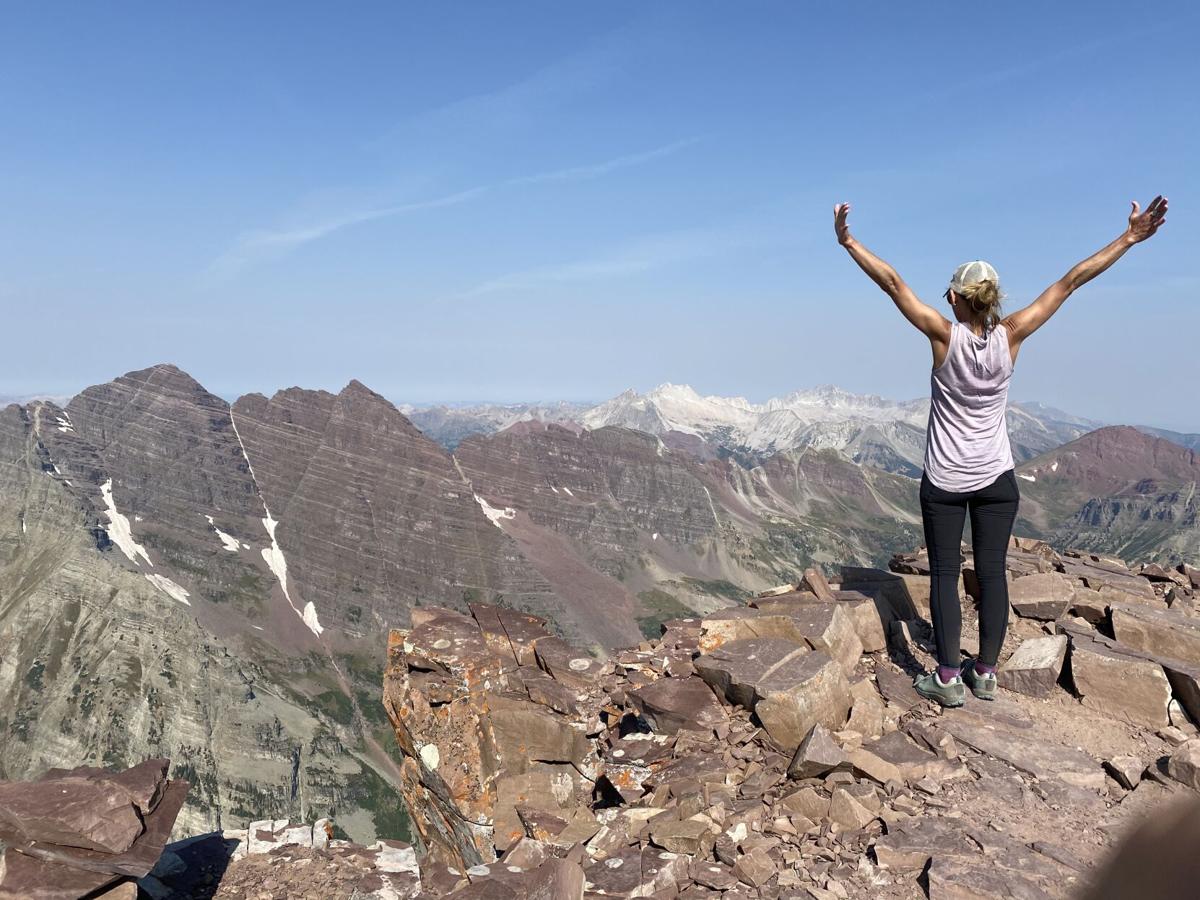 Henderson finishes at Pyramid Peak, looking out over the Maroon Bells. Pyramid Peak was the last fourteener in Colorado that Henderson had not yet finished. Now she's done them all. 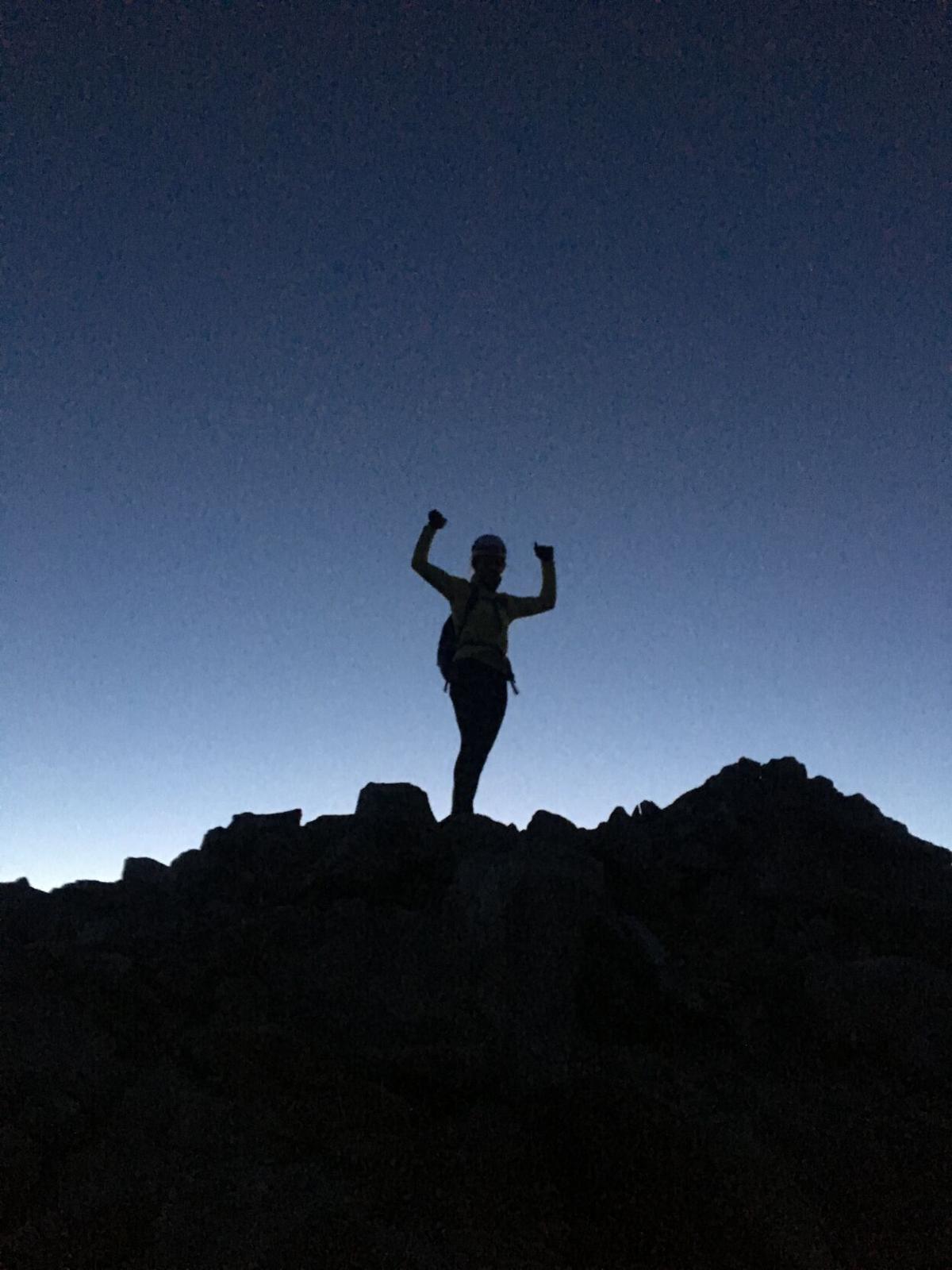 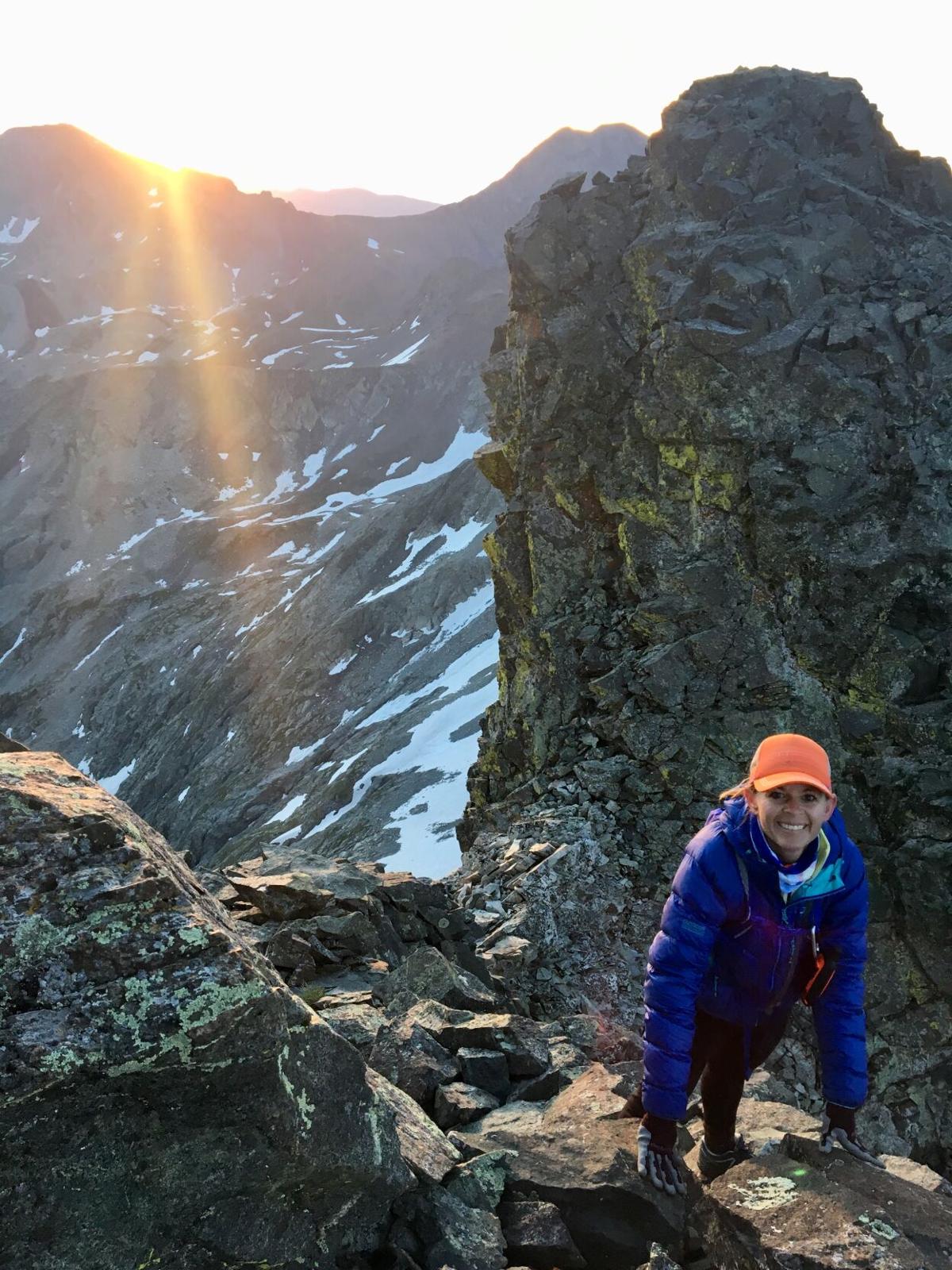 Blanca and Ellingwood traverse in the Sangre de Cristo Range. 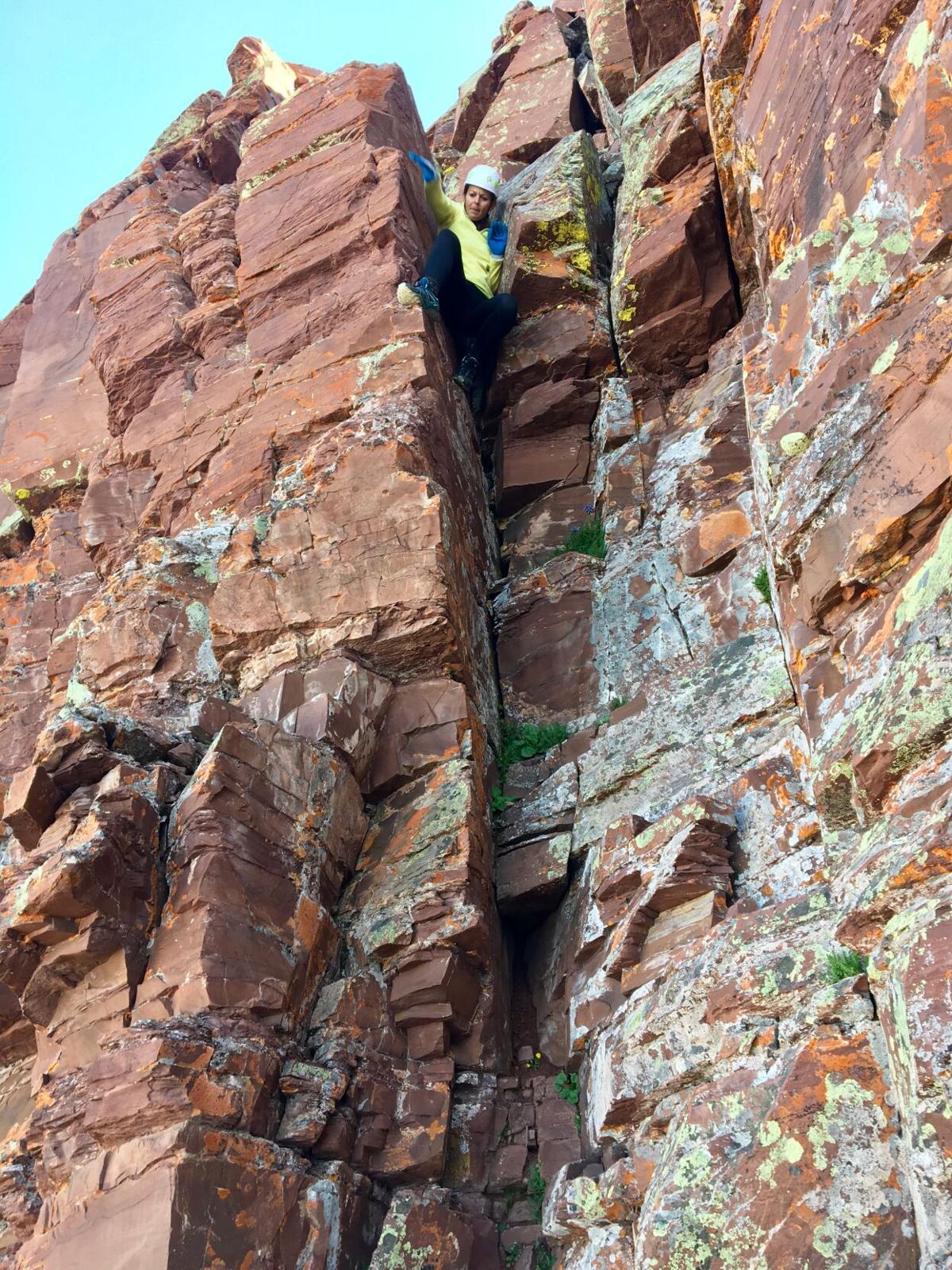 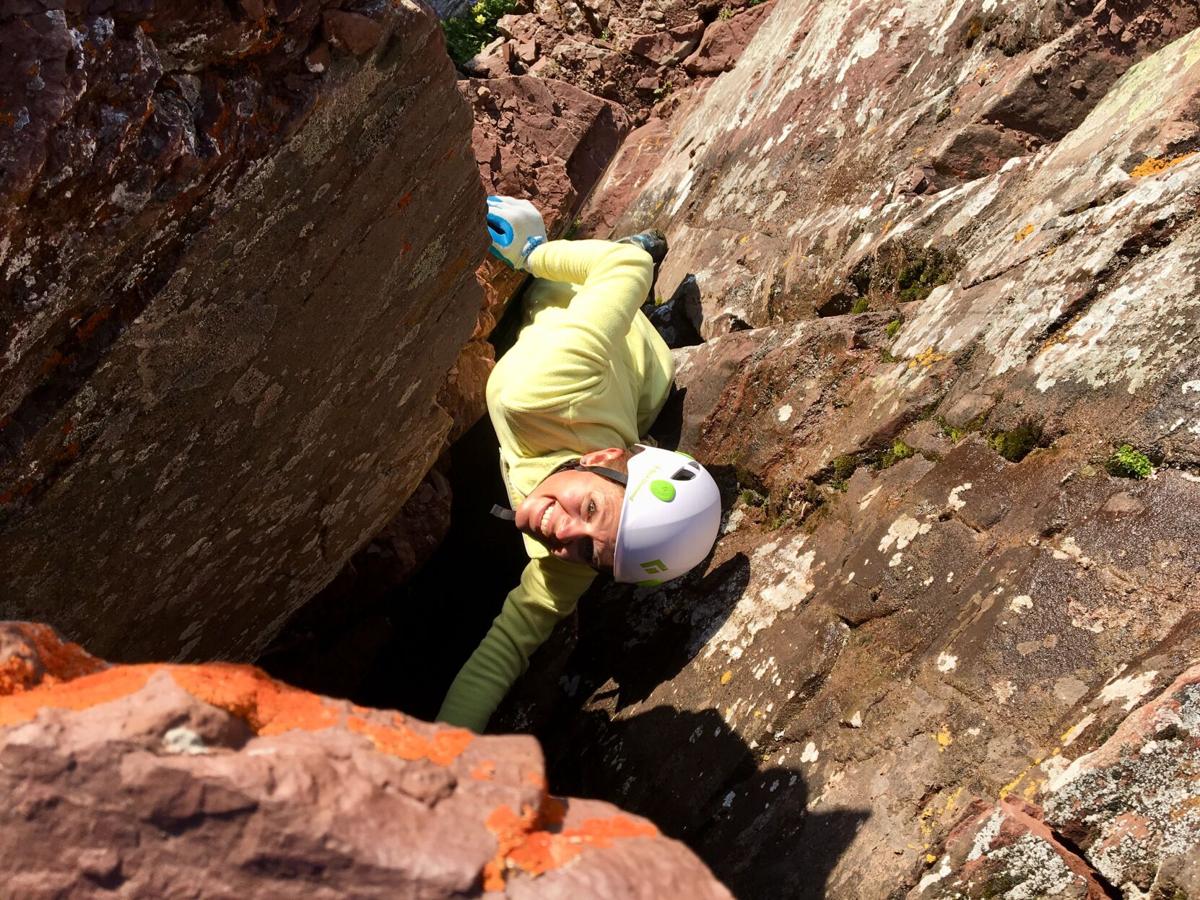 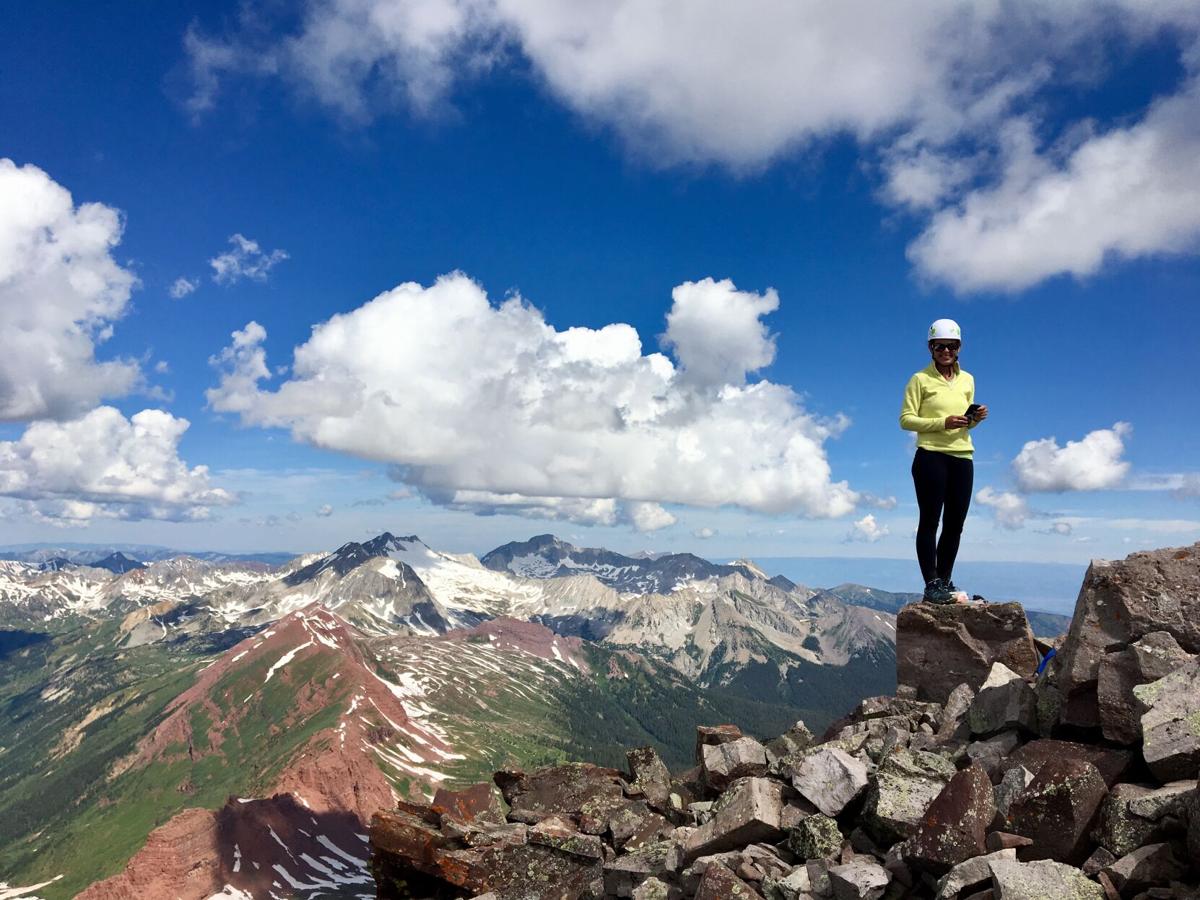 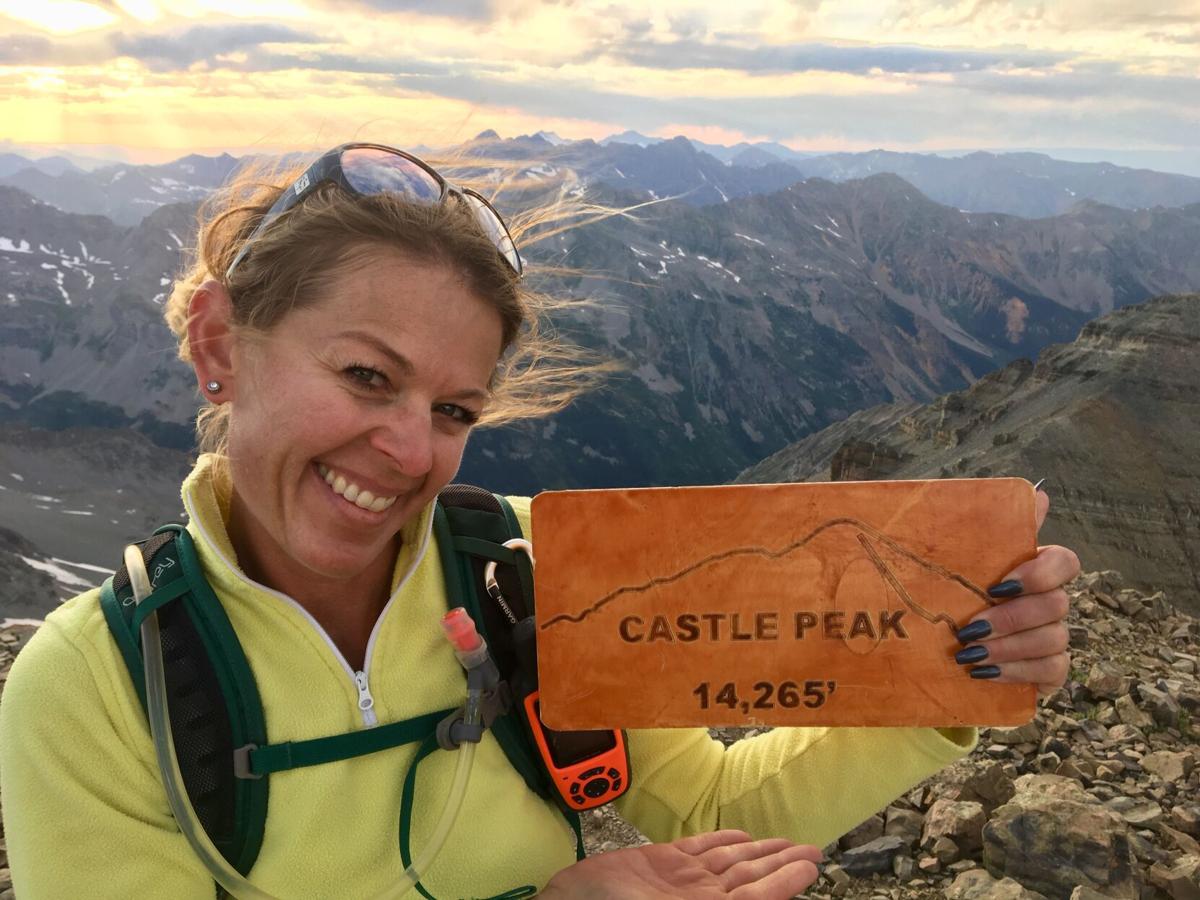 Henderson reaches the top of Castle Peak, at 14,265 feet. 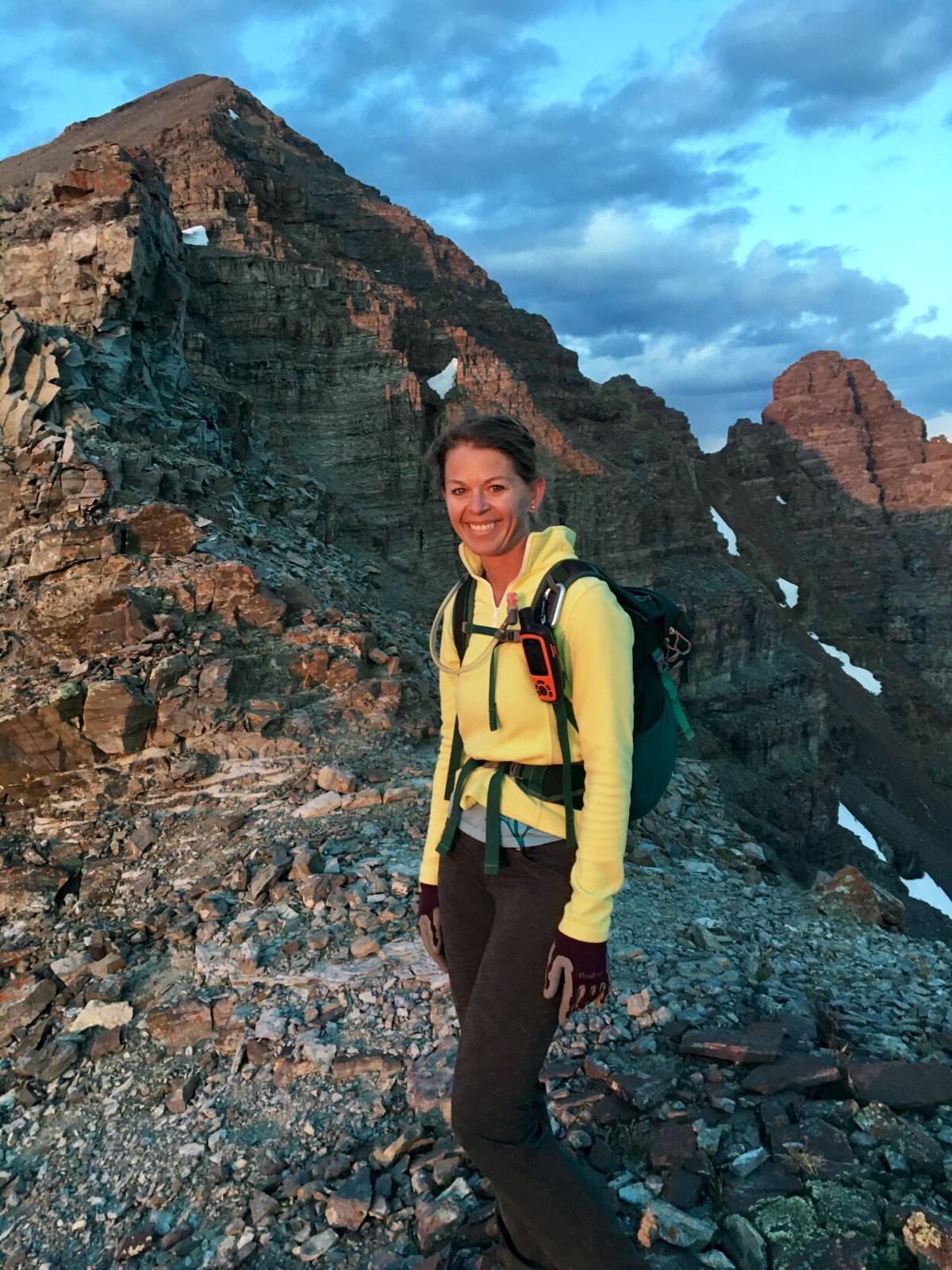 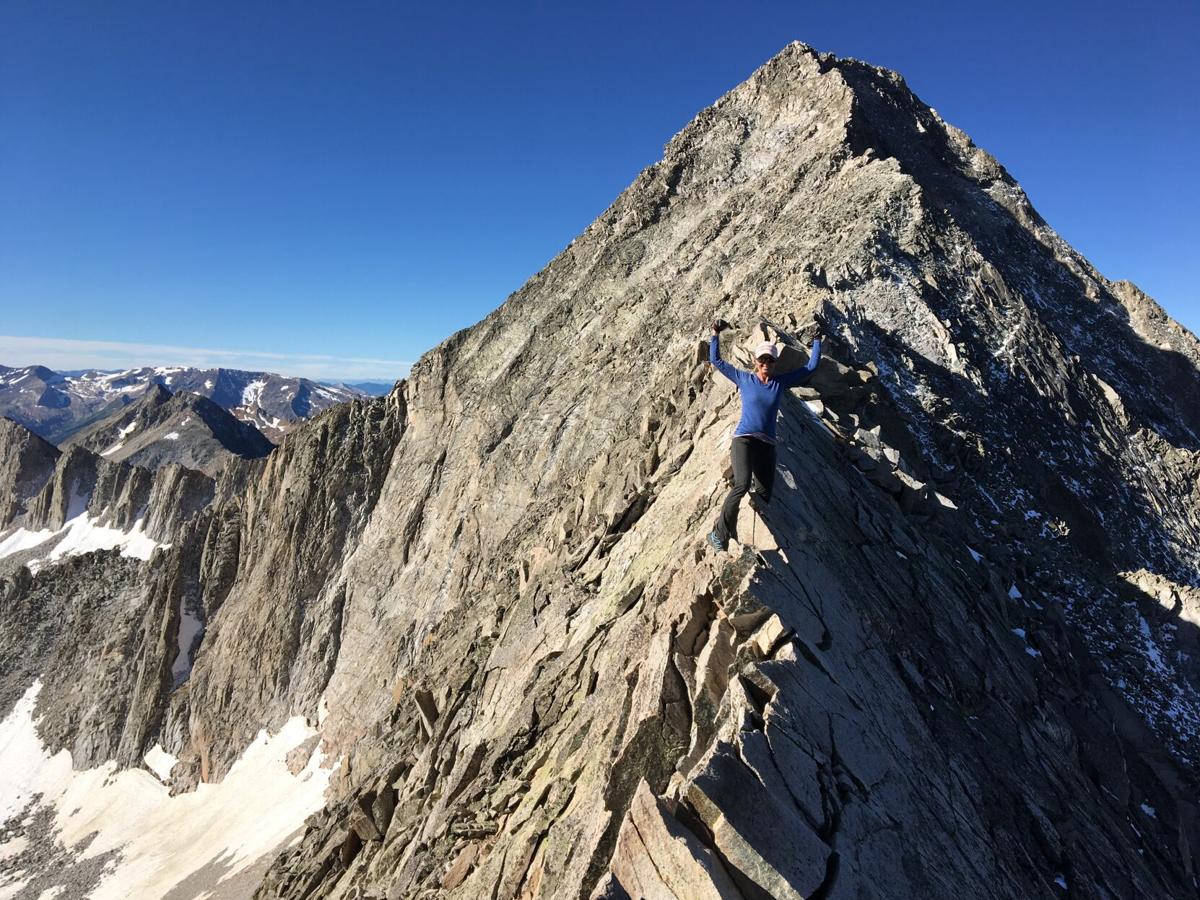 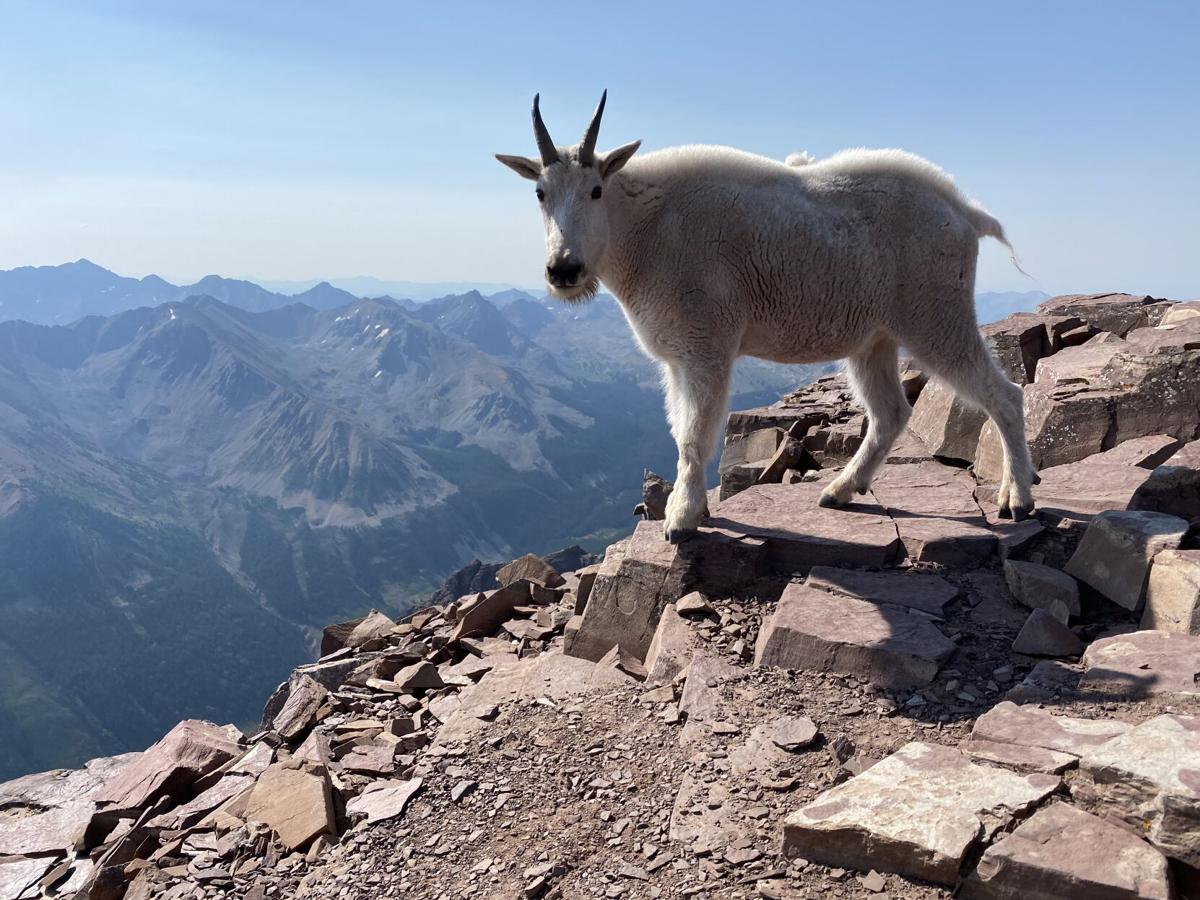 Henderson comes across a mountain goat high up on Pyramid Peak. 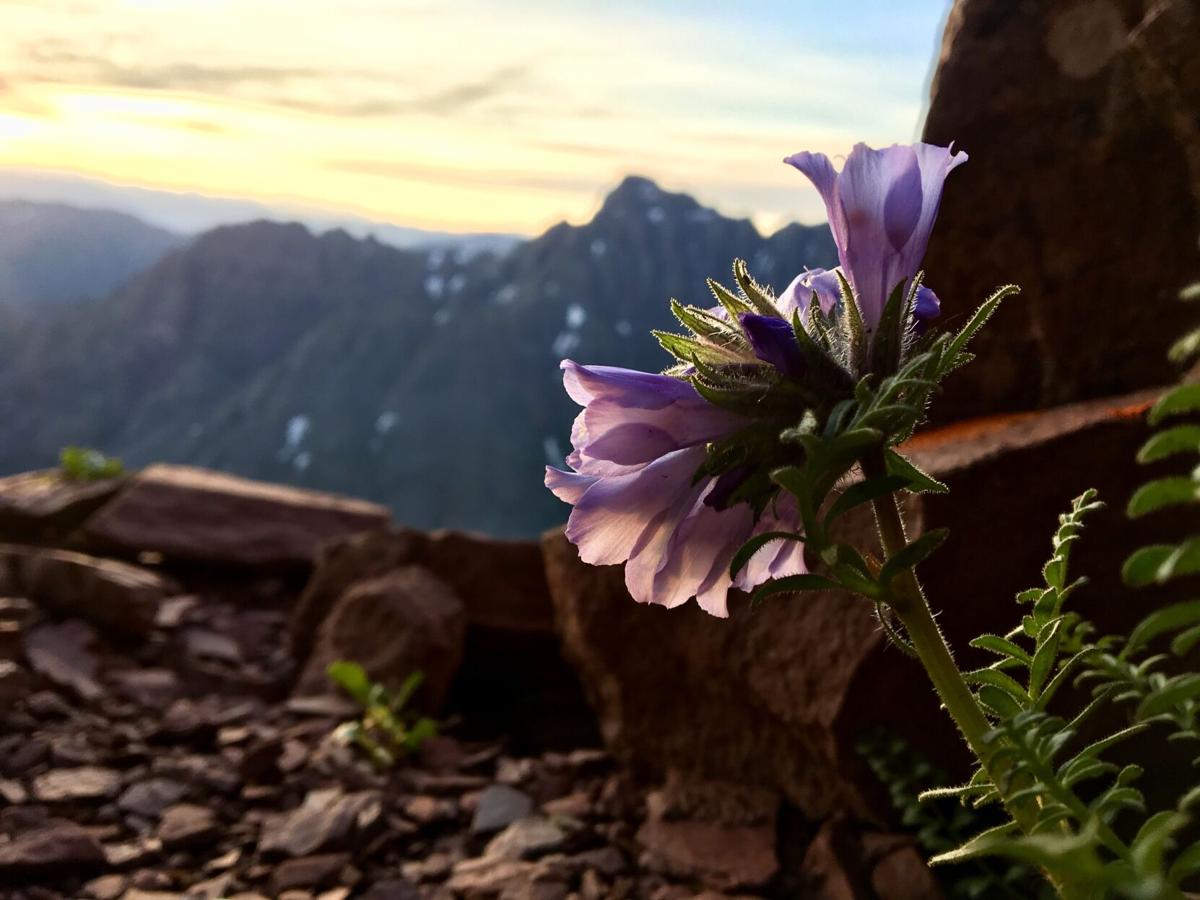 Beyond the flower, Pyramid Peak is visible from the north Maroon Bells.

Henderson finishes at Pyramid Peak, looking out over the Maroon Bells. Pyramid Peak was the last fourteener in Colorado that Henderson had not yet finished. Now she's done them all.

Blanca and Ellingwood traverse in the Sangre de Cristo Range.

Henderson reaches the top of Castle Peak, at 14,265 feet.

Henderson comes across a mountain goat high up on Pyramid Peak.

Beyond the flower, Pyramid Peak is visible from the north Maroon Bells.

Out here in the Western United States, there’s a term that flatlanders may be completely unaware of: fourteener.

A fourteener is a mountain peak that exceeds an elevation of 14,000 feet above sea level. For reference, Delta sits at approximately 4,875 feet. Out of 96 known fourteeners in the entirety of the United States of America, Colorado has 58 of those, more than any other state.

That makes Colorado a unique attraction for avid climbers who love the challenge of high altitudes and nearly out-of-this-world views from the top.

Locally, that includes Sarah Henderson, the owner of Grand Mesa Outdoors in Cedaredge, who finished climbing the last of Colorado’s extensive collection of fourteener mountain peaks in August.

For Henderson, Grand Mesa Outdoors is still a relatively new venture, as the outdoor supply store only opened in November of last year. She’d left a comfortable and stable management position with Tractor Supply, deciding that she wanted to not only live the dream in her spare time, but to also follow suit in her line of work.

By the time she opened Grand Mesa Outdoors, she had only four fourteeners left to climb.

“I live what I do for work for sure,” Henderson said. “I had a great career [with Tractor Supply], I was with them for many many years. It was a wonderful place to be, but this is my dream.” She resigned shortly before opening her store in November.

In that store at this time, a feature wall of photos of various fourteeners can be quickly seen at the back of the store, showing countless adventures that took place much higher than home.

Henderson said she hadn’t made a conscious decision to climb all of Colorado’s fourteeners at the time she’d climbed her first. She made that goal later on, possibly after she’d done around 20, she guessed.

“I just have always gravitated toward peaks and I grew up in Hotchkiss,” Henderson said. “I’d been in the Elks my whole life and it just seemed like a good idea one day.”

Nothing ever goes right the first time, of course, and Henderson recalled she was unfortunately unprepared when she went to climb Sneffels.

“I climbed in denim capris, a little wind breaker and a pair of tennis shoes,” Henderson said. “I look back at that picture, so ridiculous, I actually have it here.”

Nevertheless, it started her journey. Henderson has a copy of the book “Colorado’s Fourteeners,” which gives extensive information on all 58 fourteener peaks. In the table of contents, Henderson wrote the dates next to each peak as she completed them, finally finishing with Pyramid Peak on Aug. 17, last month.

Along the way, Henderson redid a few nearby favorites. She figured that her favorites overall included Wetterhorn, which is in the northern San Juan mountains, and Crestone Needle in the Sangre de Cristo Range of the Rocky Mountains. Wetterhorn’s peak is “spectacular” and Crestone Needle was a wild adventure in which it took Henderson eight hours to climb the peak before continuing on to climb the needle.

She’s done all the state’s fourteeners now, but Henderson’s not one to refrain from making a new goal. In fact, she already has.

“I have been in the Elks ever since I was kid, like I said, and those mountains have held such an appeal to me,” Henderson said. “I grew up as a cowgirl, you know, I was riding horses my whole life, so we rode up there, I ran cattle up there, I worked for the Volk Ranch and rode permit for many many years, so I’ve just spent a lot of time up there. Now I’m focusing on climbing those peaks.”

Henderson’s personal and work life work off each other as she learns more about different products and activities, particularly as she has gravitated toward peaks though her new store has a primary market with people going on the Grand Mesa. She has been stand up paddle boarding and tying flies throughout the summer, learning about what the area demands from an outdoor store.

For instance, Henderson quickly learned that next to no one wanted pre-tied flies. They weren’t selling. She adjusted accordingly. She has noted favorite brands and products, popular activities in the area and comfortable price ranges. She’s determined to provide quality gear for the terrain, and the town has seemed to realize it.

Henderson said that, while things were a bit slow in the beginning, she had great business over the summer as she fine tuned her inventory. Her broadest takeaway was that it was better to have a lot of less than it was to have a little of everything.

Fall and winter items will be on display soon. Until then, she’ll boost other people’s adventures and go have her own on the side.

North Fork PDs lay out rough plans for Back the Badge