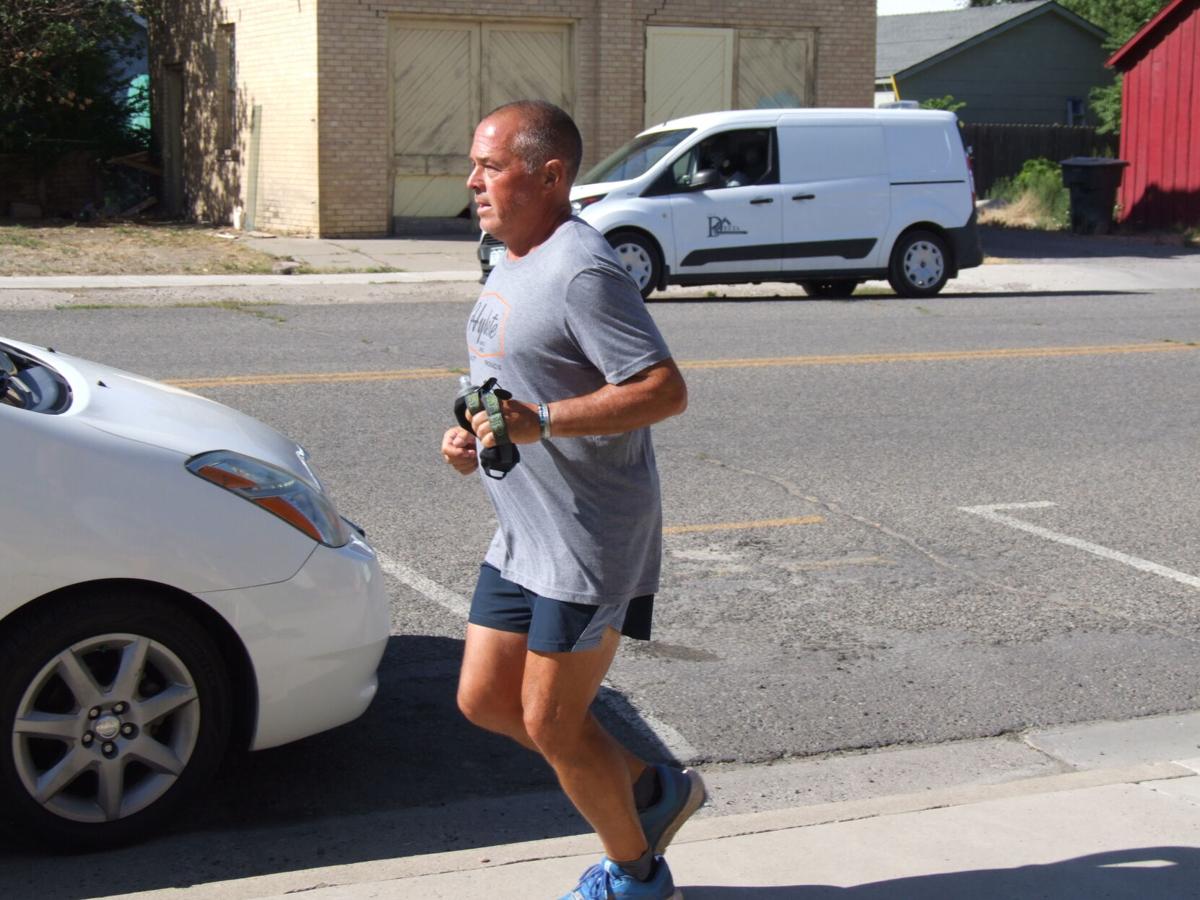 Appearing without fanfare on the side streets of Delta, Peter Halper reaches a pit stop in his coast-to-coast run to raise funds and awareness for childhood cancer. He started in California and will continue to New Jersey. 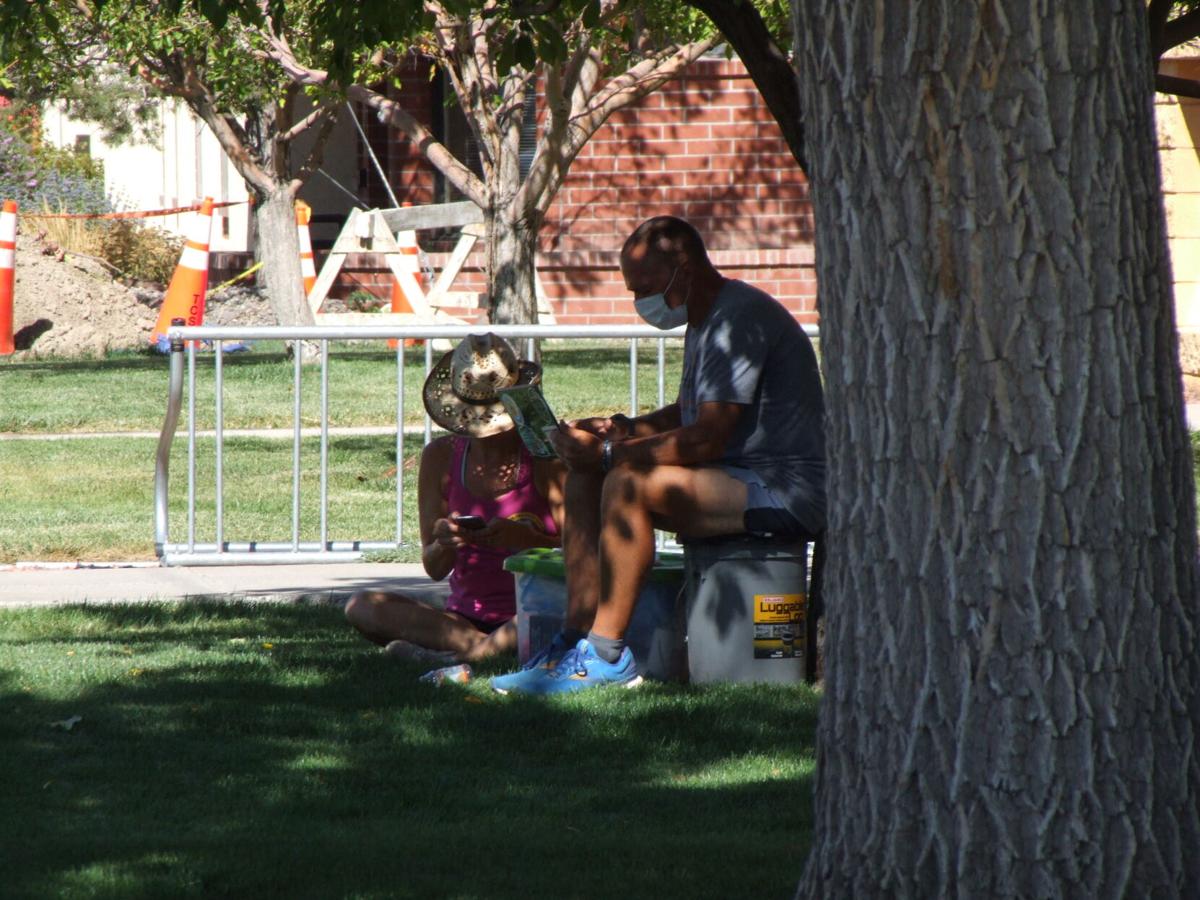 Stopping in the shade outside of the Delta Public Library, Peter Halper meets up with crew member Daveena, who carries supplies (such as the bucket he's sitting on and orange juice for a mid-morning energy boost) and helps him plan out the next steps in his route. 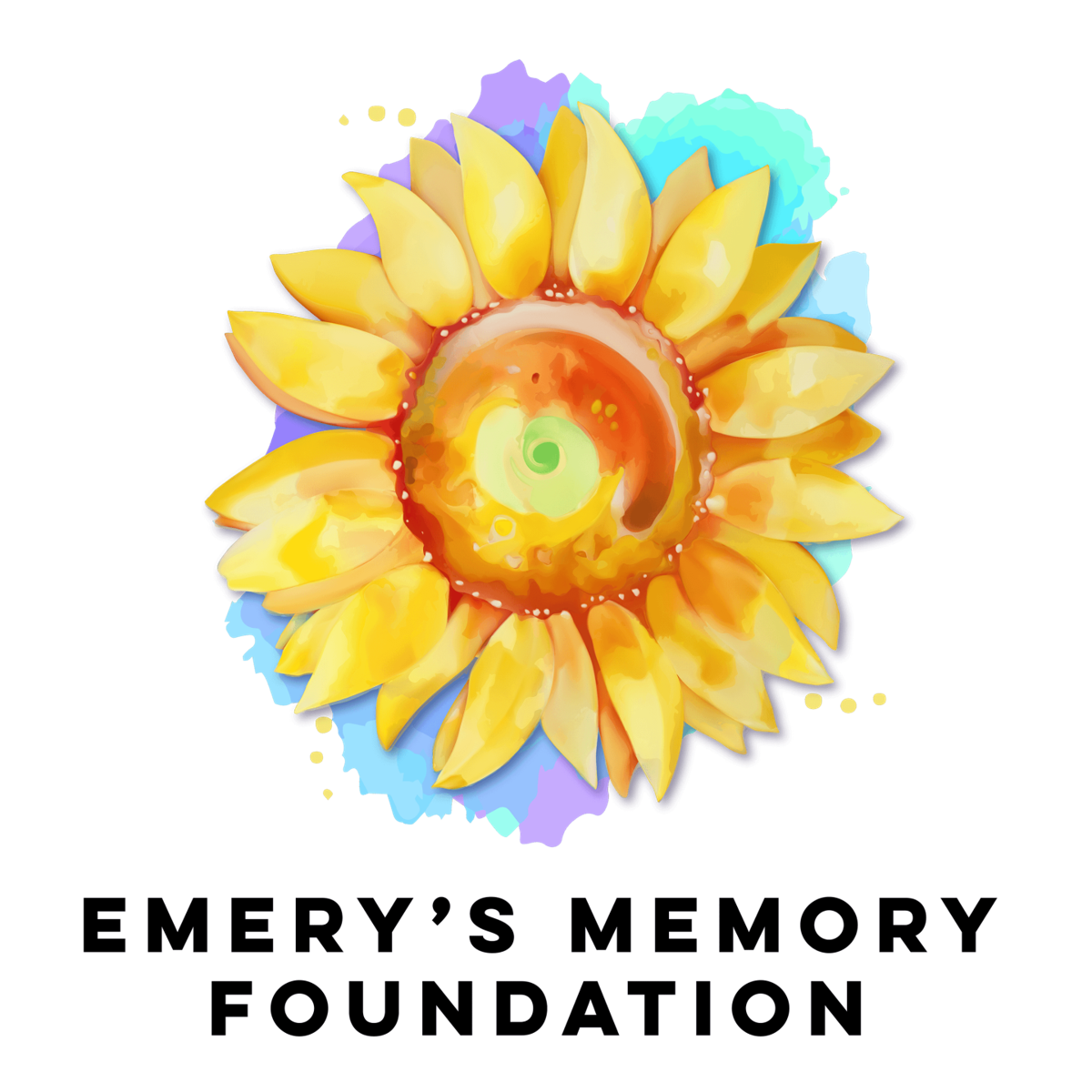 Emery's Memory Foundation hopes to raise awareness and funds for new, less toxic treatments for neuroblastoma and other childhood cancers. 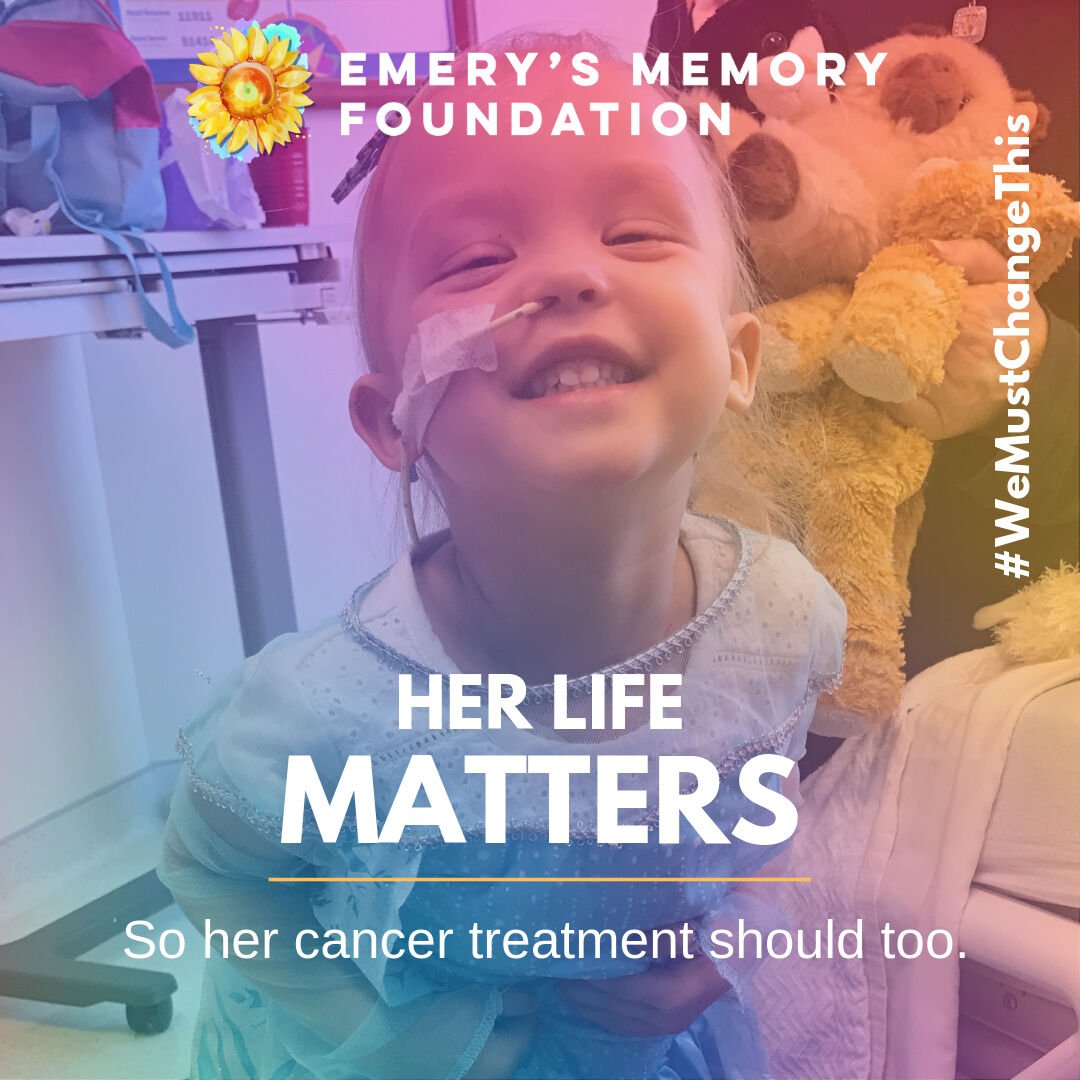 In memory of his great-niece Emery, who passed away from neuroblastoma at the age of three, Peter Halper is running from California to New Jersey to raise funds and awareness.

Appearing without fanfare on the side streets of Delta, Peter Halper reaches a pit stop in his coast-to-coast run to raise funds and awareness for childhood cancer. He started in California and will continue to New Jersey.

Stopping in the shade outside of the Delta Public Library, Peter Halper meets up with crew member Daveena, who carries supplies (such as the bucket he's sitting on and orange juice for a mid-morning energy boost) and helps him plan out the next steps in his route.

Emery's Memory Foundation hopes to raise awareness and funds for new, less toxic treatments for neuroblastoma and other childhood cancers.

In memory of his great-niece Emery, who passed away from neuroblastoma at the age of three, Peter Halper is running from California to New Jersey to raise funds and awareness.

Delta County sees many visitors from around the country, especially this time of the year. They drive or fly in to take advantage of abundant outdoor recreation opportunities or to visit family. Very few of them, however, can say they ran here all the way from California… and that they’re only halfway there.

Peter Halper, 52, of Fond Du Lac, Wisconsin did just that, but his purpose in passing through the area goes further than just seeing the sights. His arrival in Delta is a pit stop in a journey called Emery’s Thunder Run, which began on July 6 and goes from Dana Point, California to Avalon, New Jersey. The Thunder Run is the equivalent of 114 marathons, and is in honor of Halper’s great niece Emery Smith, who passed away at age three from a type of childhood cancer known as neuroblastoma.

On Wednesday morning, Halper rounded a corner in Delta to arrive at a checkpoint outside of the Delta Public Library. Without fanfare or distinction, wearing running shorts and already-worn-out blue tennis shoes, he could have easily been mistaken for a regular jogger taking a spin around town. But being seen isn’t the goal of the journey, Halper said — it’s letting children and their families who have been affected by cancer know they are seen.

“I will get to the end, but the impact is already happening,” Halper said. “There are numerous moms and dads who are very happy that they’ve just been seen. This is a way of saying, ‘I see you,’ and the parents are encouraged by the fact that people are willing to do something. That’s a success right there, before we even get to the coast.”

Because the run was rescheduled from its original dates due to the pandemic, Halper has been running through the country’s desert climates in the high heat of summer: he said that even while running at night, the soles of his shoes would melt after just days of use.

While the running itself is a solo mission (Halper uses an app to make sure he “hits every point on the route with his feet”), the journey also sees the help of crew members. Each of the 19 segments of the run has a crew that helps carry supplies, set up camp and communicate with the foundation and the communities. All the crew members, traveling hundreds of miles, are volunteers, in addition to people running fundraisers and other events along the route.

“One of the most inspiring things to me is not the run itself, but the number of people that have already jumped in and want to help. The crews alone, each segment is crewed by somebody and those are people that are volunteering their time, they pay their own way to get out here, they pay their own way to get back, they don’t get any money from the foundation, and they’re giving up a week’s vacation,” Halper said. “The fact that people are willing to get involved and sacrifice deeply on behalf of another, I personally find that inspiring.”

To honor both Emery and countless other children affected by childhood cancer, Halper runs in honor or memory of a child each day of the run. He includes a photo of a child at the beginning of each day and speaks about them.

“One of the things that we do every day is honor or remember one of the children,” Halper said. “Every day, when it comes to honoring a child that’s still living, in terms of our fundraising goal, I can’t think of a better way to honor the living than to find a cure someday. It’s one thing to say ‘I care about you,’ but it’s another thing to offer a tangible fix to what’s afflicting them.”

The primary fundraising purpose of the run is for lower-toxicity treatments for children with neuroblastoma. All childhood cancers combined receive only four percent of government funding for cancer research, resulting in limited and often outdated options for children (including using adult treatments). 14 children are diagnosed with neuroblastoma each day, and even those who survive are often left with lifelong complications as a result of the harshness of currently available treatments.

Teaming up with Emery’s Memory Foundation and Beat Nb, Halper hopes to raise money for a treatment known as difluoromethylornithine, or DFMO, which has far fewer damaging side effects and a higher success rate than other current treatments. Halper hopes to help make the treatment more accessible for neuroblastoma patients while it awaits FDA approval.

According to Emery’s Memory Foundation, with DFMO “after two years on one study, overall survival after relapse was 97%. At four years, it was 96%. This is striking compared to today’s survival rates of less than 10% after relapse, with current treatment protocols.”

Halper hopes to raise $200,000 on his run, $150,000 of which will go toward childhood cancer research and the remaining $50,000 of it going directly to families with a child battling neuroblastoma.

Halper said one of the best ways to support the cause is to share it. Throughout the run, he has seen the way that the story can make its way through connections and reach someone who has a direct link to a child with neuroblastoma, bringing communities together to help.

“If somebody reads this and they can share it… Hopefully by sharing, for somebody in the community, it will touch their heart in some way,” Halper said. “Sharing is a big deal, just writing about it and talking about it.”

The route passing through Delta is part of Segment 6 of the run, which is in memory of Kennady Rose (Kenna) Chamberlain and goes from Naturita to Glenwood Springs. After running through Delta, Halper’s route took him through Hotchkiss and Paonia.

His run will then go through the rest of Colorado, with the journey projected to conclude in New Jersey on Nov. 14. To find out more about Emery’s Memory Foundation or to support the cause, visit emerysmemoryfoundation.com/thunderrun or get updates on the run at the Emery’s Thunder Run social media.

“I would really like somebody that has the heart to jump in with us and help us in any way that they feel that will help, to not turn away,” Halper said. “I understand that not everybody can take on every cause there is, but if you feel like you want to do something, then by all means, please jump in and do something with us.”

Sheriff’s Office outlines priorities for Back the Badge funds, should it pass

The North Fork Valley gets its own brand logo