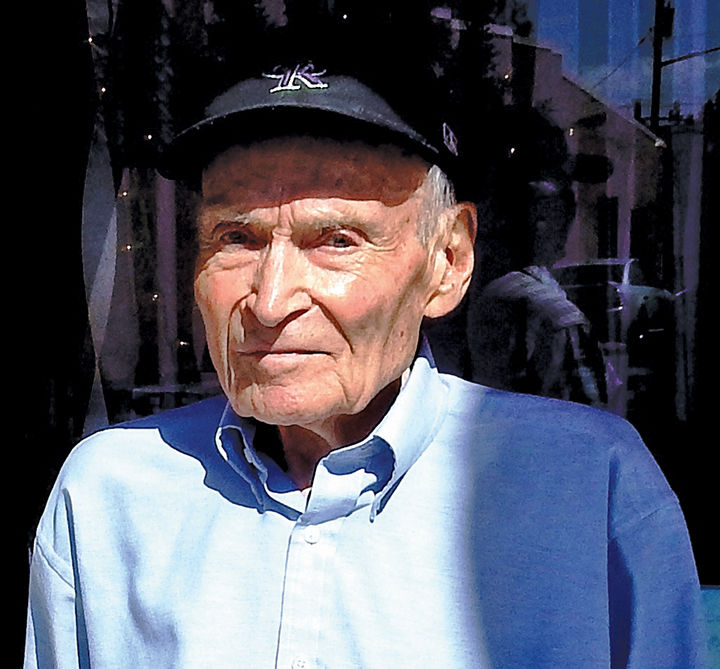 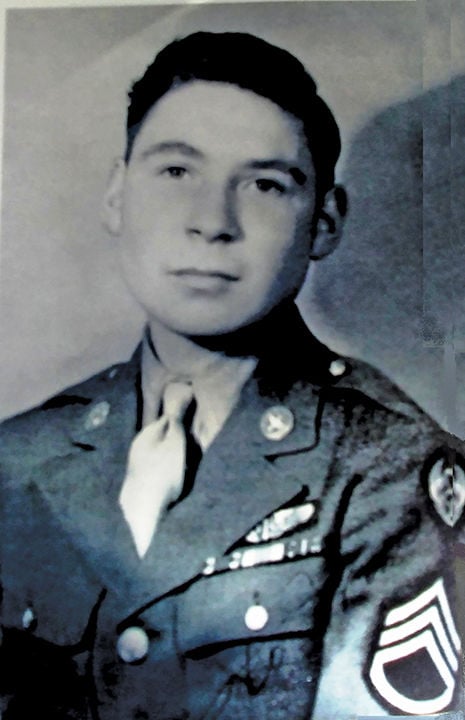 At the tender age of 19, Art Lindsey was already flying missions as a gunner on a heavy bomber. He attained the rank of staff sergeant and was later discharged as a first lieutenant. 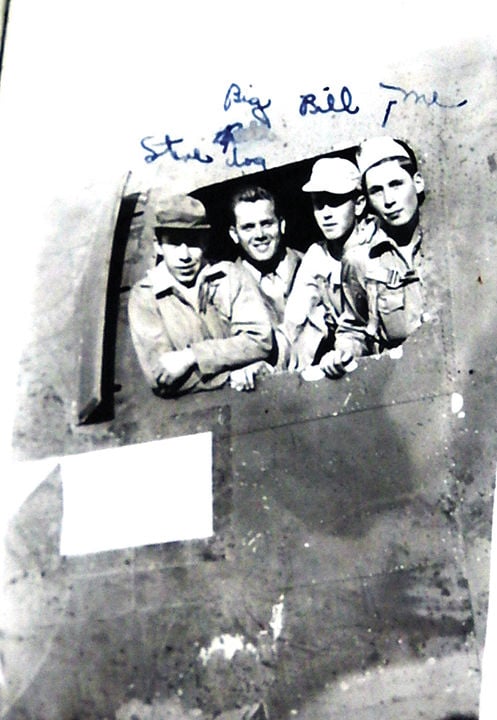 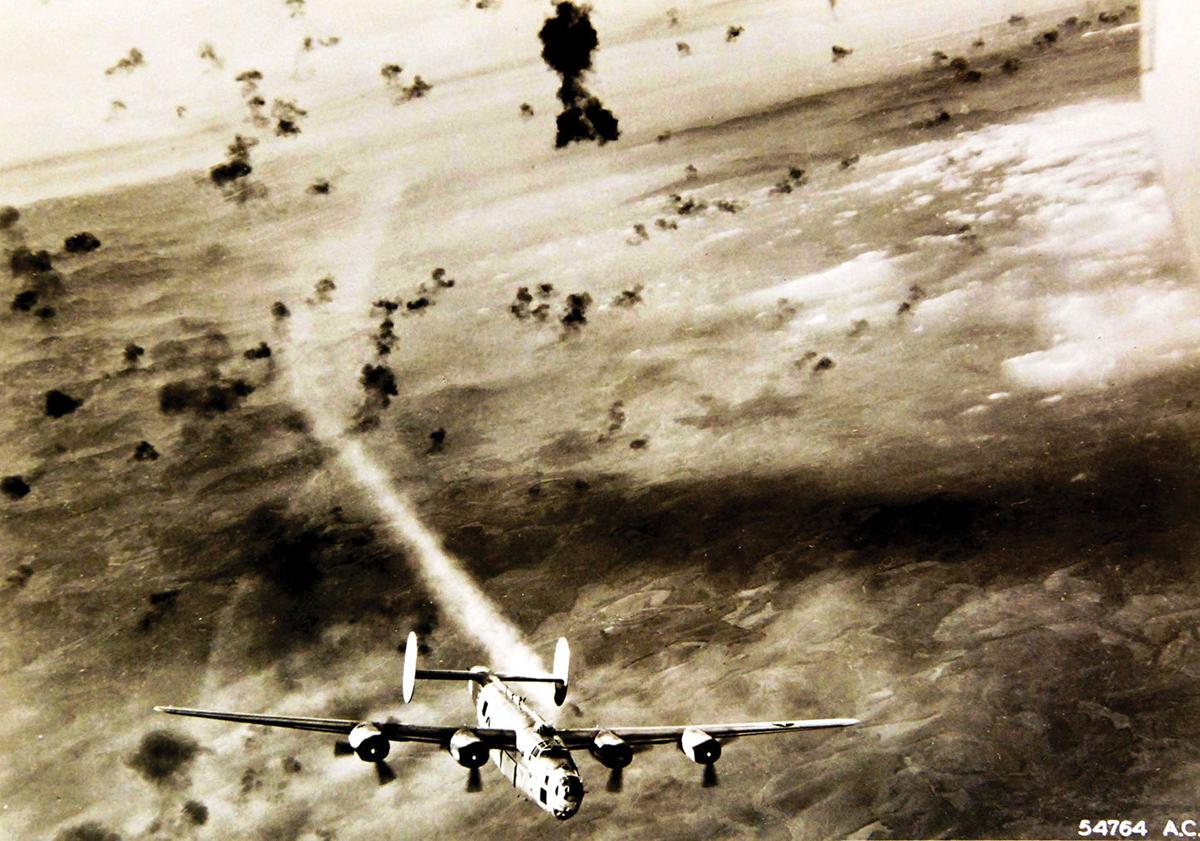 B-24 Liberator heavy bombers had to maneuver through broad bursts of anti-aircraft fire, like the flak shown in this WWII Army Air Corps photo.

At the tender age of 19, Art Lindsey was already flying missions as a gunner on a heavy bomber. He attained the rank of staff sergeant and was later discharged as a first lieutenant.

B-24 Liberator heavy bombers had to maneuver through broad bursts of anti-aircraft fire, like the flak shown in this WWII Army Air Corps photo.

Cedaredge’s Art Lindsey is a gentleman. Greeting visitors with a firm handshake, the 94-year-old radiates Western Colorado values, and it’s easy to understand that his long life has been distinguished by a history of business success and a legacy of military service. Recently the alert and amiable World War II veteran spent a sunny winter’s afternoon reminiscing about his past.

Art was born in Oklahoma and was not yet 2 years old when his family moved to Johnson, Nebraska, in 1926. The family was dirt poor, but there was always a garden and livestock on their small farm and he and his sister, Patricia Ann, grew up in a healthy environment. His mother, Lydia, made certain that the children attended school and church, and Art recalled that a good Christian background has always played an important role in his life.

Graduating from high school before age 18, he worked briefly in a Hastings, Nebraska, defense plant before being drafted into military service in 1943. At first he seemed destined for the Navy, but when the naval quota was filled, he landed right where he wanted to be: in the U.S. Army Air Corps.

A family tragedy and a debt paid in full

As Art boarded the train bound for the induction center at Ft Leavenworth, Kansas, he promised his mother he’d come home after the war and become a teacher and coach — ideas inspired by Grady Ashton, his high school basketball coach.

Within days, tragedy struck when his mother and sister were killed in an automobile accident. Art was granted an emergency furlough, and he hurried back home. There were no funds for funerals so young Art promised to pay the mortuary as soon as he was able — which he did by cashing his government bonds to pay part of the expenses and eventually settling the full debt two years later.

A Nebraska boy joins the war

Still grieving, Art completed his training and was assigned to a bomber crew at March Field, California. Soon his crew was ordered to fly a brand new aircraft across America and then over the Atlantic to a base in England. That journey took him from San Francisco to Arizona, then on to Tennessee, New York state and Goose Bay, Labrador, where the weather kept them grounded for a week.

Arriving in England, the young 19-year-old was soon making daylight bombing runs over Nazi Germany. Between August 1944 and February 1945, he completed 25 missions serving as a gunner aboard a B-24 Liberator aircraft. His outfit was the 8th Air Force, 466th Bomb Group-787th Squadron. His group was awarded a Presidential Citation and he received the Air Medal with three Oak Leaf Clusters added to that honor along with four Battle Stars.

A 1944 newspaper article described the actions which earned Art his Air Medal. On a bombing run over Germany, his B-24 encountered heavy anti-aircraft fire. That day Art — who usually served as tail gunner — was manning the Liberator’s top turret when the airplane was engulfed in a hail of flak.

The term ‘flak’ is an English abbreviation for a 19-letter German word meaning anti-aircraft fire. In the air, exploding anti-aircraft rounds create ominous black clouds as fused explosives spray metal shrapnel in all directions. That day in 1944, over one hundred fragments of flak penetrated the B-24 and two of Art’s fellow gunners were injured. He administered first aid, took over one of the gunner positions in the waist of the aircraft, and then — because the flak had disabled the bomb release cables — he climbed down into the open bomb bay and made his way along a narrow catwalk while wearing a bulky parachute. Reaching each cluster of bombs, he used a screwdriver to release all the loads manually and gravity did the rest. His efforts were laudable although the 1944 article exaggerated when it claimed that he tossed bombs at the Germans.

When the Liberator landed, the crew counted 113 holes in the heavy bomber’s aluminum skin. Art remembers the incident as the most frightening that he experienced as a young airman.

“The flak bursts came in ragged rows and you’d wonder where the next one would hit,” he said. “And then when my buddies got hit, and you look at them all a bloody mess, those were the scariest times.”

One of his comrades was hit in the back that day, and another lost an eye, but both lived. Miraculously, after 25 missions over enemy territory, no one on Art’s crew was killed.

Count noses in any vintage WWII photo picturing a B-24 crew and you’ll always come up with ten. According to Art, a Liberator crew consisted of four officers (pilot, co-pilot, navigator and bombardier) and six enlisted men (radio man, engineer, and four gunners). Art typically manned the 50-caliber Browning machine gun in the tail, but he sometimes took up other positions.

Art thought of his crew as a family then — and he still does.

When the crew wasn’t flying together, they might get a brief break with a pass into town, but most of the time everyone was training. A typical Hollywood war movie will feature non-stop action, but between missions, Art and his fellow gunners kept busy with practice drills. Serving as a gunner on a heavy bomber was all about learning to lead a moving target. In particular, gunners had to account for the pursuit curve of an enemy fighter pilot who tended to attack from the rear of the bomber.

To practice the knack of leading, gunners went to a trap-shooting range and fired twenty-five rounds every week. And to get acclimated to firing while in motion, Art and other gunners were placed in the back of pickup trucks and driven around a challenging course.

Art recalled that a typical bombing mission began with breakfast at 2 a.m. followed by a briefing and take-off at daybreak — weather permitting. Stormy days meant aircraft were unable to fly and sometimes the delays stretched into weeks.

One of the more memorable dawns which Art recalls was the day the weather broke near the end of The Battle of the Bulge which allowed the launching of 2,000 aircraft — a massive flying force of fighters and bombers including his own B-24. Once aloft, each heavy bomber took its place in formation. Each Liberator squadron had unique tail markings and pilots used these markings to flock together.

“It was crowded up there,” he said, “but every plane had a certain spot where they were supposed to be.”

Art’s 25 missions and his meritorious citations gave him 76 points which led to his discharge on Oct. 17, 1945. He had attained the rank of staff sergeant and, after serving in the reserves, he was ultimately discharged with the rank of first lieutenant.

Fulfilling the promise he’d made to his mother in 1943, he enrolled at Nebraska’s Peru State College in January 1946 to seek his teaching degree. There he met and married Patsy Ruth Yearout not long after the two met at a dance during his freshman year. He graduated in 1949 and worked as a teacher and basketball coach in Johnson, Nebraska.

During the summers he attended Colorado State College in Greeley (now the University of Northern Colorado) where he earned a masters degree in school administration. Eventually he served three years as Superintendent of Schools in Johnson.

A roommate and a new career

While working on his graduate degree in Greeley, Art roomed with Earl C. Smith who was working as a traveling sales representative for the Macklanburg-Duncan Company, a national firm specializing in building supplies.

Smith eventually recommended his friend to the company and, after an interview in Oklahoma with L.A. Macklanburg himself, Art embarked on a new career in sales. After serving as a sales representative in Iowa and Illinois, he was transferred to Colorado. Working out of Denver on straight commission, he soon became the company’s top sales representative reaching — within ten years — a personal sales’ milestone of one-million dollars. A decorative silver bowl inscribed with the names of top salesmen was awarded to him so often that he finally retired the keepsake, which he proudly displays in his Cedaredge home.

Big John was not so big at the time

As a traveling salesman for Macklanburg, Art was on the road visiting lumberyards throughout Colorado. In 1957 he called on the Cedaredge Lumber Company. He liked the town so well that he purchased a house and eventually returned in 1968 to purchase the hardware store and lumberyard. In honor of his son, John — who was nine at the time — he renamed the Cedaredge business ‘Big John’s Lumber.’ Later the business expanded to open Big John’s Building and Home Center in Glenwood Springs which son John currently owns and operates. In 1968, the Cedaredge store employed three people and one part-timer. Art owned Big John’s for 42 years before selling it. The business continues to prosper.

In the hallway of his Cedaredge home, Art displays a map of the world with a pin marking every place he’s been. There are more than 80 pins designating spots all over the globe.

“Of all the places I’ve visited, the reason I picked Cedaredge,” he said, “is for the people and the community.”

In a recent recollection of his life history, Art Lindsey summed it up this way:

“My mother taught me how to set goals, and I hope I have been able to pass this on to Pamela, my daughter and John, my son. As my life is ending, I feel good about where I started and where I am finishing. I have two wonderful children, Pamela Sue and John Lindsey and four grandchildren: Lindsey, Kailen, and Ryan Sather and McKenna Lindsey. I never want to forget my humble beginnings and the great life God has allowed me to have and share.”