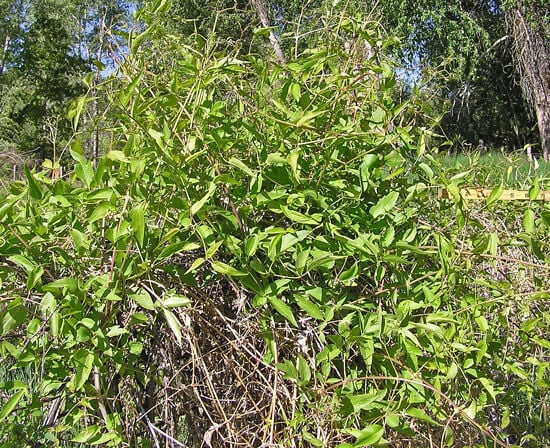 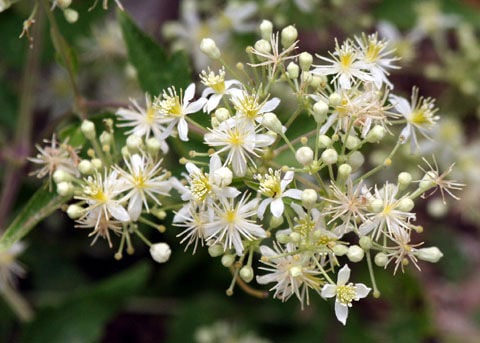 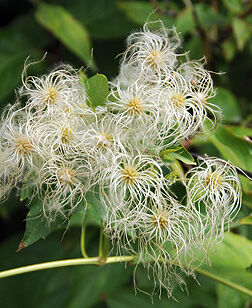 How many of you have grown or admired others efforts to grow clematis? A look at the accompanying photo of a cultivated clematis, jolly good, shows why this genus of vining plants is so popular. Large flowers with colors including white, purple, pink, red, blue and bi-color are most attractive. Most flowers are singles, but some are also doubles.

But my discussion today is not about our cultivated commercial varieties but rather a native vine that grows quite abundantly along the banks of Surface Creek. This vine’s scientific name is, clematis ligusticifolia. This member of the buttercup family goes by many common names including western white clematis, virgin’s bower clematis, pepper vine, hierba de chivo, old-man’s beard and yerba de chiva.

There are about 30 native species of clematis in North America. This one is widespread across the Western United States in stream-side thickets, wooded hillsides and coniferous forests. It is a strong, woody or semi-woody climber to 20 feet or more, frequently twining and climbing shrubs and trees until they are covered. From mid-to-late summer, western white clematis produces numerous small white flowers, but it is the great mound of leaves and the very eye-catching mass of yellow/white, seed-carrying plumes that really attract attention.

Western white clematis has opposite leaves that are pinnately compound with five to seven leaflets. Clusters of white flowers arise from the leaf axils, with male and female flowers on separate plants. Flowers lack petals but have four showy sepals. Female flowers have numerous sterile stamens. Fruit are silky, feathery achenes in clusters that are likened to an “old man’s beard” or a goat’s beard.

Clematis ligusticifolia was called “pepper vine” by early travelers and pioneers of the American Old West. They used it as a pepper substitute to spice up food since real black pepper was a costly and rarely obtainable spice. Like the rest of the genus clematis, it contains essential oils and compounds which can be extremely irritating to the skin and mucous membranes.

The seed floss has been used by natives as tinder for starting fires, as insulation in shoes, and as an absorbent in baby diapers; the stems to make carrying nets and bow strings; the roots to make a shampoo. An infusion or poultice of this plant was applied to sores, wounds, bruises, swellings, painful joints, and was also used to treat chest pain and backaches and to treat horses and other animals. Crushed roots were reportedly placed in the nostrils of tired horses to revive them. Native Americans also used very small amounts of clematis for migraine headaches and nervous disorders.

Western white clematis can be used in the landscape just as are ornamental varieties. It can be trained on a trellis or allowed to climb a tree. It is drought tolerant and may be useful for erosion control and hillside plantings. This native clematis attracts birds, hummingbirds and butterflies. Small birds and rodents often use the vine’s canopy for cover. Birds like to nest in the thick, tangled vines and the fluffy seeds heads seem to be a perfect material for lining nests. Flowers are pollinated by bees and other insects.

The next time you walk the Surface Creek Trail, keep your eye out for this vine. It blooms from June to September with “bearded” seed become evident from August through November.

Jim Leser retired to Cedaredge in 2007 after a career with Texas A&M University Extension in entomology. He is a member of the Cedaredge Tree Board and a Colorado Master Gardener.