Athletes from Cedaredge, Delta, Hotchkiss and Olathe line the street in Delta to demonstrate against the CHSAA and its denial of playing football in the fall. The Sept. 11 protest was one of many across the state of Colorado to challenge CHSAA's ruling. 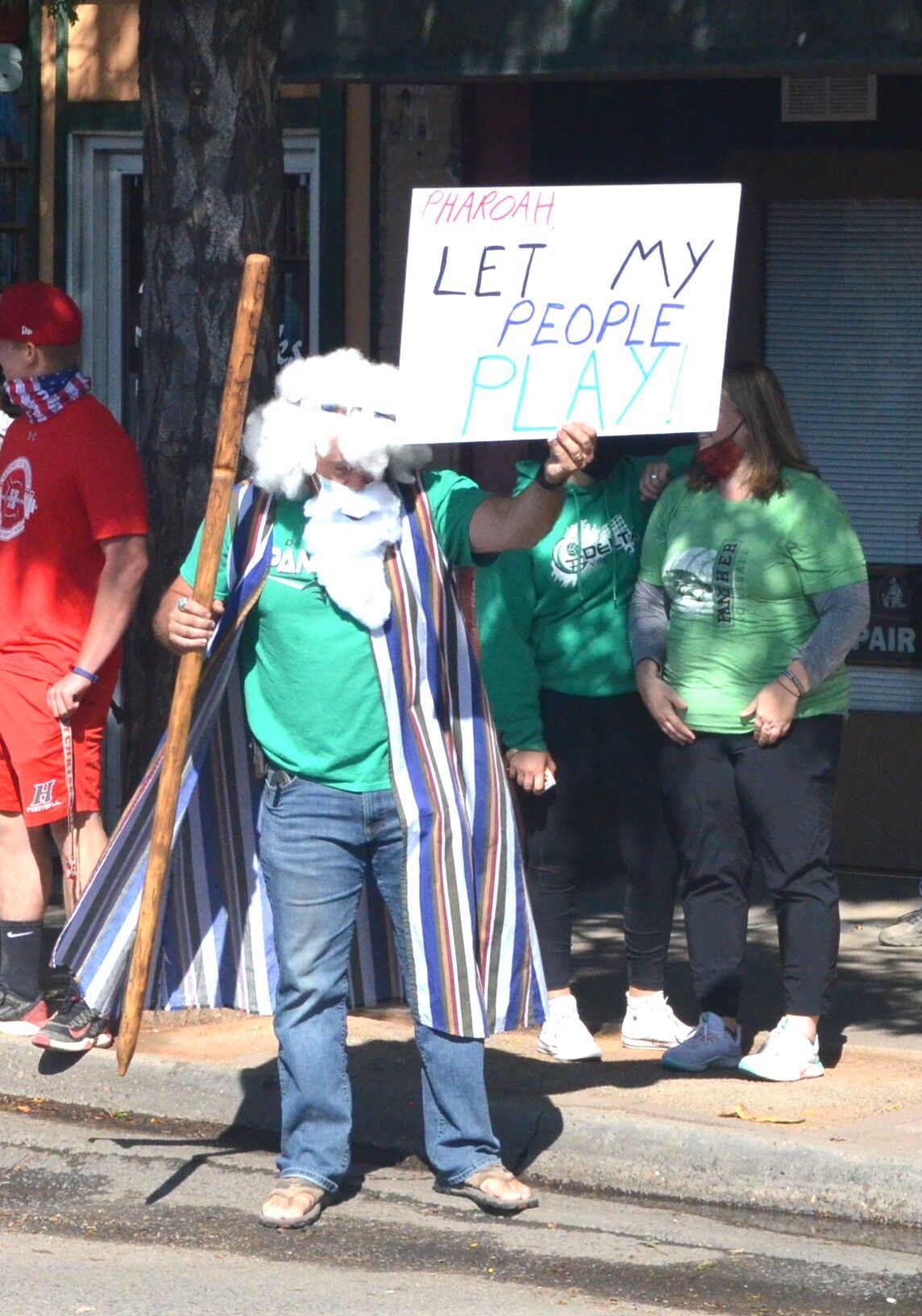 This supportive gentleman, named Jason, used a familiar but often affective ploy with his costume and sign in an effort to influence CHSAA's ruling of no football in the fall.

Athletes from Cedaredge, Delta, Hotchkiss and Olathe line the street in Delta to demonstrate against the CHSAA and its denial of playing football in the fall. The Sept. 11 protest was one of many across the state of Colorado to challenge CHSAA's ruling.

This supportive gentleman, named Jason, used a familiar but often affective ploy with his costume and sign in an effort to influence CHSAA's ruling of no football in the fall.

Athletes from four different high schools collaborated efforts to stage a protest against the most recent decision from the Colorado High School Activities Association to not allow fall football to be played beginning in October. Athletes, wearing their school football jerseys from Cedaredge, Delta, Hotchkiss and Olathe participated in the demonstration which was staged near CB’s Bar and Tavern in Delta.

After being informed about a decision earlier in the week that seemingly ended any more speculation about the possibility of a fall football season in Colorado, a message from the CHSAA stated talks were ongoing with the governor and the COVID-19 Response Team to possibly overturn a recent decision to not grant variances CHSAA commissioner Rhonda Blanford-Green had sought earlier in the week. The most recent information on the topic seems to indicate that the COVID-19 Response Team has now changed its position. Governor Polis gave the commissioner a verbal reassurance on that same day, that the variances that had been asked for would be expedited. No information from those governing bodies has been verified at this time and for now the original decision to not allow the variances stands.

The Board of Directors and CHSAA staff are working collaboratively to survey administrators from the entire membership to gather their input.

The message from athletes gathered for the demonstration was unanimous for the most part with Delta High School senior Nolan Bynum (DHS quarterback) saying what most were thinking in his interview with KREX and News 11 television stations when asked how disappointed he was to not be playing football this fall.

“It’s very disappointing for us because we’ve been on the same teams since we were 10 years old. It’s our last year for one last ride with the boys. Our emotions have been up and down. We feel like we’re missing out. There are 40 states that are playing football with 20 of them showing higher COVID-19 rates than us.”

Hotchkiss’ Coulson Hollembeak, a recent addition to the Hotchkiss High School football team, told the DCI, “We were told to wear masks and follow all the protocol. We’ve done all the governor has asked and now we want a chance to play.” Hollembeak feels the Bulldogs are in a ready state because when the team is not in school they are in the weight room and spending time on designated days to work on plays and their timing.