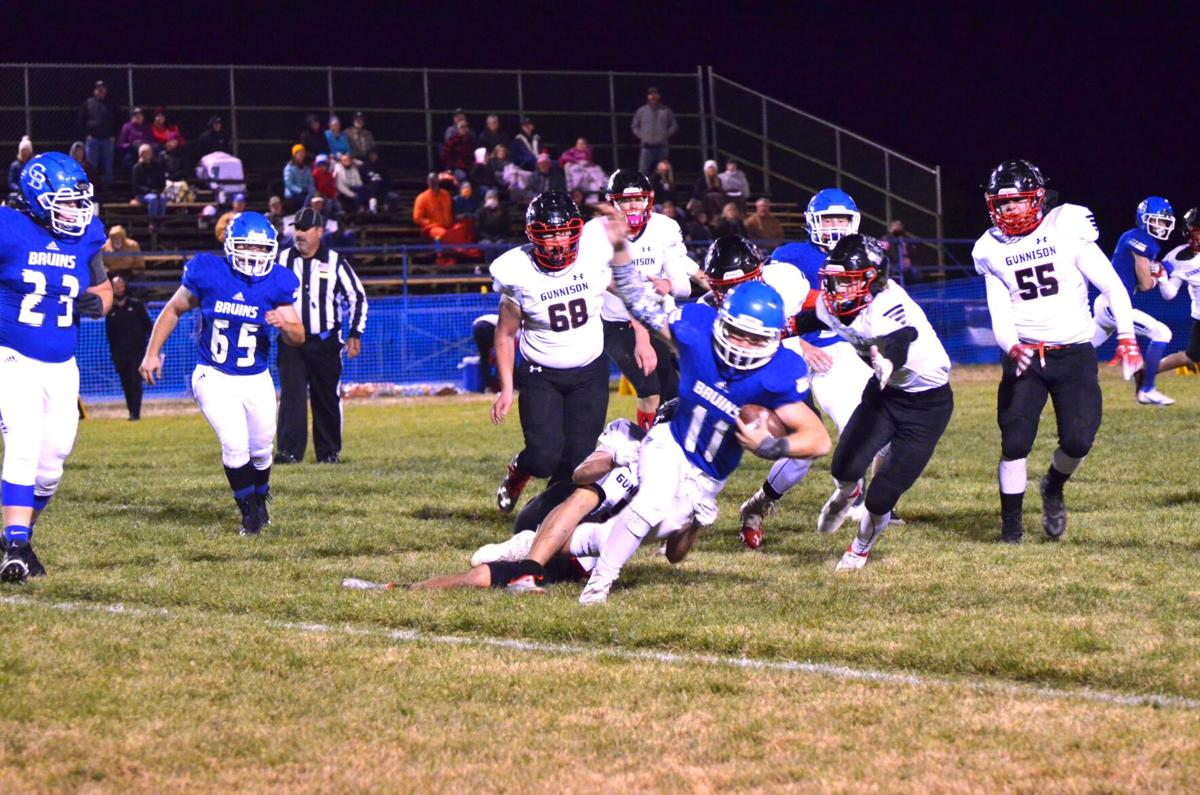 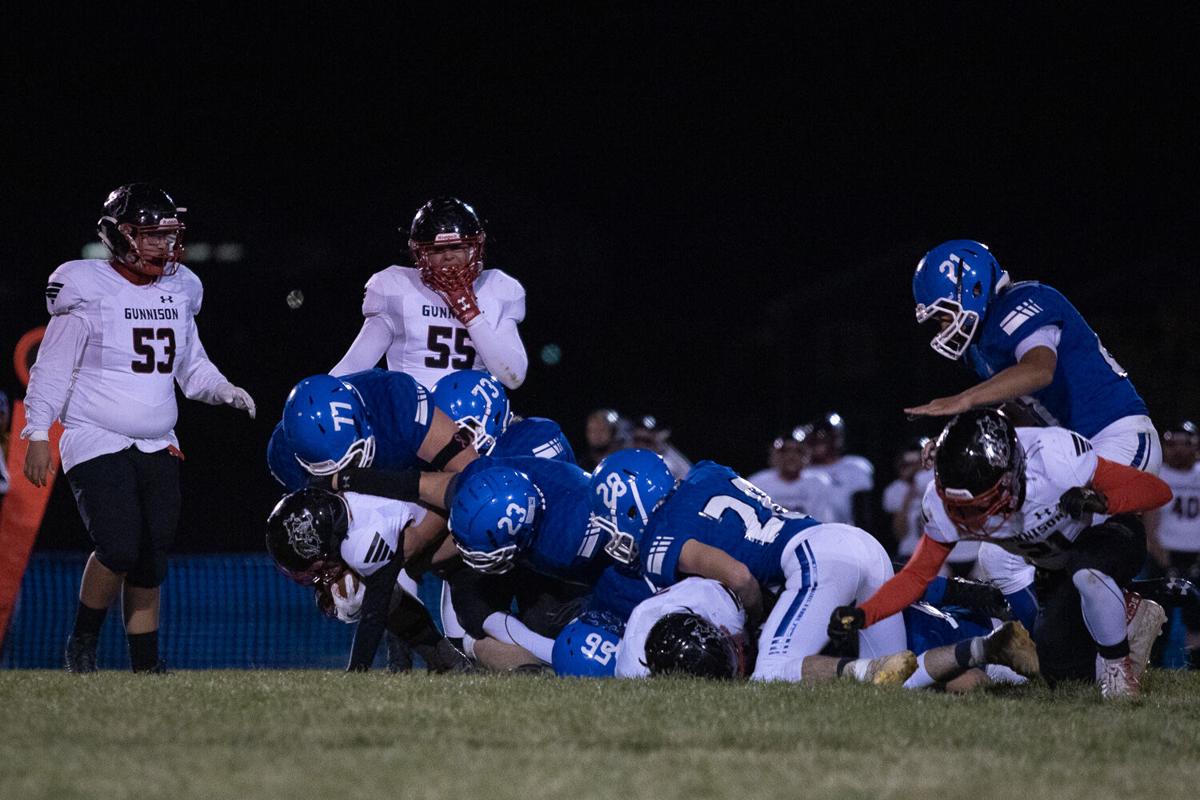 The Cedaredge High School defense was impressive at times against the visiting Gunnison Cowboys in a 20-7 loss last Friday (Oct. 23) night. Here, a host of Bruins make sure the Gunnison runner doesn't get another inch.

The Cedaredge High School defense was impressive at times against the visiting Gunnison Cowboys in a 20-7 loss last Friday (Oct. 23) night. Here, a host of Bruins make sure the Gunnison runner doesn't get another inch.

On paper the game was supposed to be a Cedaredge victory. The unknown factor is how well the other team is prepared for any game. The Gunnison Cowboys have played powerhouses Florence and Meeker in their two previous games, both one-sided losses (32-8 and 40-0), and entered last week’s game against the Bruins with an 0-2 and 0-1 record. Gunnison has been building a program for the past few seasons after dropping to a junior varsity schedule and returning to the varsity level just recently. There are plenty of senior athletes who have earned their dues in that time span and finally put together a complete game to score a 20-7 win in Cedaredge last Friday night.

Gunnison senior Nico Marchitelli was more than a worthy opponent for Cedaredge with the poised quarterback throwing for 158 yards in an 18 for 28 performance that included two touchdown passes in the win. Marchitelli also contributed heavily to the ground game with 33 yards rushing on 10 carries and one touchdown to keep Cedaredge’s defense guessing at times.

Cedaredge contributed heavily to its own demise with numerous miscues that cost it dearly. Case in point is the opening drive of the game where the Bruins took the opening kickoff and moved the ball to the 50-yard line in two plays, and a helmet-to-helmet penalty against Gunnison. A 5-yard loss on the third play set the ball back to the Bruins’ 45. From there things got worse. A snap over Cedaredge quarterback Jacob Brown’s head was recovered by Brown at the Bruins’ 28-yard line. On the next play, Brown found senior Alex Barron for a 20-yard pass play back to the 48 of Cedaredge to bring up a fourth down. Another errant snap zoomed over punter Colby Rupp’s head and the Cowboys began their first possession at Cedaredge’s 20-yard line. Four plays later, Marchitelli finished the 20-yard drive with a 1-yard plunge and six points. Junior Jose Sanchez booted the extra point to give Gunnison a 7-0 lead with 8:12 left in the first quarter.

A three and out for Cedaredge gave the ball back to the Cowboys at the Bruins’ 47. Marchitelli engineered a four-play drive that included two passes for 26 yards, the final one being a 14 yard completion for the touchdown with 35.4 seconds left in the first period. Gunnison missed the extra point try and was leading 13-0.

The Cowboys scored one more time in the second quarter and held a 20-0 lead at halftime.

At some point in the first half of play, Bruins’ quarterback Jacob Brown suffered a concussion and it wasn’t diagnosed until halftime in the locker room. Brown would miss the remainder of the game with junior Ty Walck taking over in the second half for the Bruins.

The Bruins averted a shutout with Walck tossing a touchdown pass to Alex Barron in the fourth quarter to make the final score 20-7.

The loss of Brown, and a lackluster performance, left Coach Craig Cerise shaking his head. “We try to tell our kids not to overlook anyone, but it happens anyway.”

Cedaredge had 79 yards of passing offense between Brown and Walck with Brown completing two of eight passes for 23 yards and Walck hitting two of 10 attempts for 56 yards and one touchdown.

The Bruins’ ground game was not as prolific as in the previous two games with Conner Brooks carrying the ball 14 times for 40 yards. Walck finished with three carries for 20 yards and senior Trey Geyer had 17 yards on seven carries. Cedaredge finished the game with 154 yards of total offense while the Cowboys had 195 total yards.

Senior Brody Wagner had 12 tackles to lead the defense for Cedaredge with teammates AJ Robidoux and Barron adding 11 and eight tackles respectively.