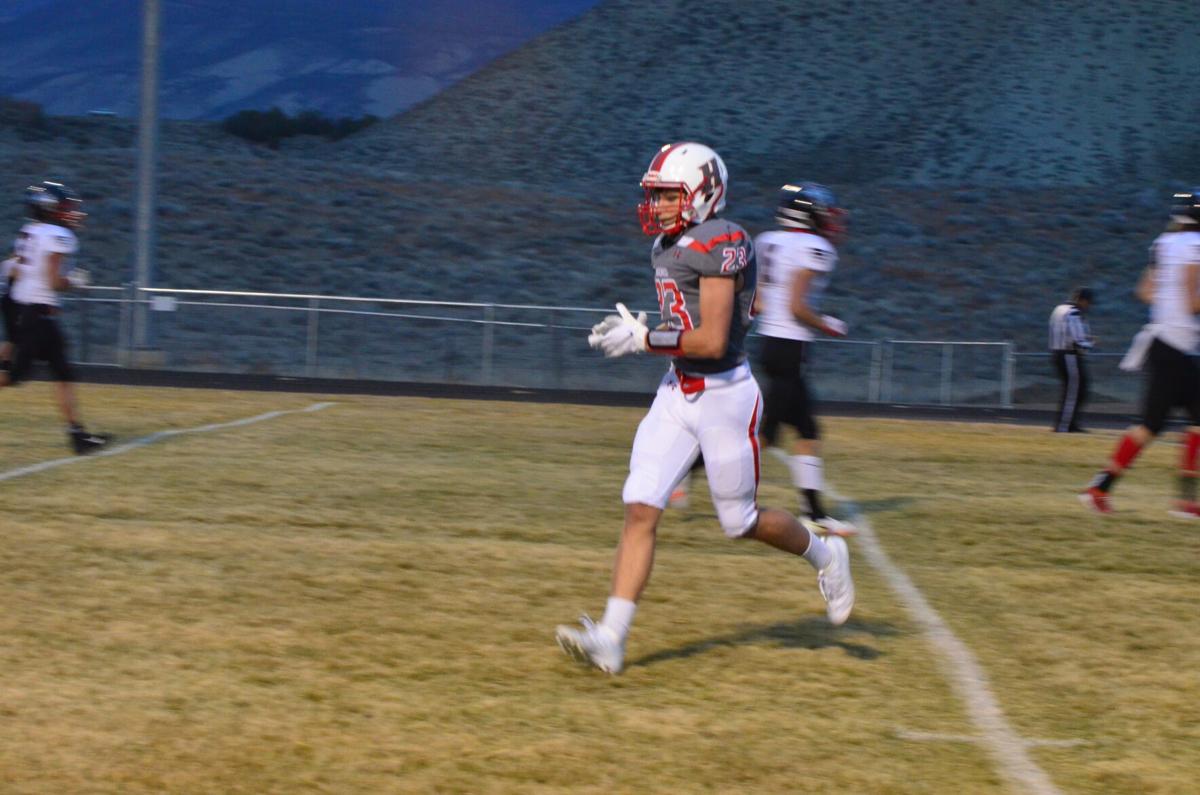 Hotchkiss High School junior Blaine Peebles heads to the sidelines after scoring on a 52-yard pass play from senior quarterback Yahir Chavez. Peebles scored twice on passing plays and ran for another touchdown in the Bulldogs' 49-7 win over Gunnison. 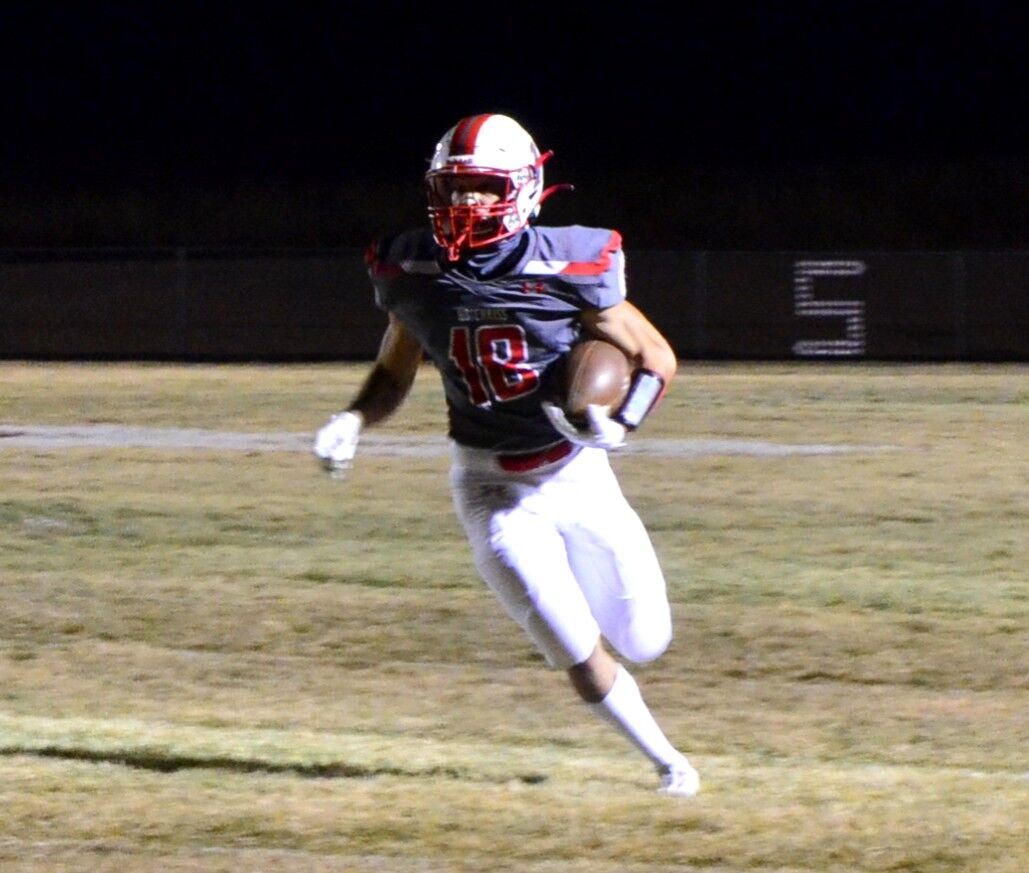 Hotchkiss High School senior Robert Cochran is shown all alone as he races for the end zone on a 21-yard sprint in the Bulldogs' 49-7 win over Gunnison. 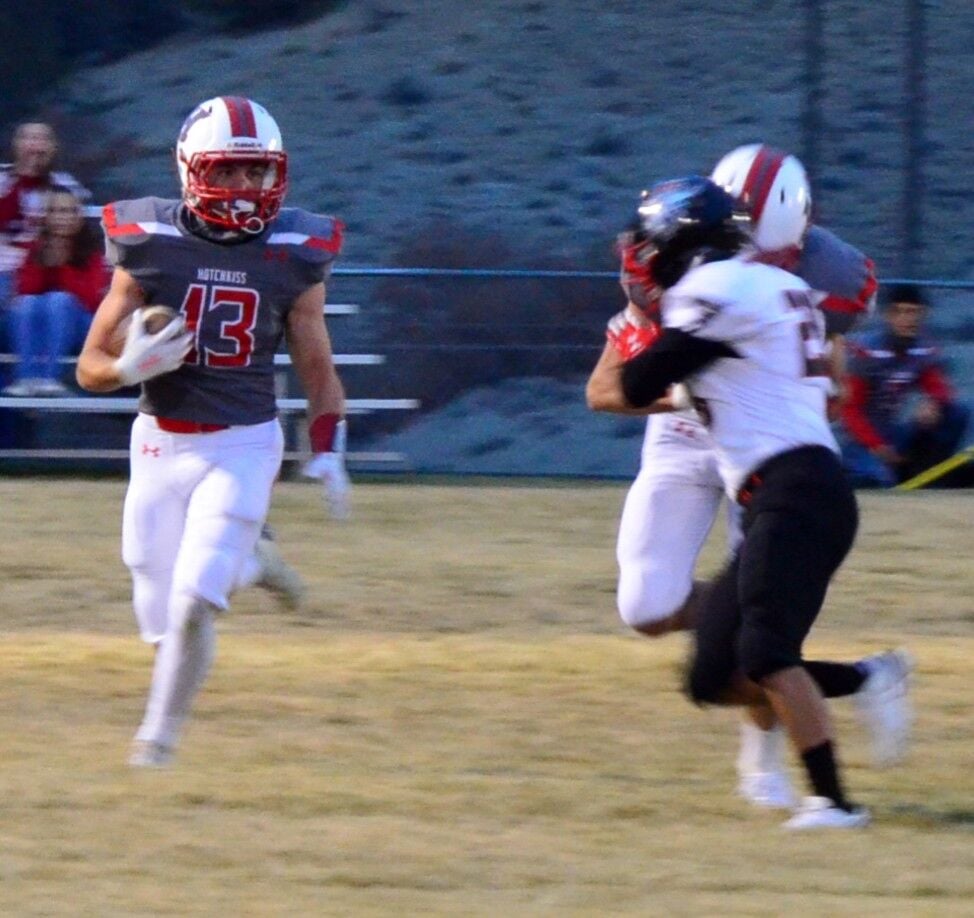 Hotchkiss High School junior running back, Mordecai White, breaks into the clear off the block of a fellow lineman in last Friday (Nov. 6) night's 49-7 win at home over Gunnison's Cowboys. 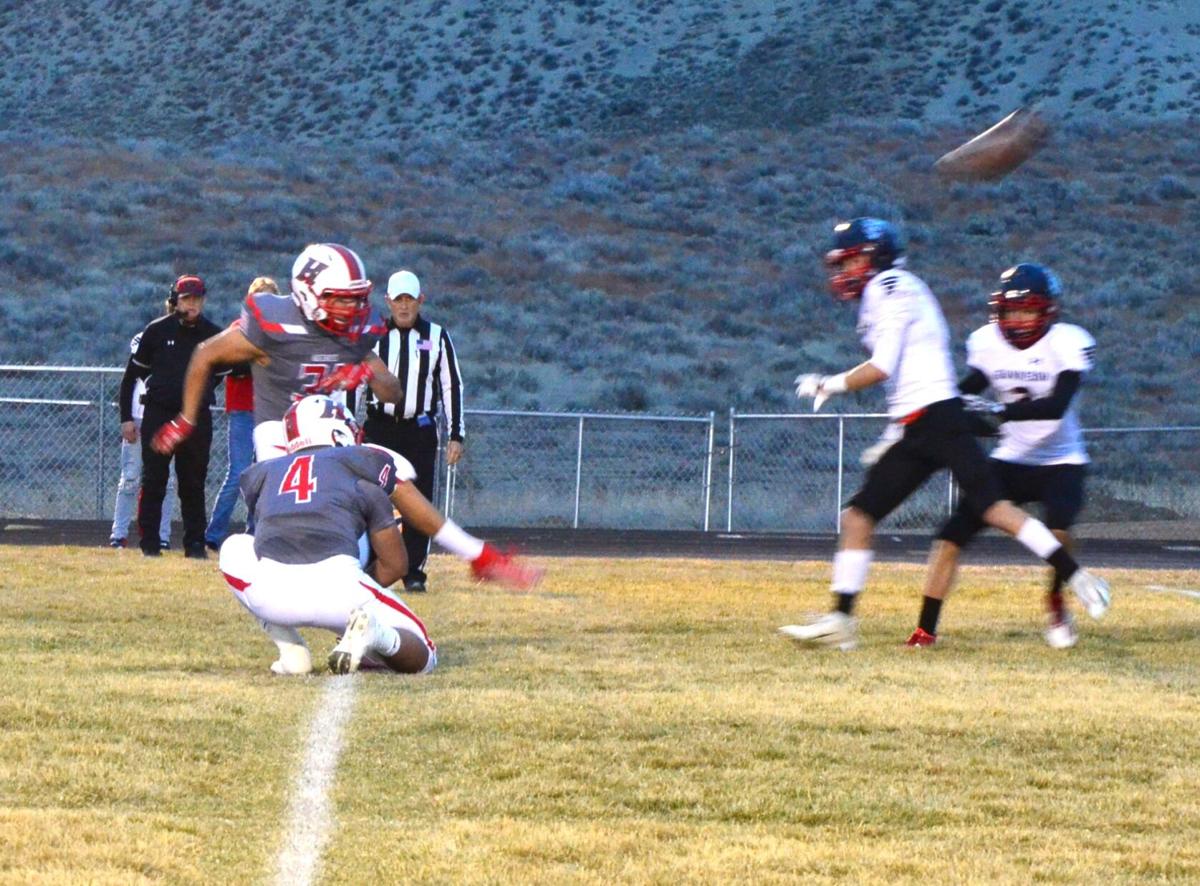 Hotchkiss High School junior Blaine Peebles heads to the sidelines after scoring on a 52-yard pass play from senior quarterback Yahir Chavez. Peebles scored twice on passing plays and ran for another touchdown in the Bulldogs' 49-7 win over Gunnison.

Hotchkiss High School senior Robert Cochran is shown all alone as he races for the end zone on a 21-yard sprint in the Bulldogs' 49-7 win over Gunnison.

Hotchkiss High School junior running back, Mordecai White, breaks into the clear off the block of a fellow lineman in last Friday (Nov. 6) night's 49-7 win at home over Gunnison's Cowboys.

It’s been a banner year for the Hotchkiss Bulldogs, and with just one game remaining on this year’s football schedule Hotchkiss will reign as the 2020 1A Western Slope League champion. The Bulldogs (5-0) have a conference game in Cedaredge against the 3-2 Bruins, which are ranked 15th in the RPI poll to begin the week. Even though Hotchkiss defeated Meeker earlier in the year, the Bulldogs are listed fifth in the RPI poll for 1A schools, and Meeker is sitting in second place with a 4-1 record.

Last week’s game against the visiting Gunnison Cowboys was a one-sided affair with Hotchkiss rolling to a 49-7 win. Gunnison, 2-3 overall and 2-2 in league play, is ranked 13th in the latest 1A RPI poll and is likely out of the picture in regards to post-season playoff pictures.

The first offensive series of the game against Gunnison belonged to the Bulldogs. It was a short series for Hotchkiss as senior quarterback Yahir Chavez found junior wide receiver Blaine Peebles all alone along the right sideline for a 52-yard touchdown pass with the scoreboard clock showing 11:05 remaining in the period. The Bulldogs opened the drive with a 4-yard run from junior running back Mordecai White to Hotchkiss’ 48. An extra point kick from senior Saul Cortez had the Bulldogs off and running with a 7-0 lead.

Hotchkiss clamped a smothering defense on the Cowboys’ offense in their first possession to force a punt from Gunnison’s Nico Marchitelli.

Hotchkiss took over at its own 32-yard line for its next series and had trouble getting the offense going in the right direction with three straight holding penalties that had the Bulldogs starting from the 10. A Peebles punt for 56 yards got the Bulldogs out of the hole with Gunnison starting its next possession at the Cowboys’ 20. Gunnison’s offense sputtered, with the help of penalties that eventually forced the Cowboys to kick the ball back to Hotchkiss.

This time Hotchkiss was not to be denied with the Bulldogs starting on their own 45-yard line and marching 55 yards on five plays culminating with a Chavez 2-yard plunge for the score with 1:27 remaining in the opening period. Cortez’s PAT kick had the Bulldogs leading 14-0 heading to the second quarter.

The Bulldogs added a third touchdown on their first possession of the second quarter when senior Robert Cochran to a handoff on a misdirection play that provided clear sailing to the end zone from 21 yards out. Cortez’s kick gave Hotchkiss a 21-0 lead with 8:23 left before halftime.

Hotchkiss’ defense continued its dominance over Gunnison’s offense and the Bulldogs scored their fourth touchdown almost three minutes later on a Peebles 75-yard run with 5:18 left in the opening half of play with Hotchkiss leading 28-0.

A seven-play drive covering 34 yards delivered Hotchkiss’ next score. A Chavez to Peebles pass was good from nine yards out, and the Bulldogs were on top 34-0 with 8:05 left in the third quarter.

The Bulldogs went on to score a safety (Drayden Taylor) and one more touchdown (White) on their way to the 49-7 victory.

Gunnison’s biggest offensive numbers came through the air with the Cowboys gaining 158 yards on the arm of Marchitelli who finished the game with 16 of 23 passing and one touchdown. The Cowboys’ running game produced just 20 yards on 16 carries to give Gunnison 178 total yards in the game. Hotchkiss had 107 yards in the passing game and 408 on the ground for 515 total yards.

Chavez completed six passes (all to Peebles) for 107 yards and two touchdowns. The Bulldogs had two players with more than 100 yards in the game with junior Drayden Taylor carrying the ball for 110 yards and White’s 103 yards on nine carries. Senior Traycer Hall contributed 76 yards to the 408 yards recorded on the ground with his four carries.

Five Hotchkiss players had 10 tackles each in the game for the Bulldogs, including seniors Micah Defield, Adam Smith, Hall and juniors Taylor and Coulson Hollembeak. Cochran finished with nine tackles with senior teammates Carter Neff and Christian Matus recording eight tackles each. The Bulldogs also recorded seven sacks in the game with Hollembeak’s three take downs leading the way.

Hotchkiss is scheduled to play Cedaredge (in Cedaredge) on Friday, Nov. 13 at 7 p.m. to end regular season play.

A Labor of Love: Lark Abel fashions a luminous tribute to a timeless poet