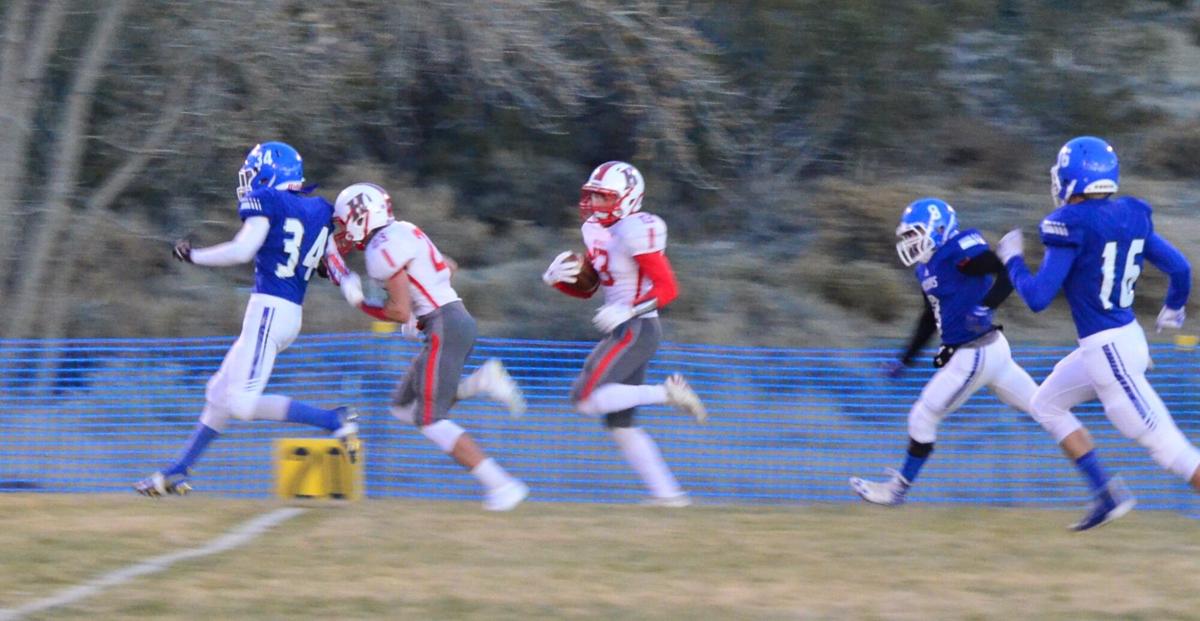 Hotchkiss High School junior Mordecai White (13) receives a block from teammate Blaine Peebles on his way to a 53-yard touchdown in the opening quarter of the Bulldogs' 49-7 win over Cedaredge. 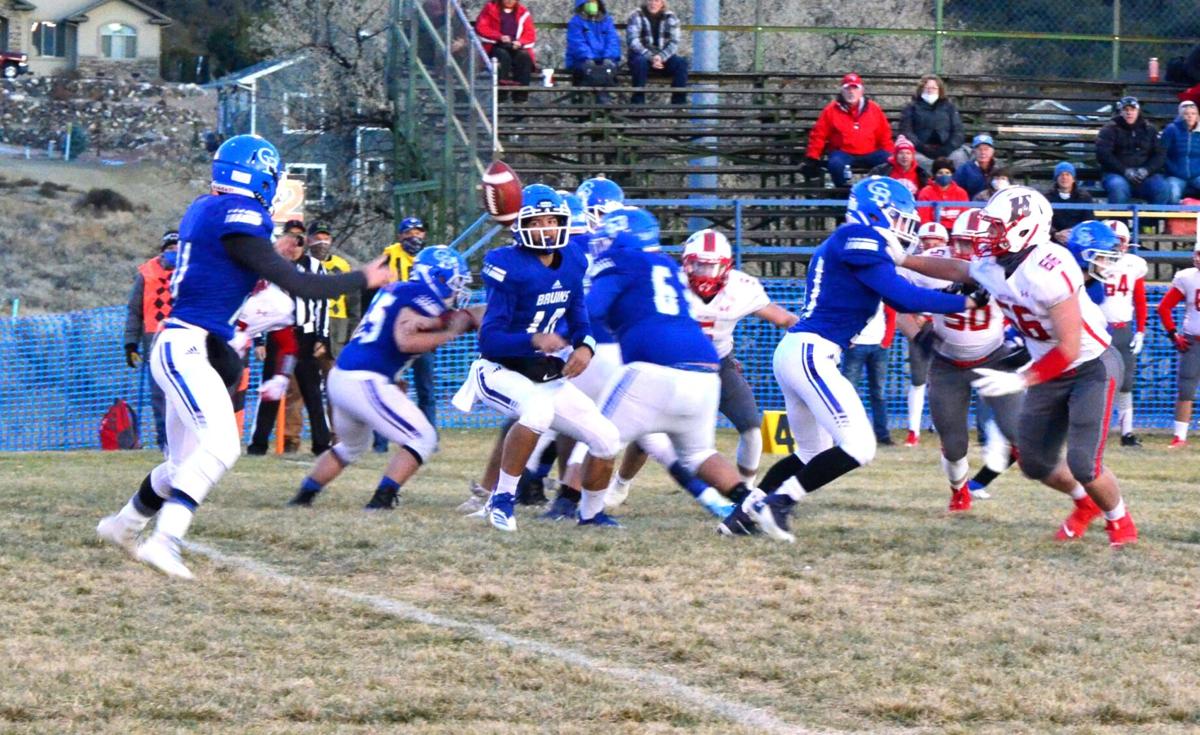 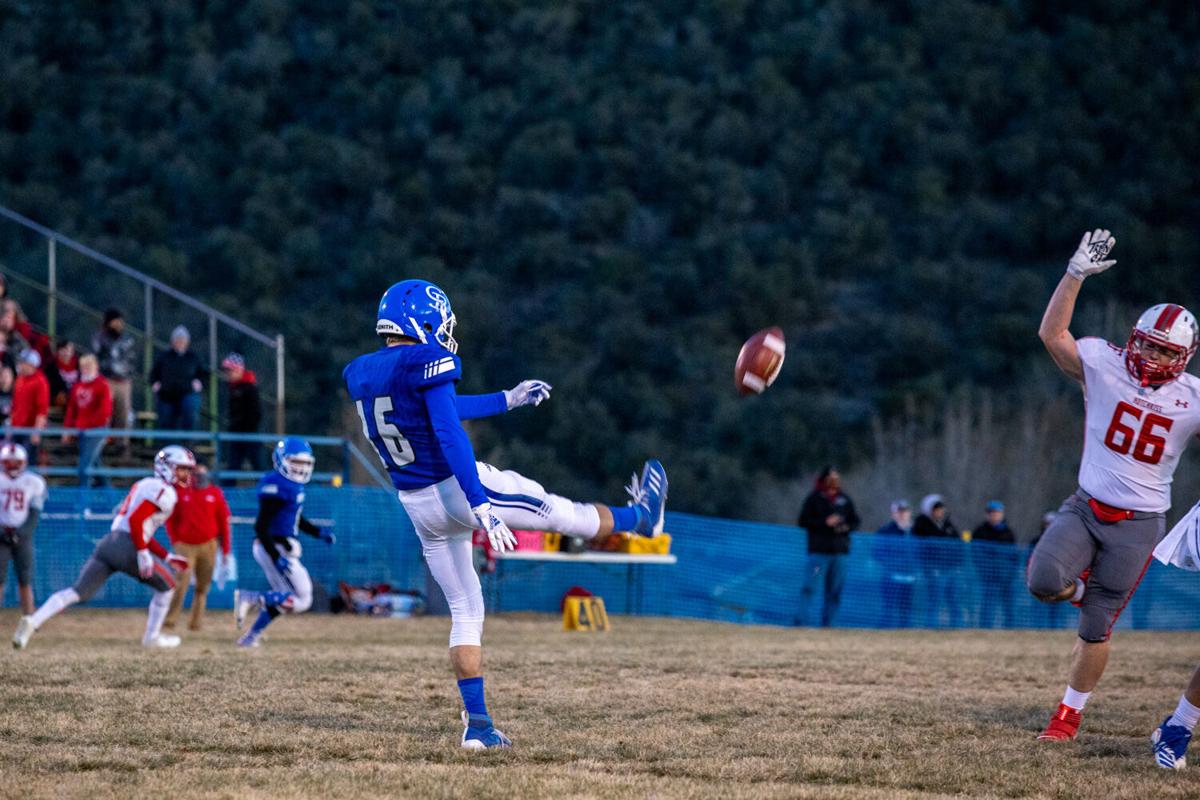 Cedaredge High School punter Colby Rupp (16) punts the ball away during first quarter action as Hotchkiss junior Coulson Hollembeak extends a hand in an attempt to block the punt. 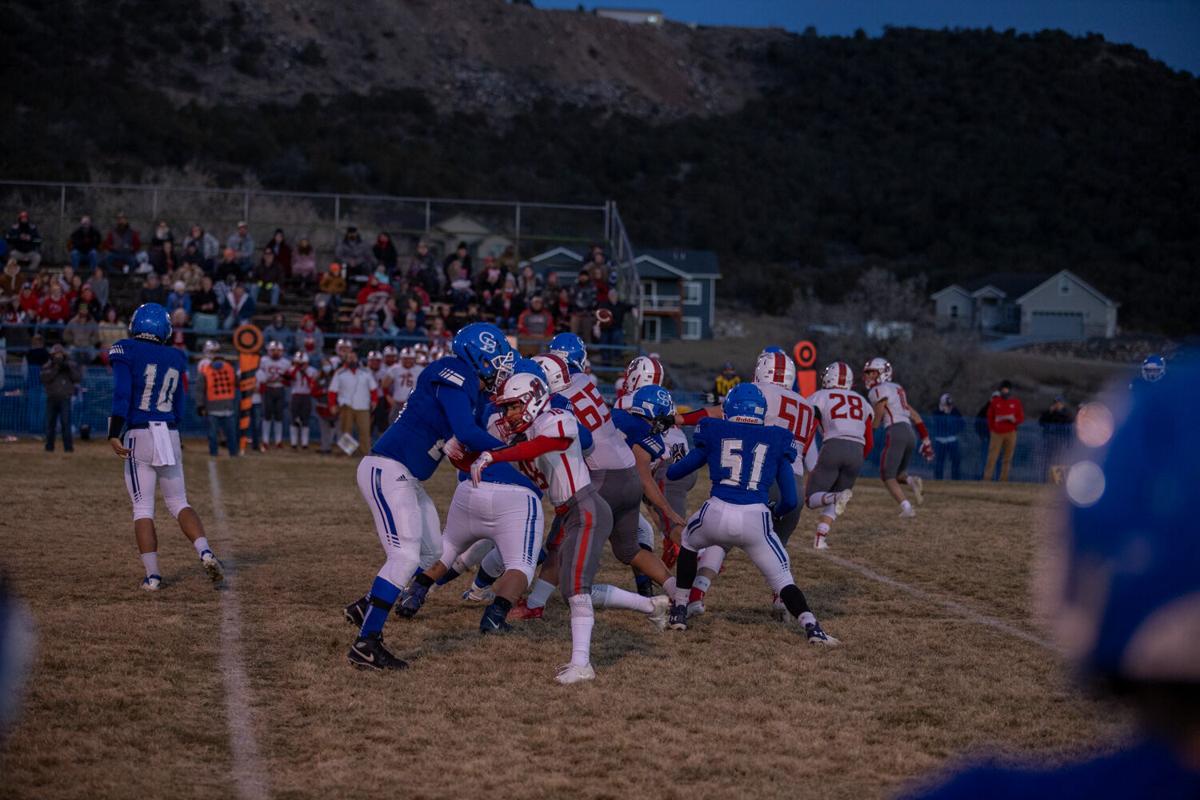 Last Friday night's line play in the first quarter was fierce as the Cedaredge Bruins run a play with Hotchkiss' Bulldogs deploying to stop the play. Hotchkiss eventually won the game 49-7. 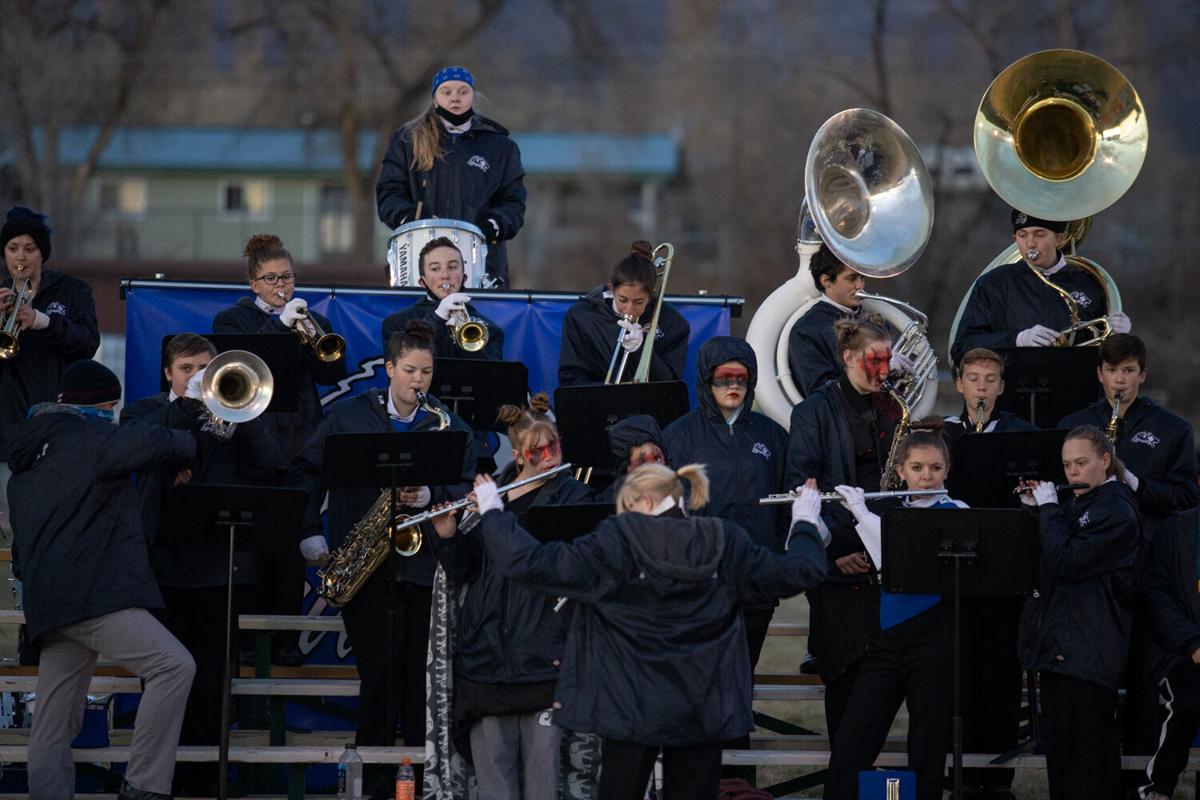 The Cedaredge High School band played every chance it got during last Friday night's football game between the Bruins and Hotchkiss High School.

Hotchkiss High School junior Mordecai White (13) receives a block from teammate Blaine Peebles on his way to a 53-yard touchdown in the opening quarter of the Bulldogs' 49-7 win over Cedaredge.

Cedaredge High School punter Colby Rupp (16) punts the ball away during first quarter action as Hotchkiss junior Coulson Hollembeak extends a hand in an attempt to block the punt.

Last Friday night's line play in the first quarter was fierce as the Cedaredge Bruins run a play with Hotchkiss' Bulldogs deploying to stop the play. Hotchkiss eventually won the game 49-7.

The Cedaredge High School band played every chance it got during last Friday night's football game between the Bruins and Hotchkiss High School.

The worry about getting through the regular season football schedule is officially a thing of the past after Hotchkiss High School’s football team completed the 2020 regular season campaign with a 49-7 win in Cedaredge last Friday, Nov. 13. With the win, Hotchkiss finished 1A Western Slope League play with a 6-0 record overall and earned the No. 5 seed in this year’s state football playoffs. Both Hotchkiss and Wray High School tied for fourth in the seeding process with the Bulldogs drawing the short straw to lose an at home game against the Eagles. Instead, Hotchkiss will make the trek across the state to take on the 5-1 Eagles in a Saturday contest scheduled for a 12 p.m. kickoff.

Hotchkiss coach Curtis Hintz is treating the news of a 5th seed, and road game, the same way he has treated the regular season. “Our motto this year has been to control what we can control. It’s the same with the playoffs. Wray will be well coached and a physical team. They have some really solid kids up front and their quarterback runs the offense really well. But, we have to get better this week and we’ll be ready for a great playoff atmosphere and game. It’s a top five match and it’s going to be fun.”

Against Cedaredge, the Bulldogs used junior Mordecai White’s 53-yard scamper to put Hotchkiss on the scoreboard with 8:56 left in the opening quarter. Senior Saul Cortez kicked the extra point to give Hotchkiss an early 7-0 lead.

In its second possession, a determined Cedaredge team moved the ball into Hotchkiss territory only to lose the ball on downs and punt the ball back to the Bulldogs. Hotchkiss had the ball at the Bruins’ 17-yard line as time in the opening quarter expired.

The Bulldogs scored their second touchdown on senior quarterback Yahir Chavez’s 2-yard plunge with 11:17 left in the second quarter. Cortez made the second of his three extra points to make the score 14-0.

White scored his second touchdown for the Bulldogs with 8:44 left in the first half on a 6-yard run. A missed extra point gave Hotchkiss a 20-0 lead. After another Bruins’ punt, Hotchkiss junior Drayden Taylor scored a touchdown from three yards out. A 2-point conversion by senior Oliver Mendoza pushed Hotchkiss’ score to 28-0 with 2:39 left in the half.

Junior Blaine Peebles intercepted a Cedaredge pass from Jacob Brown to stop a potential scoring drive late in the quarter and allowed the Bulldogs to take a 28-0 lead to halftime.

In second half play, senior running back Traycer Hall scored Hotchkiss’ fifth touchdown of the game on a 9-yard run to start the third quarter. Cortez was successful with his kick for the extra point with Hotchkiss extending its lead to 35-0.

Cedaredge avoided a shutout on the ensuing kickoff from the Bulldogs with senior Alex Barron scoring on an 80-yard kickoff return for six points. Senior Brody Wagner booted the extra point to make the score 35-7.

Hotchkiss senior Christian Matus scored a safety on a tackle in the end zone later in the third period and Peebles scored on a 13-yard pass from Chavez and White added his third TD of the game in the fourth quarter to make the final score 49-7.

The Bulldogs had 61 yards on four of nine passing with a touchdown while the the ground game picked up 393 yards on 42 carries and scored six touchdowns in the game. White led the rushing attack with 141 yards on nine carries with Taylor toting the pigskin 17 times for 106 yards and a touchdown. Hall finished the game with 59 yards on six carries and Chavez ran for 48 yards on six carries. In all, the Bulldogs had 454 total yards of offense in the game.

Cedaredge’s passing game picked up 53 yards on seven of 18 passes. The Bruins’ top running back, Conner Brooks, paced Cedaredge’s running game with 11 rushes for 26 yards with the Bruins finishing the game with 79 yards of total offense.

While Hotchkiss will be engaging Wray’s Eagles in the first round of the 1A state playoffs, Cedaredge will be preparing for its final game of the season at home on Saturday, Nov. 21, against 1A foe Wiggins with kickoff set for 1 p.m. The Tigers, from the newly organized 1A North Central League, finished their 2020 season, in a league which sent three teams to this year’s state playoffs, Limon (No. 1), Wray (No. 4) and Holyoke (No. 8). Wiggins finished last in league play with an 0-5 league record and 1-5 overall.

A Labor of Love: Lark Abel fashions a luminous tribute to a timeless poet