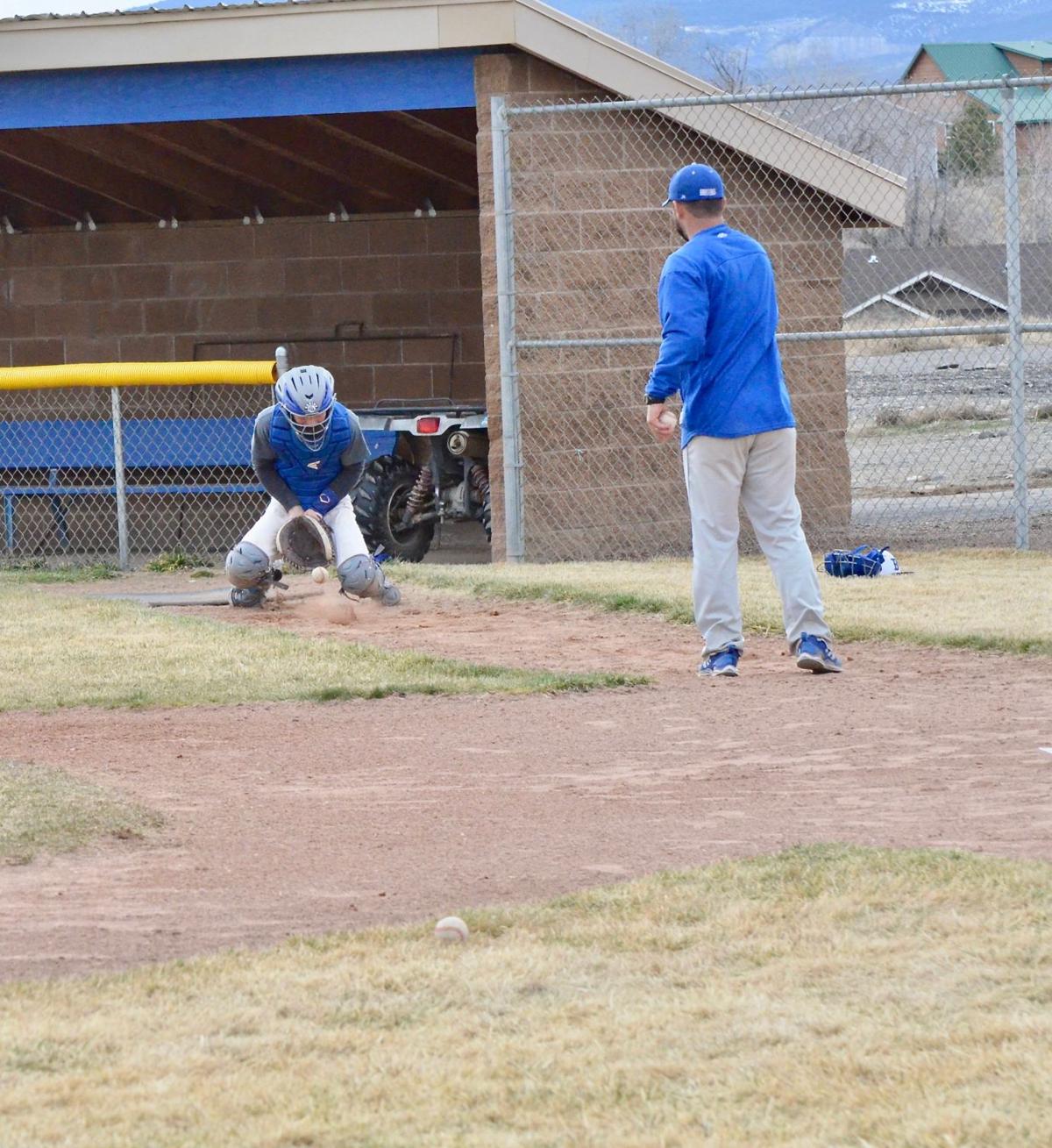 Cedaredge High School's head baseball coach, Terry Montoya, throws a baseball into the dirt in front of one of his two catchers to allow them to improve on blocking techniques for errant pitches. 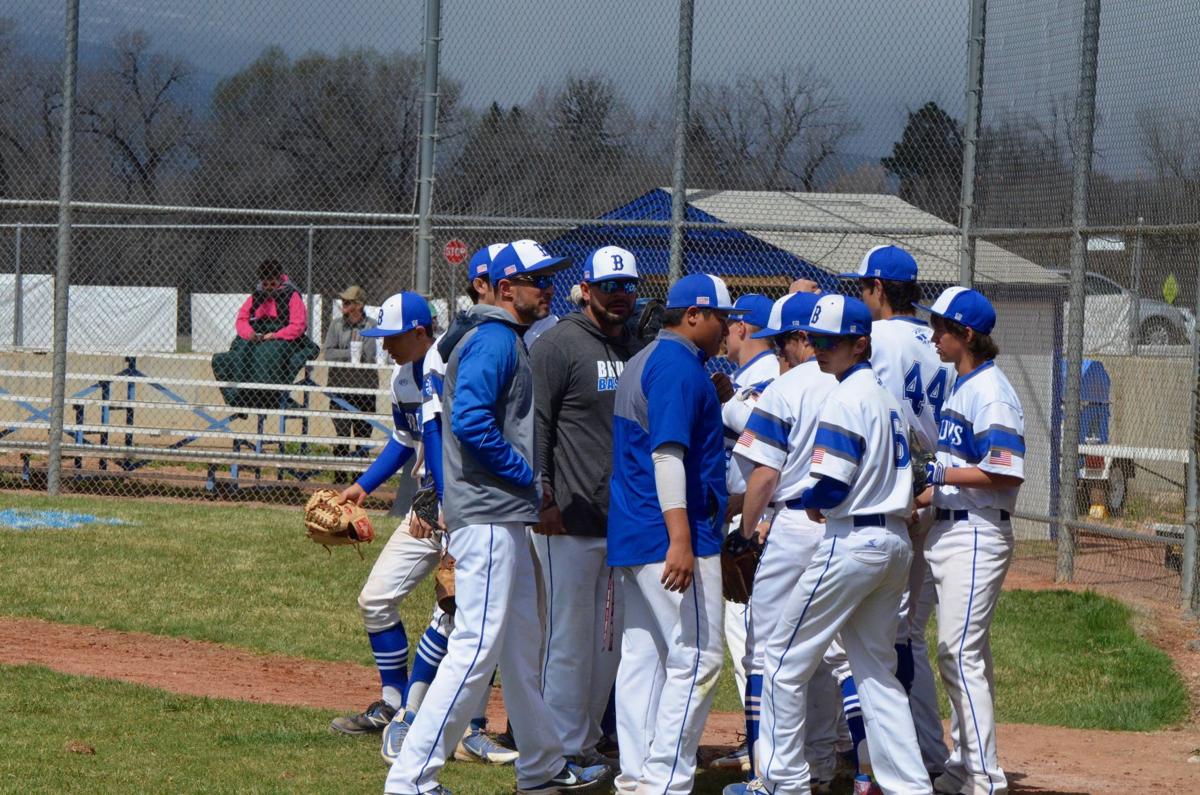 Cedaredge High School's baseball team breaks a team huddle prior to playing a game against Basalt on April 14, 2019.

Cedaredge High School's head baseball coach, Terry Montoya, throws a baseball into the dirt in front of one of his two catchers to allow them to improve on blocking techniques for errant pitches.

Cedaredge High School's baseball team breaks a team huddle prior to playing a game against Basalt on April 14, 2019.

Like all the rest of the athletic teams across the state of Colorado, Cedaredge High School is hoping to play the majority of its scheduled baseball games in 2020 if the Coronavirus (COVID-19) pandemic loosens its grip on society by April 18, the target date for resuming a suspended sports and academic activities schedule imposed by the state of Colorado and the Colorado High School Activities Association.

Cedaredge head baseball coach Terry Montoya was skeptical of what to expect in the first week of March when teams were allowed to begin practicing. Montoya and David Blair will guide this year’s Cedaredge varsity team while first-year coach Brandon Fuller will coach the junior varsity team.

The Bruins have 20 players out this season with some impressive players projected to lead Cedaredge to a good season. Cedaredge was 12-12 in 2019 and lost in the first round of regional play to Jefferson Academy 9-8.

Sophomore Ty Walck returns as a letter winner and is a utility player and pitcher for Cedaredge. Other first-year players include Hunter Kissner (1B/P), Jory Hoerr and Lucas Hoerr (INF).

Jackson Cooper (OF) and Kyle Brown (UTL) are freshmen.

Coach Montoya’s leaders for 2020 will be Dale, Emig, Jacob Brown, Geyer and Blair.

A strength for Cedaredge in 2020 is its senior class.

“We have a great senior class that is tough. They love to compete and they lead by example on and off the field,” noted Montoya. Each player has a characteristic Montoya sees as a unique style which blends together for a cohesive team. “The thing I like most is that these guys genuinely care for one another and the rest of the guys on the team.”

Montoya is motivational in his approach to coaching and stresses enjoying the season, moment, the process, and each other. “We want to work hard, lay it on the line, and make memories,” said Montoya.

To make the postseason playoffs, Montoya doesn’t have a singular team he considers THE contender. He sees all teams as contenders. “We need to control what we can control and have some fun.”

Montoya also took the time to address the COVID-19 issue with his personal thoughts. “I was very upset initially because at the time we were still in the classroom. I had a hard time understanding how we were allowed to be in a classroom with 20-plus people but not on a baseball field.” There was a lot of emotion from the Bruins’ baseball team prior to the suspension announcement. Fortunately for Montoya, and the team, there was a team talk the day before the announcement about controlling things that can be controlled with the situation at hand. “It was a great opportunity to humble ourselves and figure out our priorities. I think with the announcement, we all were very humbled and the phrase, ‘play each play like it’s your last,’ really sunk in for some and it was tough.”

One of the toughest parts of the ordeal is how senior players are affected by the suspension. “My seniors are staying upbeat about the potential of having a short season, but because it is unknown if that will happen, the conversations have been little about baseball and more about life.”

Being prepared to play a shortened version of the 2020 baseball season is certainly a concern for coaches and players at this point. “I have no idea about that,” noted Montoya. His thoughts on a shortened season is a far cry from the original goals most coaches carry into their first games in any sport. The will to win is inherent in most athletes and coaches. For Montoya, “I have 20 guys on this team and if we can play again ... all 20 will play every game. I couldn’t care less about winning at this point. We have a saying up here (Cedaredge High School) and it’s never meant more than now ... Together ... For Each Other.”