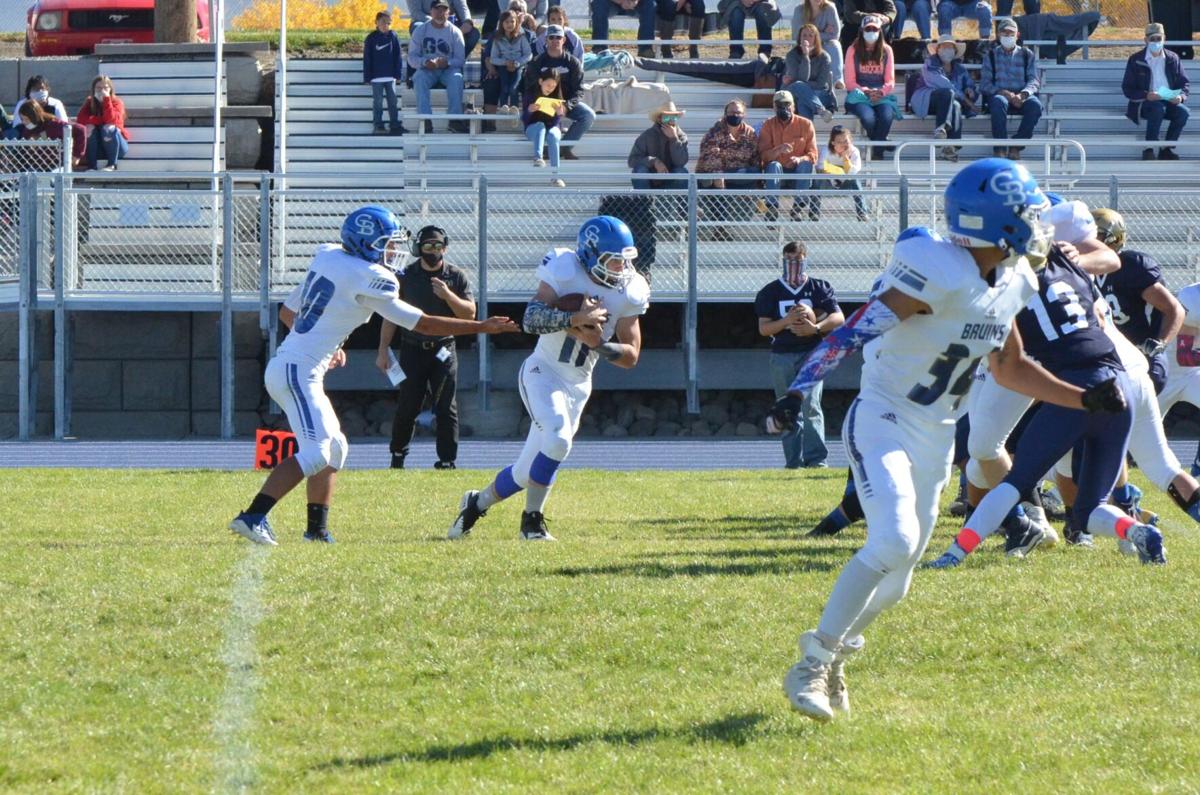 This Jacob Brown to Conner Brooks handoff was a common sight last Saturday at Olathe High School where the Cedaredge High School Bruins outlasted the Pirates, 14-12, in a key 1A WSL contest. 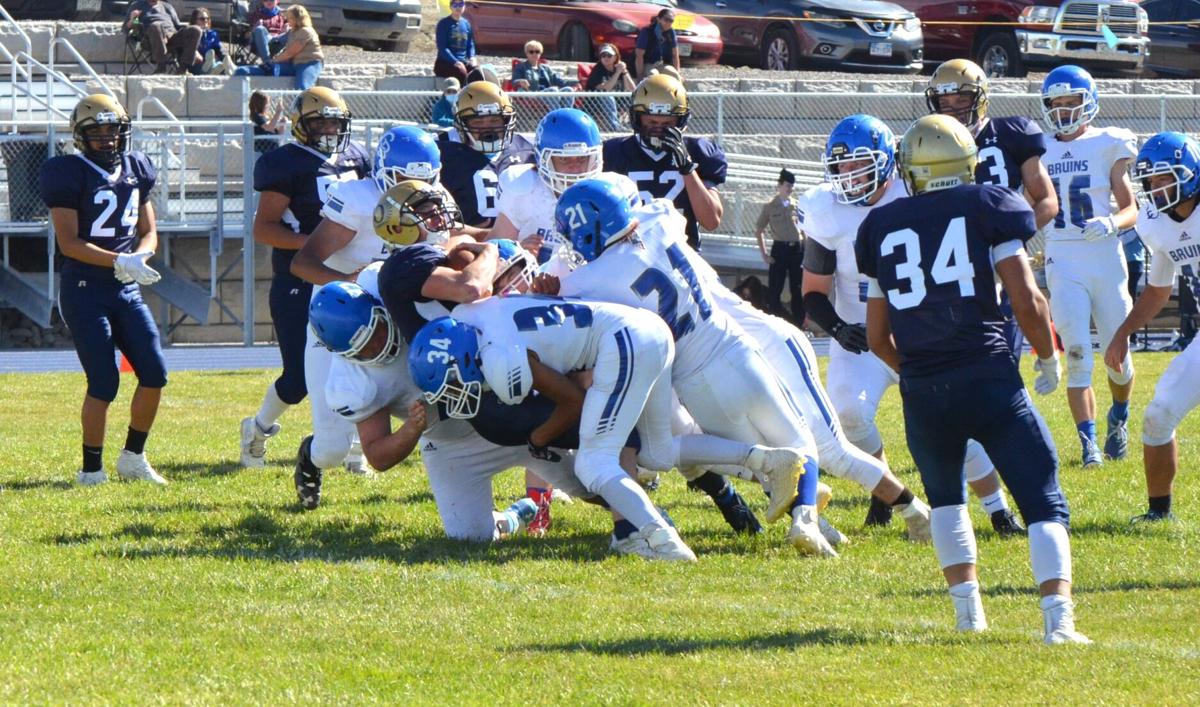 Olathe High School quarterback Gavin Hall was swarmed over by the Cedaredge defense in a game played in Olathe last Saturday. The Bruins won the game on a third quarter touchdown to win the game 14-12. 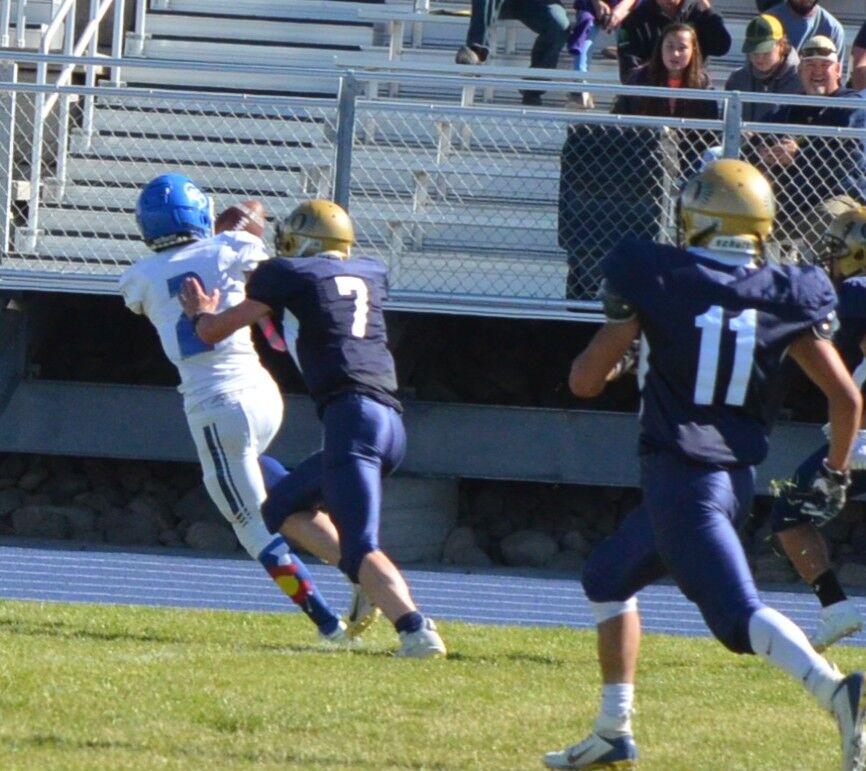 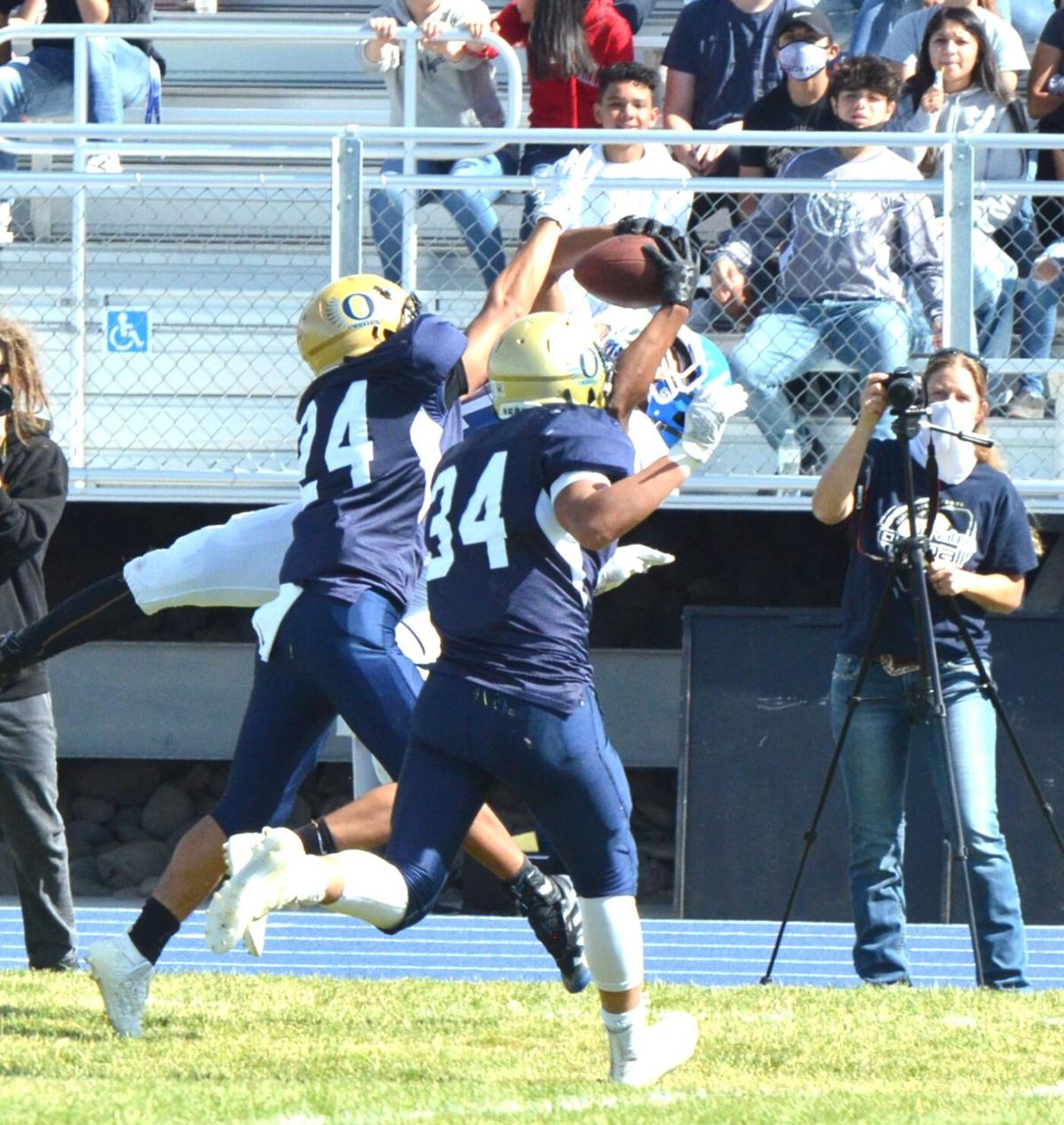 Olathe High School defenders Cody Biesek (24) and Xzavier Waterman (34) can only watch as Cedaredge's Alex Barron makes a great catch of a Jacob Brown pass last week in Olathe. Unfortunately, Barron was out of bounds when he landed making the pass incomplete. The Bruins needed a third quarter touchdown to defeat the Pirates, 14-12, in a key 1A WSL contest.

This Jacob Brown to Conner Brooks handoff was a common sight last Saturday at Olathe High School where the Cedaredge High School Bruins outlasted the Pirates, 14-12, in a key 1A WSL contest.

Olathe High School quarterback Gavin Hall was swarmed over by the Cedaredge defense in a game played in Olathe last Saturday. The Bruins won the game on a third quarter touchdown to win the game 14-12.

Olathe High School defenders Cody Biesek (24) and Xzavier Waterman (34) can only watch as Cedaredge's Alex Barron makes a great catch of a Jacob Brown pass last week in Olathe. Unfortunately, Barron was out of bounds when he landed making the pass incomplete. The Bruins needed a third quarter touchdown to defeat the Pirates, 14-12, in a key 1A WSL contest.

In a battle of unbeatens in the 1A WSL, Cedaredge High School scored a in the third quarter to come from behind and score a 14-12 conference win over Olathe High School’s Pirates on Saturday, Oct. 17.

Cedaredge got the ball to begin the game and started its first possession on the Olathe 45-yard line. Seniors Conner Brooks and Jacob Brown had the bulk of the work as the Bruins moved the ball to Olathe’s 15 before the Pirates’ defense stiffened to force a loss of possession on downs after a fourth and one produced just one yard. Olathe took over on its own 15-yard line.

Olathe senior Wyatt Mansker gave the Pirates a first down with a 15-yard run to Olathe’s 30. The next three plays netted the Pirates just five yards to send Jerrel Vigil back to punt the ball away. Cedaredge fared no better on its next possession, beginning at the Bruins 35, and ending on the Bruins 40 with senior Colby Rupp punting the ball back to Olathe.

A 10-yard run from Mansker and keepers by senior quarterback Gavin Hall had the ball resting on Cedaredge’s 44-yard line. Junior running back Xzavier Waterman coughed up the ball on the next play with Cedaredge senior Alex Barron recovering the ball on the 40-yard line for the Bruins’ next possession.

A pass from Jacob Brown to senior Sterling Brown covered seven yards to the Bruins’ 47. Cedaredge fumbled the ball back to the Bruins with Olathe’s Silvano Alejandro falling on the ball for the Pirates.

Olathe had the ball at Cedaredge’s 36 when the clock expired in the first quarter with a 0-0 score.

Two penalties on Olathe’s drive prevented the Pirates from getting past the Cedaredge 40, and Vigil had to kick the ball away again.

Cedaredge started its next drive from its own 20-yard line following Vigil’s kick. A 10-yard run from Brooks and six from Brown moved the ball to the Bruins 36 before a Brooks fumble left the ball at the 36 with Cedaredge recovering the ball. An attempted pass to Rupp was incomplete forcing Rupp to drop back to punt the ball away. The center’s snap sailed over Rupp’s head and came to rest on Cedaredge’s 12-yard line, where the Pirates took over.

Mansker delivered runs of seven and four with Hall taking the ball in from 1-yard out for the game’s first score with 7:46 remaining in the first half. Gavin’s run for the extra point failed leaving Olathe with a 6-0 lead.

Cedaredge moved the ball from its own 35 to Olathe’s 10 with help of big pass plays to Sterling Brown (35 yards) and Barron (20 yards). Runs by Jacob Brown (2 yards) and Brooks (3 yards) had the ball resting on Olathe’s 5-yard line. The Bruins lost the ball on downs when a fourth and five play failed to produce a score. Olathe’s next possession ended in a loss of possession on downs as well to set up Cedaredge’s only score of the first half.

The Bruins began their scoring drive from Olathe’s 14 and used three plays, ending with Brooks’ 13-yard run into the end zone with 2:16 left before halftime. Senior Brody Wagner booted the extra point to give Cedaredge a short-lived 7-6 lead.

Olathe took possession of its next drive at the Pirates’ 30-yard line and on the first play, Hall found Vigil open for a 55-yard catch and run play to the Bruins 15. Two plays later Waterman scooted into the end zone from 2-yards out for the touchdown. A try for a 2-point conversion failed and left Olathe ahead 12-7 at halftime.

Following a punt from Vigil after three plays, the Bruins took possession of the ball at their own 36-yard line. Brooks and Jacob Brown were again instrumental in moving the ball on the ground to Olathe’s 45-yard line. Two penalties, an offside and a personal foul, moved the ball to Olathe’s 22-yard line. Brown finished the drive with a pass to Barron for the final 22 yards and a 13-12 Cedaredge lead with 6:56 left in the game. Wagner’s PAT kick made it 14-12.

The Pirates started their final drive of the third quarter from their own 20-yard line and moved the ball down the field to Cedaredge’s 19-yard line as time was winding down. An unsportsmanlike conduct penalty on fourth down ended the threat and gave Cedaredge the ball on its own 34-yard line when the fourth quarter began.

Neither team could get the ball into the end zone, though the Bruins had a good drive going to begin the final quarter. Cedaredge was keeping the ball on the ground using Brooks, Brown and Trey Geyer when Brown was hit hard at the 10 and fumbled the ball with Olathe coming up with the loose ball.

Each team punted the ball away on their next possessions with the Pirates losing the ball on downs on their final possession of the game. Cedaredge used the running of Brooks on runs of 11 and 3 yards to get first downs and keep possession to run out the clock for the important 14-12 win.

Brooks was Cedaredge’s leading rusher with 115 yards on 21 carries and a touchdown, followed by Brown’s 50 yards and 11 carries.

Olathe’s offensive game showed Hall with 101 yards (unofficial) on six of 12 passing and Mansker’s 60 yards on 19 carries led the way on the ground.

Defensively, seniors Cris Alejandre and Wagner had 10 tackles each to lead the Bruins with senior AJ Robidoux adding eight tackles, and Jacob Brown and senior Justin Henley making six tackles each in the win.

Following the game, Cedaredge coach Craig Cerise talked about the hard fought win over the Pirates. “We always warn our kids about Olathe as it is a tough one to get because they play hard and want to beat us each year. We knew it would be hard to stop their offense and hoped to bend and not break on defense. We had much more consistency in the second half and thought we were turning the corner when we fumbled deep in their territory to stop a drive. Our depth was key with the substitutions on defense and offense helping us play a consistent game.”

There’s a logjam at the top of the 1A WSL standings with three teams entering this week’s play with 2-0 overall records and 1-0 league marks. Meeker, Cedaredge and Hotchkiss all carry identical records into this week’s games with Gunnison (5th in league) at Cedaredge and Meeker visiting Hotchkiss on Saturday, Oct. 24, at 2 p.m.