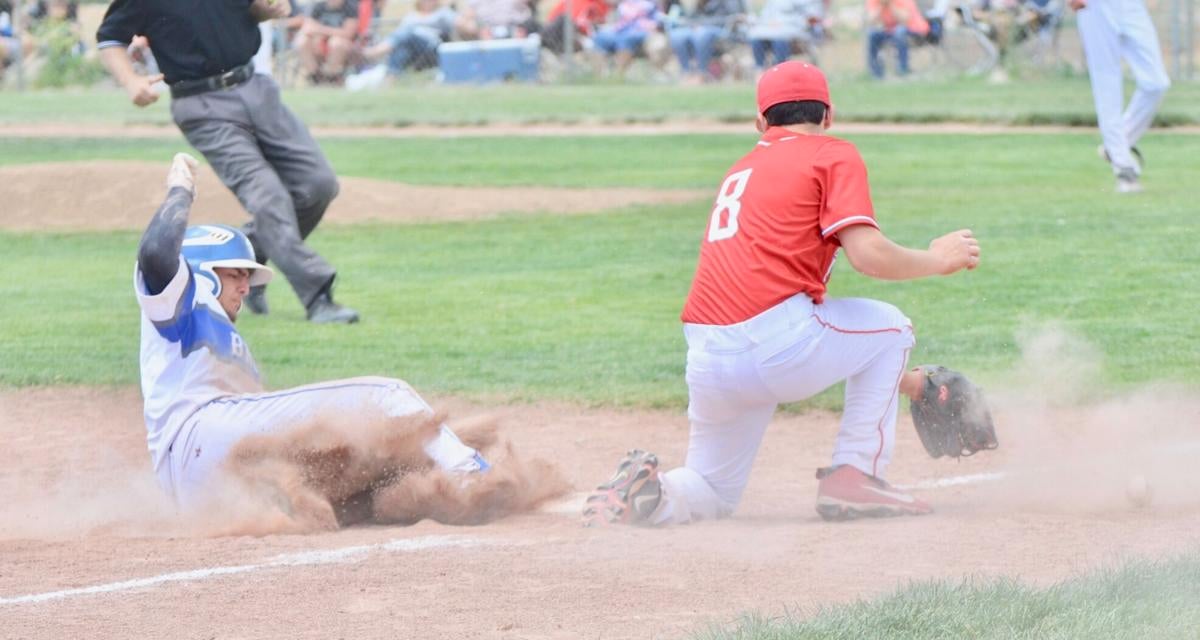 Cedaredge third baseman Ty Walck slides safely into third as Hotchkiss' Tyler Marks (8) loses the ball. Cedaredge won the opener of a doubleheader with the Bulldogs, 6-5 in eight innings, and Hotchkiss blanked the Bruins 11-0 in game two for a split. 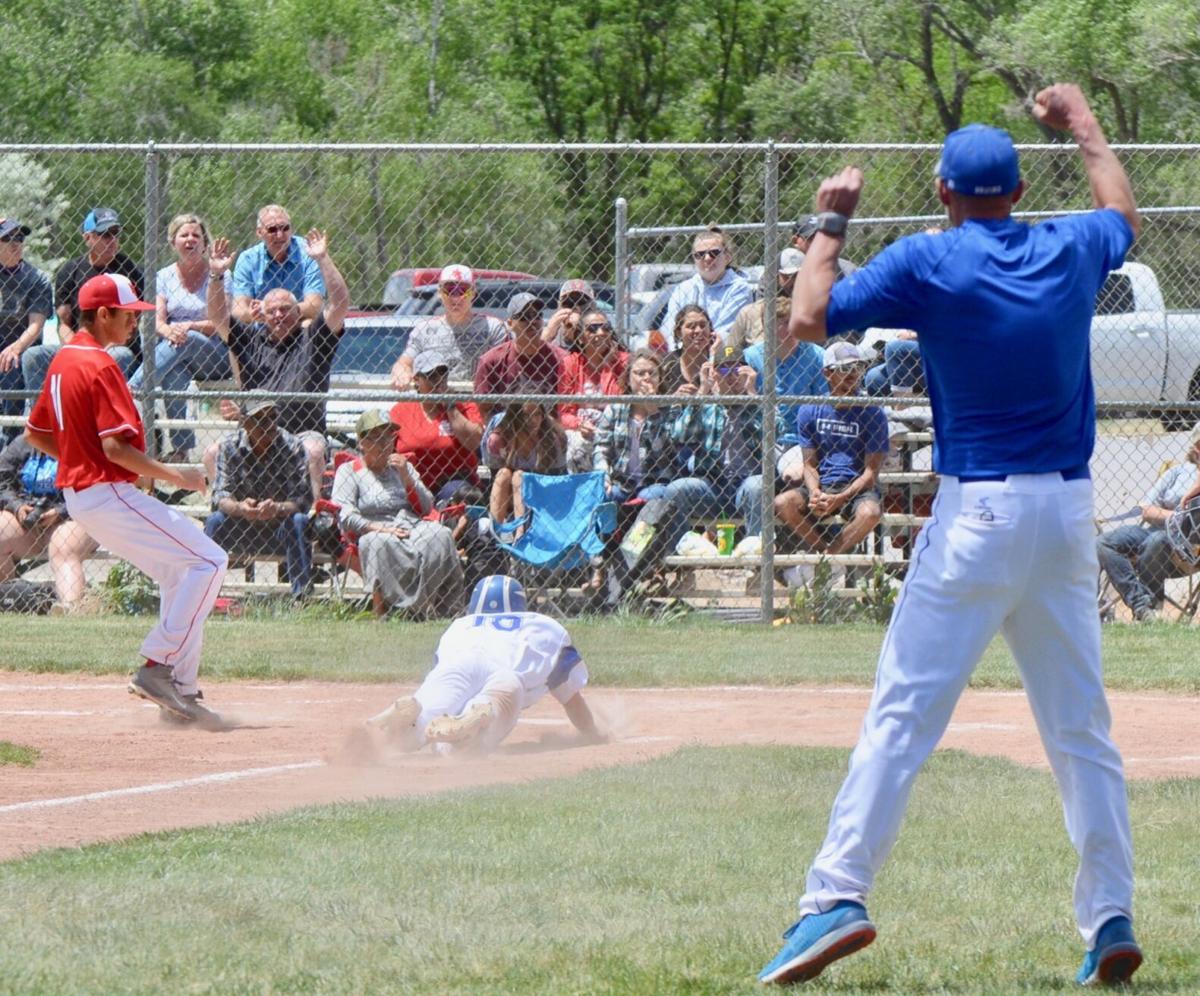 Jackson Cooper slides across home plate to score the winning run in game one of a doubleheader played between Hotchkiss and Cedaredge. Cooper scored from third after Hotchkiss reliever Matt Pachl and catcher Drayden Taylor failed to make connection on a pitch that went all the way to the back stop. Cedaredge's 6-5 win came in the bottom of the eighth inning.

Cedaredge third baseman Ty Walck slides safely into third as Hotchkiss' Tyler Marks (8) loses the ball. Cedaredge won the opener of a doubleheader with the Bulldogs, 6-5 in eight innings, and Hotchkiss blanked the Bruins 11-0 in game two for a split.

Jackson Cooper slides across home plate to score the winning run in game one of a doubleheader played between Hotchkiss and Cedaredge. Cooper scored from third after Hotchkiss reliever Matt Pachl and catcher Drayden Taylor failed to make connection on a pitch that went all the way to the back stop. Cedaredge's 6-5 win came in the bottom of the eighth inning.

Following a Cedaredge High School win in Olathe on Wednesday, the Bruins and Hotchkiss entered last Saturday’s showdown in 2A Western Slope League battle for the top spot. Cedaredge (6-0 overall and 6-0 league) reached that level after smothering Olathe (3-5 and 2-3) on May 19, 18-2. The Bulldogs (5-0 and 3-0) have gained their record with solid play and haven’t had as many games as Cedaredge to account for the difference in records. Both teams feature strong pitching and some formidable hitters. Each team has played Olathe and has recorded easy wins and offer no basis for predicting an advantage for either team in the coming doubleheader that was played in Cedaredge on May 22. The two teams split games with the Bruins winning the first game 6-5 in extra innings, and the Bulldogs bouncing back for an 11-0 win in game two.

Cedaredge’s game against Olathe on Wednesday was all Bruins with the visiting team scoring four times in the opening frame and adding eight runs in the second inning. Another four runs in the top of the third gave the Bruins a 16-0 lead. The Pirates scored twice in the bottom of the third and that’s the last time Olathe’s offense generated a run in the game. Cedaredge’s final two scores came in the top of the fifth inning. The Bruins’ defense stopped Olathe’s offense in the bottom of the inning to make the final score 18-2.

Junior Jory Hoerr was one of Cedaredge’s leading hitters with three RBIs on two hits, including a home run. Senior Conner Brooks was right behind Hoerr’s performance with a double and a triple in three at bats for three RBIs of his own. Senior Trey Geyer scored two runs for the Bruins and also hit a home run in his two-RBI day. Senior Derek Sanchez went 2-2 for two RBIs and junior Hunter Kissner and senior Colby Rupp had doubles in the game to cap a 23-hit day for Cedaredge.

A trio of pitchers worked from the hill in the Bruins victory. Geyer went two innings with shutout baseball and five strikeouts and senior Isaac Blair also worked two innings giving up two runs and two walks against five strikeouts. Senior Jacob Brown finished the game with a walk and a strikeout in his one inning.

Saturday’s big showdown proved to be just that in the first game. Neither team was dominating with offense but used their defenses and great pitching to control the game’s tempo. Zaid Vasquez scored first for the Bulldogs in the first inning after reaching base on a single. A wild pitch accounted for Hotchkiss’ first score. Cedaredge’s first score came in the bottom of the second after Derek Sanchez reached base on a single with two outs. Sanchez jogged across home plate after being walked with bases loaded to tie the game, 1-1.

The Bulldogs’ were issued walks to sophomore Yandel Guereque and junior Parker Pene and later scored to give Hotchkiss a 3-1 lead with the Bruins coming to bat in the bottom of the third. Cedaredge inched closer to the Bulldogs with Isaac Blair leading off with a double to left field and later scored to make the score 3-2.

Cedaredge starting pitcher Trey Geyer faced just three batters in the top of the fourth inning and picked up his sixth strikeout to end the inning with the score remaining 3-2 in favor of the Bulldogs.

With two outs in the fourth inning, sophomore Jackson Cooper was plunked in the helmet by a Pene pitch and came around the base paths to score on a Geyer double, tying the score at 3-3.

Geyer retired the Bulldogs in order in the top of the fifth for the second straight inning of no hits and no runs. The senior rightie picked up two more strikeouts in the inning, running his strikeout totals to eight. Bruins’ coach David Blair replaced Geyer with senior Jacob Brown to get the final two outs of the inning. Cedaredge’s half of the fifth failed to produce any runs to leave the score tied at 3-3.

The Bulldogs left one man on in the top of the sixth but wasn’t able to find a run. Sanchez drew a walk for the Bruins to lead off the bottom of the sixth. Junior Lucas Hoerr was called on to pinch run for Sanchez. Hotchkiss coach Blake Carlquist made a change on the mound after Pene issued the walk to Sanchez, replacing him with junior Matt Pachl to get three outs and save the inning. Lucas Hoerr scored the go ahead run for Cedaredge on a balk before Pachl could get all three outs.

Hotchkiss regrouped for two runs in the top of the seventh to take a 5-4 lead after leaving two men on base. The Bruins used an error to get senior Colby Rupp on base in the bottom of the seventh, and an RBI single from junior Ty Walck tied the game at 5-5 to force an extra inning.

Brown faced five batters in the eighth inning and struck out two of them before getting the final out on a ground out to Geyer at shortstop. Cooper’s third hit of the game eventually made a hero out of him as he scored the winning run from third base on a passed ball that went all the way to the backstop.

Jackson’s three hits in the game included a double and a triple. Geyer had a double in the game that accounted for his two RBIs and Walck’s single in four at bats scored two runs for the winners. Hotchkiss junior Coulson Hollembeak had the big bat for the Bulldogs with two hits and two RBIs. Junior Tyler Marks and Guereque had an RBI each for Hotchkiss in the loss.

Following the game, the Cedaredge coaching staff commented that the game that was just played lived up to its billing. “There were two great teams and we were fortunate to win it,” stated Cedaredge Coach Blair. “They were aggressive and well coached.”

On the other side of the diamond, Coach Carlquist was equally appreciative of the type of game the two teams had played. “It was a good game. It’s kind of what we expected. Kudos to our pitchers for keeping us in the game and the players for their efforts. We’re proud of our kids.” In referencing the second game of the doubleheader, “Now we’ll see how well we respond,” said Carlquist.

The Bulldogs were in total command of the second game with Yandell Guereque on the mound and giving up just two hits, singles from Blair and Cooper, in the six-inning game.

Hotchkiss scored single runs in each of the second and third innings, with three runs in the fourth and four in the fifth. A two-run sixth put the 10-run rule into effect to end the game, 11-0.

The Bruins are shown in first place in the 2A Western Slope League with a 7-1 record and Hotchkiss is right there in second place with its 6-1 overall mark and 4-1 league record.

Cedaredge’s baseball team plays a doubleheader, beginning at 3 p.m. against Meeker on Friday, May 28.