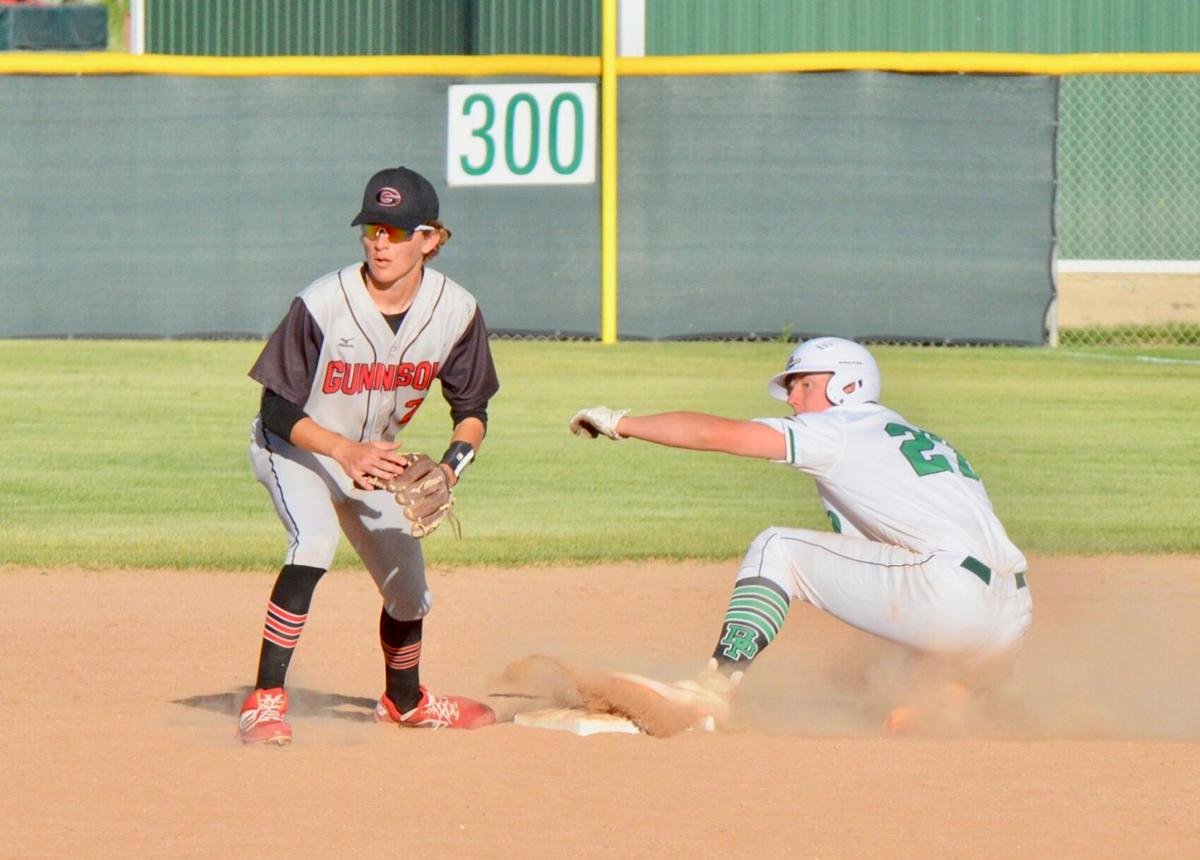 Delta's Brendan Baier slides into second base as he watches the flight of the ball from the outfield after hitting his second double of the Panther's 7-6 come from behind win over Gunnison on Thursday (June 3). 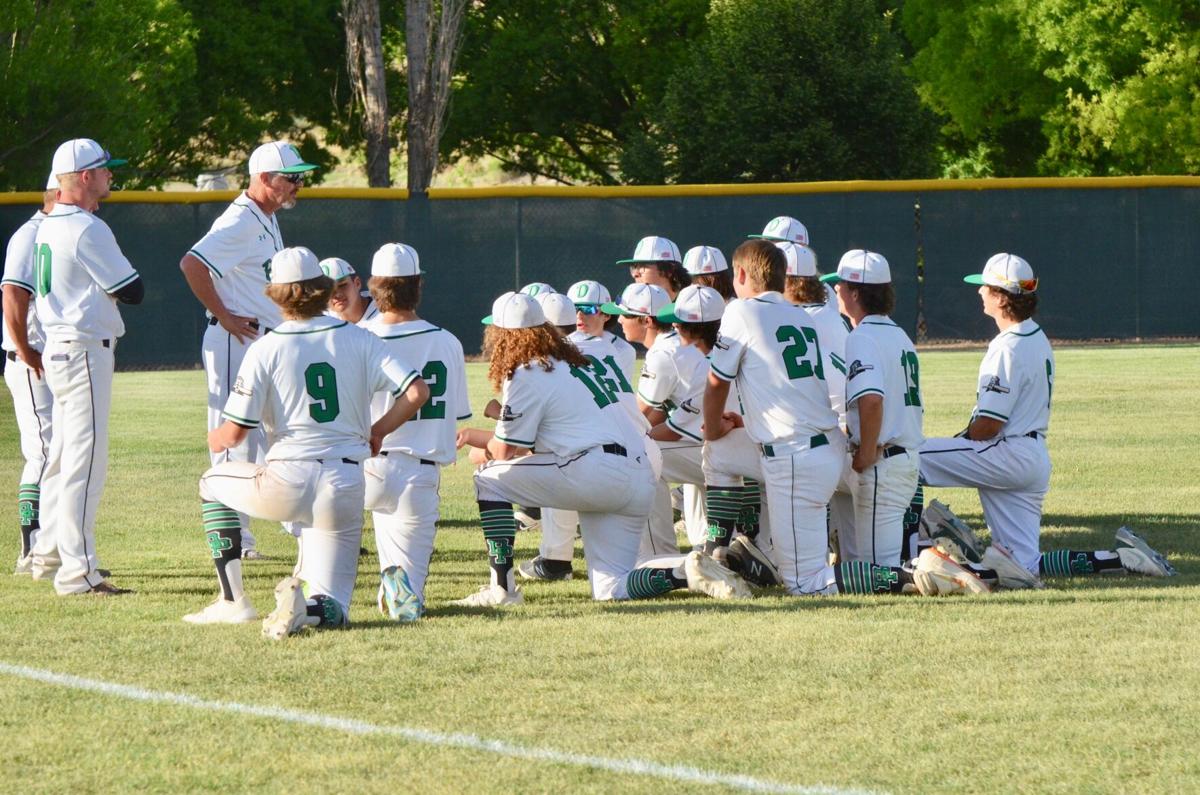 A happy group of Delta Panthers listen as an equally happy head coach, Steve Reiher, talks to players after a 7-6 win over Gunnison. 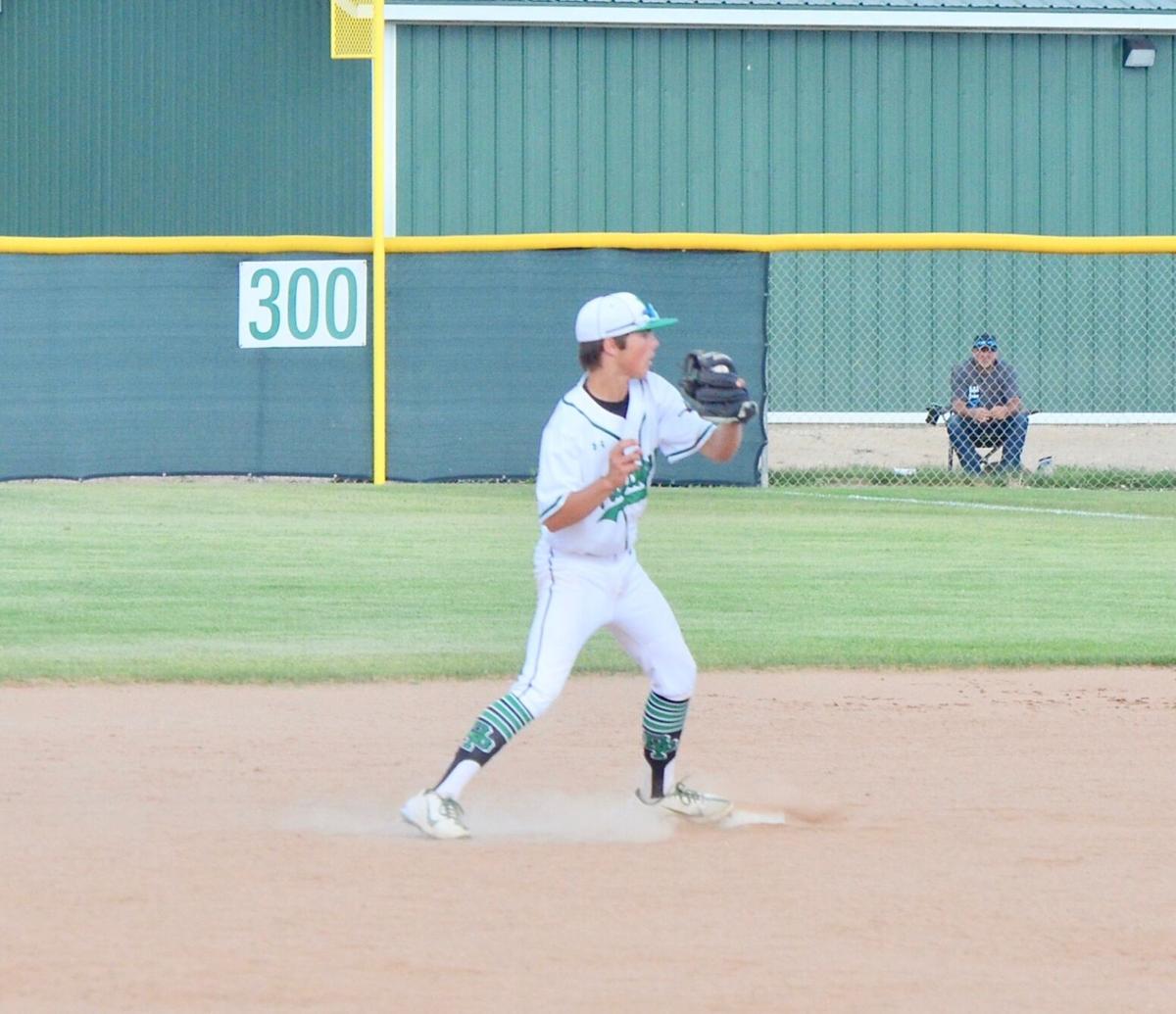 Freshman Landan Clay steps on second for one out of a double play executed against Gunnison's Cowboys in a 7-6 win in the second game of a doubleheader played in Delta on Thursday, June 3.

Delta's Brendan Baier slides into second base as he watches the flight of the ball from the outfield after hitting his second double of the Panther's 7-6 come from behind win over Gunnison on Thursday (June 3).

A happy group of Delta Panthers listen as an equally happy head coach, Steve Reiher, talks to players after a 7-6 win over Gunnison.

Freshman Landan Clay steps on second for one out of a double play executed against Gunnison's Cowboys in a 7-6 win in the second game of a doubleheader played in Delta on Thursday, June 3.

The first game wasn’t something Delta High School head baseball coach Steve Reiher wanted to discuss. His Panthers, in his words, “laid an egg” in a 14-5 loss to the visiting Gunnison Cowboys in game one of a twinbill. Game two was a much better played contest with excitement down to the last inning in a 7-6 come-from-behind win for the Panthers.

Delta and Gunnison were tied at five all at the end of the third inning. The Panthers had owned a 5-3 lead before Gunnison came to bat in the top of the third. A two-run inning for the Cowboys tied the game. After that, the proverbial “egg” was laid with Gunnison adding nine more runs that produced the 14-5 loss for Delta.

Three pitchers figured in the stats for the game with senior Ezra Kathrein absorbing the loss to push his season record to 2-3. All three hurlers worked two and a third innings. Kathrein gave up two hits and four runs while junior Isaac Chavez gave up six hits and five runs and sophomore starter Braeden Sprout allowed five hits and five runs during his stint on the hill.

Sprout’s bat accounted for a 2-4 day, including a double and an RBI for the Panthers. Senior Keagan Ertel-Moralez also had an RBI for Delta.

Game two started out like it might be a blowout for the Cowboys as Gunnison scored four times, including a home run from senior Matt Solanik. Three straight singles loaded the bases for Gunnison and all three scored before the Panthers’ starting pitcher, Ertel-Moralez recorded his second strike out of the inning to end the Cowboy’s rally.

Delta went quietly in the bottom of the inning and neither team scored in the second frame to leave the score 4-0 in favor of Gunnison. Delta’s half of the third was golden with five runs being scored on four hits, including doubles from junior Treyton Sandoval and freshman Lance Porter. Braeden had one single and freshman Logan Clay tapped a single to center field to score Porter for the Panthers’ fifth run of the inning.

The Cowboys were dispatched quickly in the fourth inning with Ertel-Moralez recording his fourth and fifth strikeouts in the game. Delta threatened in the bottom of the inning with a booming double from junior catcher Brendan Baier but failed to score.

Gunnison tied the game in the fifth on senior Nico Marchitelli’s single to center field that scored Gabi Marmolejo.

In the sixth inning, Gunnison’s Ezra Hartzell reached base with a single and later scored on a passed ball from senior Brayden Carver who had replaced Ertel-Moralez in the fifth. Delta’s half of the sixth began with Carver drawing a walk and Sprout blasting a double to right center field. Logan Clay followed Sprout with a sacrifice fly to center field that scored Rylan Bynum, who had entered the game as a courtesy runner for Carver. Baier was up next and he hit his second double of the game to score Sprout to make the score 7-6.

Delta’s defense held the Cowboys in check in the top of the seventh despite a single to start the inning. A line drive toward sophomore second baseman Chaz Wilks was caught for an out and Wilks’ throw to first base got a second out when the runner there was unable to get back to the bag. Carver got the final out of the game on a ground out to shortstop Landan Clay to preserve the 7-6 upset win.

Baier was 3-4 in the game with two doubles and two RBIs followed by Porter’s 1-3 day and two RBIs. Sandoval had a double for an RBI, with the Clay brothers, Landan and Logan chipping in an RBI each in the big win.

Carver picked up his second win against a loss with two and a third innings of work with two hits and a run. Ertel-Moralez went four and two thirds innings giving up six hits, five runs and striking out four batters.

Delta improved to 7-6 overall and 6-4 in 3A WSL play. Gunnison, 10-2 and 9-2, remain on top in league standings, followed by Moffat County and Basalt with Delta in fourth.