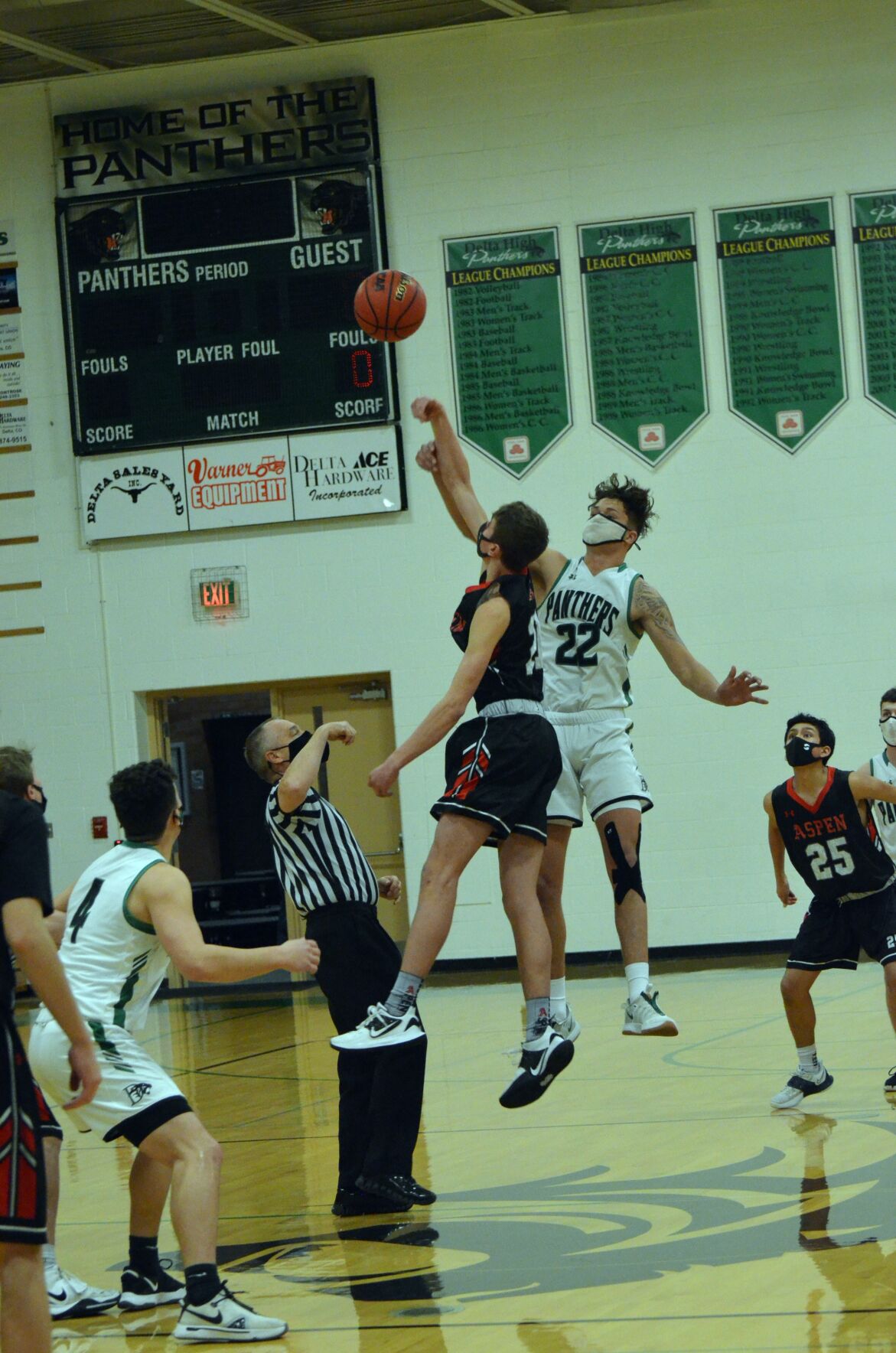 Senior Colbi Braslin won the opening tip against the visiting Gunnison Cowboys on Feb. 16. Braslin dumped in 17 points for the Panthers in a 65-53 loss. 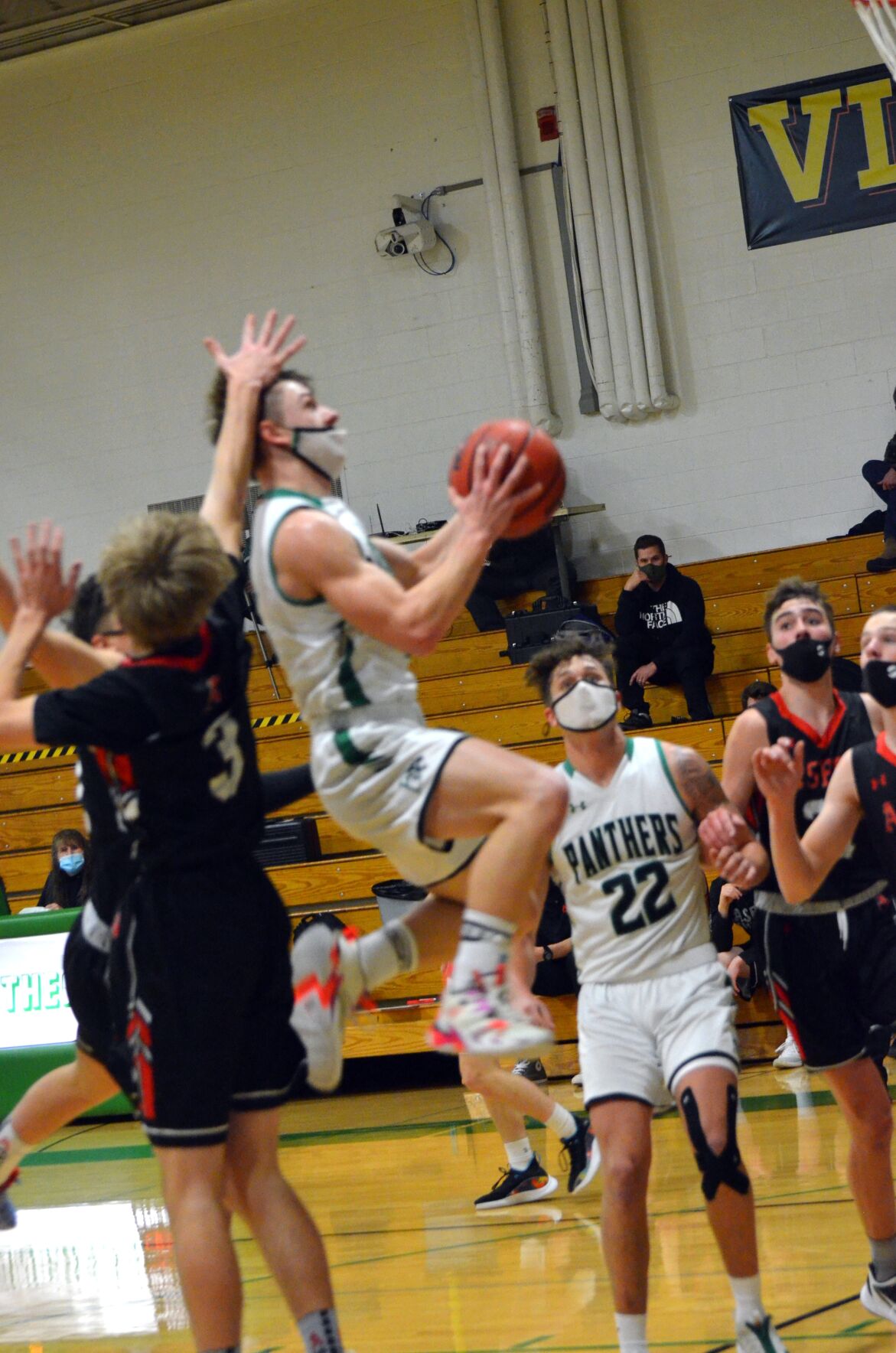 Junior Nate Scharnhorst scores two of his eight points against Gunnison's Cowboys in a 65-53 loss on Feb. 16.

Senior Colbi Braslin won the opening tip against the visiting Gunnison Cowboys on Feb. 16. Braslin dumped in 17 points for the Panthers in a 65-53 loss.

Junior Nate Scharnhorst scores two of his eight points against Gunnison's Cowboys in a 65-53 loss on Feb. 16.

Delta High School was spared an extra long week of basketball games with just three games on the docket, one boys game on Tuesday, Feb. 16, and a full slate of games in Craig against Moffat County’s Bulldogs. The Panthers’ boys were pests for the visiting Aspen Skiers for most of the game before falling, 65-53, and then lost a 12-point decision (67-55) to the Bulldogs in Craig on Saturday, Feb. 20. Delta’s girls, ranked 8th in Class 3A basketball and in the RPI race, laced up the tennis shoes and scored a big 58-41 WS-South League win on the road to move to 7-1 on the season and 3-0 in league play.

Tuesday night’s boys basketball game at home against Aspen, a top 20 Class 3A team, was close for the first half of play with Delta trailing by one, 9-8, after one period and holding that margin of deficit at halftime with a 28-27 score. The Panthers’ lack of experience was a factor in the second half with the Skiers scoring 11 more points than Delta to stretch their final margin of victory to 65-53.

Aspen, the Class 3A No. 4 team in RPI rankings, got 22 points from junior Porter Lee in the win with sophomore teammate Taylor Akin scoring 11 points.

Delta jumped out to a 14-8 first quarter lead against Moffat County on Saturday and added 10 more points to its lead by halftime to lead 33-17. Moffat County made a push to get back into the game with a third quarter run that produced 15 points to the Panthers’ eight counters. Delta regained its offensive dominance in the final period to put the game out of reach down the stretch for the 58-41 win.

Senior Alexa Huff finally put together an offensive show that generated 26 points and kept the Bulldogs at arm’s length for most of the game. Junior Erika Kuta scored 9 points and grabbed 10 rebounds and had 6 steals. Senior Marcy Schaal had 8 points, 4 assists and 3 steals for the Panthers with senior Keely Porter adding 8 points and 10 rebounds.

Delta’s game on Tuesday, Feb. 23, was a key matchup for Delta’s girls as the first place Panthers, 7-1, took on the 7-2 Coal Ridge Titans in another road game before facing second place (3A WS-South League) Basalt (8-1 and 3-1) on Friday, Feb. 26 in yet another key battle with junior varsity games set for 4:30 p.m. and the varsity games scheduled for 6:30 p.m.