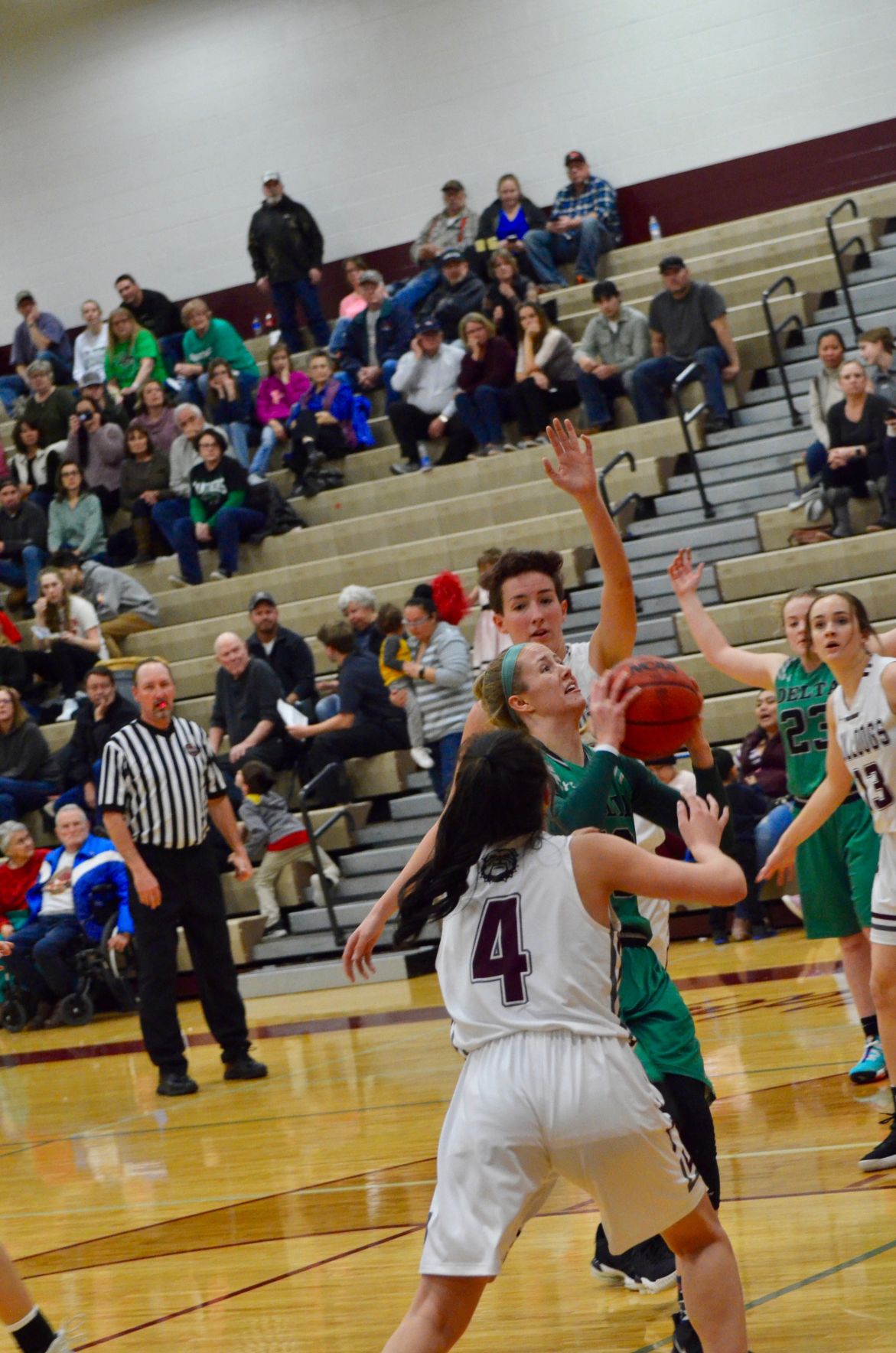 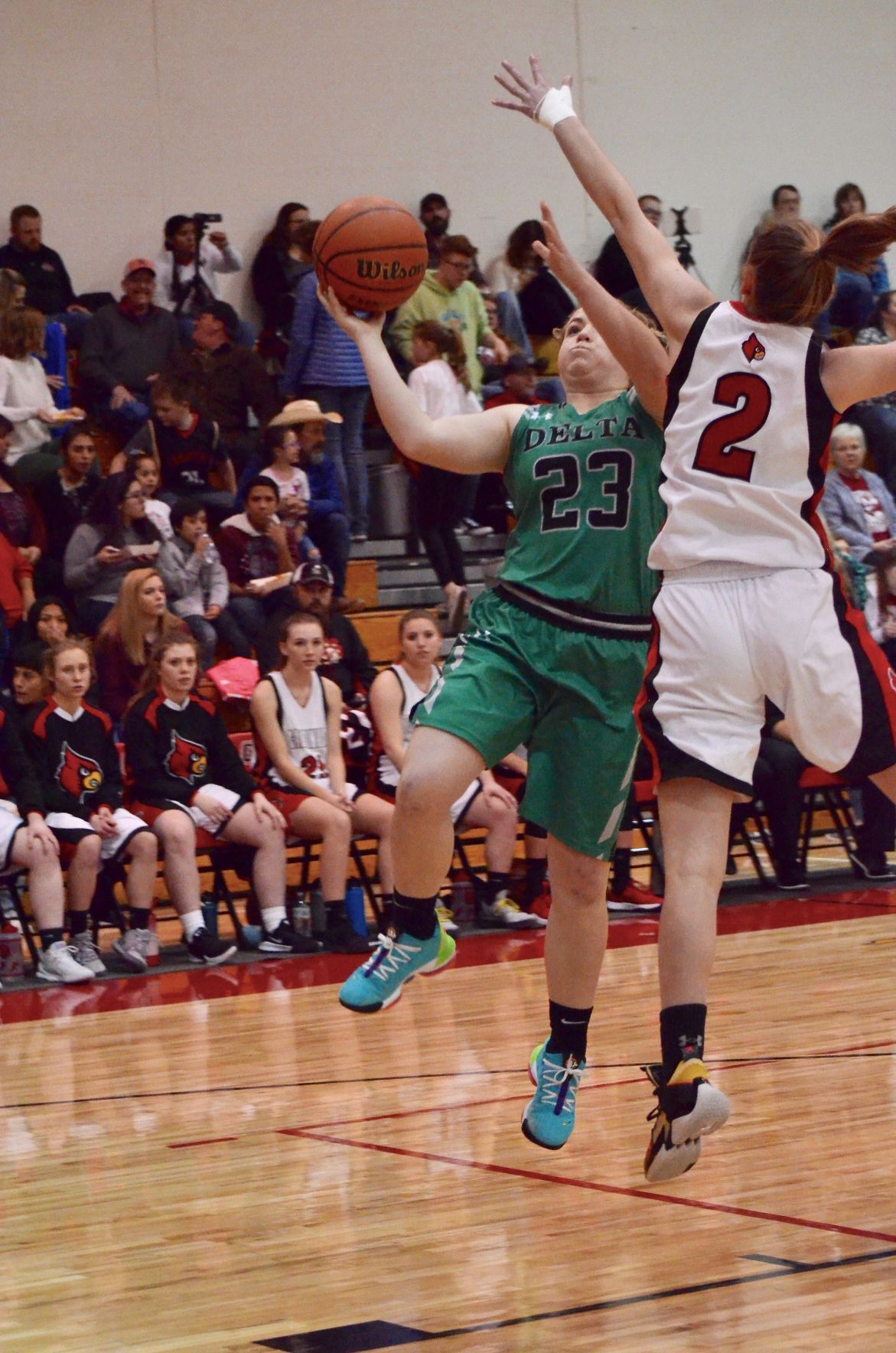 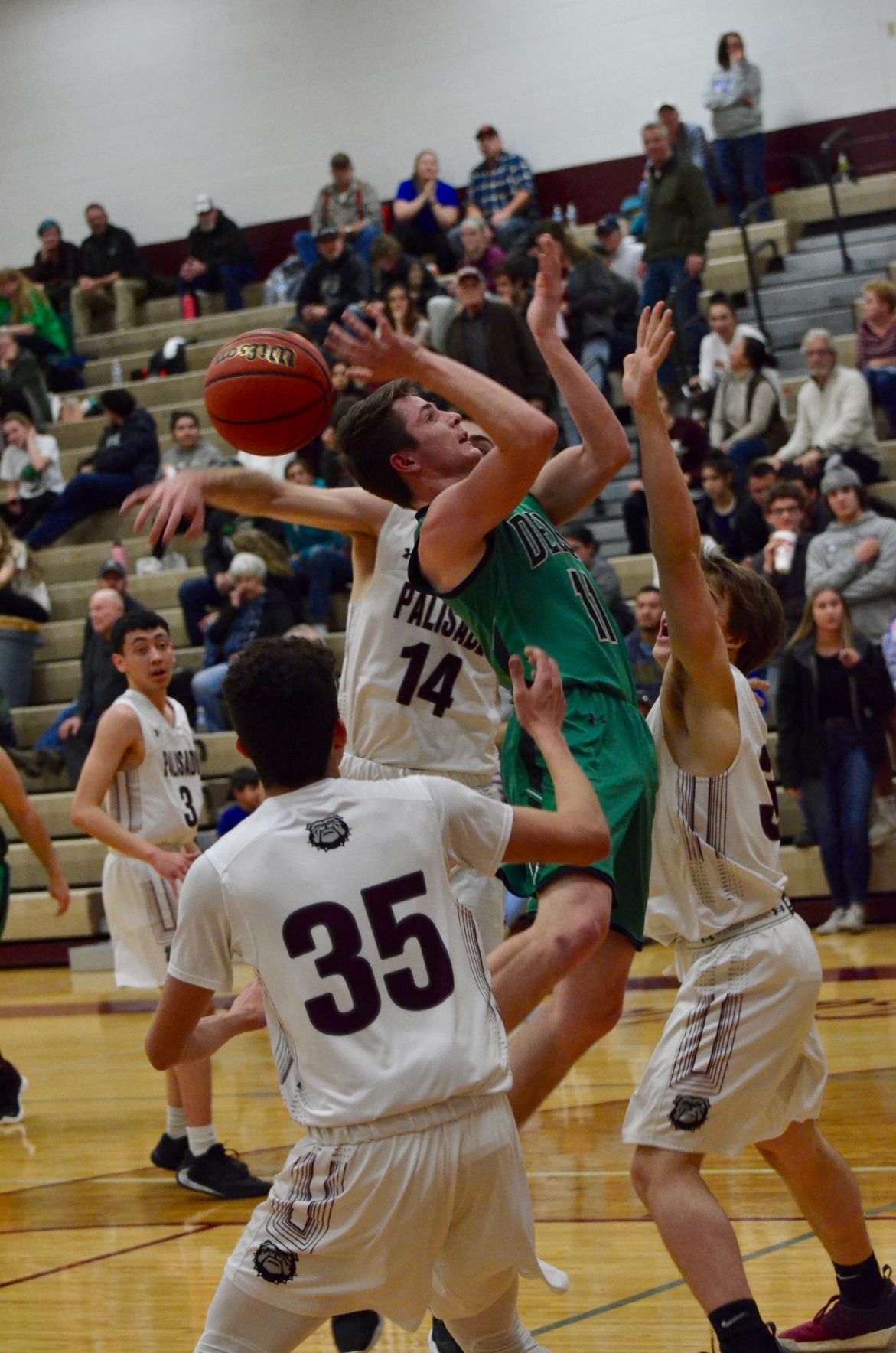 Delta High School senior Hunter Hughes has the ball knocked out of his hands after a drive into the middle of Palisade High School defense. Palisade used a strong third quarter to carve out a 58-43 non-conference win in Palisade on  Jan. 28.

Delta High School senior Hunter Hughes has the ball knocked out of his hands after a drive into the middle of Palisade High School defense. Palisade used a strong third quarter to carve out a 58-43 non-conference win in Palisade on  Jan. 28.

The high flying Delta High School Panther girls high school basketball team won its eighth straight game on the road against Palisade High School, 69-36, on the evening of Jan. 28. Delta's girls were 10-3 following the win. The Panther boys began their evening with an 8-0 lead in the first quarter but hit a cold streak to finish the quarter trailing by three, 15-12, and eventually lost 52-43 to the Bulldogs.

Against Palisade, a torrid pace in the first two quarters generated 25 points in each period to send Delta's girls to halftime with a 50-21 lead. The Panthers pressure defense created numerous turnovers for Palisade's offense and the young Bulldogs were unable to recover the rest of the way with Delta's reserves seeing plenty of action in the second half.

Junior Keely Porter scored 14 points for Delta, including a six-point effort in the first quarter and a five-point finish in the fourth. Senior Haylin McCulloch finished with 11 points and sophomore teammate Erika Kuta added another 10 counters. Palisade's Alexis Marushack paced the Bulldog attack with 11 points and Elizabeth Hawkins had seven.

The Panthers got off to a quick start agains Grand Valley on Friday with Alexa Huff scoring eight of the Panthers' 16 points in the first quarter. Scoring tapered off in the second quarter and Delta took a 22-21 lead to its locker room at halftime. A 22-18 run for Delta in the fourth quarter made the final score 52-47. Huff finished the fourth quarter with seven points to give her 20 points in the game for Delta. Taygann Shoeppner had 10 points to lead the Cardinals.

A quick start for Delta's boys in Palisade fizzled near the middle of the first quarter and the Bulldogs managed to ease their way to a 15-12 lead after the opening period. The turning point in the game came in the second quarter where Palisade put together a 15-9 run and a 30-21 lead for the Bulldogs at the break. Each team scored 22 points in the second half to make the final score 52-43.

Hunter Hughes scored 12 points to lead Delta's offense, including a six for six stint at the free throw line. Junior Evan Baier and senior Felipe Bedoy contributed nine points each in Delta's loss. Kevin Loya led the Bulldogs, and all scorers in the game, with 18 points. Watts Erb finished the game with 11 counters for Palisade.

In Parachute, Delta led by two, 13-11, after one period of play. Hughe, a senior at Delta High School, was injured in a collision which resulted in an ankle injury that sidelined Hughes from the second quarter on. Though Grand Valley outscored Delta by three in the second quarter, the Panthers held a 23-22 lead at halftime. The real damage came in the third quarter where Grand Valley put together a 19-7 run which was unsurmountable the rest of the way.

Delta was at home against Cedaredge on Tuesday, Feb. 4. The Panthers will finish the week against Moffat County in a home game on Friday, Feb. 7, with preliminary games beginning at 3 (JV boys) and 4:30 p.m. (JV girls) with varsity games set for 6 (girls) and 7:30 p.m. (boys).