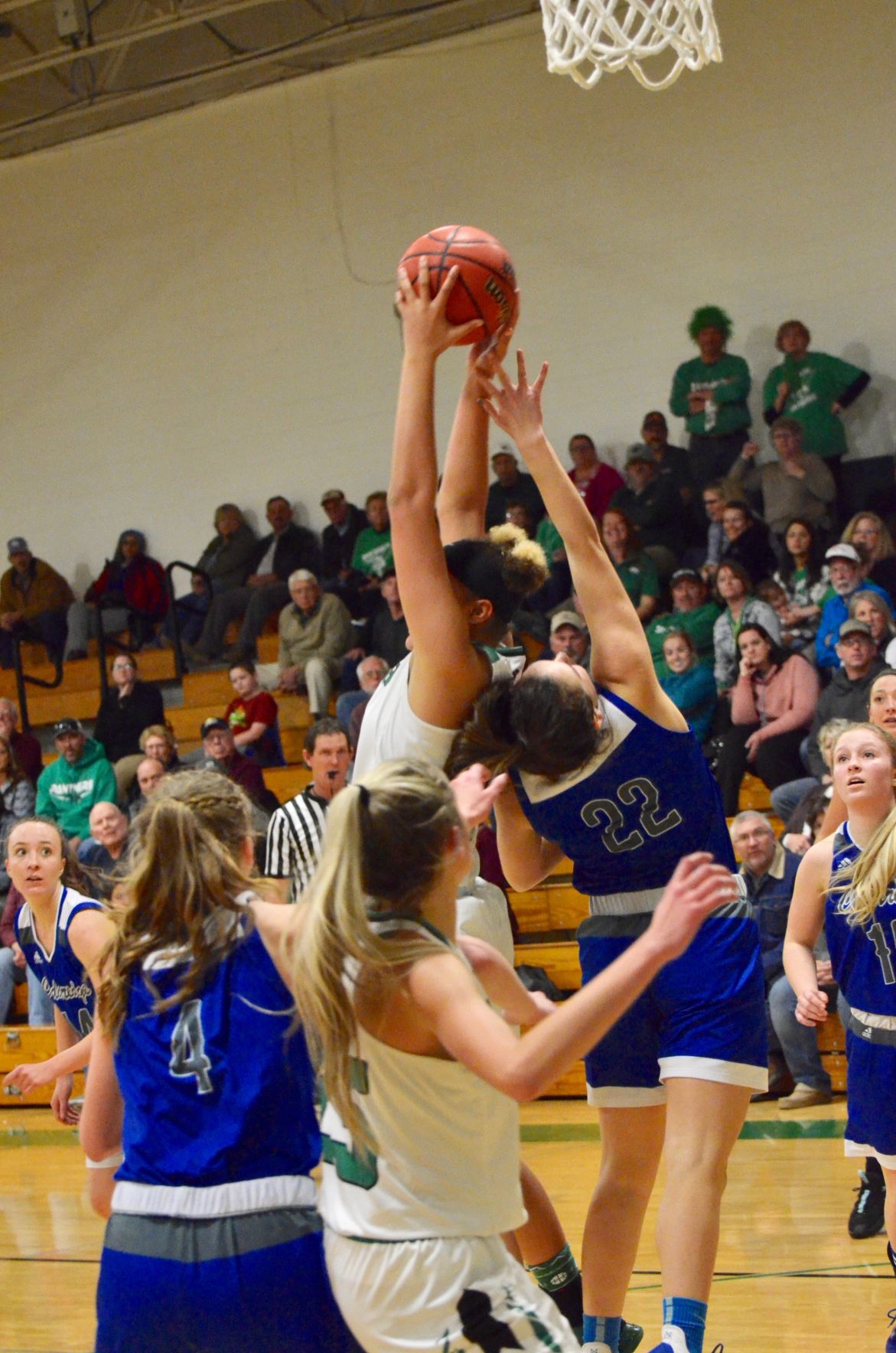 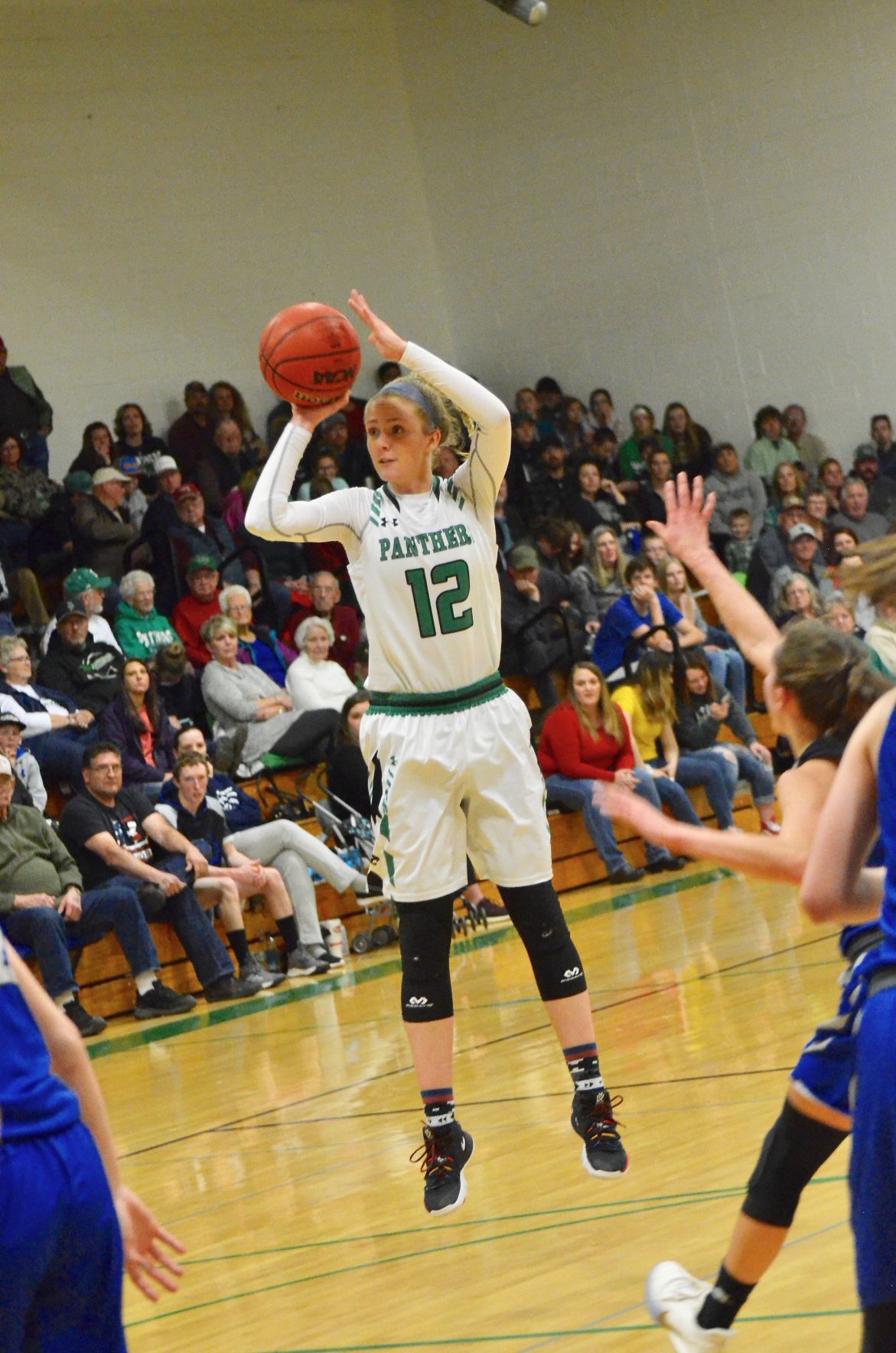 Delta High School senior Sara Geddes scores two of her game-high 19 points against Moffat County on the night of Feb. 7. The Panthers found their offense in the 51-29 win in 3A Western Slope League play. 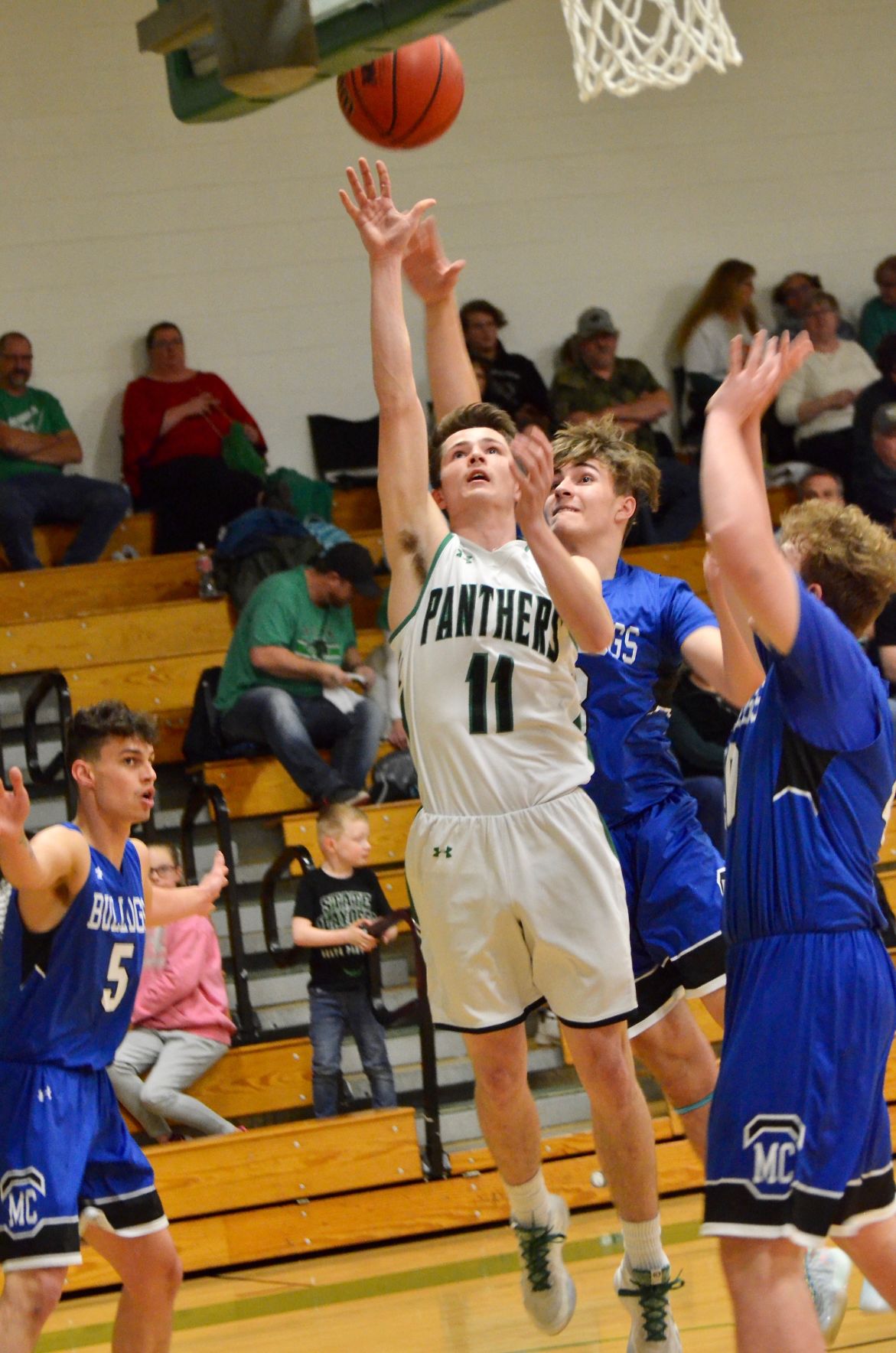 Delta High School senior Hunter Hughes (11) scores two of his game-high 33 points against Moffat County on Friday, Feb. 7. The Panthers had to go an extra period to win the game, 79-75.

Delta High School senior Sara Geddes scores two of her game-high 19 points against Moffat County on the night of Feb. 7. The Panthers found their offense in the 51-29 win in 3A Western Slope League play.

Delta High School senior Hunter Hughes (11) scores two of his game-high 33 points against Moffat County on Friday, Feb. 7. The Panthers had to go an extra period to win the game, 79-75.

Delta High School's basketball teams were challenged on the hardwood this past week with games against Cedaredge on Feb. 4 and on Feb. 7, against Moffat County. Delta's girls team survived a defensive battle against rival Cedaredge with a narrow 33-31 victory, and the boys struggled in the first half against the Bruins but eventually scored 10 more points than Cedaredge in the second half to post a 55-38 win. On Friday, Delta's girls played one of their best games of the season and powered past the visiting Bulldogs from Craig with a 51-29 win. Moffat County's boys had their minds set on an upset against the Panthers, but a great finish in regulation play forced an overtime period where Delta outscored the Bulldogs, 12-8, for a 79-75 win in 3A WSL play.

Delta, following last week's girls games, is sitting atop the 3A Western Slope League with a 6-0 league mark and 13-3 overall. The Panthers moved from fourth to third in the RPI standings with St. Mary's (16-1) and The Vanguard School (13-1) resting in first and second respectively. Cedaredge is 13th in the RPI standings and is second in the WSL with 4-1 and 12-3 records.

In Tuesday's game, neither team was on fire offensively. With similar defensive strategies, both teams worked hard to find scoring opportunities every possession. The score at the end of the first period was 4-4. Second quarter play provided a flurry of action where each team reached double figures in scoring with Delta holding a 12-11 advantage to take a 16-15 lead at halftime. Junior Keely Porter cashed in on two three-point goals and a pair of free throws to score eight of the Panthers' 12 counters. Cedaredge juniors Aspen Furubotten and Kammie Henderson had three and four points, respectively, to lead the Bruins offense in the period.

The third quarter was another defensive stalemate for both teams in a 9-9 standoff. Delta sophomore Erika Kuta was sharp for the Panthers with seven of her team's nine points and Cedaredge had to use the free throw line to stay close with seven of the Bruins' nine points coming at the charity stripe.

Porter finished the game with 11 points for Delta to lead all scorers in the game with Kuta tallying nine points. Cedaredge's leading scorers were Kehmeier and sophomore Megan Gastineau with eight points each.

Friday's contest against Moffat County looked as though it might be another defensive struggle for four quarters as both teams found the orange ring on the backboard an elusive object to put the ball through. Delta did manage to end the first quarter with a 7-4 lead to take some momentum into the second period. With only four points to her credit for the Cedaredge game on Tuesday, Geddes more than made up for the lack of scoring on Tuesday with nine of her game-high 19 points in the second quarter to lead the Panthers on an 18-8 run. The offensive burst sent Delta to halftime with a 25-12 lead.

Geddes and Kuta scored five points each in the third quarter to boost Delta's lead to 21 following a 13-5 run for the Panthers. Delta finished the game with a 13-12 run to make the final score 51-29.

Keely Porter finish with 11 points for the Panthers giving Delta two players with double digit scoring in the game. Moffat County's Halle Hamilton and Em Papierski finished with six points each to lead the Bulldogs' offense.

In boys action this past week, Delta (5-2 and 7-9) opened its Tuesday night game against Cedaredge High School (0-5 and 3-12) with a big 20-6 offensive effort with seniors Evan Baier and Hunter Hughes scoring six and five points respectively. Hughes added another five counters in the second period with teammate Nate Workman adding the rest of Delta's 10 points in the period. Cedaredge junior Jacob Brown scored all seven of his points in the second quarter helping the Bruins earn a 17-10 advantage in the period to finish the first half trailing 30-23.

The Panthers went on to outscore Cedaredge 25-15 in the second half to win the game 55-38. Baier and junior Colbi Braslin had five points each in the final quarter of a 14-9 Panther run.

Hughes and Baier finished the game with 13 points apiece for the Panthers with Braslin scoring 12 and Workman 11. Senior Colby Rupp had 12 points to lead Cedaredge scorers in the game.

Friday night's game against Moffat County was tight the whole way. Moffat County (5-2 and 7-9) kept pace with the Panthers on the strength of Chris Maneotis' six points in the first quarter of a 15-14 Delta run. Delta was paced by Hughes who netted nine points in the opening quarter.

Second quarter play was equally exciting with Moffat County holding an 18-17 advantage in the period to give each team 32 points at halftime. Hughes scored another nine points in the second frame and was well on his way to a career high 33 points.

Moffat County junior Wesley Counts scored 10 points, including six of seven free throws, in the third period with the Bulldogs taking a 53-51 lead on a 21-19 surge. A furious fourth quarter saw the lead change hands several times before Hughes runner tied the game at 67-67 with seconds remaining in the fourth quarter. Delta's defense held on to force a four minute overtime period.