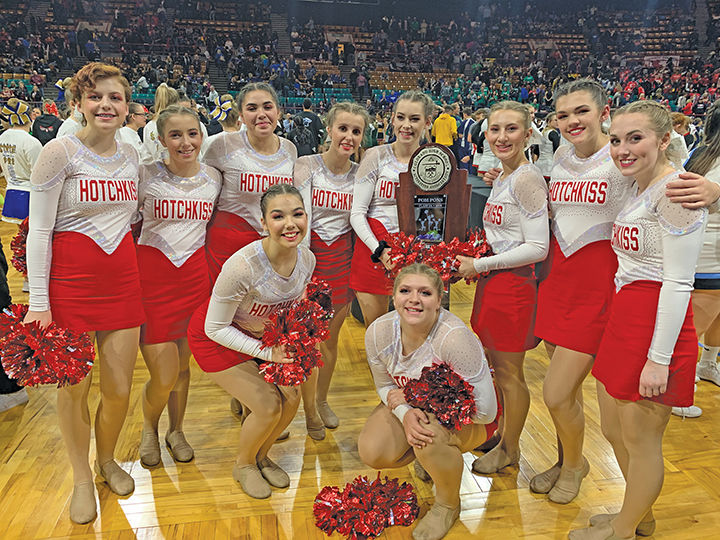 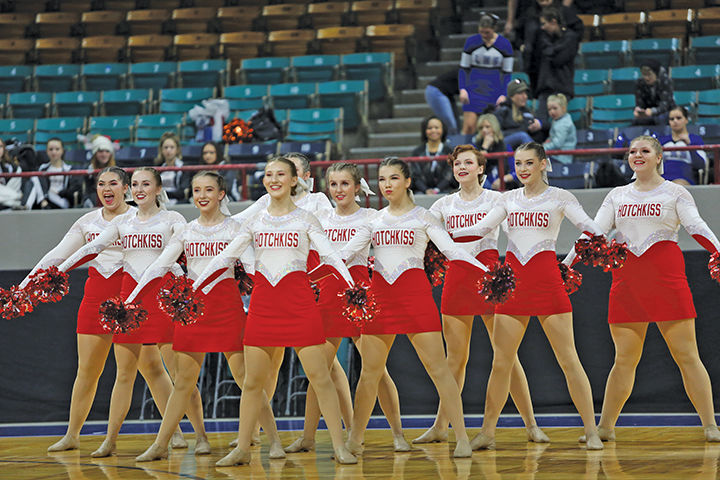 The wonderful expressions on the faces of Hotchkiss High School’s Spirit Team as they competed in this year’s 2A State Pom Championships reflects the feeling and pride which helped the team bring home a second place trophy. 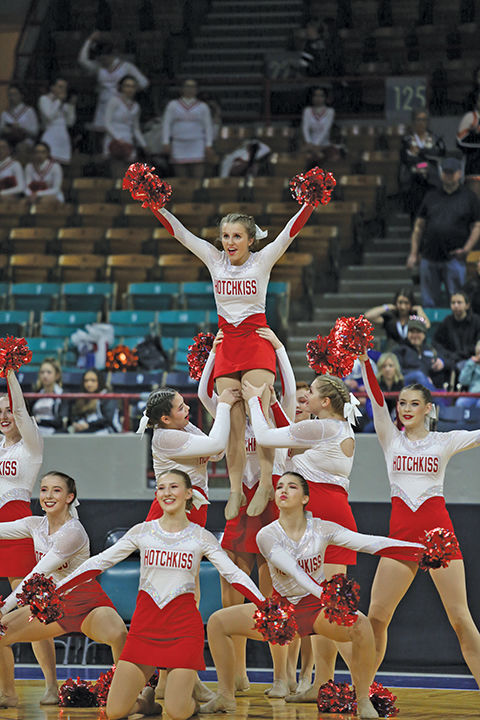 Hotchkiss’ Ravyn Galbreath loves to fly with the help of Teresa Martinez Farley and Paris West during a portion of this year’s routine in the 2A Pom State Championships.

The wonderful expressions on the faces of Hotchkiss High School’s Spirit Team as they competed in this year’s 2A State Pom Championships reflects the feeling and pride which helped the team bring home a second place trophy.

Hotchkiss’ Ravyn Galbreath loves to fly with the help of Teresa Martinez Farley and Paris West during a portion of this year’s routine in the 2A Pom State Championships.

When it comes to who’s got spirit, there’s not many spirit teams better than the Hotchkiss Bulldogs. In fact, there’s only one team that can boast being better after Hotchkiss finished the recent 2A State Pom competition with a second-place trophy. The Bulldogs were a mere 66-one hundredth of a point from winning it all, which might translate to being the best as far as Hotchkiss community members are concerned.

For longtime coach Liz Heidrick, the second place finish was, in her words, “Unbelievable.” Hotchkiss was in the running for a title a year ago but was turned away with yet another second-place finish in 2018.

“Yes, we finished second last year in a close race but it was really close this year. We lost by only .66 of a point,” Heidrick said.

Denied the chance to bring home a first place trophy, the Bulldogs were winners in other ways with senior and one of three team captains Ravyn Galbreath, being selected to the All-State All-American team with Heidrick noting the selection as a really big honor for Galbreath. Also sharing an honor with the community was Heidrick’s award as the recipient of the Virginia Lorbeer Coaches Impact Scholarship Award. The award is given to the coach who has impacted the lives of individuals of the team in many positive ways. Heidrick was humbled, and very pleased to have won the award and gives credit to her team for having written passionate letters on her behalf that were sent to the selection committee, along with the official application for the award, by senior and team captain, Jade Miller. Heidrick’s award included $1,000 for her program which, “helps a great deal paying for uniforms and gear,” said Heidrick.

Heidrick began her coaching experience in 1992 at Hotchkiss High School. There was a period of time where Heidrick stepped aside from her coaching duties and stated she now has a total of 16 years coaching, with 13 of them in Delta County. Heidrick also mentioned she is now a member of the CHSAA State Spirit Committee as a first time member.

Coach Heidrick explained how practices were arranged, beginning with off-season workouts. “We begin each season in the summers with an ‘open gym’ concept. Practices are two hours a day and four days a week,” she said.

There were a few obstacles in finding adequate practice times. “We practice in the mornings and sometimes after other school practices have been completed,” Heidrick said. “We spend a lot of time in gyms and dance studios.”

With irregular practice times creating different atmospheres for practice, the question of how team members feel about distractions from other normal routines such as homework, sports activities and personal life had affected them. For Jolie Derby, her experience with dance competition began as an eighth-grader when she watched the HHS Dance Team perform.

“I’ve always liked to dance and it’s been a good experience every year as I’ve learned more,” she said.

Teresa Martinez’s view of the worth of her experiences through associations within the group were totally positive. “All of it was definitely worth it all. The team becomes your social life and I’ve learned through Coach Liz to be a better businesswoman with skills to handle myself in many situations in life,” she noted.

Gracie Pham’s experience as a Spirit Team member has been, “absolutely great,” Phem said. “Sure, it’s taken time from many things but I could not have learned more anywhere else from my experiences in the group.”

All three young women give credit for their positive experiences to Coach Liz and each of the other team members they have worked so hard with.

Heidrick related a story of the kinds of things the team has had to face throughout the year. A loss to a particular team this past season prompted the need for changes to the team’s routine. A 10-day practice schedule around Thanksgiving time brought added stress to the team. The team worked diligently through the changes and one of Hotchkiss’ victories was against the very team they had lost to earlier in the season. Heidrick had the utmost praise for her team’s efforts and expressed an emotional, “I couldn’t have been more proud of them.”

Hard work and true diligence does pay dividends. Visit Hotchkiss High School to see the evidence in a huge trophy for placing second in the Class 2A State Pom State Finals.