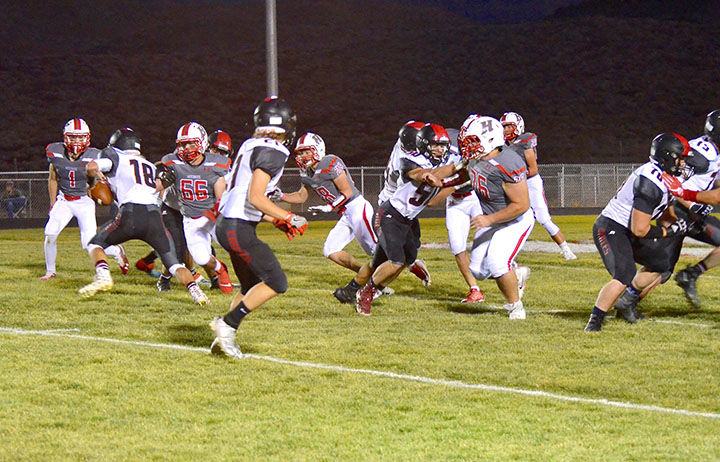 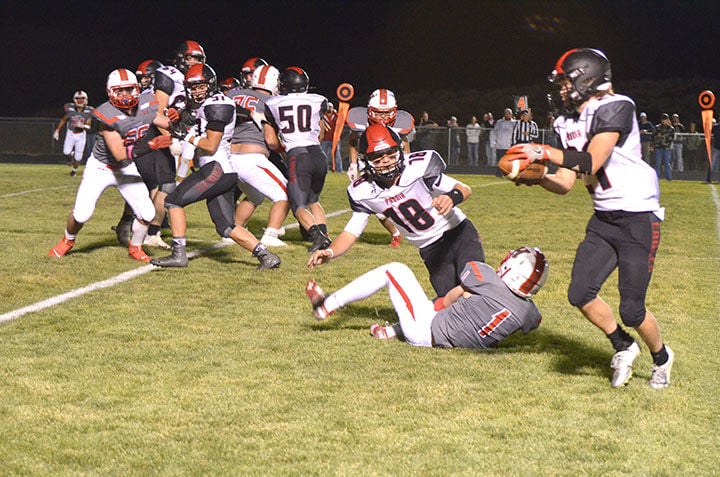 A more perfect night for football couldn’t have been found anywhere. Hotchkiss High School hosted long-time rival Paonia High School in the 20th playing of the North Fork Bowl. Hotchkiss used a rugged defense and workhorse Jace Peebles to carve a 12-7 win Oct. 4. Peebles rushed for 166 yards on 29 carries to keep Paonia’s defense on its toes throughout the defensive struggle. The two teams tested the other’s offense and defense for four quarters with the final result a 12-7 1A WSL decision for the Bulldogs.

The win leaves Hotchkiss trailing in the competition for the North Fork Bowl Trophy, 11-9, over a 20-year period. Paonia began the annual challenge for the North Fork valley supremacy in 2000, with a 7-6 squeaker over the Bulldogs. Last year’s winner, Paonia, won by a 41-0 score and marked a six-year winning streak.

A blocked punt on Paonia’s first offense possession last Friday night, established a pattern of treatment the Eagles could expect the rest of the evening. The blocked punt gave the Bulldogs their first possession on Paonia’s 3-yard line. Two plays later, Peebles scored his first touchdown of the game on a 4-yard run following a 1-yard loss on a Yahir Chavez throw. Saul Cortez’s extra point kick was blocked leaving the Bulldogs with a 6-0 lead with 9:56 remaining in the opening period.

The Eagles started a drive on their third possession from the Paonia 27-yard line. Time ran out in the first quarter with Paonia holding the ball on Hotchkiss’ 15-yard line following a personal foul penalty on the Bulldogs. Paonia eventually moved the ball to the Bulldogs’ 10 before losing possession on downs.

Hotchkiss fared no better on its next possession with a fumble which was recovered by the Eagles on the Hotchkiss 8-yard line. Two runs by the Eagles’ offense placed the ball at Hotchkiss’ 4-yard line. Paonia quarterback Grey Neal fumbled the ball on the next play and had the good fortune to have the ball bounce right back into his arms for no gain. Neal picked up just two yards on a fourth-and-four as the Bulldogs defense stopped Paonia a second time deep in Hotchkiss’ territory.

Hotchkiss moved the ball out of the shadows of its own end zone before punting the ball back to the Eagles for one last possession before halftime. An intentional grounding penalty thwarted an offensive drive by the Eagles and left Hotchkiss ahead, 6-0, at the end of the first half.

Hotchkiss received the ball to begin second half play and the Bulldogs had the ball at Paonia’s 24-yard line before turning the ball over on downs.

Paonia moved the ball from its 24-yard line to the Bulldogs’ 25, with Neal contributing 20 yards on runs of nine and 11 yards on the drive. An incomplete pass ended Paonia’s drive on a fourth down play.

On its next possession, Hotchkiss wasted little time establishing the ground game with Peebles ripping off runs of 35 and 40 yards on consecutive plays to reach the end zone for his second touchdown of the game and a 12-0 lead after a 2-point conversion attempt failed.

Paonia had the ball for the final 50.6 seconds of the third quarter and had the ball at its own 26-yard line to begin the fourth period. Three penalties, two on the Eagles and one on the Bulldogs, marred Paonia’s drive, which stalled at the Hotchkiss 39 and ended on another loss-on-downs situation.

A three-and-out for Hotchkiss on its next possession gave the Eagles another opportunity. Neal and company found some rhythm on a 13-play drive, including four passes for 23 yards, which had the ball resting on Hotchkiss’ 19-yard line on a fourth down situation. Neal targeted Jai Petmezas on a pass play which would have given the Eagles a first down, but defensive back Oliver Mendoza knocked the ball away at the last second to end Paonia’s scoring threat.

Paonia’s defense had a second straight defensive stand which forced Hotchkiss to punt with under a minute left in the game. The Eagles began its final possession on the 50-yard line, and on the first play Neal hooked up with Dominic Felice for a 50-yard Hail Mary pass and Paonia’s first and only score of the game. Hotchkiss had a defender in front of Felice and at the last second fell leaving the sure-handed Felice with the reception and six points. Logan Green booted the extra point for a 12-7 deficit with 42 seconds left in the game.

An onside kick attempt created an offside penalty against the Eagles and a 5-yard penalty moved the kickoff back to the 35-yard line of the Eagles for a re-kick. Hotchkiss held onto the ball on the kickoff and used the victory formation to end the game with a kneel-down.

An indication of how close this game was is seen in the total number of yards for each team; Paonia had 262 and Hotchkiss 227. Paonia had the highest number of plays run in the game with 75 and the Bulldogs had 41.

Neal was five of 20 passing for 76 yards and one touchdown for the Eagles. Felice’s 50-yard reception-and-run for a touchdown topped Paonia’s receiving corps with 55 yards on two catches.

Neal had 11 total tackles to lead Paonia’s defense with Felice, Shane Odom and Austyn Norris in on seven tackles each.

Last Friday’s low scoring game had Hotchkiss coach Curtis Hintz somewhat worried at halftime. Both teams were playing high-quality defense with a break for either team possibly being the difference in the game.

“We told the kids at halftime to do what we do and win the second half,” said Hintz. That bit of advice transferred over to defense with a number of big plays keeping the Eagles from extending drives.

Paonia coach Eric Neal was disappointed in the way the blocked punt in the first quarter affected the game. “That has been our MO for part of the season,” Neal said. “Once we have something like that happen, we have a hard time getting back in the game.”

Things are going in the right direction for the Bulldogs with four straight wins following an opening day game against Meeker (non-conference game, 28-7) on Aug. 30. The next time Meeker and Hotchkiss play, Nov. 1, the results will figure in league standings.

Hotchkiss is on the road to Parachute on Friday, Oct. 11, to face Grand Valley’s Cardinals at 7 p.m. Paonia is in Olathe on Friday with a 7 p.m. kickoff scheduled.

Cory post office announces it will close in April