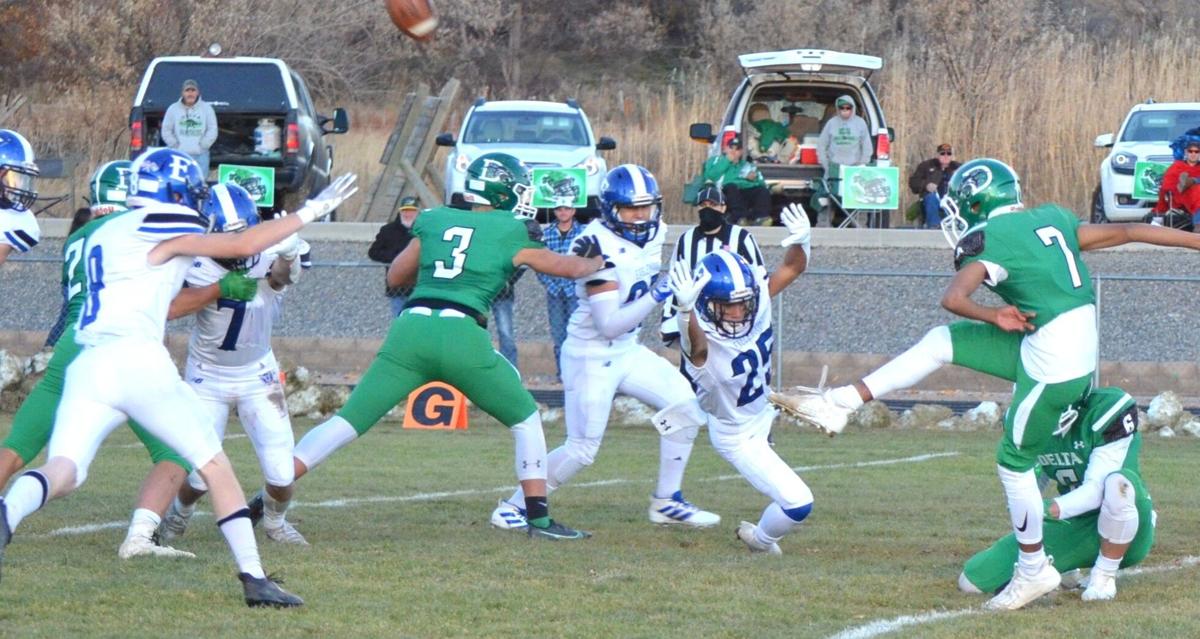 Delta junior running back Timothy Horn (35) breaks through the offense line on his way to a 24-yard jaunt for the Panthers in first half action of a 28-10 2A West League victory. Blocking for Horn were Hunter Goff (29), Jeffery Griffith, Esteban Berrelleza, Colbi Braslin (4) and Treyton Sandoval (79). 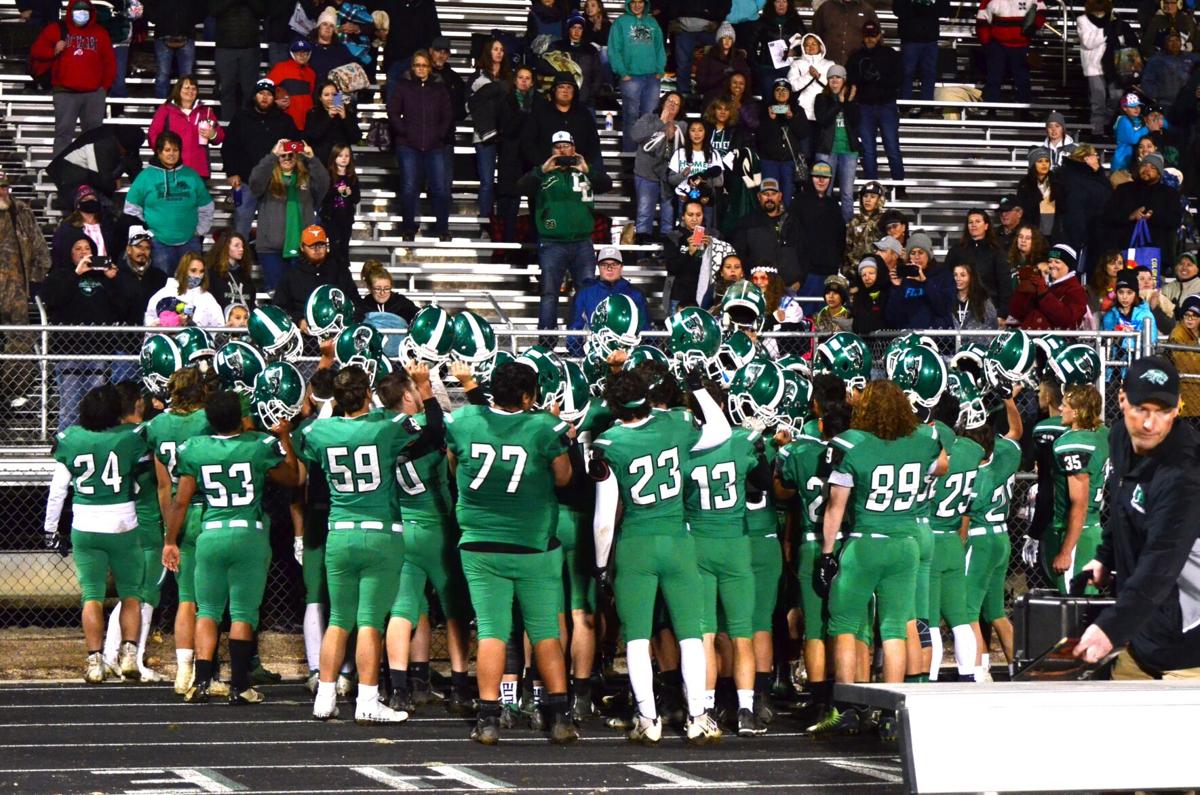 Delta junior running back Timothy Horn (35) breaks through the offense line on his way to a 24-yard jaunt for the Panthers in first half action of a 28-10 2A West League victory. Blocking for Horn were Hunter Goff (29), Jeffery Griffith, Esteban Berrelleza, Colbi Braslin (4) and Treyton Sandoval (79).

Delta High School’s football opponents for last Friday night were the Englewood Pirates, who entered the game 0-3 overall and 0-1 in the 2A West League.

The Pirates used three plays and a punt to end the game’s first possession. A bad snap to Englewood’s senior punter Nate Gravagno spelled disaster, and set the stage for the Panthers with Delta beginning its first possession on the Pirates 35-yard line. The Panthers made short work of the situation by scoring on their first play with senior Nolan Bynum throwing a 35-yard touchdown pass to senior Colbi Braslin down the left sideline. A Jaun Gaucin kick for the extra point made the score 7-0 with 9:23 left in the first quarter.

Play got dicey after that with the Pirates taking advantage of Delta miscues to thwart the Panthers efforts for a second score near the end of the period. A 31-yard run from junior running back Timothy Horn moved the ball into Englewood territory with Bynum hitting Braslin for nine yards and senior Noah Nortnik running for four yards to the Pirates’ 23-yard line. Bynum connected with junior Nate Scharnhorst for 20 more yards to the 2-yard line. Runs by Horn and Bynum were stopped for no gain by Englewood’s defense and the Panthers took a time out to talk about the right play with 3:18 left in the period. The Pirates had a plan of their own and intercepted Bynum’s pass to the right flat and began their next series at Englewood’s 15-yard line.

When the offense sputtered, Englewood gave the ball back to Delta on a punt after three and out and Delta began its next possession on the Pirates’ 41 with an incomplete pass to Braslin to start the drive. Two plays later, Bynum sprinted to his left waiting for Braslin to get open deep down field. Bynum pivoted to make a near-perfect pass to Braslin for a 36-yard gain and in doing so left himself vulnerable to a tackle below the knees that left him writhing in pain. The injury sidelined the Class 2A passing leader for the remainder of the game. There’s no report on Bynum’s condition at this time. Delta High School head football coach, Ben Johnson, said on Sunday that Bynum was to get an MRI on Monday, Nov. 2.

Johnson went on to express his concern for Bynum. “You feel bad for any injury, but Nolan has worked so hard over the years and this year being a senior makes it worse.”

Delta backup quarterback Nate Scharnhorst was called on to guide the Panthers the rest of the way. Scharnhorst’s first play in the game was a 1-yard run to the 5-yard line to end the first period with Delta leading 7-0.

The Panthers found paydirt on their first play of the second quarter when Scharnhorst dashed up the middle for a 5-yard touchdown. A Gaucin PAT kick made the score 14-0 in Delta’s favor with 11:54 left in first half play.

Delta’s ensuing kickoff was returned to the Pirates’ 30-yard line where Englewood began its next possession. The Pirates used a bit of trickery with a reverse-pass play from wide receiver Gravagno to Hunter Labbe that covered 70 yards for Englewood’s first score. A 2-point conversion pass from Gunner Labbe to Gravagno made the score 14-8 with 11:48 left in the first half.

Scharnhorst, and the Panthers weren’t exactly in sync on their next series which began at Delta’s 17-yard line. A holding penalty on the first play set the ball back to Delta’s 9-yard line, and from there Delta was unable to make the first down and Braslin had to punt the ball away.

The Pirates began their next possession on their own 37 and moved to Delta’s 45. The Panthers’ defense stiffened and forced a punt that was muffed by Delta and recovered by Englewood at Delta’s 12-yard line. The loss of one yard on a running play had the ball resting on Delta’s 13 when Gunner Labbe threw an interception to Delta’s Mason Hatter-Hollowwa in the end zone to stop a Pirates scoring threat.

Delta’s next possession began with two plays that were big mistakes, which eventually accounted for Englewood’s last points of the game. Delta had the ball at its own 20-yard line following the touchback on the interception when a center snap sailed over Scharnhorst’s head and was recovered by Scharnhorst at the Delta 11. On the next play, the same thing happened with the ball being recovered by Scharnhorst in the end zone for a safety and two points for Englewood that made the score 14-10.

Gaucin kicked the ball off the tee following the safety and Englewood returned the ball to its own 39 to start its next possession. The Pirates moved the ball to Delta’s 14-yard line before fumbling with Delta’s Braslin recovering it on the Panthers’ 15. Delta moved the ball to Englewood’s 30 using runs of 11 and 16 yards from Scharnhorst and a 34-yard pass to Braslin. The drive stalled out at the 31 and Delta lost the ball on downs.

Englewood’s final possession of the first half failed to produce points and Delta took a 14-10 lead to halftime.

Delta’s second possession of the third quarter highlighted the running of Horn, who finished the game with 16 carries for 139 yards, and Scharnhorst who ran for 77 yards on 12 carries and two touchdowns in the game. Horn ran the ball five times for 23 yards and Scharnhorst had 30 yards on three carries in the drive. Scharnhorst also found junior Hunter Goff wide open for a 40-yard gain in the 10 play, 82 yard drive. Scharnhorst’s second touchdown run of the game came on a 14-yard run to finish the drive with 3:39 left in the third quarter. Delta led 21-10 after Gaucin’s kick for the extra point.

Delta’s final scoring drive of the game came in the fourth quarter on a 66-yard drive that took nine plays. Scharnhorst and Horn were, again, keys to the running game on the drive with Scharnhorst carrying the ball four times for 19 yards and Horn adding another 31 yards on four carries. Scharnhorst finished the drive with a 24-yard scoring pass to senior Noah Nortnik to make the game’s final score 28-10, after Gaucin’s extra point kick.

In the game, Bynum and Scharnhorst combined for 216 yards passing on eight of 12 passing and two touchdowns. Both quarterbacks completed four of six passes with Bynum finishing with 112 yards and a touchdown and Scharnhorst with 104 yards and a touchdown. Coach Johnson acknowledged the fact that Scharnhorst hadn’t received many reps in practice during the week and everyone was rattled a bit. “I felt once we got into the locker room at halftime and put together a limited package for him, he did a great job. He is a very talented young man.”

This week’s practice sessions are likely to contain constant reminders for the Panthers’ defensive unit as Johnson wasn’t pleased with the defense falling for the reverse pass play for 70 yards and a score. “We need to get our eyes out of the backfield,” said Johnson referencing the fact individual assignments were missed on that play.

Braslin was the hot target for Delta’s passing game on Friday with three catches for 81 yards and one touchdown.

Delta’s victory keeps the Panthers in first place in the 2A West League with a 4-0 overall record and 2-0 in league play. Moffat County has moved into second place with its win over Woodland Park this week.

Up next for the Panthers is an important battle with 2A West League foe, Moffat County. The Bulldogs (2-1 overall and 2-0 in 2A WL) have enough firepower to give Delta all it wants in this Friday’s (Nov. 6) battle in Craig at 6 p.m.

Johnson will be constantly reminding his team of the importance of this week’s game. “Since Moffat County upset Woodland Park, this week’s game becomes a really big game.”