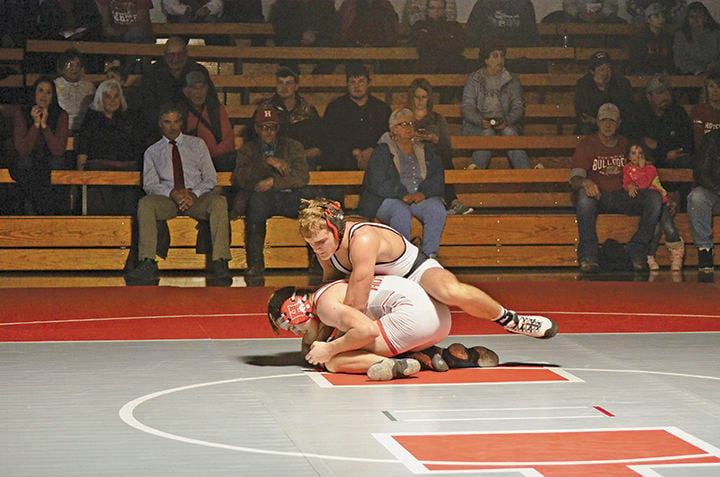 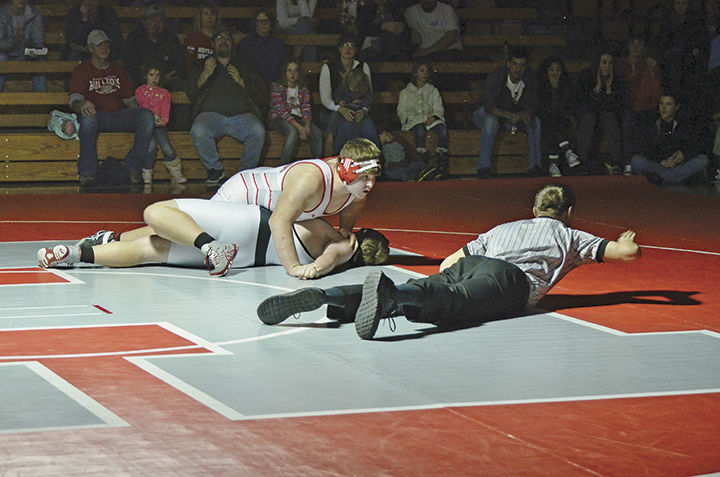 Hotchkiss heavyweight Christian Matus looks at the referee as he prepares to slap the mat signaling a pin for Matus over Paonia’s Malachi Deck. Matus’ pin wasn’t enough to bring the Bulldogs back in a 42-36 Paonia win in Hotchkiss.

Hotchkiss heavyweight Christian Matus looks at the referee as he prepares to slap the mat signaling a pin for Matus over Paonia’s Malachi Deck. Matus’ pin wasn’t enough to bring the Bulldogs back in a 42-36 Paonia win in Hotchkiss.

On Jan. 16, No. 4 Paonia High School and No. 9 Hotchkiss frolicked through a dual encounter in Hotchkiss. Both coaches, Duff Seaney (Hotchkiss) and Nate Wiggins (Paonia) had smiles and a chuckle for how the evening’s mat competition had progressed. Seaney was all smiles and had a twinkle in his eye during a post match interview.

“I just love duals. They are so important in this sport,” he said. “Both teams were so psyched up. Bumping weights like we did you take a chance. I felt like we wrestled really, really well. Some guys saw different guys they always wrestle and I thought we could sneak up on them to help us win a dual. It didn’t work out this time. It was so much fun.”

Seaney’s counterpart in the match acknowledged the great competition from the Bulldogs.

“I think you’ll see maybe five teams out of this region move on to regionals. Hotchkiss has some good athletes with a good junior class,” Wiggins said.

The bumping weights Seaney spoke of following the 42-36 win by Paonia, brought a quick smile from Wiggins when asked about the ploy of bumping wrestlers just before some matches began.

“It’s a chess game,” he said. “When you see where guys weigh in, you take advantage of some who are over to try and get as many pawns as possible to try and win a dual.”

Paonia had the advantage this time around with its come-from-behind 42-36 win. The Bulldogs opened with a forfeit win for Alexis Church at 106 and maintained a narrow 6-3 lead after Paonia’s Ace Connoly scored a 6-4 decision over Anthony Scanlon in the 113-pound match. In the 120-pound match, Robert Cochran gave Hotchkiss a 12-3 lead with a fall over Trey Bejarano. Paonia picked up six points at 126 when Jason Kunz won by forfeit. The Bulldogs’ Drayden Taylor scored a first-period pin over Paonia’s Atley Harris at 132 to stretch Hotchkiss’ lead to 18-9.

A forfeit for Reagan Todd at 138 moved the Eagles to within three, 18-15. Mordecai White’s pin over Logan Farnsworth in the second period bumped Hotchkiss’ lead back to nine at 24-15. JD Miller, wrestling at 152, suffered a loss against Paonia’s Zeb Etter cutting the Bulldogs’ lead to 24-21.

Hotchkiss junior standout Traycer Hall, who normally wrestles at 152, was pitted against Paonia senior standout Grey Neal in the 160-pound match. The two athletes treated fans to a good match with Neal leading 6-2 entering the final period. Hall scored four points on a reversal and a near fall in the third period, and Neal’s reversal was needed to preserve an 8-6 decision to tie the match at 24-24. Shane Odom scored a second period pin over Ethan Guy in the 170-pound bout to put Paonia ahead, 30-24.

The 182-pound bout featured Hotchkiss senior Jace Peebles and the Eagles’ Trenton Gaston. Peebles pinned Gaston in the first period to tie the match at 30-30. Austyn Norris used a second period pin to nudge the Eagles back in front, 36-30. A forfeit for Anthony Miller at 220 pounds gave the Eagles a 12-point lead. In the final bout of the evening, a pin by Hotchkiss heavyweight Christian Matus, over Malachi Deck, made the final score 42-36.

Paonia was in Eads on Friday, Jan. 17, where they wrestled Peyton’s Panthers. After five forfeits in the match, neither team could pull away from the other with a final score of 42-42.

In tournament action on Saturday, Jan. 18, the Eagles finished second behind Peyton in the team title race. Peyton finished with 183 points and the Eagles scored 131.5. In all, there were 13 teams vying for the team title.

The Eagles will have their Paonia Duals scheduled for Friday, Jan. 24, at 6 p.m. and then entertain teams on Saturday in the annual Screamin’ Eagles Tournament beginning at 8:30 a.m.

Preparing for a new year of gardening