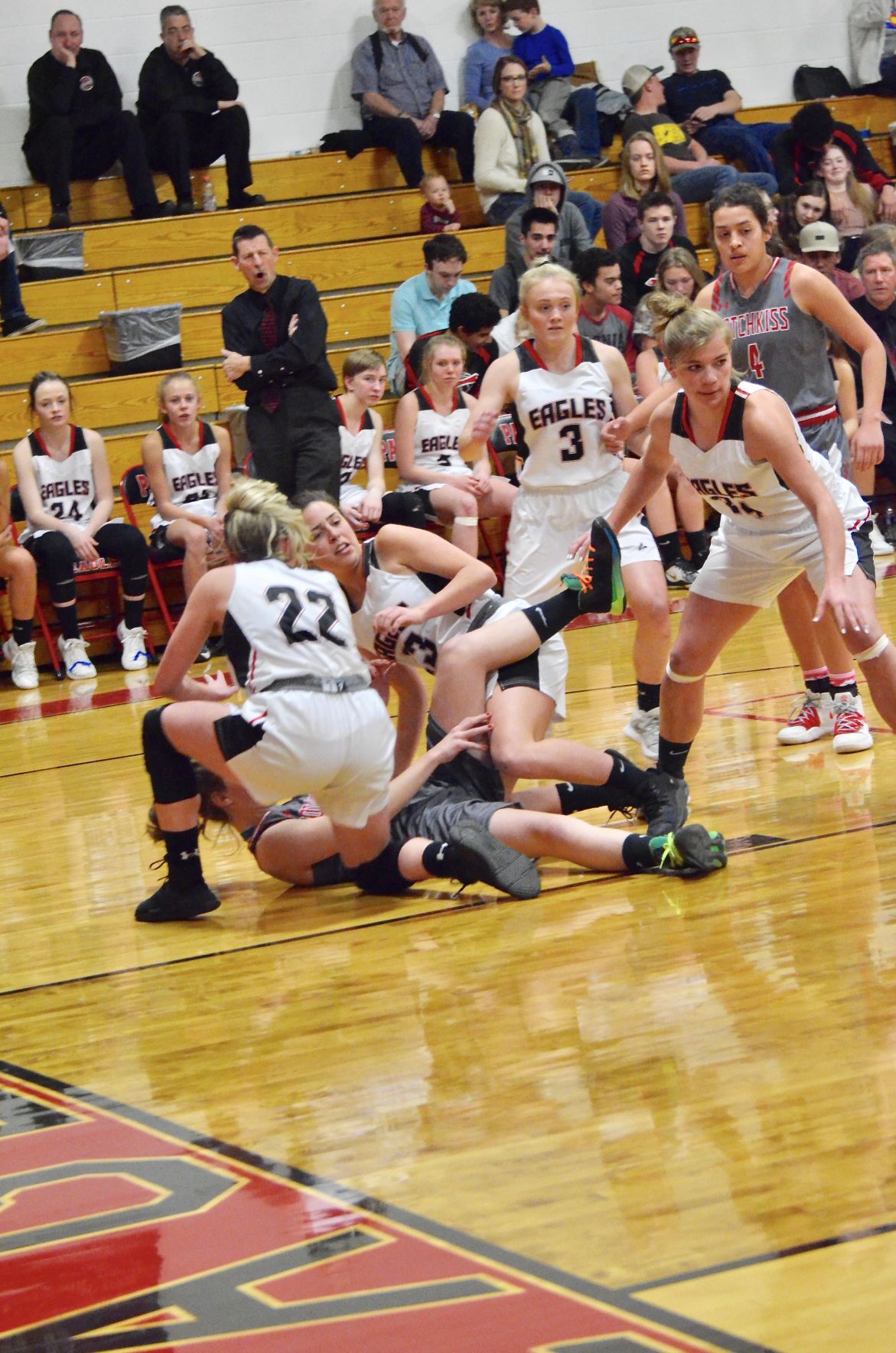 Paonia High School played an aggressive defense in 2019-20 with four of Paonia's five defenders scrambling for the ball in this photo. On the floor for Hotchkiss High School, is freshman Lexi Todd, who is surrounded by Eagle defenders, from left to right, senior Paige Fister (22), freshman Payton Fister (13), junior Tawny Roberts (3) and junior Taneal Mautz (34). 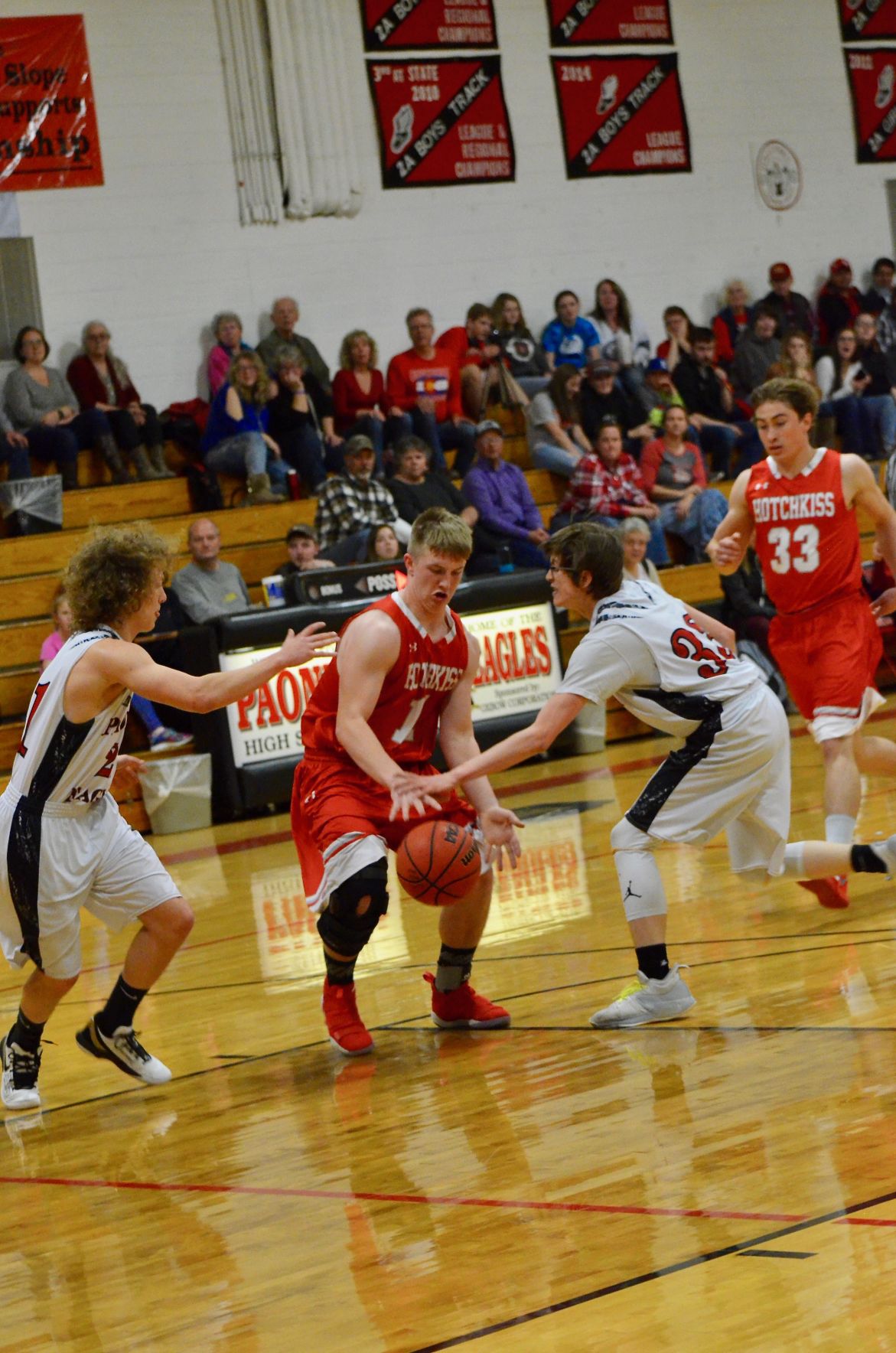 Paonia High School played an aggressive defense in 2019-20 with four of Paonia's five defenders scrambling for the ball in this photo. On the floor for Hotchkiss High School, is freshman Lexi Todd, who is surrounded by Eagle defenders, from left to right, senior Paige Fister (22), freshman Payton Fister (13), junior Tawny Roberts (3) and junior Taneal Mautz (34).

The 2019-20 basketball season has been a work in progress for both the girls and boys teams at Paonia High School. The untimely medical intervention for head girls coach Scott Rienks has certainly impaired the success for this year's team, but, growth has been evident as the season continued in Rienks' absence. Under the guidance of John Blair, Ce'rra Carsten and Brian Mitchem, Paonia High School's girls have battled the emotional strain and their opponents to complete the 2019-20 season with a 5-6 record in the 2A/1A Western Slope League and finished the season with a 10-13 overall record following last week's play leading to District 5 tournament competition in De Beque.

For the boys, Tim Esgar also felt some of the pressure in a tough 2A/1A WSL boys division. The Eagles failed to make the post season playoffs after losing two of three games in last week's District 5 tournament action. Paonia finished fourth in the 2A/1A WSL with a league mark of 7-5 and 11-11 overall.

Paonia's girls began the week with a pigtail play-in game against tenth-place Caprock Academy on Feb. 24. Paonia's defense set the tone for the game in the first quarter with an 18-0 start. The Eagles allowed four points to be scored in the second quarter and took a 34-4 lead to the break. Paonia allowed just two points in the second half of play and cruised to a 48-6 win.

On Feb. 25, Paonia faced No. 2 league foe, Hotchkiss, for the third time with the same result as the previous two matchups. Hotchkiss controlled the game to forge a 49-37 victory (see Hotchkiss hoops story in today's Sports section).

The loss to Hotchkiss sent Paonia to the consolation side of the District 5 tournament bracket where they were matched with No. 6 Rangely (7-4 and 13-8). The Eagles, with a 5-6 and 10-13 overall record, finished sixth in league play. A 34-29 win on Feb. 27, extended Paonia's season to a fifth-place game on Saturday, Feb. 29, in De Beque. The Longhorns, No. 8 in league play, had a good night from their offense and came away with a narrow 30-23 win to eliminate Paonia from further play in post season. West Grand enters this week's regional competition as the No. 24 seeded Mustangs are schedule to play the No. 5 seed, Fowler (20-2) on Friday, March 6.

With a possibility of reaching the post season playoffs, Paonia's boys began the week as the league's No. 4 seed and were scheduled to play No. 5 Vail Mountain (7-5 and 12-9) on Feb. 25. The Gore Rangers spoiled Paonia's hopes for a District 5 title with a 42-37 win. The Eagles fell behind by four after one period but held on to trail by just one, 12-11, at halftime. A nasty third quarter boosted Vail Mountain's lead to 26-14 after three quarters of play. Paonia's comeback effort was five points short in a 23-16 fourth quarter. Senior Landon Thliveris had 11 points to lead Paonia scorers and junior Braden Lewis finished with seven points